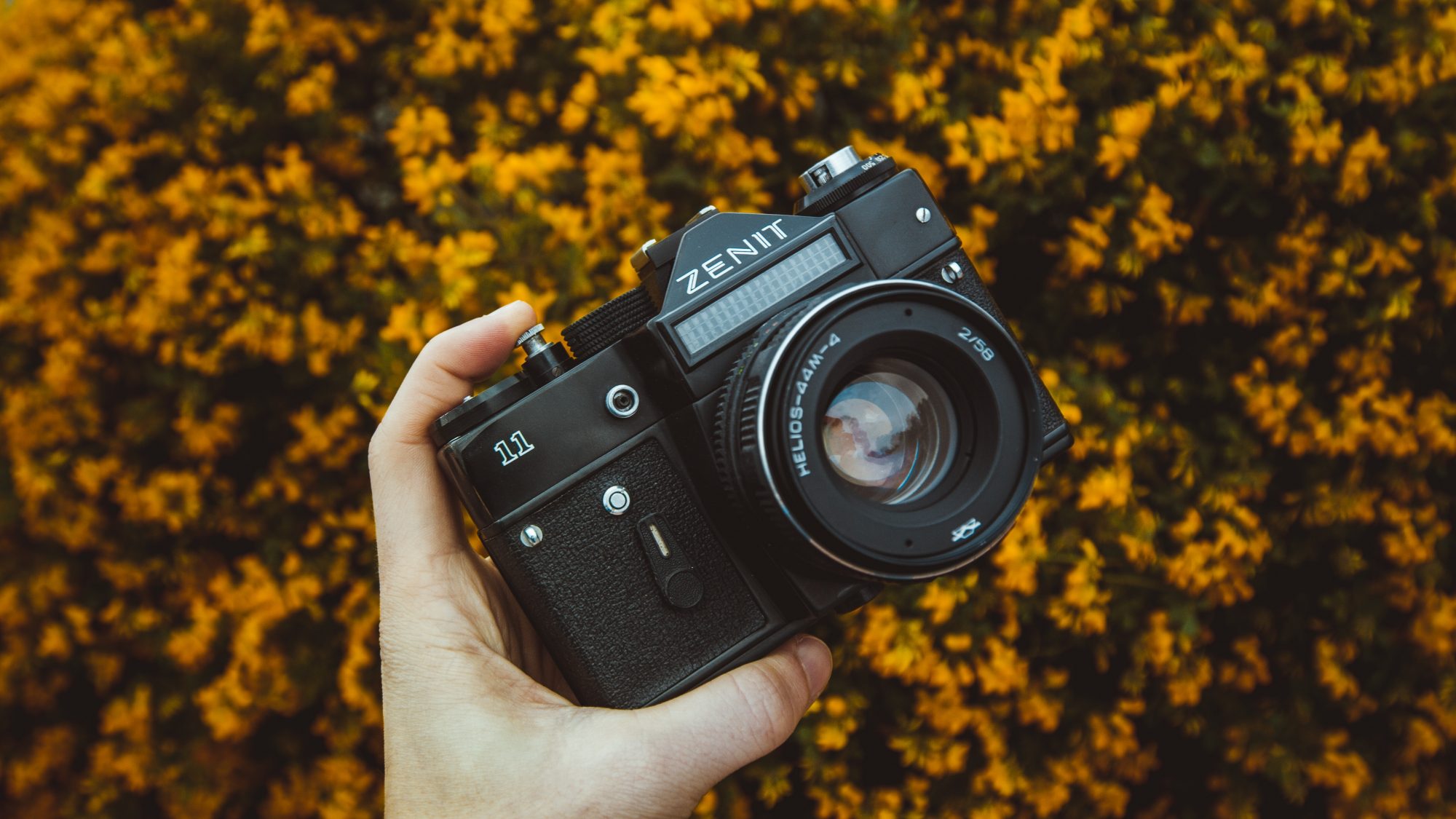 The Soviet Union had the world’s second-biggest camera industry during the Cold War, but only a handful of its cameras were widely known in the West sat the time.

Cheap and cheerful Zenits and Zorkis were exported far and wide, no-frills SLRs and rangefinders robustly built and with a pricetag which made up for their lack of sophistication. But this was just the tip of the iceberg. Many Soviet camera designs were never exported: more secrets to be hidden from prying eyes behind the Iron Curtain.

When I properly got into film photography in 2000, one of the first cameras I bought was a LOMO LC-A, by then already a cult camera in the West thanks to the LOMOgraphy movement. The humble LOMO (which still works as well as it did the day I bought it) got me intrigued as to what else might have been made in the USSR’s camera factories.

The Soviet Union’s designs indeed span far more than the Leica knock-off Zorkis, bare-bones Zenit SLRs and the crudely charming LOMO compact. There were innovative designs like the Kiev SLRs with their fan-shaped shutters; the stylish Voskhod 35mm camera; the pro-spec Start SLR and the Leningrad rangefinder, as well as cheap plastic viewfinder cameras churned out in million after million. The received wisdom was that the Soviets were good at copying simple Western designs but not a lot more – the truth has turned out to be a lot more complicated.

Thanks to eBay and the blogosphere, the more esoteric Soviet designs are no longer a mystery: you can buy them in flea markets and camera shops from Moscow to Manchester. And in the 21st Century a lot of these cameras are being dusted off and used again. Kosmo Foto definitely isn’t the only one interested in them.

Here you can find all the Soviet-related posts on Kosmo Foto. And if you’re a Zorki zealot, FED fanatic or LOMO lover, drop me a line at foto.dowling@gmail.com – I’m always looking for more posts, and every one published earns you two rolls of Kosmo Foto Mono film.

Soviet camera history
The humble Soviet camera that made it to the top of Mt Everest
Soviet-Chinese camera collaboration: An introduction
This rare Soviet camera prototype could sell for $80,000
Dial M for mock-up: Late-model fake Leicas
Younger than Facebook: The last Zenit film SLR
The rare Soviet camera took colour pictures before colour film
These are almost all the cameras LOMO produced over seven decades
The Moscow Olympics commemorative cameras
The flea market Zorki with a special secret
The Soviet camera disguised… as another camera
The Soviet camera owned by the man who shot JFK
The Zenit-E that served on a space station
A Soviet time capsule from the 1950s
These are the most produced 35mm cameras of all time
The LOMO LC-A built to fool a Soviet general
A strange homemade Soviet stereo camera
The stash of Soviet cameras found in a Kazakh warehouse
Fancy owning a camera from a Soviet MiG?
The camera from a clash which could have sparked World War III
The fake Nikons and Canons made for Soviet movies
The LOMO LC-A family

Around the World in 80 Cameras
Christchurch, New Zealand on a Kiev-60

Tips, tricks and repairs
Hacking a half-frame lens for wide-angle photography
Zenit-16: the Russian revolution that never quite happened

Shooting with Soviet gear
Life as a Covid patient in Kazakhstan, captured on film
Kosmo Foto Mono on a Kiev-60
The Lubitel 166B: My grandfather’s camera
Shooting the Kiev-60 and Arax-60 MLU
Hunting dragons with KMZ Fotosnaiper
KMZ Narciss: Shooting the ‘world’s smallest SLR’
An xpro Easter on Zenit SLRs
Studio shooting on the Kiev-88
Zenit-E sampler
Greenwich on a KMZ Start
A Soviet Start in Soho
Zenit xpro: Greenwich and Whistable
Xpro in Antwerp
A Paris daytrip on film
Chinese New Year on film
LOMO LC-A review
Agfa Precisa on London South Bank
Publicity portraits on a Kiev-60
Summertime drinks on a Zenit-3M

Can I whinge a little here? Really excited to find this sight as I cut my teeth on a Practika TTL, Voigtlander Tessar, Zenit enlarger kit and a Zenit standard 8 movie camera. Currently own a Zenit EM, Voigtlander CL, Olympus OM40 and two Agfa Stillette 120 format cameras. I ordered and received rolls of 35mm film from you and I look forward to testing them out. First thing. Don’t ‘they’ make lens adapters for bayonet mounting lenses to fit M42 so i can use my large collection of, say OM lenses on my Soviet cameras? I have tried in… Read more »

Thanks for the message, Denis. Yes – it’s easy to get adaptors for M42 to other mounts but rather different when it’s the other way around. My hope is the new generation of makers can fix this with 3D-printed parts. And yes, gone are the days of getting a Helios for £5 – digital photographers and especially film-makers have discovered them. The stepless aperture makes them perfect for filming.