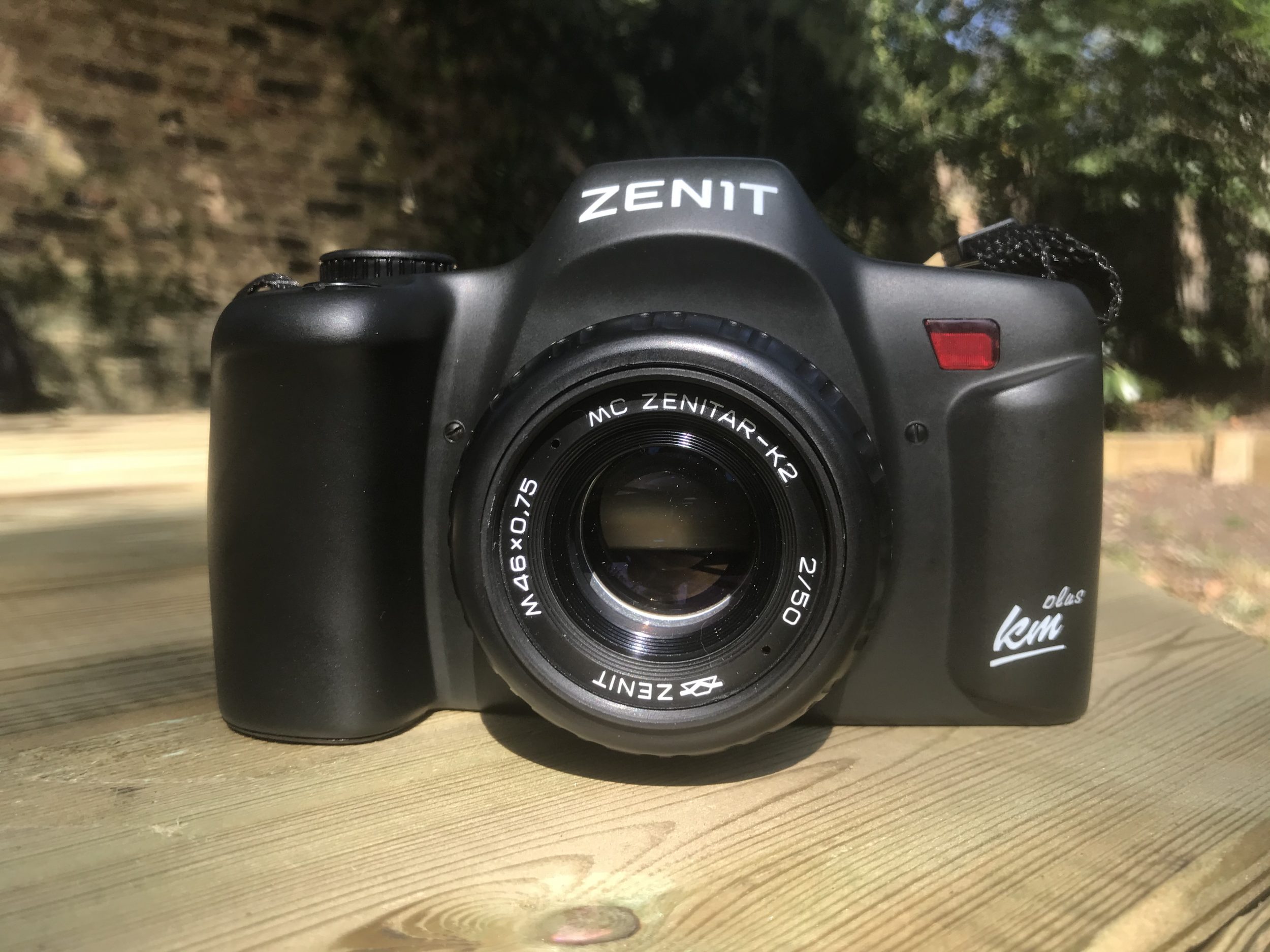 Few camera brands have the Cold War cachet of Zenit.

The SLR brand of the huge Krasnogorskiy Mechanicheskiy Zavod (KMZ) on the outskirts of Moscow, the Zenit name was etched, stamped and printed on millions of SLRs from the early 1950s up until the fall of the Soviet Union.

The fall of the Soviet Union… and beyond. Not everyone in the former USSR had the money to suddenly spend on Nikons, Leicas and Hasselblads. Sturdy and simple Zenits still had their place, and KMZ entered this new age of post-Soviet capitalism with new designs at bargain-basement prices.

The M42-mount Zenit line which had begun with the Zenit-E in 1965 was still in rude health, both at KMZ and at the MMZ camera plant in Minsk, now the capital of Belarus. In 1977, the Zenit-TTL brought though-the-lens metering to the basic Zenit-E chassis, and spawned a line of cameras just as successful. In the 1980s, the TTL morphed into the tank-like Zenit-12XP and then the plastic-heavy Zenit-122 in 1990.

All these Zenits were essentially the same camera below the skin; a TTL-metered SLR with manual focus and a cloth shutter and shutter speeds from 1/30 to 1/500; it also had a meter sensitive enough to shoot ISO 400 film on (but not much beyond that).

These specs were nothing to really write home about when the TTL was introduced in the late 1970s, but by the early 1990s they were decidedly old hat. But still, KMZ found new frills to add on to the basic design. The last iteration of the Zenit-TTL family, the Zenit-412LS, only went into production in the year 2000. (It’s 21st Century feature? Automatic DX encoding.)

But this unspectacular family wasn’t the only Zenit SLR family to stay in production during the 1990s and 2000s. This family boasted metal shutters, and a fastest shutter speed of at least 1/1000. The first in this more advanced Zenit line was the Zenit-19 of the late 1970s. The Zenit-19’s somewhat unrefined finishing took away from what was a pretty impressive camera (I took one with me on a trip through Russia in 2004, and it didn’t miss a beat). This family initially started out with the M42 mount but then started using the Pentax K bayonet midway through the 1980s.

This family didn’t die with the end of the Soviet Union either, In fact, the last of them – a chunky, rounded SLR screaming Eighties design touches – only started production in late 2004.

Put it this way: the Zenit-KM Plus is younger than Facebook and the Nintendo DS, despite looking like something that could have been cooked up in the days of the Sony Walkman and the compact disc.

It’s a big, bulky SLR with a smooth, rounded body similar to the kind of cameras Canon and Minolta were coming out with a decade-and-a-half before. Of course, by the time the KM Plus was released, the era of the film SLR was almost over; pros and enthusiastic amateurs were trading in their film SLRs for the first generation of DSLRs. The KM Plus might just be the last manual-focus SLR to come into production.

I’ve been a user-collector of Soviet cameras for 20 years; I’ve got a reasonably good grasp of the major camera designs and which camera makers survived the chaos of the 1990s and still managed to churn out film cameras during it. But even I had little idea of just how long Zenit churned out two separate families of manual focus SLRs until I sat down and combed through listing on USSRPhoto.com and KMZ’s own historical archive. The KM Plus replaced the very similar KM released in 2001 and in production for around three years; it was plagued with a series of production issues, requiring KMZ to come up with a whole new model to try and wrestle the gremlins.

Put together, some 15,000 KMs and KM Pluses were made until KMZ called an end to film camera production in early 2005. Compare that to the millions of Zenit-Es that rolled off the KMZ production lines over nearly two decades. Unsurprisingly, they’re not a common find. But occasionally they pop up on eBay, usually from sellers in the former USSR.

A few weeks ago, a KM Plus came up for sale on eBay, from a seller near Moscow. The camera was not only boxed but… had never been used. The seller had only opened the box in order to take a picture of its contents, which were exactly as they would have been when the camera left the factory. Including postage from Russia, it cost £80. You can imagine what happened next; it features eBay’s “Buy It Now” button in a starring role.

The KM Plus arrived last week, encased in a box sporting what looks like speedway riders zooming over an ice course – not the kind of thing that adorned Soviet camera boxes, it’s fair to say. Inside was the camera, sealed inside a plastic bag, with another sealed bag containing a camera strap and attachments, a zippered camera bag, a Russian-language instruction manual and a factory passport, a hangover from the Soviet days when each camera would be stamped out of the factory and its details noted in pen; there’s even the signature of the person who signed it out of the factory. The Date of Issue for this camera is 24/3/08 and the shop stamp (“штамп магазина”) the 22/7/11. This camera must have sat in a KMZ storeroom for some six years before it left the building, and another nine before it was parcelled up for the trip to England.

The KM Plus comes with an MC Zenitar-K2 50/2 lens, a plastic-barrelled 50mm standard lens that feels like it’s a reiteration of KMZ’s superb Zenitar-M 50/1.7 lens. It has a very decent reputation.

The KM Plus  has a fastest shutter speed of 1/2000 plus an aperture-priority setting which chooses the right shutter speed depending on the chosen aperture. All this is obviously pretty power hungry, so the camera requires four AA batteries to function. They’re also needed for the film rewind; there’s no rewind crank on this Zenit.

The Zenit’s chassis is a monster of ABS plastic, with a pronounced handgrip on the righthand side. It’s bulky but streamlined; there’s a shutter speed selector, rewind button and self-timer and an electronic frame counter in blazing red that looks like something off Kit from ‘Knight Rider’ dashboard. And that’s it. Inside there’s a little more complication – a sensor which reads the DX coding of the film (I don’t know what happens with films like Kosmo Foto Mono which don’t have a DX sticker) and the film take-up spool, which is motorised.

I took the KM Plus out for a photowalk this weekend and will report on how it shoots in a later post, but this much can be said; few cameras I’ve shot with are quite this loud. The film advance grinds and roars with all the subtlety of a MiG engine starting up and the rewind…well, if you don’t want to draw attention to yourself, you might want to consider doing this in the safety of a soundproofed room.

I got to use one of these cameras close to 20 years ago. I loved the lens. I like the fact that it had all the extra shutters speeds , but was not crazy about the automation part.

>Not everyone in the former USSR had the money to suddenly spend on Nikons, Leicas and Hasselblads. if we just ignore the availability of money, USSR was an isolated place, nobody could go to store, or order Nikon via catalog or somehow. Even if one had enough money. Which they would not have unless they are in the elite/nomenclature/shadow business/etc. The real exchange rate for USD had no connection with the reality, and if we convert salaries to USD, they would be extremely low, more or less, depending on time. Even jeans were hard to find, and using those was… Read more »

Nice write up. I have an E and a KM plus (new old stock w/ box, bag, instructions, etc…) after a Russian camera buying bender. That and a couple of FEDs are all that remain from that episode. KM is an awful camera and I love it regardless. Plastic is so thin I held it too firmly while shooting a couple of frames and hindered the auto advance. Neat shots however.