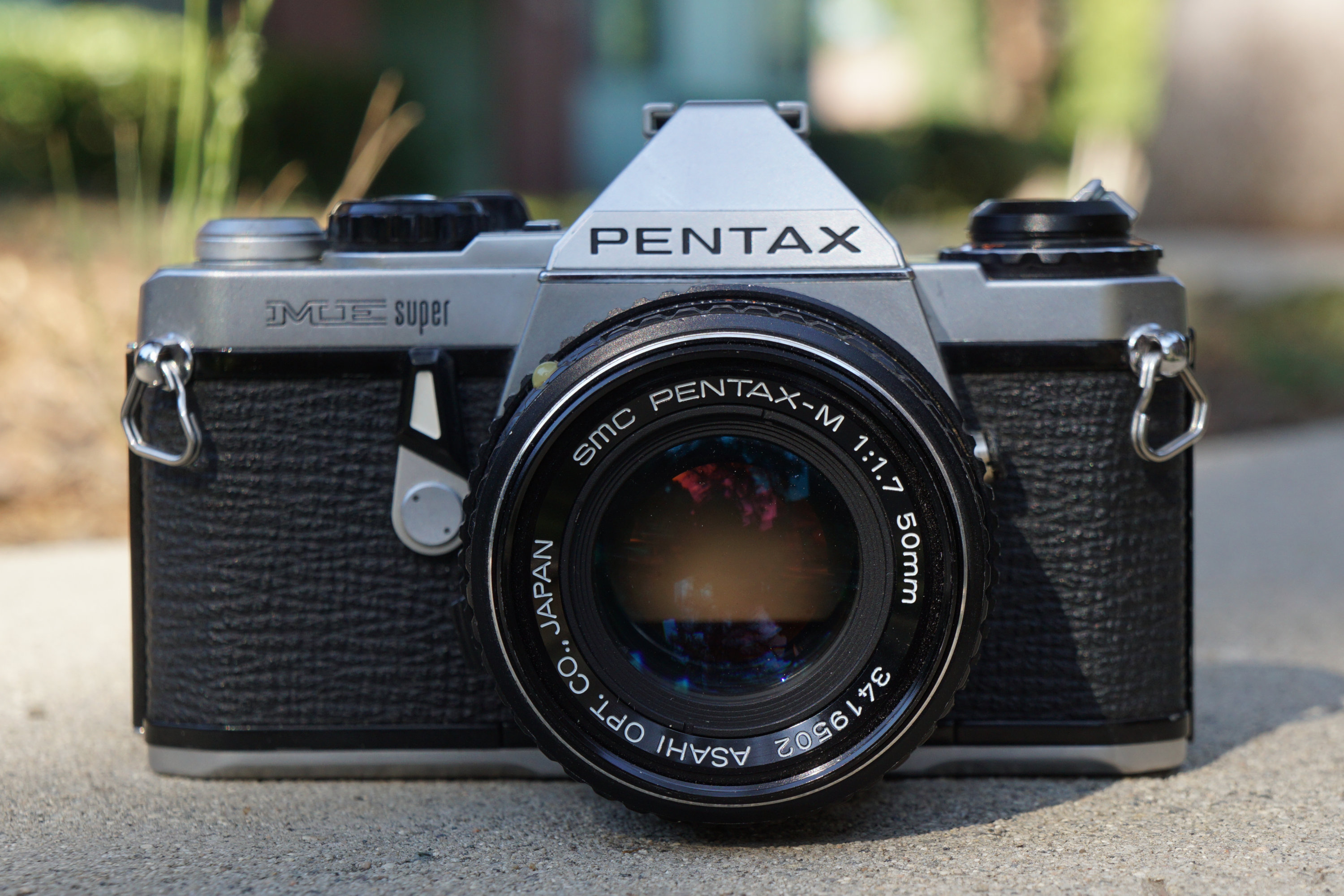 “I just want you to live up to the image of you I create.” – Ani DiFranco – ‘Dilate’

Is the Pentax ME Super the perfect Pentax? As a long-time Pentaxian – I got my start nearly 30 years ago with a KX and an MG – I have been searching for the ideal Pentax 35mm SLR. For many years I suspected it might be the MX, the camera that won Kosmo Foto’s best-ever Pentax poll. But then I got one, and it wasn’t the love connection I was hoping for. And while I’ve always preferred manual exposure, my Ricoh KR-10 convinced me of the benefit of having both manual and automatic functions in one camera.

So where should I look for Pentax perfection? What I really wanted was a manual-focus SLR camera as small and light as the MX and MG, with the automation of the KR-10 and the manual operation and match-needle meter of my KX. Pentax never made that exact camera, but the ME Super seemed like it might come close.

No sooner had I come to this conclusion than fortune smiled upon me: A colleague who saw me snapping away with the MX told me had an old Pentax SLR, not sure what model, and did I want it? Yes, please! The mystery camera turned out to be an ME Super in good working order. Score!

The ME Super appears to have been the result of much flapping about on Pentax’s part. When the flyweight M-series SLRs appeared in 1976, buyers could only choose the manual MX or the automatic ME. Those who wanted both manual and automatic exposure in one (Pentax) camera had to buy the bigger K2. It wasn’t until 1980 that Pentax released the ME Super, effectively an ME with a manual mode.

If you have no experience with any of Pentax’s M cameras (or the Olympus OM series), the first thing that will strike you is their size and weight, or rather the lack thereof. Like all the Ms, the ME Super is significantly smaller in all dimensions than standard-size cameras like the Pentax K1000. Even Nikon’s diminutive FG looks big in comparison. The body alone, with batteries but no strap or film, weighs a mere 15.9 oz (451g), 6.4 oz (180g) less than a Pentax KX and half the weight of my Nikon N8008. It’s only about two to 3.5 oz (70-100g) heavier than the plastic-fantastic Minolta 400si and the polycarbonate Canon EOS Rebel 2000 – pretty amazing considering the ME Super uses a metal chassis and body.

Camera weight wasn’t something I thought much about when I was young and fit, but now that I’m old and flabby I really do appreciate a lighter camera. Swinging my KX or my Nikomat FT2 up to my eye a dozen or so times gets to be a real workout. The ME Super is much easier on these old arms and wrists—and mine doesn’t even have the featherweight 40mm “pancake” lens (not yet, anyway).

Like the ME before it, the ME Super uses a Seiko metal-leaf vertical-travel shutter, an improved version called MFC-E2 that increases top speed to 1/2000. Flash sync is a speedy 1/125. The ME Super’s feature set is aimed at the mid-level amateur: It has an exposure compensation dial, clockwork self-timer, shutter-cocked indicator, memo holder for your film box lid, and threaded shutter button for a cable release, but there’s no depth-of-field preview or mirror lock-up. Focusing aids include a horizontal split-ring surrounded by microprisms, and the film speed range is 12 to 1600 ASA/ISO. The ME Super takes two LR-44 button batteries, and without them will only fire at flash sync speed or bulb. 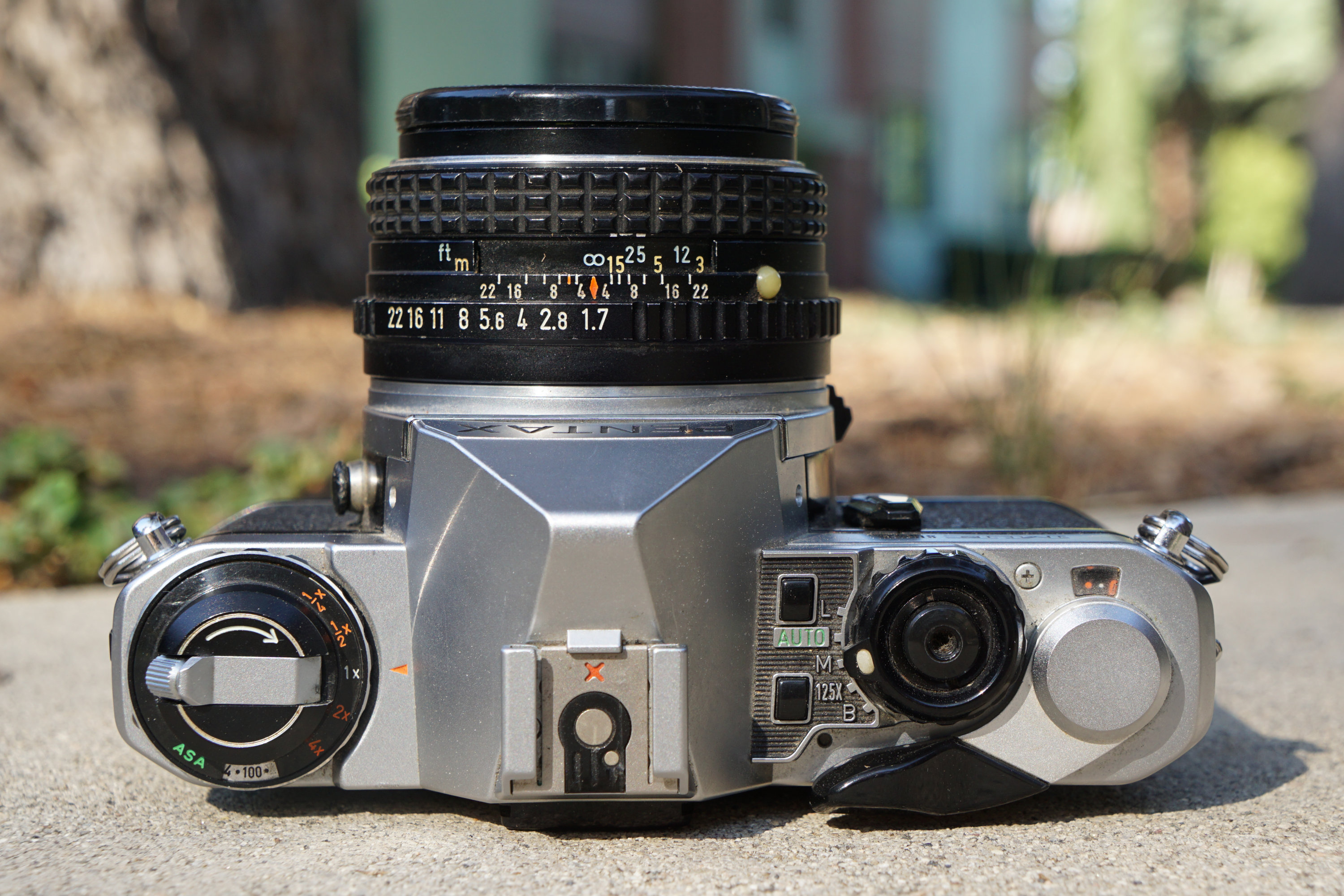 One feature I’ve never seen on anther camera is the ME Super’s film advance indicator, a little window with red and black lines that wiggle back and forth if the film is moving when you wind or rewind. This gizmo is linked to a collar at the top of the rewind spool, so it won’t do its dance until the leader has been secured and the spool is definitely winding film. When rewinding, it stops moving just before the film leader disappears into the canister.

No doubt its purpose is to prevent mis-loading, but I would think that’s all but impossible with the ME Super. Like other Ms, it features Pentax’s Magic Needles film spool—just jam the end of the film leader between any two white pins and the spool grabs it tight. My MG had the Magic Needles, and I never mis-loaded and was even able to get an extra shot or two on each roll.

Shooting with the ME Super – Manual and automatic

Making pictures with the ME Super in automatic mode is as easy as can be. The left edge of the viewfinder shows a stack of shutter speeds, and an LED lights up next to the shutter speed that the ME Super has picked for your selected aperture—green for 1/60 and over and yellow for 1/30 and under. (The shutter is actually stepless, so it can pick in-between speeds to suit your exposure.) If your scene is outside the meter’s range, a red LED glows next to OVER or UNDER labels that bookend the numbers. Pentax says the shutter maxes out at four seconds, but I’ve taken night shots in which it accurately metered exposures of 20 to 30 seconds.

But you didn’t buy an ME Super to shoot in automatic mode, right? Of course not! To take over full control, press down on the little plastic button that locks the shutter dial in AUTO and turn it to M. Inside the viewfinder, the LEDs now indicate your selected shutter speed, while a flashing red LED next to OVER or UNDER serves as your meter display. The two black buttons next to the shutter dial select the shutter speed; press the up or down buttons to raise or lower the speed until the OVER/UNDER LEDs stop flashing. Alternatively, you can select a shutter speed and twist the aperture dial until the red LEDs stop flashing.

…And here’s the problem

Setting shutter speed this way is quick, and certainly easier than twisting the small, stiff dial on the MX. But it’s far from a perfect system, largely because the meter display really isn’t conducive to manual shooting. Let’s say you’re hand-holding in low light, so you select 1/60th of a second, and the meter shows UNDER. You can twist the aperture dial from one end to the other and that UNDER light will keep flashing, with no indication of how far off your exposure is.

Pentax’s newer P30T uses a similar meter display, with a solid LED next to your selected shutter speed and a flashing LED at the recommended speed, so you can see right away how far you are from the correct exposure. Not so with the ME Super. An analogue match-needle display (as used in my KX) lets you know if you’re in the ballpark, and even a simple centre-the-needle meter or the Pentax MX’s red-green-yellow LEDs tell you if you’re within a stop or so. The ME Super’s meter is Boolean, yes or no, go or no-go—the display looks exactly the same whether you’re off by one stop or five.

When I shoot the ME Super in manual mode, I don’t really feel like I’m shooting manual. Sure, I’m manipulating all the controls, but with such a limited feedback loop I feel like I’m doing the same thing as aperture-priority automatic mode, but a lot slower. The ability to lock in a shutter speed is certainly handy, but the ME Super doesn’t give me the independence I want when I shoot manual. I feel more like I’m playing a 1970s-era video game, pressing buttons in response to flashing lights. 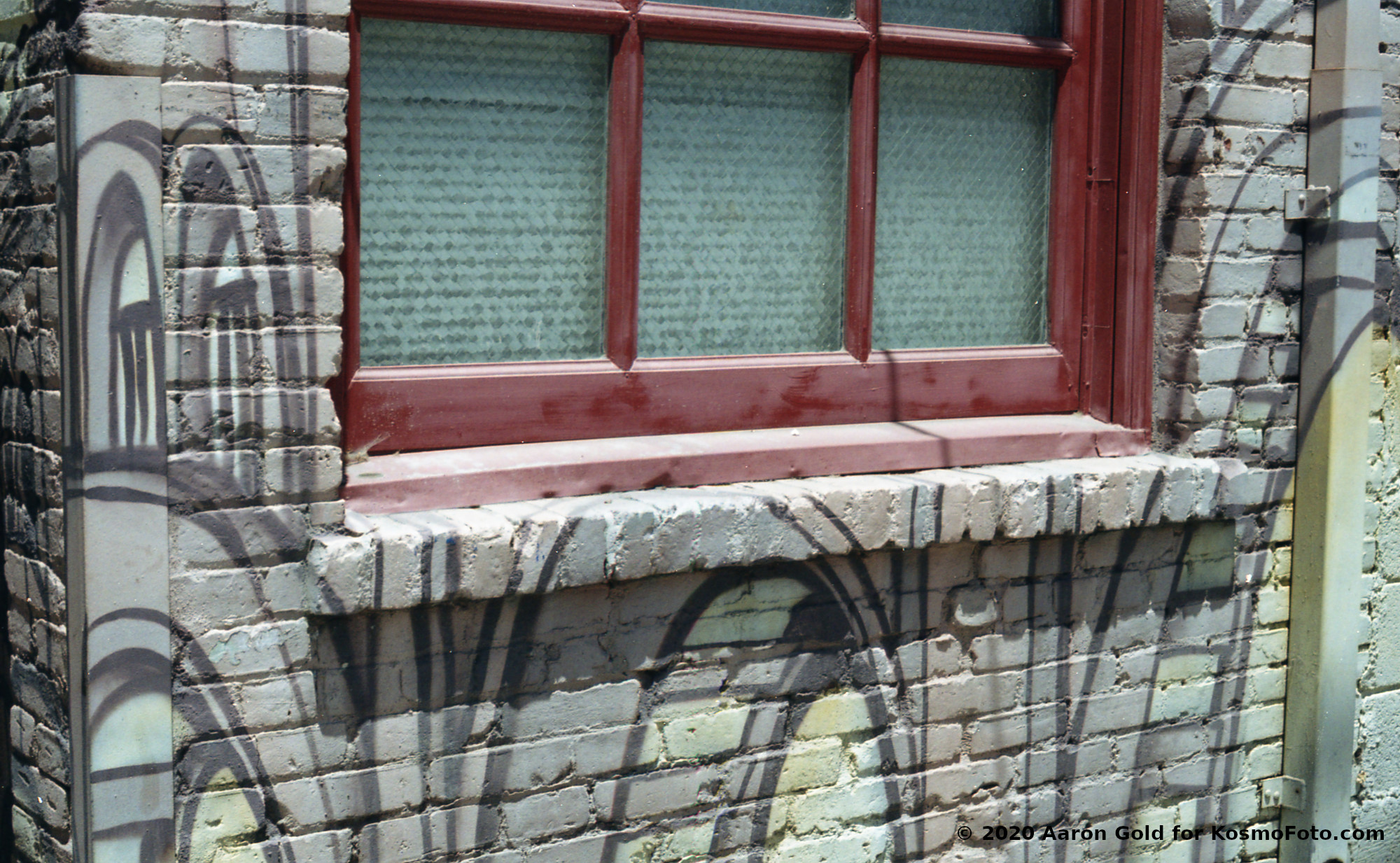 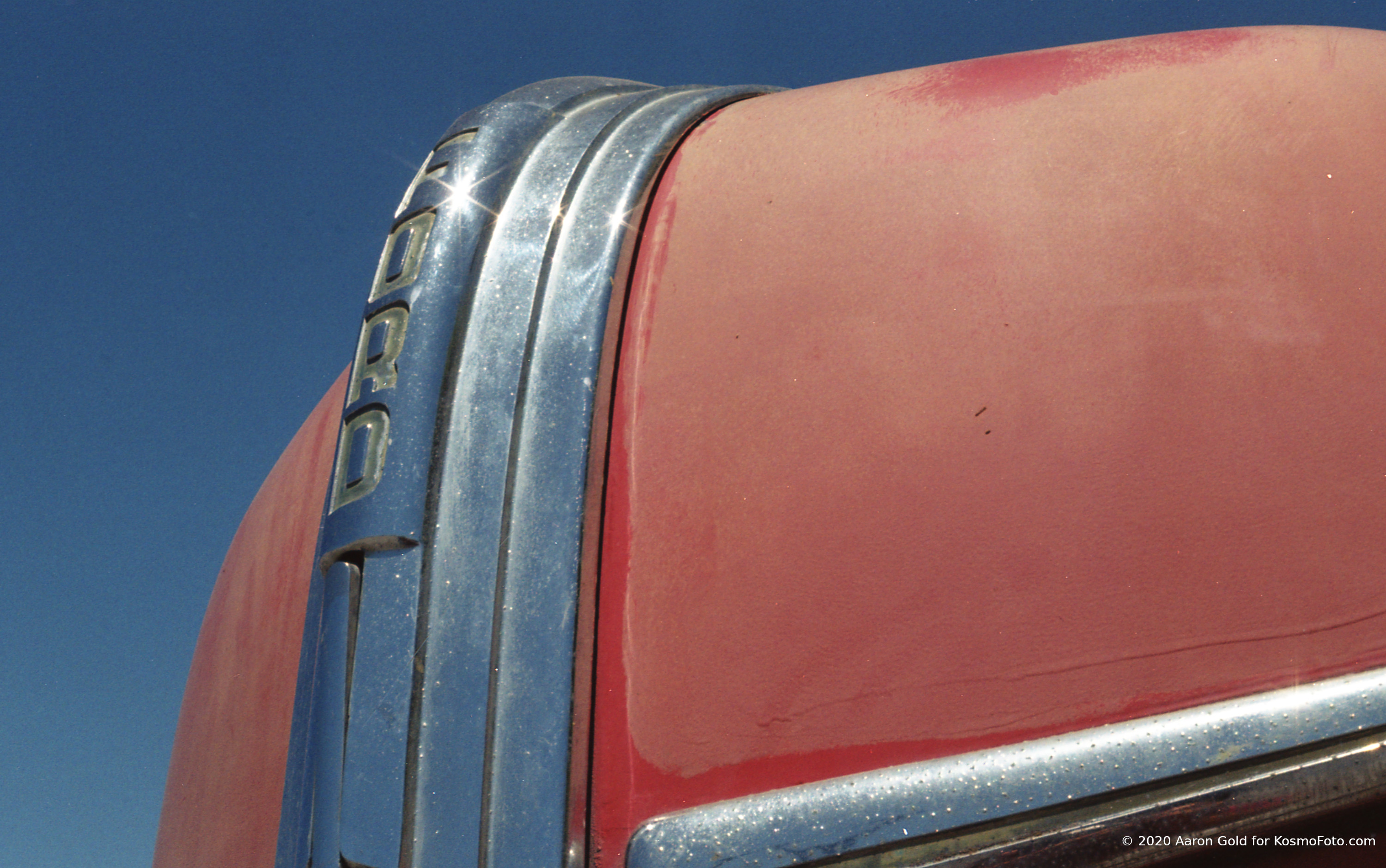 And while I’m whining, let’s talk about the downside of the ME Super’s light weight: It shakes more than heavier cameras when you fire the shutter, and there’s no mirror lock-up function. That can be a problem if you’re hand-holding at low shutter speeds or using a long lens.

Not my perfect Pentax, but still Super for ME

Having read the last few paragraphs, you might think I’ve found the ME Super a bit of a let-down. Not at all – it’s become my go-to walk-around camera because it’s small and light and accurate. It almost always gives me good exposures and healthy-looking negatives. If I’ve packed up another camera for a particular project, often as not I’ll snap a 50mm or a 28mm onto the ME Super and drop it in the bag as well. There’s always room for such a tiny camera!

But no, the ME Super isn’t quite the perfect Pentax I was looking for. I want a manual camera with an automatic mode, but the ME Super feels more like an automatic camera with a manual mode. Other SLRs I own, be they older manual focus (Nikon FE, Ricoh KR-10) or newer autofocus (Minolta 400si, Nikon N8008), feel equally well suited to both manual and automatic shooting. The ME Super, on the other hand, feels like its manual mode was an afterthought. The handbook says that automatic should be considered the “normal” mode, and in practice that’s generally how I use the ME Super. If I’m doing something that I know will require mostly manual shooting, I’ll take a different camera.

Would I recommend the ME Super? You bet I would. The ME Super is a delightful camera to use, and they are abundant and affordable on the used market, frequently selling in the $50 to $100 range with a lens (often as not the ubiquitous Pentax 50mm f/1.7). The ME Super has a good-but-not-great reputation for reliability, with jammed shutters (easy to fix) and problematic winders (not so easy) apparently being the most common complaints. And because the ME Super uses the same K mount as the Pentax K1000, lenses are plentiful and cheap.

While the ME Super didn’t turn out to be my perfect Pentax, I’m very glad that I own one. For now, though, the search for that perfect Pentax camera continues.

Anyone have a Super Program they want to sell cheap…?

AGAINST: Mirror shake, not the best for manual shooting

My first ever SLR bought with my own money. Still love it as a design package. Sadly I’ve had a few as they didn’t seem that reliable back in the day. The most recent one I’ve had is showing signs of corrosion around the exp comp dial which messes with the exposure meter. I think I’ll always have one even if it’s not that reliable. I have a Super Program you can have for nowt if you’re in the US. Never gelled with it. Currently using a plastic fantastic MZ-5.

Why not the Super A/ Super Program?
It’s about the same size as the ME Super. Has the same shutter speed +/- buttons, has 3 auto modes and manual metering displays +3 to -3 in viewfinder, has TTL flash, is better a build quality, and has a 3.5fps motor.

My biggest pet peeve about the ME Super isn’t its manual mode limitations, rather the lack of an auto-exposure lock, since its meter usually favours highlights. But once you’ve grasped how it works it’s a very practical camera which I deem to be faster to operate than all-manual MX.

“What I really wanted was a manual-focus SLR camera as small and light as the MX and MG, with the automation of the KR-10 and the manual operation and match-needle meter of my KX. Pentax never made that exact camera..”