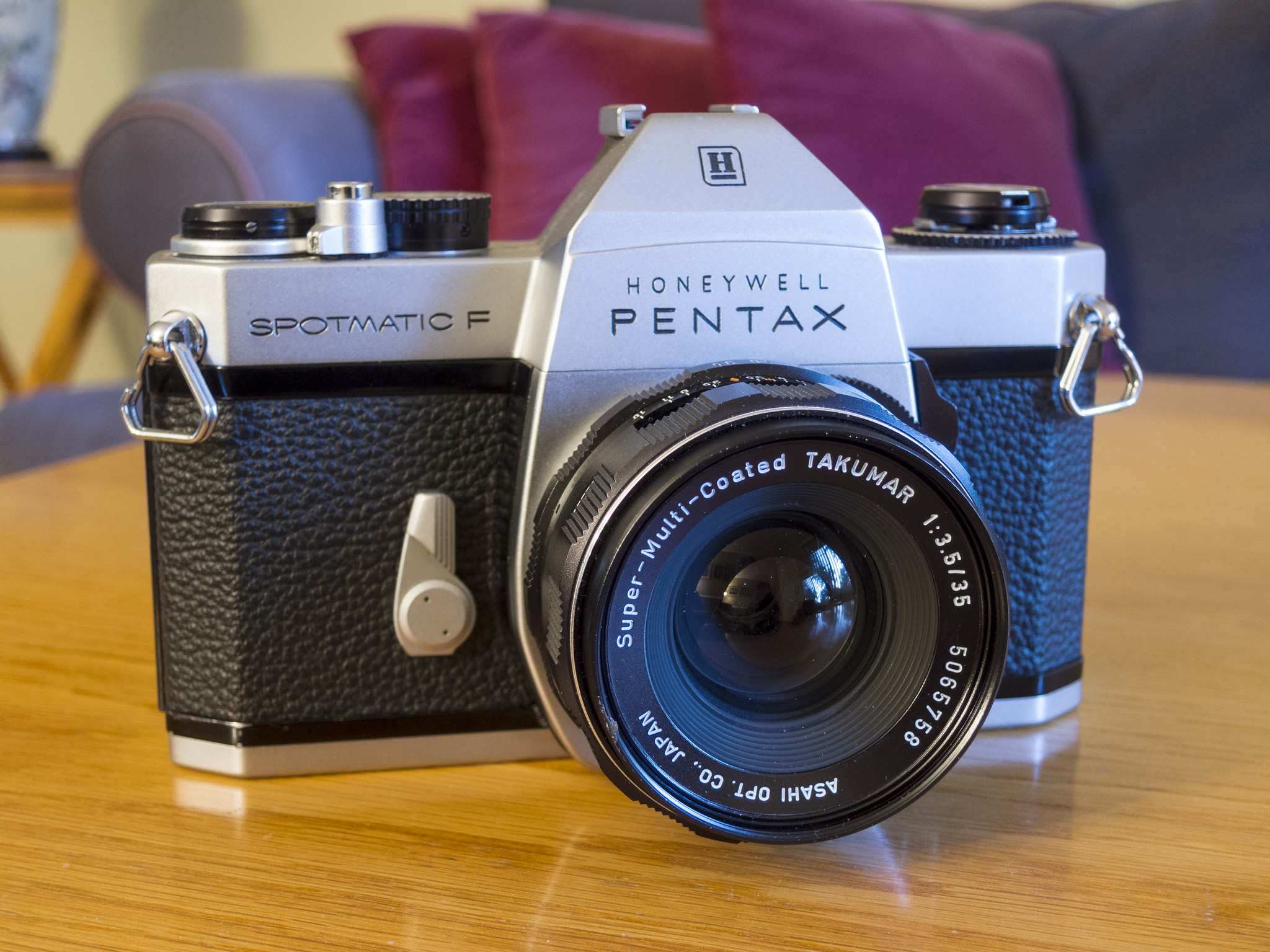 In October, to mark the 100th anniversary of the founding of the company that would become Pentax, Kosmo Foto set up a poll to find the most popular Pentax film camera.

We offered up a list of 76 different Pentax marques – from the minuscule Auto 110 to the monster 67 – and nearly 700 people (including many members of the Pentax Forums community) picked their favourites. Voters could pick three cameras, with their choices ranked getting three, two or one points, and the points toted up to find the winner.

The points have been counted up, and now – just in time for the end of the year – Kosmo Foto can reveal the most popular Pentax film cameras.

20. Pentax SP1000 (51 pts)
Introduced some nine years after the Spotmatic in 1973, the SP1000 is basically a Spotmatic with a fastest shutter speed of 1./1000 and no self-timer – a budget-friendly SLR designed for beginners.
Read more: Pentax Forums review

19. Pentax 645N (54 pts)
A medium format SLR released in 1997, the 6×4.5 format camera was a huge success at the time and is still immensely useable, released as a replacement for the original manual focus Pentax 645 from 1984. SLR-style handling makes it excellent for street work.
Read more: Ken Rockwell review

18. Pentax Auto 110 (55 pts)
Probably the best 110-format camera ever produced, this was the only 110 camera that came with a full range of lenses and other accessories. It’s a pro-spec SLR you can hold in your hand.
Read more: Classic Cameras review

16. Pentax ME (76 pts)
Released in 1976, this was a sort of K-mount successor to the aperture-priority ESII. A solid, metal-heavy, entry-level camera from the golden age of SLRs.
Read more: Casual Photophile review

13. Pentax Spotmatic II (88 pts)
Another of Pentax’s peerless Spotmatic line, the Spotmatic II was released in 1971, featuring an increased ISO range up to 3200 and an attached hotshoe compared to the original.
Read more: Pentax Forums review

12. Pentax MZ-S (91 pts)
Pentax’s top-of-the-line camera for the early 2000s, this is right up there with the very best high-end SLRS from the turn of the century.
Read more: 35mmc review

11. Pentax KX (93 pts)
One of three K-mount cameras released in the mid-1970s to replace the M42-sporting Spotmatic family, the KX is a higher-spec brother of the KM, featuring a higher Iso range and mirror lock-up.
Read more: Pentax Forums review

10. Pentax Super A, Super Program
Appearing in 1983, the Super A is an aperture and shutter-priority SLR featuring Pentax’s KA range of lenses, this is still a massively popular SLR with street shooters. Plastic but fantastic.
Read more: Christopher J Osborne review

9. Pentax 67 II (100 pts)
Nearly 30 years after the release of the original Pentax 67, the ultimate incarnation of this gargantuan medium format SLR was released in 1998. It features mirror lock-up to help tame the camera’s prodigious mirror shake, fits all lenses every made for the system, and can shoot 220 film aswell as 120.
Read more: Luminous Landscape review

8. Pentax 6×7 (141 pts)
In 1969, Pentax released its most iconic medium format SLR, the monster 6×7. A favourite with both landscape and studio photographers, the distinctive 6×7, which came complete with a wooden carrying handle that looked like something from a World War One machine gun. Its fantastic suite of lenses helped create a formidable reputation.
Read more: Daniel J Schneider review

7. Pentax 67 (173 pts)
The intermediate model in Pentax’s trio of monster medium format SLRs, this version appeared in 1990, replacing the 6×7 which had chalked up more than two decades of production.
Read more: Japan Camera Hunter review

5. Pentax Spotmatic (252 pts)
Released in 1964, the Spotmatic was the camera which turned Pentax into a household name and also one of the first to use TTL (Through The Lens) metering. A rightful classic, this is undoubtedly one of Pentax’s most meaningful contributions to film photography.
Read more: Film Photography Project review

4. Pentax ME Super
One of the classic K-mount SLRs, the ME Super was released in 1979 and remained in production until 1984. The main difference to the earlier ME was the addition of a manual mode, making it more useful for those wanting to learn the basics of photography.
Read more: Down The Road review

3. Pentax K1000
The camera that’s become the standard 35mm SLR for film students, the K1000 was produced in enormous quantities in Japan and then China. The K1000 is a manual focus SLR with little in the way of frills and frippery – but its no-nonsense features saw it in production for a staggering 21 years, from 1976 to 1997.
Read more: I Still Shoot Film review

2. Pentax LX
Another classic K-mount film cameras that clocked up more than two decades in production (1980 to 2001), the LX was Pentax’s high-end rival to the likes of the Canon F-1, Nikon F3 or Olympus OM-4. Featuring aperture priority alongside all-manual operation, this is still a premium bit of kit.
Read more: Fog Dog review

1. Pentax MX
The winner, beating the likes of the classic Spotmatic, K1000 and ME Super. Released in 1976, the MX was Pentax’s premier 35mm SLR until the LX came into production, and designed as an all-metal counterpart to the ME. Like the K1000, it’s often recommended for student photographers, and considered a batter bet thanks to its depth of filed preview and self-timer.
Read more: 35mmc review

[…] how much they too like their Pentax MX. That being said, with the Pentax MX being voted over on Kosmo Foto as the best Pentax film camera they ever made, maybe I shouldn’t be […]