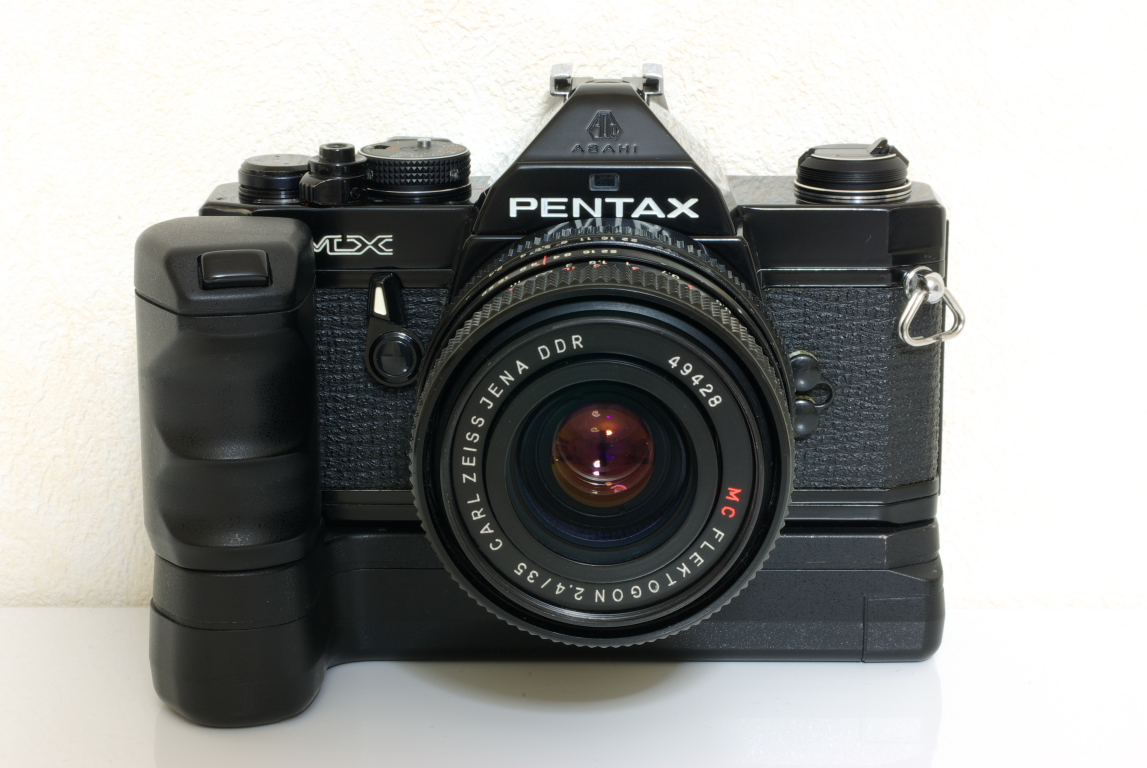 A cult classic from the decade of heavy metal

The ME and the MX were both released at the same time, and both were a shot across the bow from Pentax to Olympus, who had previously lagged behind in the full-frame SLR game. Well, in the early 1970s that had definitely changed. The OM-1, unveiled in 1972, was much smaller than the leading cameras from the likes of Canon, Minolta, Nikon and Pentax, and came with a suite of fantastic Zuiko lenses. Olympus had shown hi-spec SLRs didn’t have to weigh a ton.

The M series, which these two cameras kicked off, would eventually boast some seven models over a production run of 11 years. Never having quite the notoriety of the Spotmatic family, they nonetheless remain some of Pentax’s most popular models, and are still very useable 40 years later.

The ME was an aperture-priority SLR, featuring a stepless electronic focal plane shutter that went from 8s to 1/1000. It was definitely aimed at those looking for ease of use, however – there was no way to manually choose shutter speeds apart from B and 1/100 (the speed the camera would default at if the batteries were flat). It used the Pentax K bayonet mount which had superseded the hugely popular M42 screw mount. The ME had a viewfinder which showed around 92% of the frame – pretty standard – but it was very bright.

For amateurs and those not so bothered about having complete control, the ME was a perfect camera to get them shooting as quickly as possible; Olympus eventually had an equivalent, the OM-10, but that didn’t come into production until 1979.

But what about the photographer that wanted a little bit more creative control? Pentax had thought of that too. Along with the ME, it introduced the MX, a camera that took some of the automation out of the picture.

The MX was Pentax’s flagship SLR until the LX arrived in the mid 1980s. Instead of aperture priority, it was fully manual, swapping the electronic shutter for a conventional horizontal cloth shutter. Out went the electronic exposure system in favour of a no frills shutter dial. You wanted a correct exposure, you had to make sure you had the right shutter speed.

The shutter was entirely mechanical – batteries were only required to run the centre-weighted meter. This was one up on the likes of the Olympus OM-2, which weren’t able to be used unless they had batteries in them. Unlike the ME, the MX had a choice of focusing screen – no less than nine of them.

Internally, the MX was very similar to the earlier KX, which was one of the first K-mount cameras bought out to replace the Spotmatic family in 1975. The KX earned a fantastic reputation for reliability, so it was a good starting point for a new model. In terms of metering the cameras were very similar, though the MX’s ISO range (25 to 1600) was more limited than the KX’s (8 to 6400). But that those tweaks came with some benefits too; the MX was more than 150g lighter than the KX.

The MX had hot shoe and a self-timer, and there was an attachment which allowed the addition of a motor winder – Pentax’s Winder MX (2 i/s) or a Motor MX (5 i/s) were both attachable.  Finally, if you planned on using flash, the MX had a flash-sync speed of 1/60.

The MX was popular enough to be kept in production until 1984 – an eight-year run which came amid big changes in SLR design, as the major manufacturers swapped metal for plastic and headed towards the age of autofocus.

The MX never became a household name like Pentax’s Spotmatic, or the K-mount student’s friend the K1000. But when Kosmo Foto decided to mark the 100th anniversary of the company which eventually became Pentax with a poll to find the brand’s most popular film camera, it quickly became apparent that a lot of people had a soft spot for the MX. As much as the votes were piling in for the likes of the Pentax 67 and the ME Super, in the end the MX topped the poll by a considerable margin.

Why? What was it about a camera boasting a somewhat unspectacular list of features that made it so popular?

In a recent post on 35mmc, Hamish Gill wrote of his recent experience shooting on an MX. Part of the charm of the MX, at least to photographers such as Gill who prefer their cameras on the smaller side, is the camera’s pocketable qualities. “The Pentax MX is – at least as far as I can work out – the smallest fully mechanical metered SLR camera ever produced. And yes, before you ask, it is slightly smaller than the Olympus OM-1, though there’s very little in it,” he says in his review.

The review focuses some on some of the other plus points of the MX. The camera was aimed squarely at professionals and experienced users. A little mirror in to the viewfinder showed the aperture at the top, and the selected shutter speed on the right hand side. The meter readout is on the right hand side – a green light indicates the correct exposure, an orange light above and below indicates half a stop out, and red lights above and below those indicate more than a stop out. As Gill points out, this system walks the fine line of being very useful when the meter is activated, but unobtrusive if you happen to be shooting without batteries. There are no dead needles poking their way into the viewfinder reminding you that you’d normally be using a meter.

The MX was by no means a rare camera, and examples show up pretty readily on eBay – recent auctions show them selling for as little as £60 in working condition with a 50/1.7 lens (no slouch, like the majority of Pentax’s M-range lenses). Considering its reputation amongst Pentax devotees, that may prove to be quite the bargain.

I had an ME and hated it. No issues with aperture priority – I’m happy shooting that way – but it drive me nuts that I couldn’t see the shutter speed .. it’s a Goldilocks camera: it’ll only tell you there’s too much light, too little light, or just the right amount.

Flipped it, bought a Super A and haven’t looked back.

No doubt that the MX is a fine camera. Age has not been kind to the ME series, though. I have seen far more MEs with electronics problems than fully working ones over the past 10 years.

Nice post.
I like my MX as it is … purely manual. One of the best cameras ever made.

I voted for the LX and MX in the mentioned poll.

One point … if I’m not wrong, the OM-1 and OM-3 are both fully manual and require batteries only for metering. Just tried my OM-1 and it works fine without a battery.

After being a long-time K1000 shooter, I wanted to love the MX but alas, after trying a couple copies, they just didn’t feel as robust as a plain vanilla K1000 and the very smart/comprehenseive display just didn’t seem to help me in any practical way. I gave my good MX away to a budding shooter and don’t regret having done so. I held onto my OM-1n, finding it’s shutter speed control, MLU and arguably brighter finder more useful to me. But the MX is quite a cool camera and I was happy to have tried it.