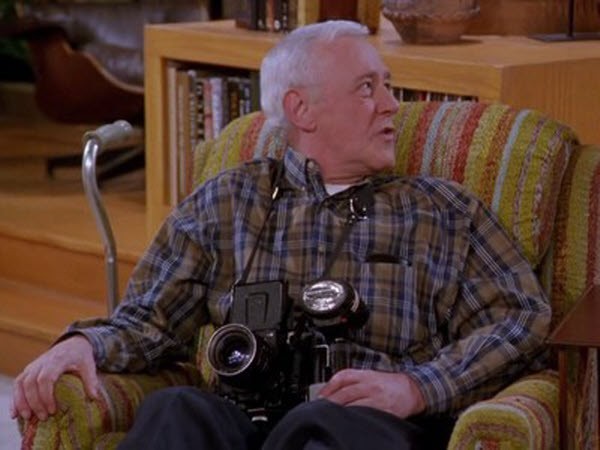 Frasier was undoubtedly one of the best comedies of the 90s (in Kosmo Foto’s possibly controversial opinion, it’s definitely the best 90s comedy beginning with the letter “F”).

Frasier was a spin-off of the sitcom Cheers, featuring psychiatrist Frasier Crane (Kelsey Grammer) moving back to his native Seattle, and living with his retired police detective father Martin.

It was a ridiculously well-written farce, a comedy of manners in which Frasier and his prissy brother Niles were often the butt of the jokes.

Often, but not always: there was one episode that took a swipe at old film cameras instead.

In the episode ‘Star Mitzvah’ (2002), Frasier’s son Freddie is preparing for his Bar Mitzvah. Martin finds his old film camera in storage to take pictures of the ceremony – cueing a barrage of jokes that film camera fans may find all too familiar:

Daphne: What is that?
Martin: My good old Scheerblad-7X-K.
Niles: The blindingest, noisiest, 15lb camera ever produced in the former Soviet Union!
Martin: Can you believe it?  Somehow it got buried deep down in storage.  But, Eddie and I found it just in time for the Bar Mitzvah.
Daphne: What smells like burning plastic?
Martin: Oh, that means the flash unit’s working.
Niles: [still blinking it off] I thought the retina-scorching flash meant that the flash unit was.

You can see the clip below:

Of course, the Scheerblad-7X-K doesn’t exist – though anyone who has walked around with a Kiev-60 around their neck for a day could be forgiven for thinking that camera may have been the inspiration.

And the actual camera that Martin lugs around like an anchor? As one commenter on YouTube, J D, says: “The camera is actually a Mamiya RB67 – not 15 pounds, but certainly can feel like it after you lug it around for a while.”