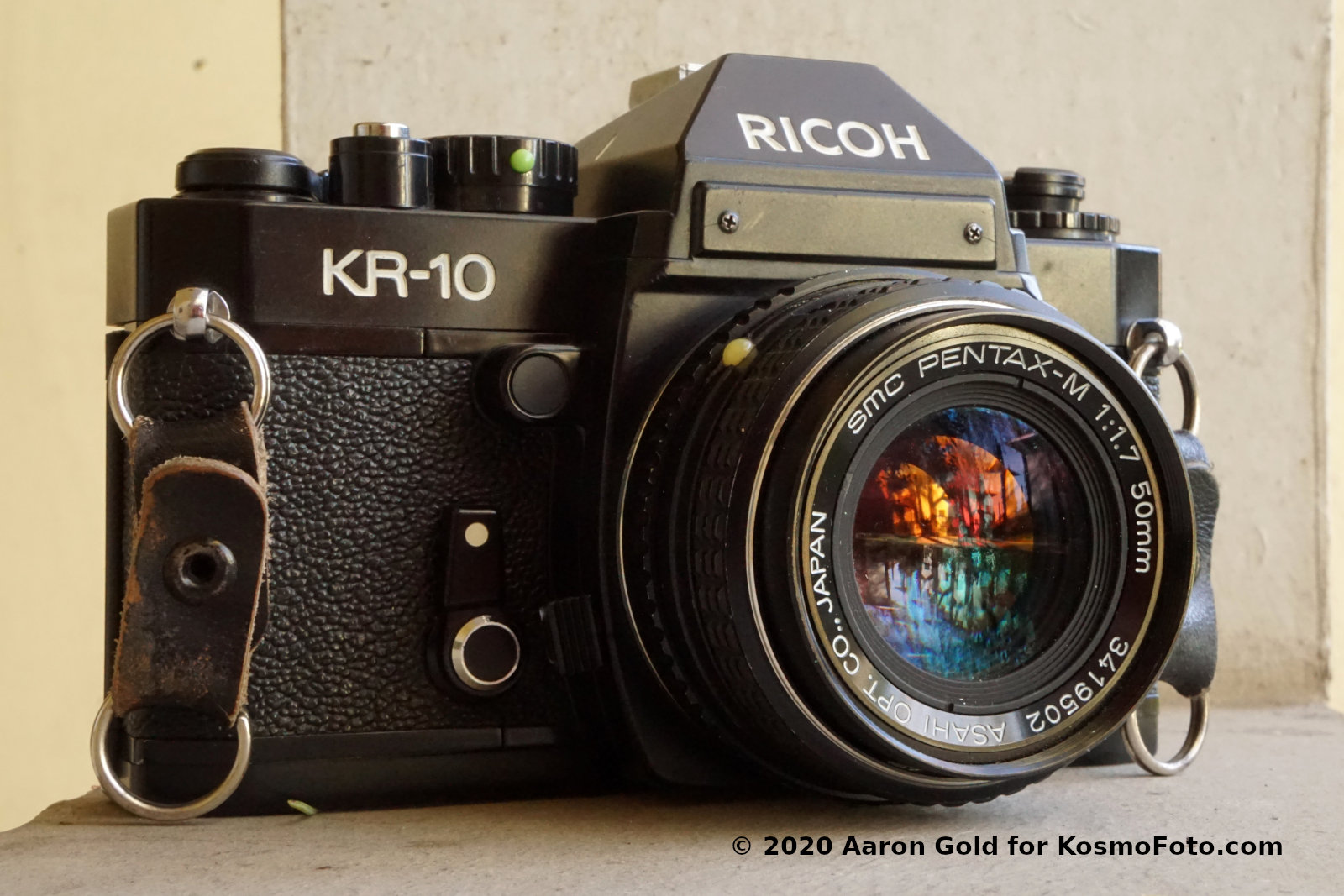 Since we’re celebrating the 101st year of Asahi Optical, the makers of Pentax cameras, I thought it would be fun to look at a 35mm SLR that is almost a Pentax: the Ricoh KR-10.

I was dimly aware of Ricoh cameras for many years, though my knowledge was limited: I knew they were cheap, I knew they used Pentax lenses, and I knew they were rebadged as Sears’ house-brand cameras. (For those unfamiliar, Sears, Roebuck and Co. was the Amazon.com of its day.)

But I never gave Ricohs much serious thought until my friend Joe gave me his old Pentax MX and a camera bag full of accessories. Among them was the Ricoh KR-10 you see here.

I’m guessing Joe never gave much thought to the Ricoh either. It was surprisingly clean, as opposed to the MX, which had more dents and dings than a New York City taxicab. The MX needed to go in for repair (shutter wouldn’t close), but the KR-10 seemed to be in fine shape – all it needed was a fresh set of LR-44 batteries. Since it shared lenses with my Pentax KX, I decided to give it a try.

What I found was an underdog of a camera that actually turns out to be a superhero. 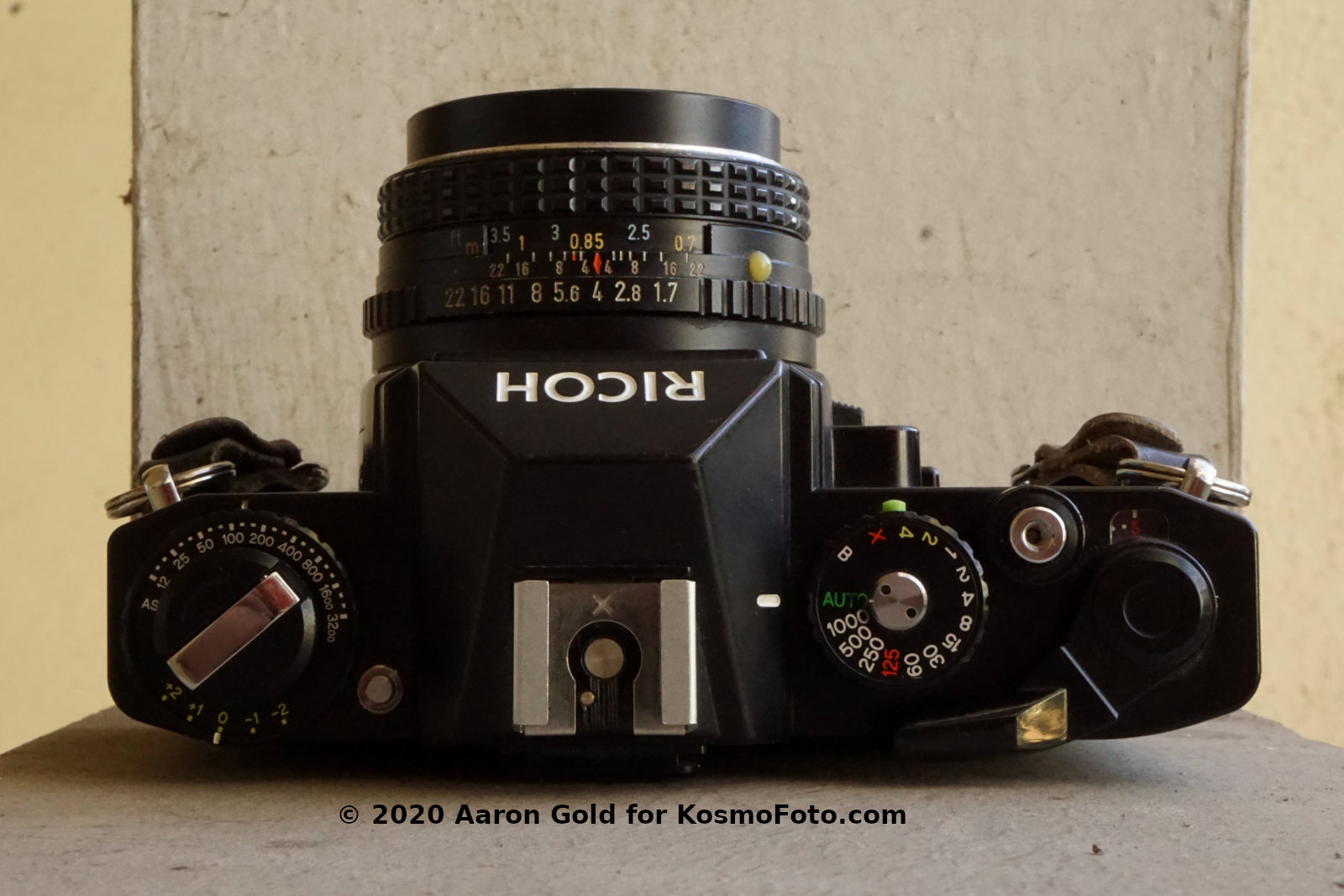 A better comparison might be the Nikon FE, which went for $295 with a 50/1.8. Like the FE – and unlike the MX – the KR-10 has an aperture-priority automatic mode, and its slowest manual shutter speed is four seconds, versus one second for the MX. (All three cameras top out at 1/1000.) Like the Nikon, the KR-10 features an electronically controlled vertical-travel metal Copal shutter, though that means it relies on its batteries to fire. (The MX uses a mechanical horizontal cloth shutter.) The KR-10 has a self-timer but lacks a depth-of-field preview, a feature that was reserved for its more expensive relatives, the Ricoh XR-1 and XR-2. 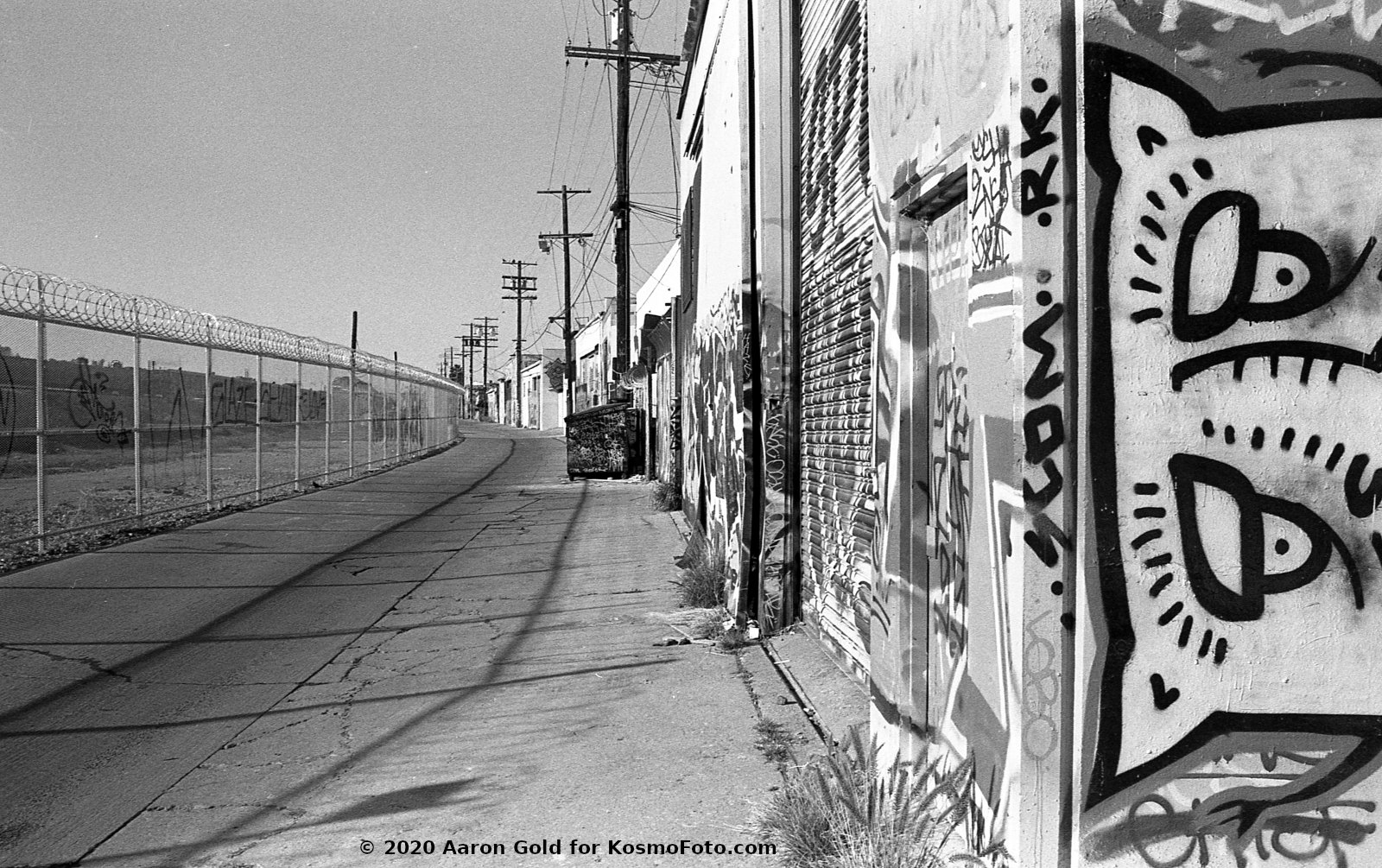 One of the KR-10’s coolest features is the split-screen focus ring. It’s arranged diagonally, a setup that I find easier to use than a horizontally- or vertically-oriented split. I also like the KR-10’s match-needle metering system, which uses a viewfinder display identical to that of my Pentax KX (though it lacks the aperture readout, another nice-to-have feature reserved for the XR-1 and XR-2).

Today, just as when it was new, the KR-10 is a bargain. I’ve seen several go for less than $50 on eBay, standard lens included. The rebadged Sears KSX goes for even less (presumably those not in the know figure a Sears camera couldn’t be worth a fig), as does the Ricoh KR-10 Super, which is actually a very different camera. 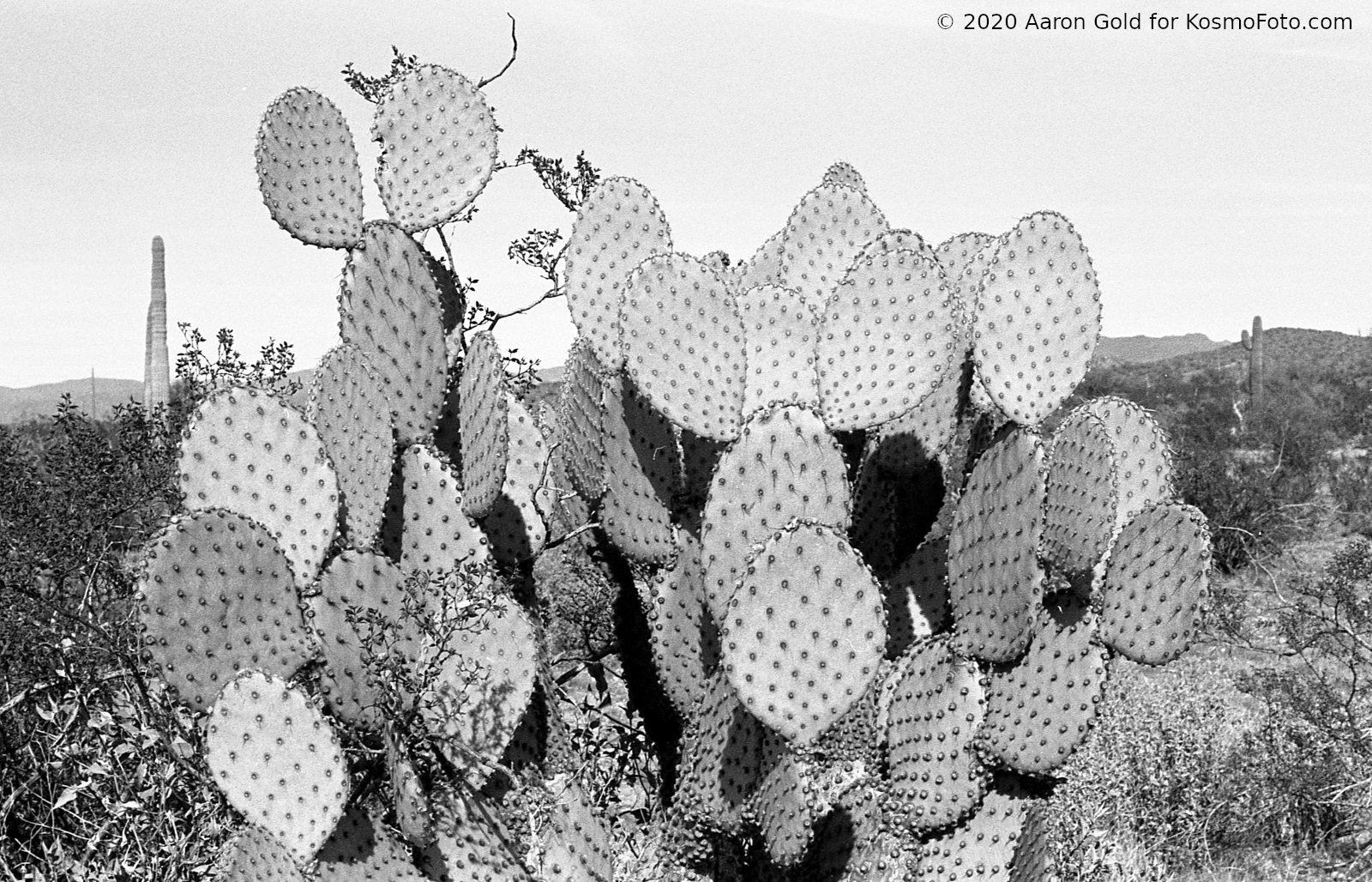 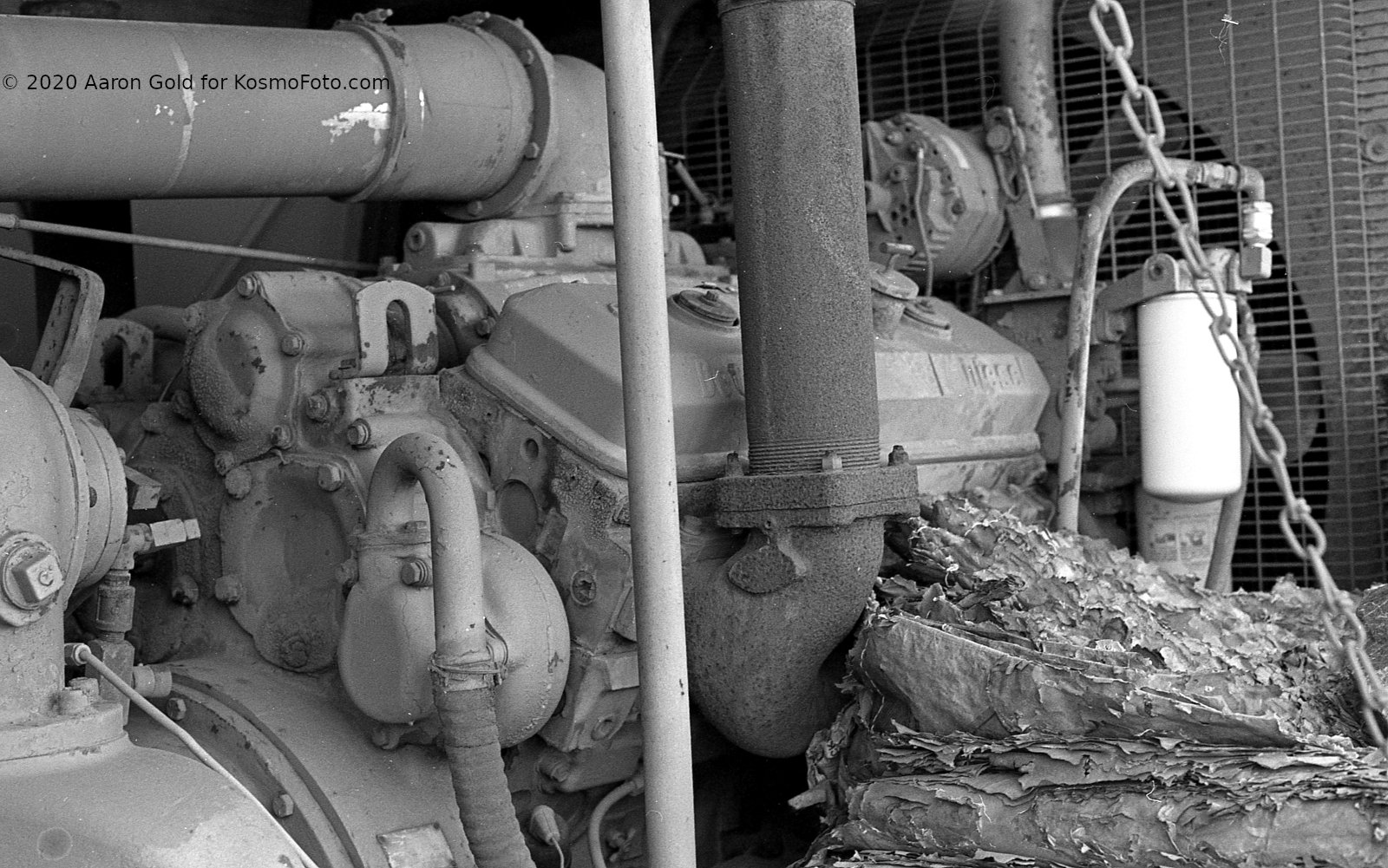 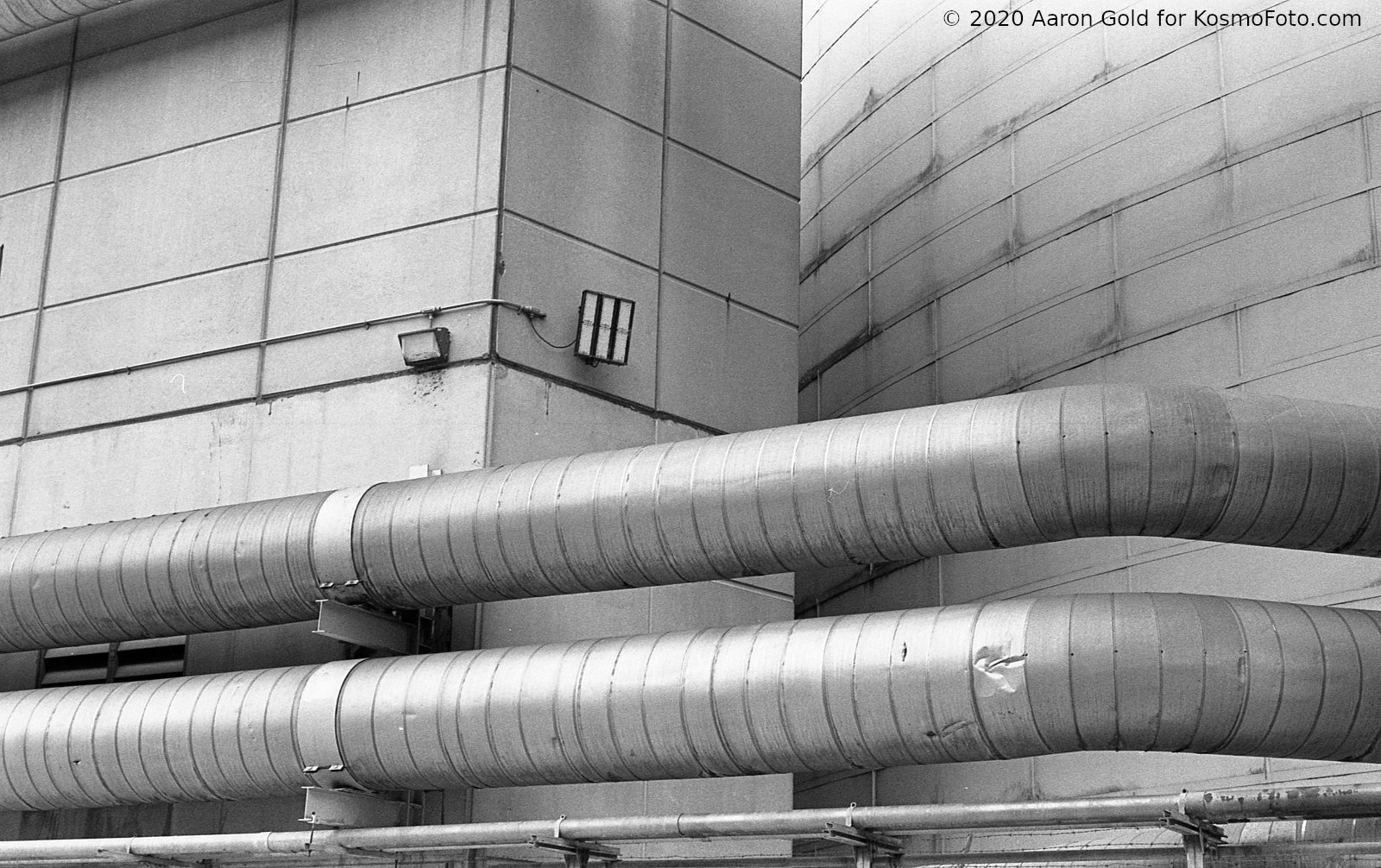 At this point, you’re probably saying “Gadzooks! If the Ricoh does so much and costs so little, why would I even consider buying any other early-80s-vintage SLR?” I guess I should explain that, too.

For all its features, the KR-10 feels like the bargain camera it is. The top and bottom plates are, as far as I can tell, plastic, and the whole camera feels substantially less substantial than its contemporaries. (I don’t know if the same is true for Ricoh’s Rikenon lenses, as I’ve only shot the KR-10 with Pentax and Vivitar lenses.)

Operation is less refined as well. The Ricoh doesn’t seem to damp the motion of its mirror as well as my other cameras, and there’s a noticeable kick as you snap off an exposure. That’s a bit surprising, since the KR-10 should have inertia on its side: With a Pentax 50/1.7 lens and a roll of film (but no strap), the KR-10 weighs 1 lb 11 oz (769g), only 2 oz (57g) less than the similarly sized Pentax KX. 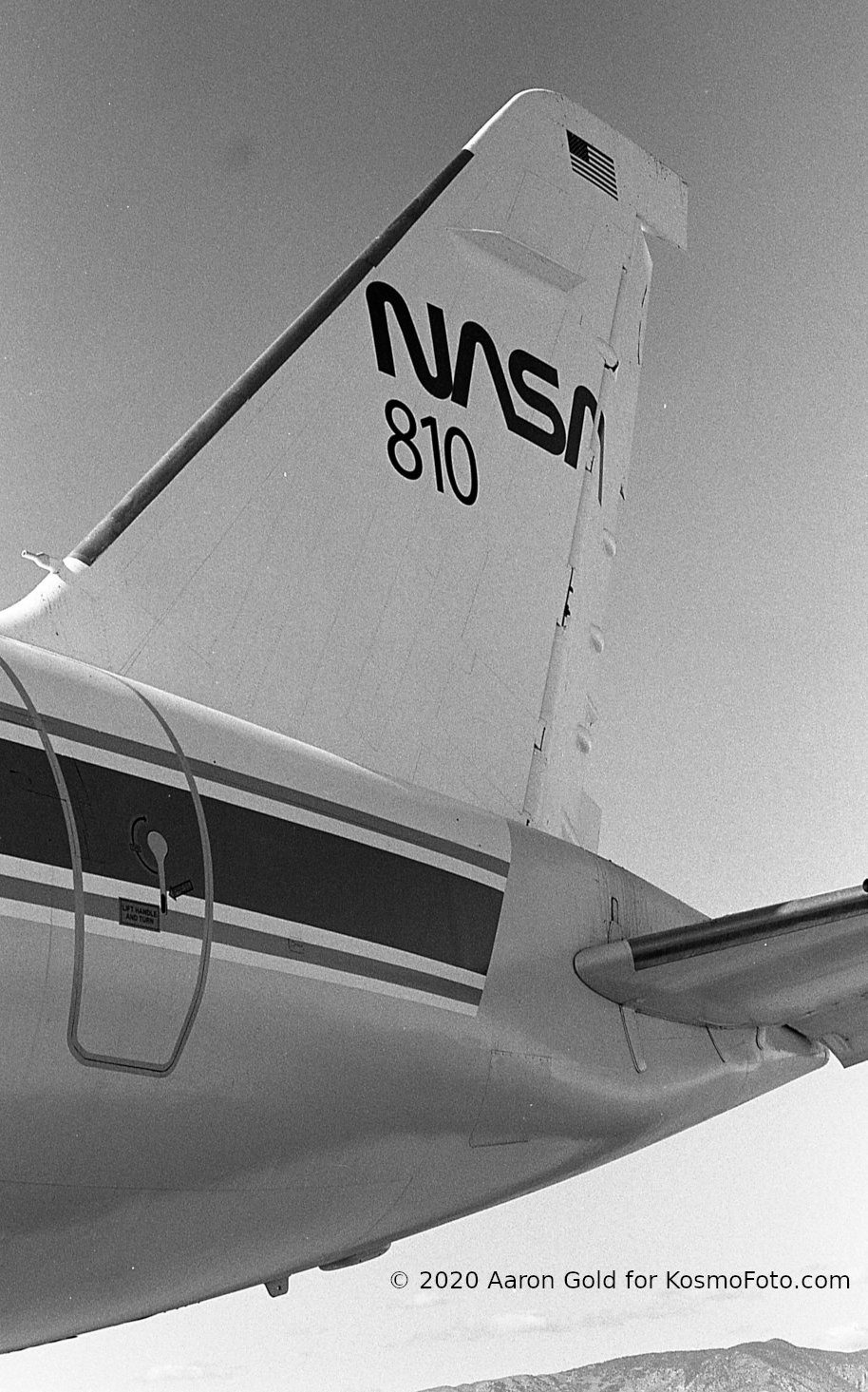 A Pentax MX in the same configuration weighs considerably less (2.25 oz/64g, to be specific), and yet it doesn’t shake as much as the KR-10. That said, the KR-10 isn’t completely hopeless for long-lens shots. Starting the self-timer automatically raises and locks the mirror, which greatly reduces vibration when the shutter fires.

The KR-10’s wind lever doubles as a shutter-button lock and must be pulled out to one of two “standby” positions in order to take a picture. Why there are two positions is beyond me, and the manual sheds no clear light on this. “Choose the one suitable for your own shooting style,” it says. Huh?

On some Pentax models, this standby position also turns the meter on, but not the Ricoh: you have to hold the shutter button halfway down, just like the Pentax MX. I find this design to be rather irritating. Press too far and you’ll take the shot you’re trying to meter. Don’t press far enough and the meter won’t activate. It’s hard to hold the button in just the right spot, and I often find the needle bounding up and down as I inadvertently turn the meter on and off. I prefer manual shooting, but more often than not I’ll switch the KR-10 to automatic just to avoid the maddening meter. 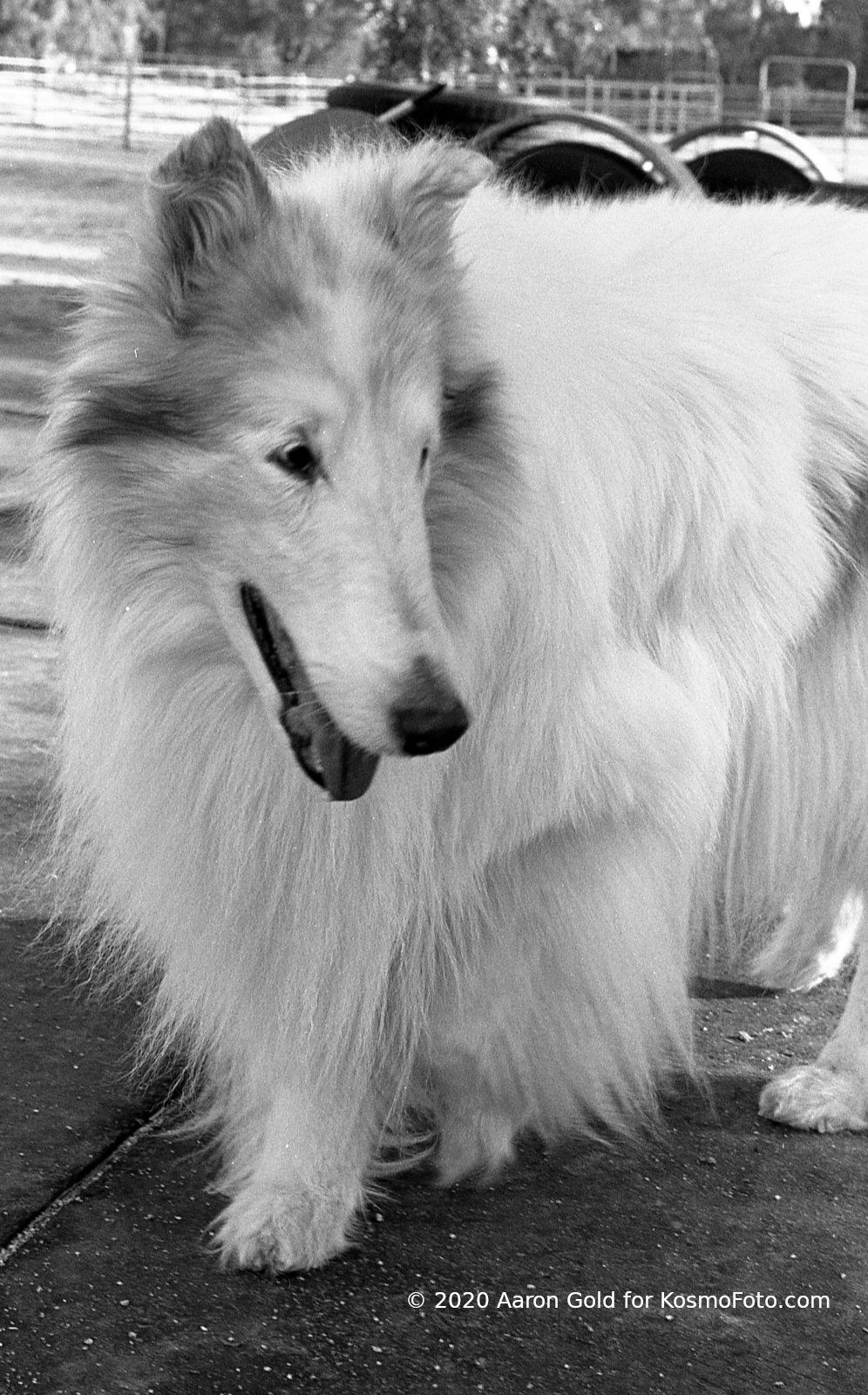 And yet for all its little annoyances, the KR-10 does its job exceptionally well. It delivers most of the functionality, if not the flair, of my Pentax KX, and with the added convenience of an aperture-priority automatic mode. Since it uses Pentax lenses, you get the same image quality you would with a proper Pentax camera. And thanks to the automatic setting, I’ve captured images with the Ricoh that I’m pretty sure I would have missed with the KX.

What I like best about the KR-10 is how approachable it is. This is the camera I hand off to friends who are familiar with photography basics but haven’t shot film in ages (or ever). The match-needle metering system takes seconds to explain, if I even need to explain it at all, and all of the controls just seem to make sense. If you’ve shot with any garden-variety SLR, the KR-10 will feel instantly familiar.

And if I loan it out to someone who breaks it, no big deal – I can replace it for the cost of a few boxes of film. 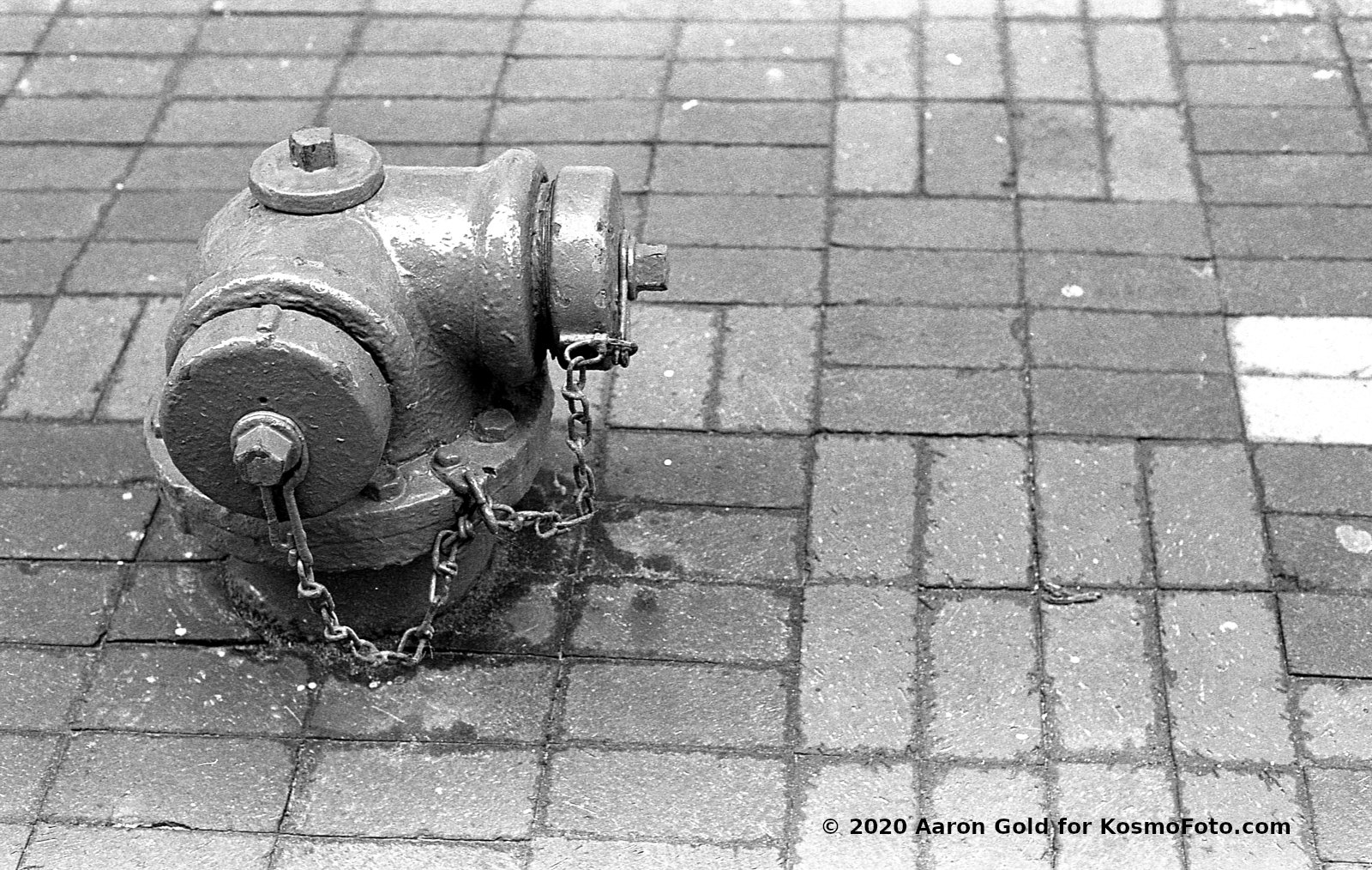 When people ask me to recommend an inexpensive 35mm SLR with manual capabilities, I tell them about the KR-10. It has almost all the features a budding budget film photographer could want, including a great selection of high-quality K-mount lenses from Pentax and other manufacturers.

Best yet, if they ever move on to something more expensive, their new camera is bound to feel like an improvement – even if it doesn’t make pictures any better than the KR-10.

Great camera, agreed! This was my favorite for many years – now I prefer my Nikon F100 but this is still a close second!