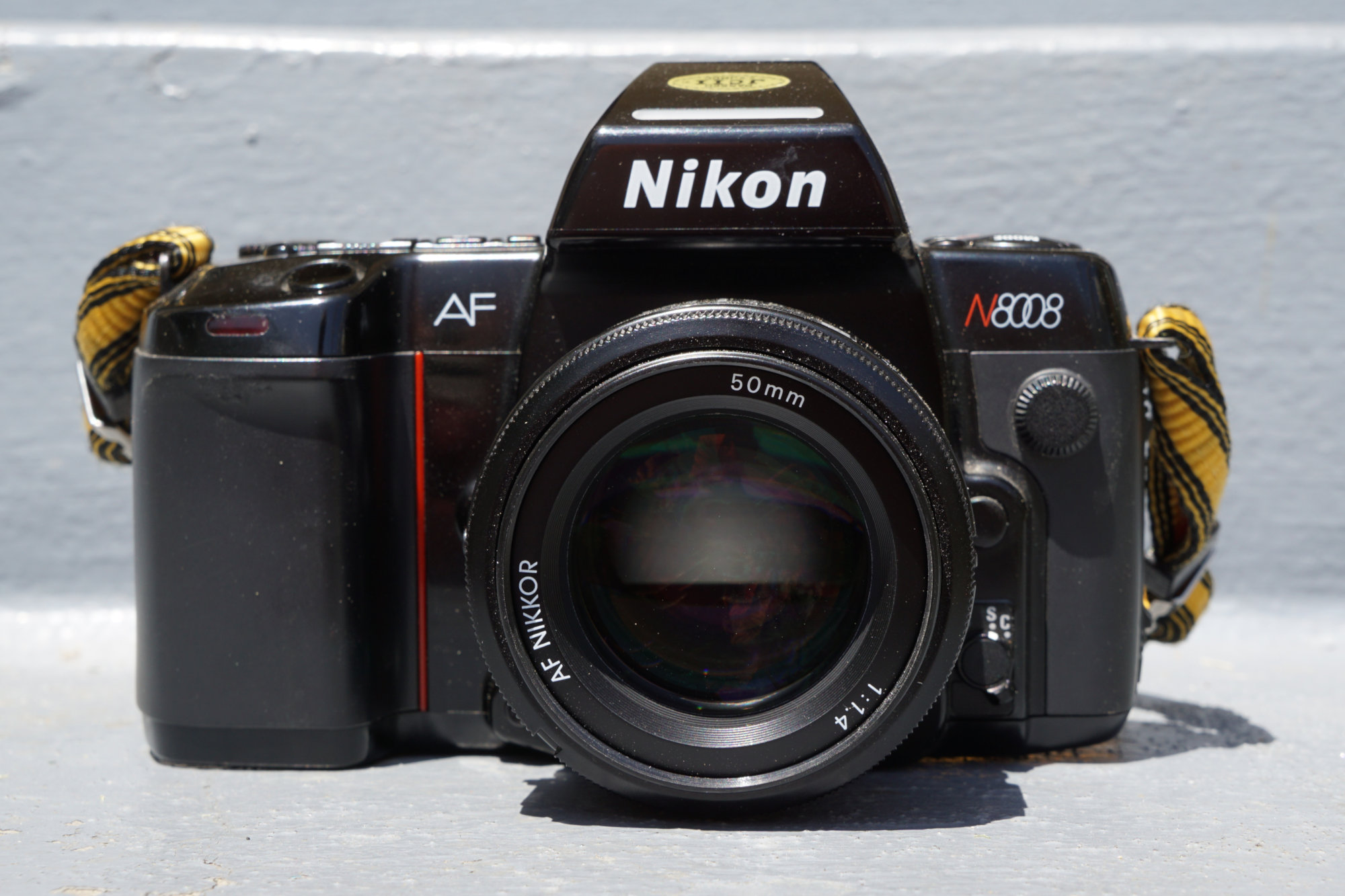 Writing a level-headed review of the Nikon N8008 (aka the F-801) isn’t easy, because I’m still a little dazzled by the fact that I own one. The N8008 was introduced in 1988, a couple of years before I started getting serious about photography, as Nikon’s top-of-the-line “advanced amateur” SLR, one step down from the vaunted F4 and surprisingly close to that camera’s abilities. Its $858 retail price ($1,785 in today’s dollars – just for the body!) was more than my first car was worth.

For a scruffy student like me, buying a Nikon N8008 (or the F-801 if you lived outside the US) wasn’t even in the realm of possibility. Hell, they’d barely let me look at the damn thing in the store. I hardened myself to that reality, clutching my well-worn Pentax KX to my breast and declaring that great pictures were made behind the camera, not in them. Let the rich show-offs of the world try to buy their way to a great photo – we ragged folks with our ragged cameras were making real art!

Secretly, I always wondered what it would be like to shoot with something like the 8008. And thanks to the Second Film Revolution and the accompanying Great Democratisation of Camera Prices, I now know! All-electronic cameras are ridiculously cheap, and the N8008 is ridiculously cheaper than most, for reasons about which I’ll speculate in a little bit.

So what’s it like? If, like me, you’re used to simpler mechanical cameras, the N8008 is rather intimidating at first. It’s massive, big enough to dwarf most of my other cameras and its own 50mm lens. The body alone, with batteries, film and a strap, is an ounce shy of two pounds (879g). The 50mm prime adds another 10oz (283g) to that, and the various zooms that came with mine add between 19.5oz (552g) and 25.6 oz (727g). If you ever hear me complain about the weight of my Pentax KX, you have my permission to mock me. 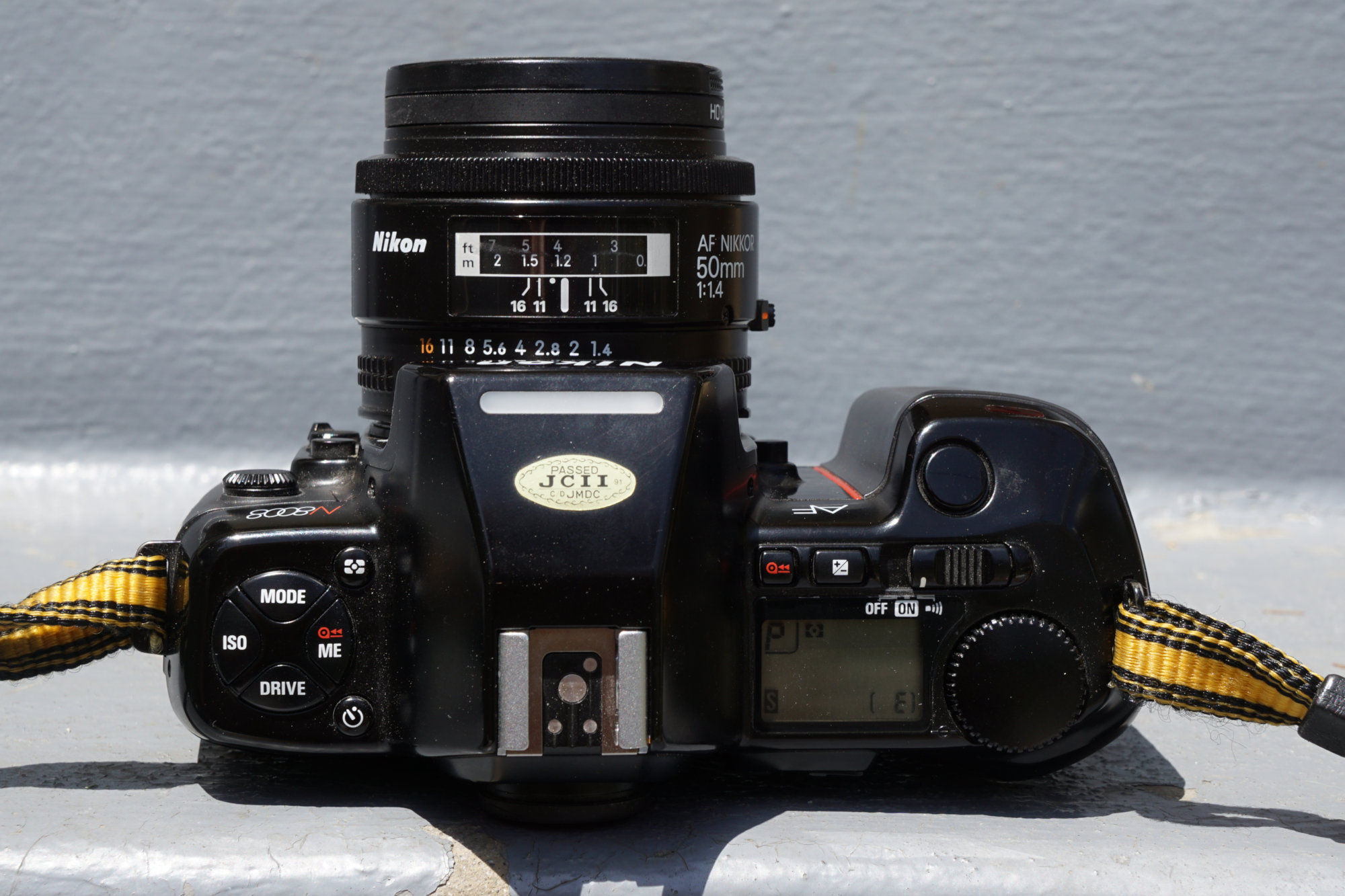 For most cameras I rarely even glance at the manual, but for this Nikon, the booklet is my constant companion. The 8008 pre-dates any standardisation of electronic controls, and it actually bridges the gap between old style and new. Aperture is still set by a collar on the lens, and a thumbwheel in the same orientation as a traditional shutter dial sets speed and other camera functions.

The N8008 has four shooting modes: Program (full auto), shutter and aperture-priority, and manual. There’s a high-speed program mode that favours faster shutter speeds for long lenses, and a “dual” mode that switches between the two based on lens length. There are no action, portrait or landscape modes; the N8008 operates under the (welcome) assumption that the person holding it knows what they are doing. There’s also no built-in flash.

For manual shooters, the N8008’s viewfinder has an LED display that shows selected shutter and aperture speeds and an exposure meter that is basically the electronic version of centre-the-needle. It can be difficult to see from some angles, particularly when turning the camera for a vertical shot. But does that matter? After all, the whole point of a camera like the N8008 is to let it do most of the work.

To that end, the 8008 has two metering modes. Matrix metering divides your scene into five zones and evaluates them all, so it can (supposedly) figure out tricky situations like an off-centre subject against a bright background. Centre-weighted mode works more like a traditional meter. One of the criticisms of the N8008 was that it didn’t have a spot-metering mode, unlike the lesser N6006/F-601, though this was added to the N8008S.

And, of course, the N8008 has autofocus with a motor in the camera body. It’s a bit slow and noisy by digicam standards, but I’ve found it to be very accurate and quick enough (read: quicker than me). The N8008 can focus once or continually adjust until you shoot; the former mode is focus-priority (no shutter release until focus is confirmed) and the latter is release priority (it’ll fire when you tell it, focused or not). You can also focus manually, but it’s tricky as the viewfinder really isn’t set up for it.

There are other odds and ends. The camera has a depth-of-field preview button and a self-timer. The N8008 reads DX codes and also lets you set film speed manually. Film loading is automatic but rewinding is not, and it requires pressing two buttons, reducing the chances of doing it by accident. The film advance can be set for single-shot or auto-winding at 2 or 3.3 fps. 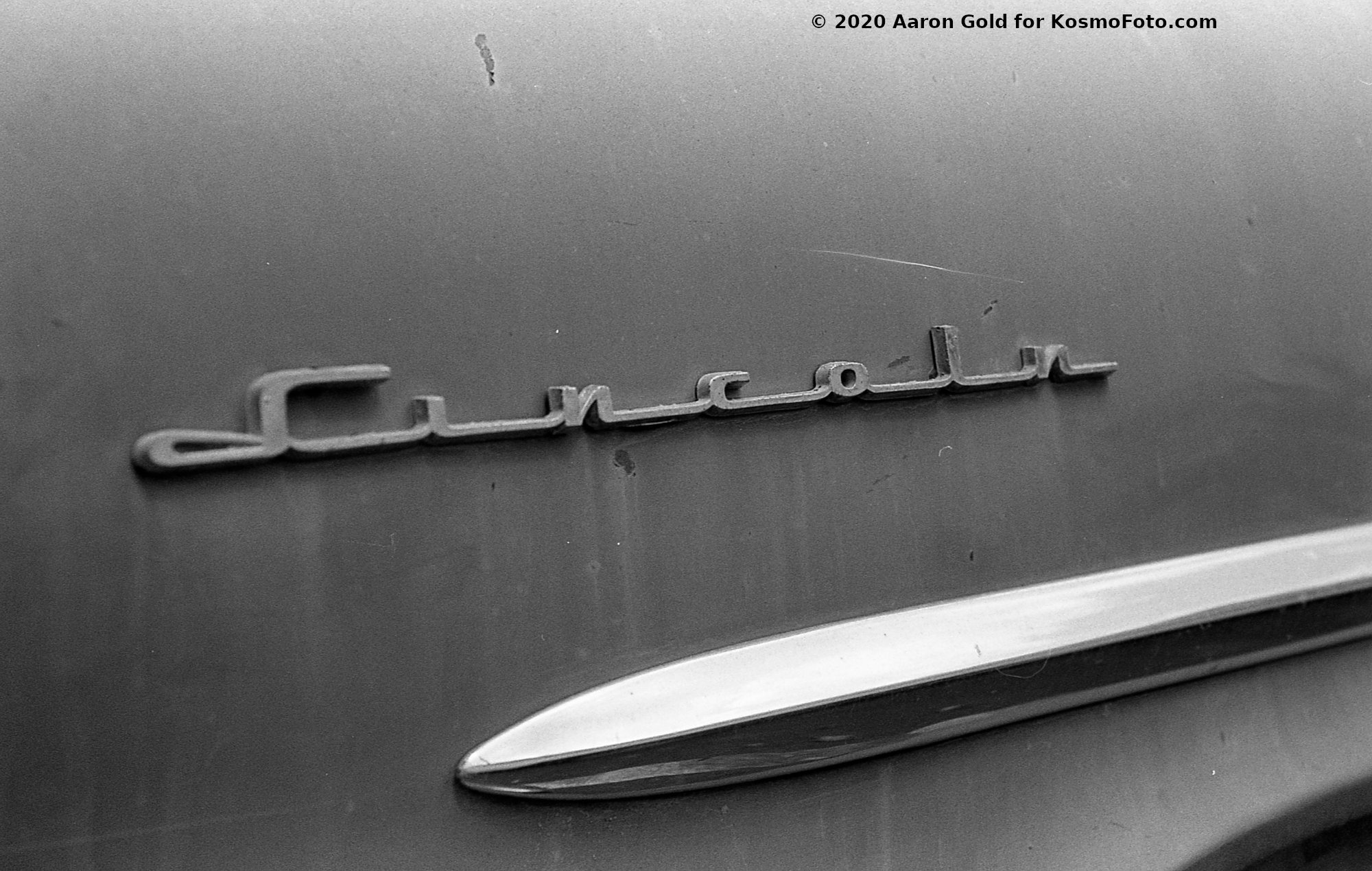 As I’ve shot with the N8008, I’ve found a lot of handy features. One is the range of shutter speeds, which go as high as 1/8000 of a second. I don’t do much action photography, but I like that if I have the N8008 loaded with 400-speed film and the sun comes out, I like that I can still shoot at larger apertures.

Another advantage is that it takes plain ol’ AA batteries instead of expensive lithium-ions, and they last a good long time. This adds to the weight, but that’s a decent trade-off—I rarely use my Minolta 400si because I fret about replacing the $12 battery. 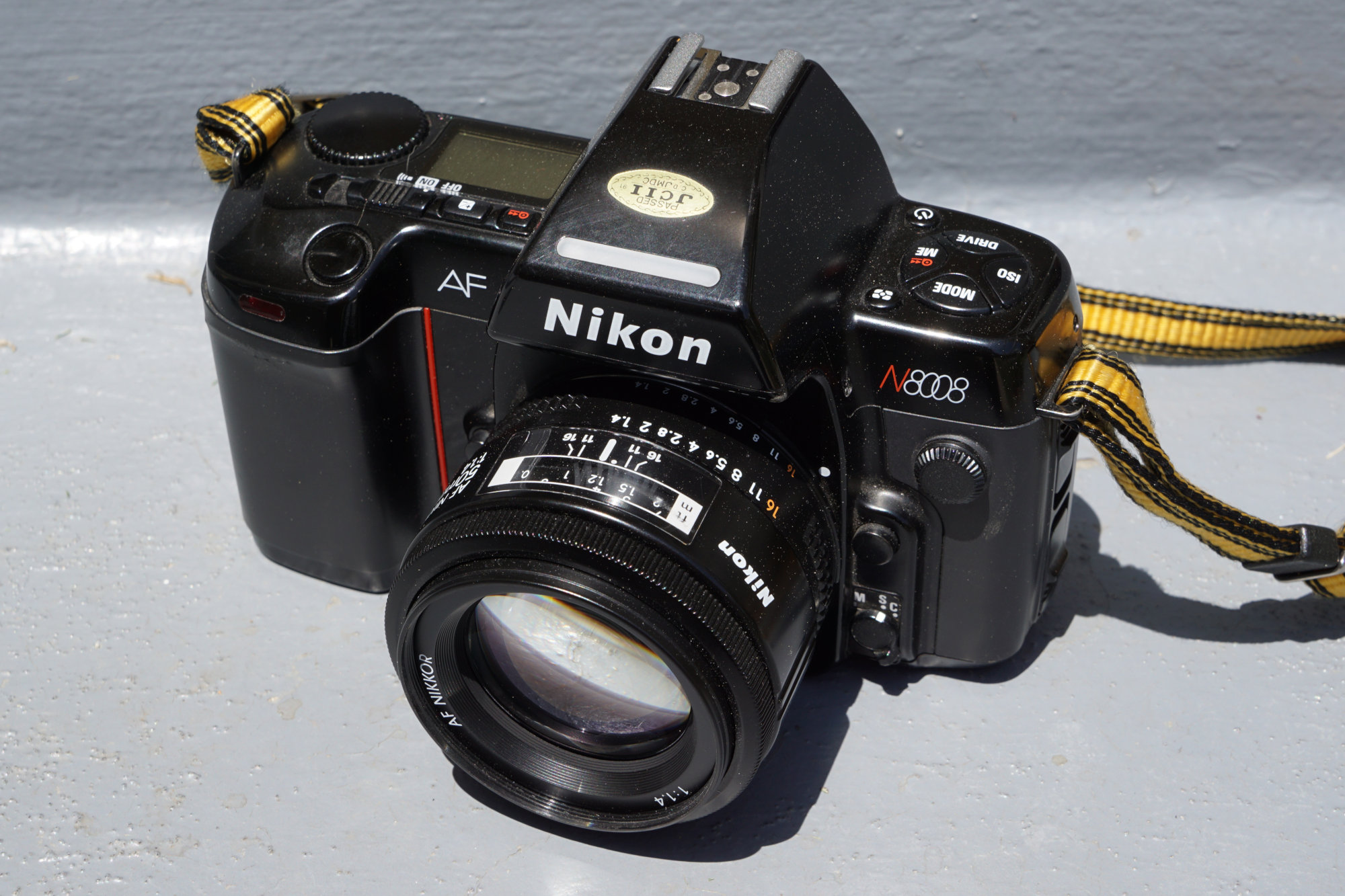 My results with the N8008 have been pretty good. The matrix auto-exposure system is a mixed bag: It usually gets things right (and does a particularly nice job on long nighttime exposures), but when it’s wrong, it’s really wrong, and it always seems to err on the side of overexposure. I can see why people complained about the lack of a spot meter.

Other than that, though, my results with this camera have been pretty darn good. No matter which lens I use, the pictures are nice and sharp with perfect focus. Overall I’m very pleased with the camera and can find little to complain about.

But I can’t really find anything to love, either.

For me, part of the pleasure of film photography is operating the gear, and the N8008 drains a lot of that fun away. I don’t mean to pick on the Nikon; I feel the same way about most autofocus SLRs. Even when I run the N8008 in fully manual mode (and really, what’s the point?), I don’t get the same satisfaction as I do with an older mechanical camera. The sound and the tactile feel just aren’t there.

Sure, it takes great pictures and will usually save me from my own mistakes – but I don’t necessarily want to be saved from my own mistakes. I want to learn from my errors and improve. With the N8008, I press the button and I know with 95% certainty the picture will be technically perfect, and that’s just a little too close to digital photography for my liking. It’s not a bad thing; it’s just not my thing.

That said, you’re looking for a super-smart, do-it-all SLR, I think the N8008 is one of the best buys on today’s market. Advanced electronic 35mm SLRs are bargains, and the N8008 and its slightly-upgraded sibling, the N8008S (F-801S) of 1991, sit in a particularly sweet spot. There’s no nostalgia price-premium, as few folks who were students back in the film days could afford them. Furthermore, the cameras that replaced them – the N90 (F90), N90S (F90x) and F100 – all had notable improvements to the autofocus and metering mechanisms and compatibility with newer lenses.

As a result, while the F100 commands hefty prices on eBay and the N90 is on par with a decent mechanical SLR, the N8008 is darn near worthless. You’ll find them selling between $10 and $50, with the N8008S a few bucks more – typically body-only, as most eBayers have figured out to separate the wheat of the lenses from the chaff of the body. Don’t let that worry you, though, because the first-gen Nikkor AF lenses are bargains as well: A 35-70 zoom can be had for $50-$75. I bought a full kit from a friend – body, four lenses with UV filters, and the bag they came in – for $100. Shop carefully, and you’ll end up with one of the most expensive and advanced cameras of its day and a couple of grade-A lenses for less than the cost of a Pentax K1000. And that amuses me to no end.

As the owner of several cameras, I’m very pleased to have a Nikon N8008 in my armada. If I’m in a situation where I absolutely, positively, have to get the shot – say, portraits of my friends’ dogs or good candids at a party – this is the camera I’ll grab. All I have to worry about is composition, and the Nikon does the rest. It’s like having a living, breathing assistant. 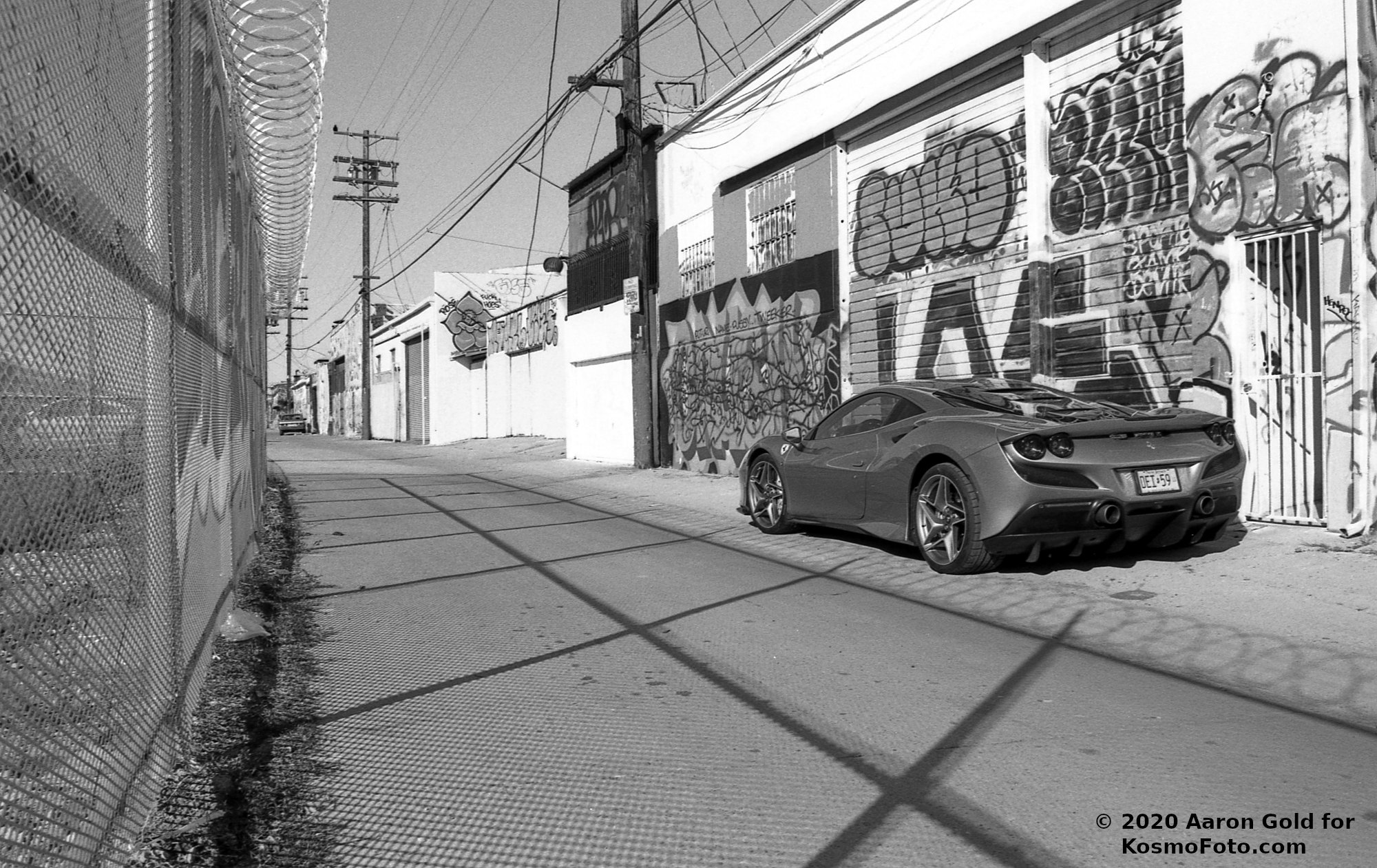 But for just knocking about and shooting pictures, when I have time to consider and compose, the Nikon usually stays on the shelf. For one thing, it’s bulky and heavy. For another, the N8008 makes things just a bit too easy—not only getting the right shot, but getting the wrong one. When the time comes to develop and scan my photos from the N8008, I’m always a little disappointed. I seem to get a lot more junk shots when I use the N8008. (Jim Grey came to a similar conclusion in his N8008 review.)

Don’t get me wrong—I am pleased (and amazed!) that I own one of these fantastic SLRs. Seeing as how I was able to buy one of Nikon’s best film cameras for a fraction of its original price, I would have been foolish not to. Still, I think my long-ago notion was right: For making art, this ragged old guy will stick to his ragged old camera.

Great article! I feel much the same about my Nikon N75, although that at least has the advantage of being smaller, lighter and about 15 years newer. It does the job, but it’s not an experience to use it.

Nice work with yours!

Way back in the day I had decided to bite the bullet and buy the F801s. I walked out of the store with the F90x instead. Fast forward to late 2019 where I picked up a N8008S from a guy in a parking lot for $40. Not my most loved camera, but one I enjoy to use.

I own an F801 and love it. It was a gift from a dear friend, which probably counts for half of why I love mine. The other half is it takes the same lenses as my Nikon D90 and D700. I can take my F801 out and about with either of my DSLR’s and be able to change between them without too much fuss. It’s a very capable camera.

Before I started or even thought of shooting film again, I sold off all my photo gear except this camera. Now that I shoot film again, I am glad I kept it. Yes it is heavy but the viewfinder is bright and clear, the modes seem digital camera familiar, and i find it consistent. I am just a hack but enjoy this camera. I have others but if I had to be sure of the results, I would pick this one. Thanks for the info. There are things I forgot about it ..and I do have the manual.

Dimosbox.gr Blog - 12 Things Not To Do When Buying Your First Film Camera -

[…] world of used film cameras, some of the most advanced cameras are among the cheapest. The N8008, Nikon’s top-of-the-line ‘prosumer’ camera in the late 80s, was priced three […]