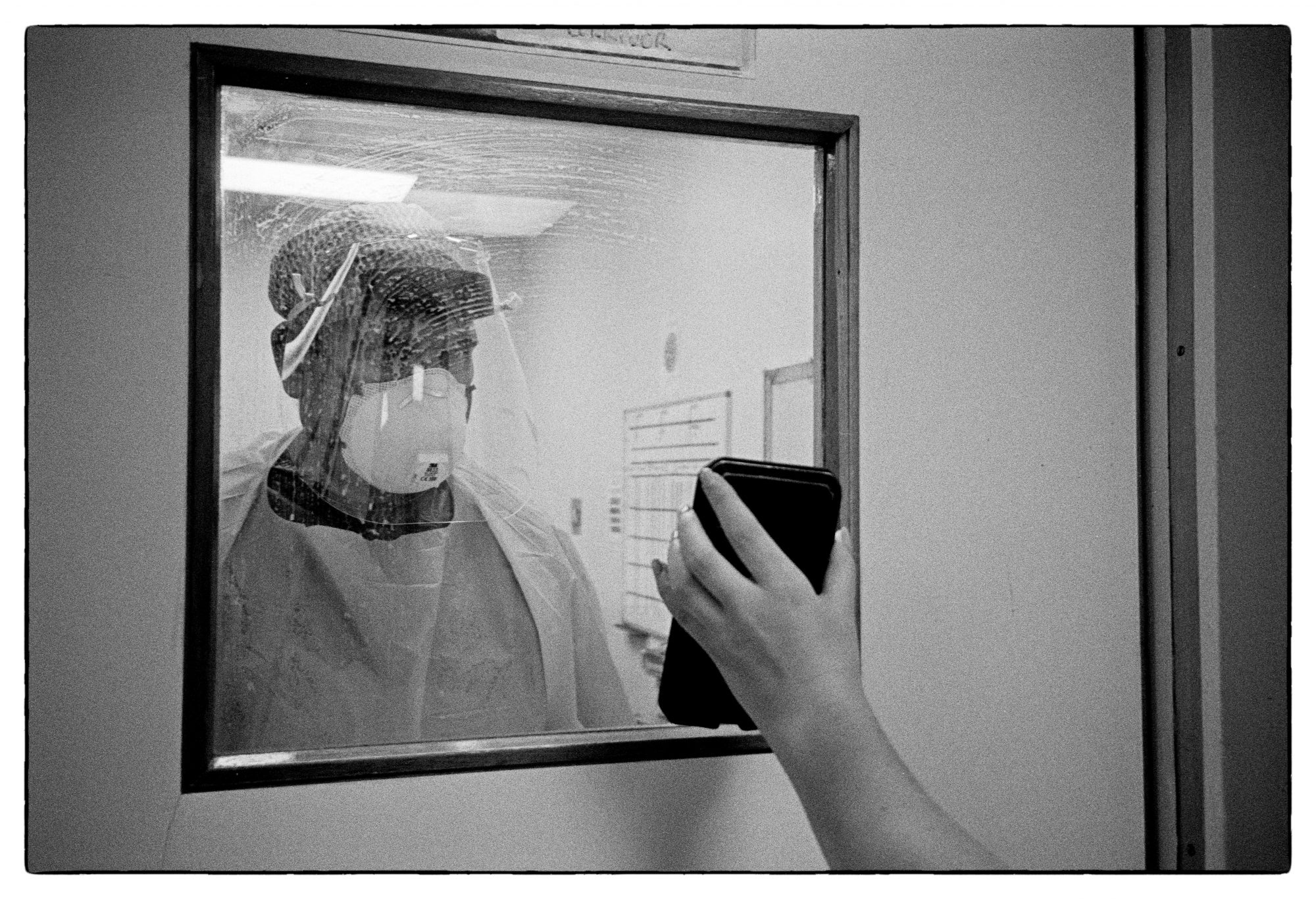 Home Interview David Collyer: Photographs from inside one hospital’s battle against a pandemic
KF article top

David Collyer works as an operating department practitioner, a role that sees him work alongside anaesthetists at a hospital in Abergavenny in Wales. He’s also an enthusiastic film photographer.

His role has given him a unique position to show what the fight against the coronavirus looks like in a busy hospital.

“During the current Covid 19 crisis I’m part of the team who intubate the patients ready for putting on ventilation, so very much a frontline role,” he tells Kosmo Foto.

He started taking one of his film cameras into work (an Olympus XA3) as the coronavirus pandemic hit Britain. Now, 92 of those images he shot on shift have been turned into a book, ‘All in a Day’s Work’, which is being published by Static Age this month. All the profits from the book will go to help mental health charities Mind and Campaign Against Living Miserably.

He told Kosmo Foto more about the project.

When did you come up with the idea for the book?
“The hospital I work in, Nevill Hall, in Abergavenny, is merging with another next year, and all acute services are going to a big new critical care centre, leaving only minor services behind.

“On that basis I’ve been thinking for the last couple of years about documenting the last year of services as they currently stand. When Covid-19 reared its ugly head, a whole new angle emerged. I sought permission to document what was happening, choosing to turn my camera on the staff, rather than wasting precious time by seeking ethical clearance to involve patients, which to be honest left me feeling a little uneasy. I was going to keep the whole project hidden from public eyes until the crisis had passed, but when I leaked a couple of unidentifiable images on to social media, Pete Falkous from Static Age Zines approached me about doing a zine. When he saw the material that I had, he suggested doing a book.”

How busy was the hospital you were working in?
“We were pretty busy. South Wales was one the national hotspots. It’s been a strange epidemiology to analyse because it’s been incredibly localised. I work in a District General Hospital in a rural area, and we had a lot of admissions with ITU (intensive therapy unit) overspilling so that we create more capacity in other areas.

“My previous hospital which is a huge major trauma centre in a major city, got off relatively lightly. We had significantly more ITU admissions despite our unit being a fraction of the size. It’s very bizarre.”

Talk us through what a typical day has been like?
“All elective surgery was put on hold early on, so that we could concentrate on whatever clinical need Covid threw at us. The only surgery that’s now going ahead is emergency work whether trauma or general, or Caesarean sections. All general anaesthetics are treated as Covid-positive, meaning we wear full PPE which is a nightmare as its so hot. We also have dedicated teams for intubating Covid patients ready for ITU.

“In many ways from my perspective it’s less busy than normal; there is quite a lot of time which to be frank is pretty boring, but the flipside to that is when it’s busy it suddenly becomes a very different environment. In anaesthetics we are used to treating every operation as an environment where things can change very quickly, so we tend to be used to the stresses of working at the edge of our clinical skills. A lot of the staff who work on the scrub side, including non-registered Theatre Assistants have been redeployed into ITU. I totally salute them, as this is far beyond their normal daily duties.”

What are the rules about shooting this kind of stuff in a working hospital?
“Very strict! It’s imperative to get clearance first. Once the subject had been broached with the departmental managers, I went straight to the top, and sought approval from the CEO who was incredibly supportive. From there I went to the head of communications, but to my delight she’d already been put in the loop by the CEO and the clinical director, so my work was done. I just confirmed with colleagues that it was ok, and it was in the bag.”

Why the XA3?
“Well, as I mention in the book I had romantic notions about wandering round with a Leica M3, carefully taking light readings and composing shots, but hey this is reality and I needed something that didn’t impinge on my clinical duties, and importantly that I could slip inside my scrub top on a lanyard, and wipe clean. I started with an XA2, but I wanted to be able to push to 1600 which I could do on the XA3 by putting insulation tape over the DX code on the Tri-X that I had chosen for the project. My son won an XA2 as a result of that decision!”

How long have you been shooting film?
“Well, I’m 53 in June and I did a gardening round when I was about 13 to save money for a Zenit-E, so do the maths! I had a darkroom for years but shut it in 2008 when I switched to digital. I went back to shooting film about two and a half years ago, and now I shoot it almost exclusively again, doing all my own processing. I much prefer the process. I think with digital there is a tendency to spend too much time reviewing and therefore missing shots. It lacks something for me. From an aesthetic perspective film gives me what I want.

“I was spending a lot of time in Lightroom or Silver Efex Pro 2 making my digital shots look like film. I didn’t really make sense. I also like the permanence of film, both from an end product and a hardware perspective. My Fuji X-pro will be a paperweight in five years’ time. My Leica M3 on the other hand was made in 1959, and with care will still be as good in another 60 years. I can pass it on to my son Ned (hence @nedsoldman) who is going to Uni in September to study photojournalism.”

How did your colleagues react to you having a camera?
“Pretty well to be honest. There were two of us with cameras, Glenn who is another ODP, and me. We are both known as being photographers, albeit in very different styles, and also, I’m a film shooter whereas Glenn is a digital photographer. After a while people stopped reacting to the camera, even when it was put in their face. One of the advantages of a close-knit team is that there is a bond of trust, and that certainly helps to break down any barrier. You also have to remember that theatre is called theatre for a reason. It has a tendency to attract more than its fair share of larger than life characters. 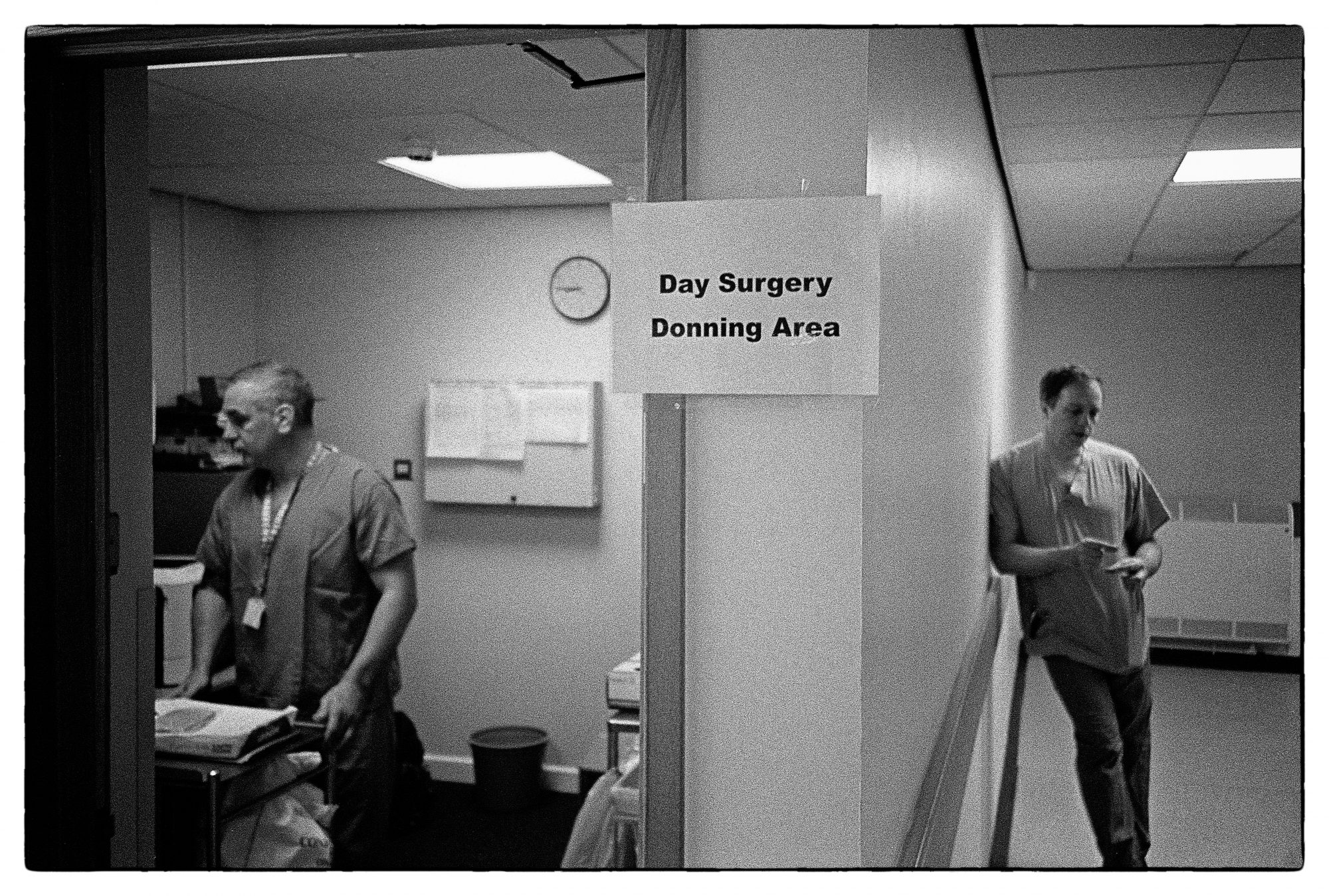 “Because of the way we work closely in teams, and the nature of the work we do, we tend to bond very quickly. On that basis we are good at looking out for each other’s welfare. It doesn’t take long to spot if someone is having a tough time, and there is a pretty good unspoken safety net in place to help those who need it. There will however always be a delayed fallout from a situation like this, which is why all profits from the book are going to two mental health charities.”

When will the book be coming out?
“The book went live for pre-orders a couple of days ago on the 29th April. It’s exceeded my wildest expectations. The initial print run was one hundred which sold within twelve hours, so we did another run of 100 which also sold out almost as fast. It’s made over £1,000 for charity which is staggering to be honest. I’m pretty gobsmacked. We are looking at doing another print run and doubling the numbers, and possibly doing a limited edition hard back. It’s been a bit of a whirlwind. 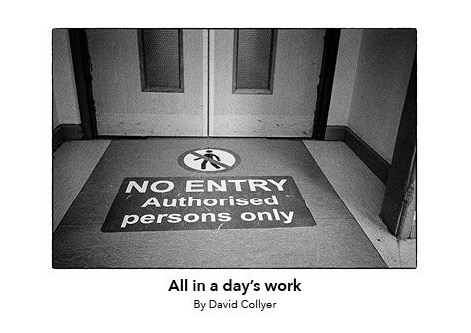 “I’ve gone from being a photographer that is fairly well regarded by the cognoscenti, but nevertheless fairly under the radar, to someone that people want to interview, and newspapers are publishing within a very short time. There’s that old joke about my overnight success only taking 35 years! But I owe a debt of gratitude to people like Andrew at Phlogger, Pete at Static Age, and of course Kosmo Foto for giving my work a platform.”

How do I get on a list to find out about the next print run?

+1 signing up for the next run of the book 🙂

Life as a Covid patient in Kazakhstan, captured on film - Kosmo Foto

[…] Photographs from inside one hospital’s fight against Covid-19 […]