I talked with old specialists from the Soviet factories LOMO (Lazar Zalmanov, St Petersburg) and KMZ (Vladimir Runge, Krasnogorsk). They do not have much information on Chinese/Soviet collaborations. Firstly, these were defence enterprises and then there was a mandatory subscription not to disclose state secrets. Secondly, more than 50 years have passed. Specialists from these enterprises, who were sent to China and worked at Chinese factories, have long since retired or died.

In Germany, they often say about the Kiev-2 that it is a German camera made in Russia. Likewise, many cameras made in China are Russian, because they were created by the labour of Soviet scientists, engineers and technicians in Chinese enterprises. OEM assembly from ready-made components is not an indicator of your own success, but a hint of someone’s help. Soviet cameras were produced at least at three factories in the PRC. At the Beijing Da Lai Factory, the “Optical Equipment Factory” in Nanjing, (Nanjing Movie Camera Factory) and the Northwest Optical Instrument Factory in Xi’an.

Xinhua News Agency announcement of the release of the 「大 來」 DaLai Camera in August 1956.  Below is a translation of a note from the newspaper:

“At the DaLai Precision Instrument Plant in Beijing, pilot production of 12 Soviet Zorki-type cameras has begun. With the exception of the optical glass for the lens of these cameras, all parts are produced by our workers and technicians. 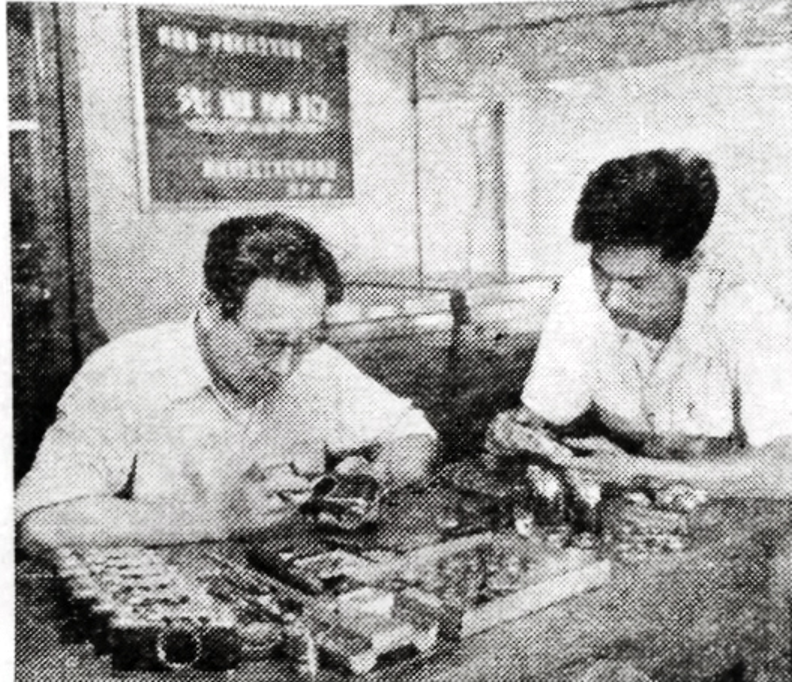 At the end of 1955, 12 rangefinder cameras based on the Soviet Zorki camera were assembled at the Da Lai Beijing plant (Dalai).

On 1 August 1956, a new camera (大 来) “Dalai 135” was announced in the People’s Daily. It was a report from the Workers’ Party at the Dalai Engineering Plant. Chronologically, this was the first modern camera in New China.

Read part one of the series here

But the report on the Dalai camera was published in the Rabochy Day newspaper a month later than the report on the release of the Seven-One camera. On 2 July 1956, the Tianjin Daily reported on the Qiyi camera (七一) issued by the Tianjin State Enterprise. For this reason, many consider (七一) “Seven-One” to be the first Chinese camera.

The Chinese magazine “People’s China” was also published in Russian. Here is a note from No. 13, published in June 1957. In fact, this is a Soviet KN-11 film projector.

In the magazines of the time, the “Optical Equipment Factory” in Nanjing, the capital of Jiangsu Province, was referred to as the “Nanjing Movie Camera Factory.” In fact, it was a large defence plant built for the PRC by Soviet specialists. In addition to film technology and cinema projection systems, the plant produced optical devices for the aviation, navy and army of the PRC. It was here that the camera (南京) “Nanjing” (a copy of the FED-2 rangefinder) and the first Chinese 35mm SLR camera (紫金山) “Zi Jin Shan” (a copy of the first Zenit) were produced.

Rangefinder camera “Nanjing” – a copy of the camera FED-2

When the first version of the Shanghai 58-I rangefinder camera was tested at the Shanghai Photo Factory in 1958, a trial series of 100 rangefinder cameras was produced at the Optical Equipment Factory in Nanjing. They were modelled according to sketches of the Soviet FED-2 camera. The trial lot was called (長江) “Nange” – after the name of the Yangtze River that flows through Nanjing. In 1959, an improved version of the camera was named (南京) “Nanjing”.

The number of cameras produced was respectively 600 and 2,000 units. The preparation and production was carried out in a short time. The Nanjing camera was made as an alternative to the Shanghai 58-II camera, and is sometimes referred to in China as the Nanjing 58-I. The Nanjing camera is the only camera produced in the PRC where the name of the plant is indicated on the front side of the camera. Between the square of the viewfinder window and the rangefinder window is written: 南京 光学 儀器廠 – “Nanjing Optical Equipment Factory”, and 中国 制造 – “Made in China.”

The release of this model was stopped at the behest of management. The wording was illogical: since you have a “movie camera plant”, then only produce movie cameras. (At the time, 16mm movie cameras were being produced in Nanjing in collaboration with technical experts from the Soviet Union.) Therefore, the Shanghai 58-II camera became the first mass-produced camera in China. Before relations with the Soviet Union cooled, 66,800 were produced.

In the same year, 1959, simultaneously with the Nanjing camera, the plant assembled the first 35-mm single-lens reflex camera in China. It was named “Ji Ying Shang” or “Purple Mountain”.

Nanjing is a city that had long been the capital of China. The Purple Gold Mine is one of the most scenic spots in Nanjing. Therefore, the name “Purple Mountain” is also associated with Nanjing.

The letter “Z” – the logo of the Nanjing plant, is engraved on the tag in front of the inscription “Zi Jin Shan”. It was the pride of the Nanjing specialists that they surpassed the technically advanced Shanghai.

Camera (紫金山) “Zi Jin Shan” was modelled after the early Soviet Zenit. The appearance of the body at first glance does not quite look like a copy of the Soviet SLR, but all the units are the same: the shutter cocking knob, rewind knob, shutter release button, shutter speed dial. Design for the Purple Mountain began in September 1958. They used the Pentacon produced in the GDR and the Zenit from the USSR. They chose the Soviet Zenit, as it turned out to be easier to manufacture and “stronger” in operation.

In 1959, the product went on sale for 150 yuan. It was impossible to meet the demand. The good reception was due to the excellent lens and reliability of the camera. In the shortest possible time, about 1,000 pieces were produced and sold. In 1960, the camera (紫金山) “Zi Jin Shan” Z 135-I was exhibited at the Guangzhou Export Trade Fair. However, then, “due to natural disasters and other problems”, the national economy faced a crisis and other difficulties.

(While reading Chinese publications, I noticed a certain amount of airbrushing has taken place. While the preparation and adjustment of production was going on, the Chinese comrades thanked the Soviet specialists for their help. But after the start of production, the result was presented as an achievement of the Chinese side, without any outside help.)