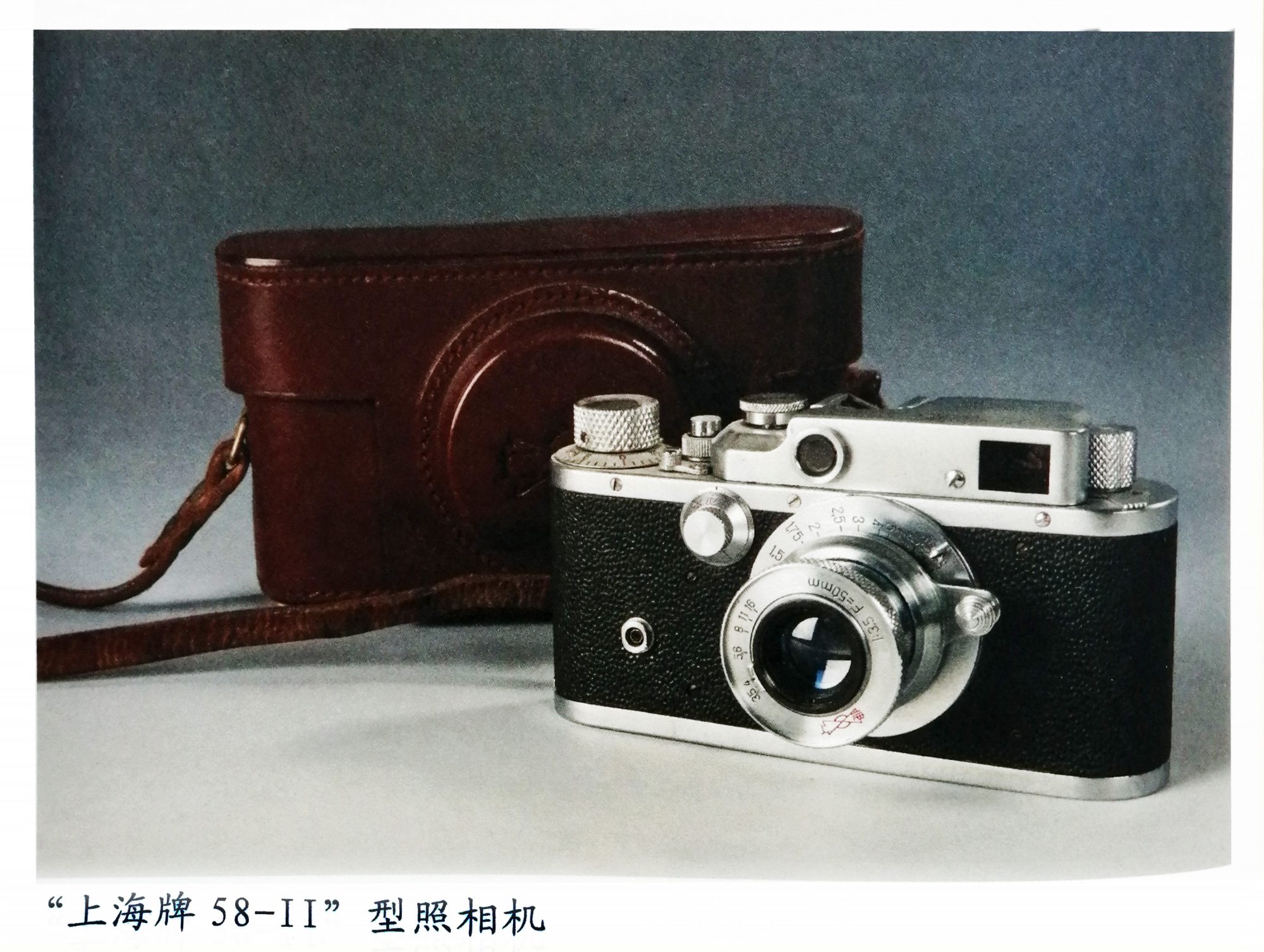 This is the third of a three-part series by Russian photo historian Vladimir Zverev looking at Soviet involvement in the Chinese camera industry.

You can read the Part One of the series here, and Part Two here.

The North-West Optical Instruments Plant
This plant produced the Soviet cameras “Lubitel” and “Smena“. This is another manufacturer of Soviet cameras from the PRC. The North-West Optical Instruments Plant is a large defence plant built by Soviet specialists in Xi’an. Among the “peaceful products” produced at the plant were cameras (长乐) “Changle” (copy of the Lubitel) and (华山) “Huashan” (copy of the Smena).

These cameras had the same drawbacks as the Soviet originals, because, of course, they were faithful copies.

Camera (长乐) “Changle” (Lubitel copy)
Camera (长乐) “Changle” was one of the first TLR cameras produced in the PRC and the first commercial dual-lens reflex camera in China. The Russian inscription “T-22” is left in the lens marking. Due to the limited number produced, even in China it is a rarity among collectors. This is a copy of the Soviet Lubitel which, in turn, was a copy of the German Voigtlander Brillant and was produced under a reparations agreement. The name “Changle” comes from the name of the road in front of the factory.

Camera (华山) “Huashan” (Smena copy)
Initially, a copy of Smena was planned to be produced in Chongqing, and at the plant in Xi’an, thanks to the efforts of Soviet specialists, a production line was prepared for its manufacture. Moulds for casting the chamber body, plastic and blanks were supplied from the USSR. The shutter and lens were also Soviet. There is even a Russian letter “P” in the lens markings, which signified antireflection coating on Soviet lenses.

They decided to name the camera (长江) “Hang Jang”. This, in the local dialect, sounds like the words for “Yangtze River”. In the Soviet press, the camera was called the Yangtze Camera. But mass production in Chongqing could not be established due to the low skill of the assemblers. Therefore, in 1959, the production line was returned to Xi’an and the camera was manufactured under the brand “Huashan” (since Xi’an is located near Huashan Mountain).

If you take away the name, it is almost impossible to distinguish the “Yangtze River” from “Huashan”. The (华山) Huashan is often seen in used camera stores in China, but (长江) Yangtze River is much less common.

In 1954, Soviet Premier Nikita Khrushchev was on an official visit to China. As usual, gifts from the government of the USSR were brought from the Kremlin. As a gift to the Vice President of the People’s Republic of China, Comrade Dong Biwu (董必武 – Dong Biwu), they presented a photographic set. In a box made of noble wood there was a camera Kiev-ll and a set of lenses for it (a professional camera in full set).

Dong Biu at that time served as Deputy Chairman of the State Administrative Council of the PRC. Such diplomatic gifts were usually made with a transparent hint. With the proviso that the Soviet Union helped shape the industry in China at the time, it was like a proposal: “We can help you get such a camera going.” At that time, only Nikon had the technical knowhow to replicate the German Contax II rangefinder.

However, the Chinese comrades reasoned that the production of the Kiev cameras (the Soviet copy of Contact ll) had been established by German specialists, and the lenses for them, labeled ZK, (Zonnar Krasnogorsky), were made in Krasnogorsk, where the Zorki cameras were assembled. Therefore, the PRC refused the difficult-to-manufacture camera “Kiev”. Instead, the Soviet Zorki rangefinders became a model for the Chinese Dalai and Shanghai cameras.

The development of photographic equipment and optics is an expensive and complicated business. The Soviet specialists, under reparation agreements at the end of World War II, got the German developments and patents, which they then shared with their Chinese comrades. Imitation of foreign models of photographic equipment was a forced measure due to the technical backwardness of the production base of the PRC.

At first, these were simple models of cameras, modelled on the socialist allies. In those years, many copies of cameras of the partner countries of socialist construction were produced in China. So the clones of the Czech camera Pionyr were cameras (跃进) “Yuejìn”, (蓝天) “Lantian” and (宏伟) “Hongwei”. The Hungarian camera Mometta lll was produced under the brand name (西湖) “Si Ha”.

At one time, the Chinese side accepted Soviet developments with gratitude. However, now we often hear such things as: “The Soviet Union relied on the technical developments of the defeated countries, and although it reached its peak in the camera industry, after these developments were exhausted, the vision ceased to exist.” Running a little ahead of myself, I will say that Chinese manufacturers of photographic equipment “stepped on the same rake”.

Over time, domestic buyers became pickier, and they began to look for the best photographic equipment they could afford

The collapse of the Chinese photography industry came from copying other people’s ideas. Why did Chinese cameras disappear? Due to the fact that Chinese manufacturers did not invest in research in this area, but stamped out-of-date models while they were still being sold. But over time, domestic buyers became pickier, and they began to look for the best photographic equipment they could afford.

The Shanghai 58-II camera is considered the first camera to be mass-produced in Communist China. In September 1959, to commemorate the 10th anniversary of the founding of the People’s Republic of China, the first 500 cameras (上海) Shanghai 58-II were sent to Beijing. A total of 66,800 units ended up being produced.

Here is an excerpt from a contemporary memoir by the creator of Shanghai -58. “… Initially, we wanted to imitate the Zorki camera, but then we found that it was not sufficiently developed, but simply an imitation of Leica. Therefore, managers and assemblers reasoned that if there are already such cameras in the North, Shanghai should not copy them, but will find the most advanced products in the world to follow…”

Although Shanghai manufacturers claim this is a copy of the Leica IIIb, there is ample evidence that this is not the case, and the production camera Shanghai 58-II was assembled from the components of the 1955 Zorki camera.

The first argument is the external similarity to the Soviet camera. This includes knurling on parts, a type of coating (vulcanite), and a flash synchroniser, which at that time (and in the same place) appeared on the Soviet Zorki camera. The lens barrel of the Shanghai 58-1 camera resembles the lens of a Soviet camera, but not a barrel like on the Leica IIIb. When disassembling the camera, many more details show the Soviet influence.

The second argument in favour of the Shanghai 58-II being inspired by Soviet designs is the dramatic fall in quality of the Shanghai 58-II. “After certain events”, by September 1961 the quality decreased so much that sales fell and production was stopped. The Seagull company later said production had been discontinued due to problems with “deliveries”, and deliveries until 1960 came from you know where.

In conclusion, it can be recalled that many other Soviet photographic technologies and optics were produced in the PRC. Soviet mirror-lens lenses in 500mm and 1000mm focal lengths, aircraft machine gun cameras, and lenses based on the Russar design. For covert photography, copies of the Soviet F-21 spy camera called “Kamera1503” were produced. You can learn more about this technique from Wang Shiyuan’s book ‘Collection of Chinese Cameras’. This is the most voluminous list of Chinese-made film photographic equipment to date, written by a Chinese author and published in China. (I have since translated the book into Russian).

P.S. In China, as in many countries, the interest in domestic film photographic equipment is gaining momentum. Therefore, the prices for older cameras is going up. “Soviet” Chinese cameras can still be found on the domestic market, prices start from 5,000 roubles (£50/$65).

Very nice article about cameras of the Empire of the Middle. As a curiosity, Nikon did not have the expertise to produce a Contax derived camera, not at that time or at any time. The Nikon S series of cameras only borrowed the looks and more or less the bayonet mount. The shutter is 100% Leica style as is the viewfinder/rangefinder set up. The Contax rangefinder cameras were never copied because of its complexity and cost (the Kiev is a Contax made on the USSR, not a copy). 🙂

Great articles on a too long ignored aspect of photographic history. However, you should mention that, since the 1990s, Chinese photo industry has restarted in earnest and now making excellent products, especially lenses -witness the Viltrox, 7Artisans, TTArtisans, Zhongyi Mitakon — and many many other brands. Not to mention medium and large format cameras, and the fact that many / most Japanese camera companies have factories in China…

Thanks Alan – worth exploring in the future, definitely. This series focused just on that period between 1945 and 1960.

Into the ‘80s they did make some interesting cameras like the Phoenix 205 and the Great Wall medium format SLR, as well as the well known Seagull TLRs….and Seagull Minolta Mount 35mmm SLRs… it is amazing how the Chinese photo industry changed, evolved, went through all these ups and downs …