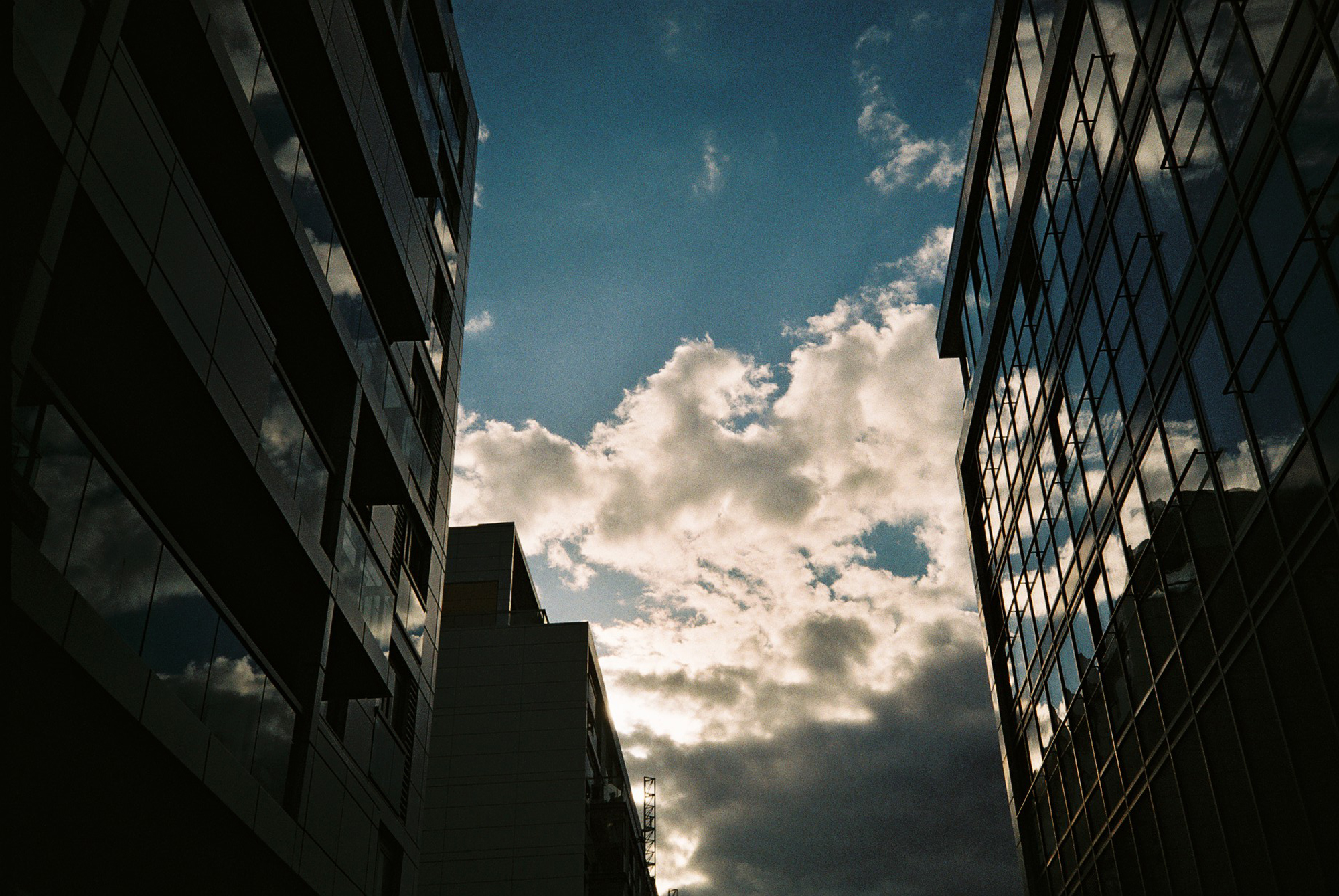 Outside of Japan, it isn’t the easiest film to find.

Everything about Fujicolor Industrial 100 box packaging hints that it plays hard to get. Nothing other than the name and the technical information – ISO and number of frames – is printed in English. Everything else is in Japanese script, green writing on a plain white box. There are no enticing colours or graphics to grab your attention.

Then there’s the name, which conjures up the image of a film made for technical photography in a lab or medical establishment. It hardly enthuses you to load it up in a camera and run out to document the world around you.

However, that staid name might be a case of bad translation. As blogger Alex Kunz writes, a better translation of the name (業) 記録用力ラーフィルム [(gō) kiroku-yō-ryoku rāfirumu] might be “Fujicolor Commercial Film”. But “Industrial” seems to have stuck.

What would have once been a Japan-only film, thanks in part to the internet and the growing resurgence in film, can now be found in other countries too. In the UK, it’s getting easier to find, but isn’t exactly cheap; most places stocking a 36-frame here in the UK sell it for around £11, so it is definitely not an off-the-cuff purchase.

I’d seen plenty of posts about this film on Instagram before I found it for sale at The Photographer’s Gallery in London. While I definitely have my favourite emulsions, especially when it comes to colour films, I’ve been enjoying trying other films for this First Roll series; after all, you don’t know really know whether you’ll like a film until you shoot a roll of it. I bought a roll of it before Christmas last year and waited for the London sun to show its face again.

Last month, I popped the roll into a Ricoh FF-9 compact and went for a weekend walk around Greenwich. The Ricoh is a late 80s 35mm compact that until recently could be bought for next to nothing – this example cost me £9.50 off eBay a few years ago. People seem to have finally woken up to how good Ricoh’s range of FF compacts are recently, and prices are rising. Think of the FF-9 as a slightly less refined version of the Olympus Mju-I; it has only a fraction of the Mju’s autofocus zones (only six instead of 100) but it boasts a lens just as wide. I’m always blown away at just how good this unpretentious 80s camera is.

There’s a rule of thumb when it comes to Fujifilm’s colour films that they will always look a little cooler than their Kodak counterparts; it’s not something I’ve ever tested seriously with side-by-side shooting and testing, but anecdotally it’s something I can definitely get on board with. To me, Fujicolor C200 definitely seems to have less warmth than ColorPlus 200, for example, and the now-long-gone Reala 100 didn’t seem to accentuate yellows and gold quite so much as Kodak’s Ektar 100.

The examples I had already seen on other blogs suggested that this was a film that called for bright sunshine, something to counteract is tendency to veer towards blues and greens. It’s fantastically fine-grained, and in good light has a metallic sharpness – something I think you can see in the eye-popping colours in the shot at the top of the post. 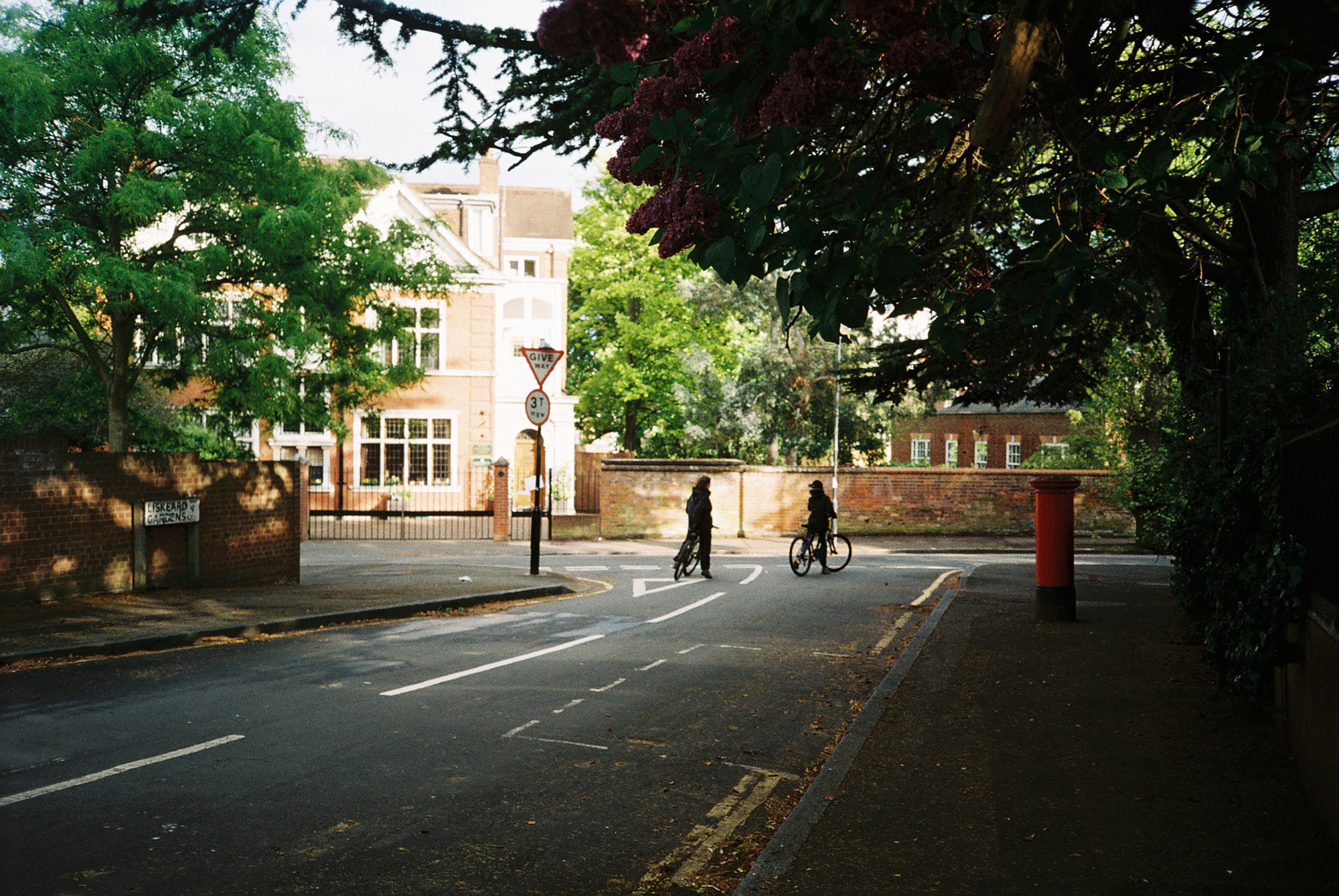 Like many of Fujifilm’s colour negative films, there is a tendency for red to dominate, but this seems to be less noticeable in bright light; I get the feeling the green/red bias is exaggerated more in muted light. I’m not a big one for shooting colour in overcast conditions anyway, so on this roll it wasn’t a problem.

Some of those who’ve shot this film have reported much more grain than would be expected from a 100-ISO film, but that’s possibly a sign of the dearth of 100-ISO films around these days; Kodak Ektar 100 is certainly one of the most fine-grained films created, and it’s possibly spoiled us in that regard. But certainly if you compare it to Kodak’s budget-minded Pro Image 100, it’s not out of the ordinary.

Bright light and the Ricoh’s sharp, capable lens combined to create some pleasing photos – before the summer is out I’m inclined to see how this film looks on an SLR or two. But one thing I won’t be expecting is saturation.

Oh and the Photographer’s Gallery is a great place to pick up film! I was surprised to see that some films are actually cheaper than online, and that’s without factoring in delivery costs. The staff are knowledgeable too, and happy to answer questions. (Now I’m starting to sound like an advertising bot, but I have no affiliation with the gallery!)

I’ve been interested in buying this film for awhile. The colors look so nice! Thanks for sharing.