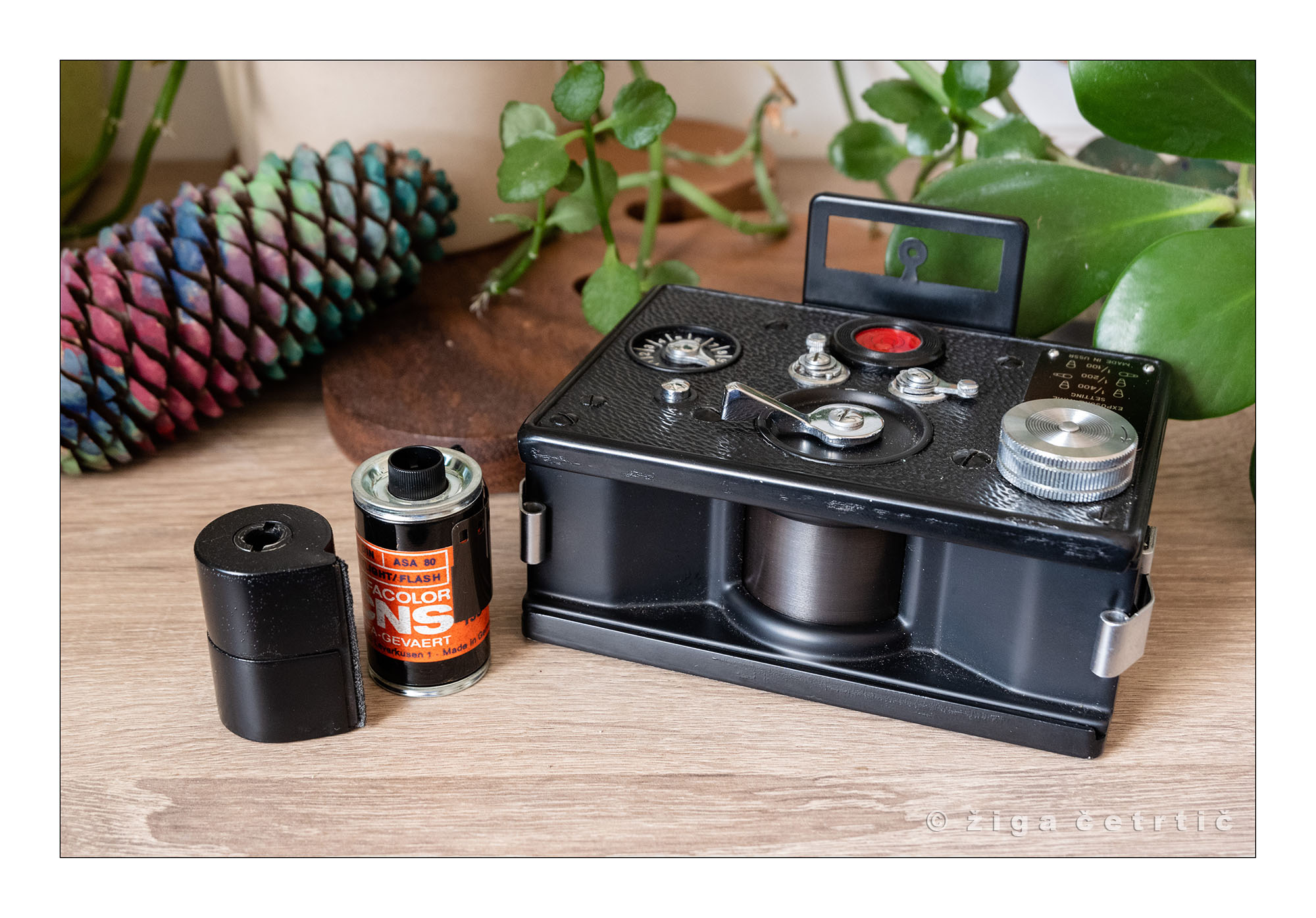 There are many ways to be peculiar. Seems like the Soviet KMZ FT-2 camera went through the peculiarity list pretty thoroughly and checked many boxes. Take its appearance; most people wouldn’t mistake it for a camera. The user interface makes even an experienced photographer’s head itch. That said, it was based on the design by a Soviet weapon designer Fedor Vasilievich Tokarev and should primarily serve as a camera to verify the accuracy of artillery, as some sources claim.

The FT-2 is a brick, but much smaller than you’d expect. When I first got it I was surprised; it’s actually a very cute little black brick. The only thing that gives away its purpose is a screwed-on metal plate with a strange pictogram under a note “exposure time setting”. If it wasn’t made for export, the plate would have been in Cyrillic transcript and would thus make the device even more mysterious.

The camera’s form factor is dictated by its photo acquisition approach – FT-2 is a swing lens panoramic camera. During exposure, the lens pivots around the central axis and projects the image to a curved film plane. Contrary to a fisheye wide-angle lens, this approach doesn’t cause any barrel distortion of vertical lines, if held horizontally, and doesn’t stretch the perspective as geometry corrected wide angle lenses.

The FT-2 uses a lens with a 50mm focal length, which further reduces the impression of the remaining distortion compared to cameras of a similar type like FT-2’s successor the KMZ Horizont and a Japanese sibling the Widelux, which use 28mm and 25mm wide angle lenses respectively.

An FT-2 negative covers a 120 degree angle of view horizontally, resulting in a 110-mm-long image area on an ordinary 135 film. Despite the standard film format, a 135 film cartridge won’t fit straight into the camera – one needs to respool the film to the proprietary cassettes. And like that isn’t enough, the cassette for an exposed film is different from the one for an unexposed film. When new, four cassettes were enclosed with the camera, but are nowadays often lost. 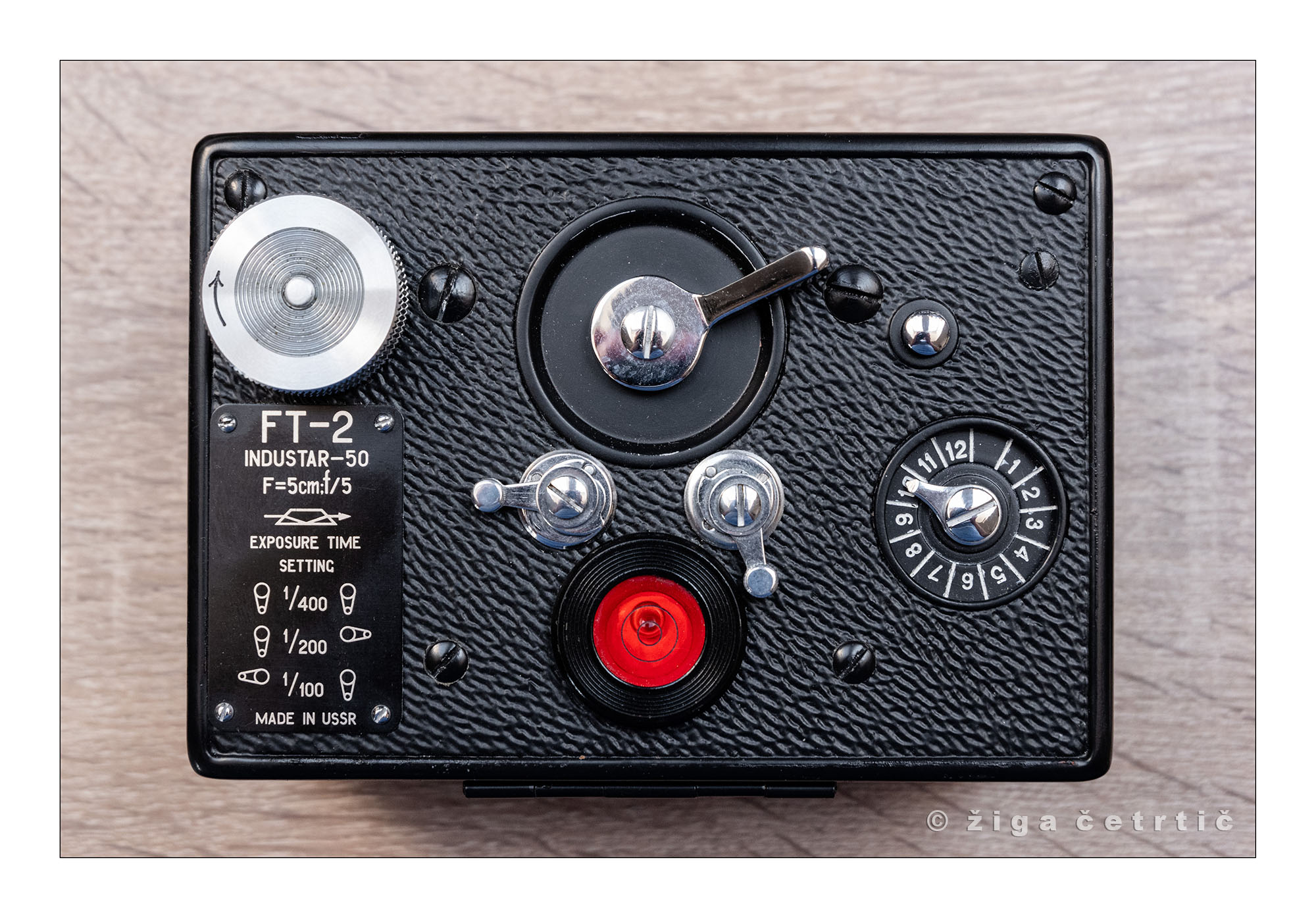 The built in 50mm Industar lens has a fixed f5 aperture and a fixed focus somewhere around hyperfocal distance. It is said that the lens is actually f3.5, however, since the image is projected to the film through a vertical slit, the effective aperture is indeed f5. The exposure time is set via two shiny levers on the top. Different exposures are achieved through a variable rotation speed. Each of those levers utilises a mechanical break mechanism that slows down the turret rotation.

For the 1/400 s there is no brake applied, which causes quite a violent end to the turret’s travel. Other offered exposures are 1/100, 1/200 and, as some claim, 1/50 s, which is achieved by applying both brakes at the same time. (You won’t find this in the user manual, however.) This gives little room for a precise exposure control, considering the fixed lens aperture and calls for use of an ISO100 or even slower film.

The shutter, or better said the turret spring, is tensioned through a central handle that’s uncoupled from the film advance. To prepare the camera for the next photo taking, one counts the exposure counter rotations while turning the knob on the top left and stop after the exposure counter indicator does three full rotations plus one index mark. If you already took 12 panoramic exposures on a film rated for 36 “normal” exposures and you can still advance film, you miscounted turns at least once and have probably partially overlaid your photos.

There is no proper viewfinder. A metal frame on the back kind of helps framing the image, but is far from precise, depending on one’s nose size for an accurate “display”. On the other hand, a red spirit level is not just neat looking but also very useful when taking a panoramic photo without unwanted distortion.

At least the shutter button seems familiar, but then again one needs to utilise a right-hand thumb to press it. And keep other fingers away from the turret tensioning mechanism since it rotates during the exposure.

Once one masters taking photos with this unusual camera, the next challenge is to work on the developed film. While developing, naturally, isn’t an issue, printing or enlarging it is. Originally some professional enlargers were big enough, but it’s not common to come across them nowadays. To digitize, holder masks for flatbed scanners usually have vertical reinforcements that help keep each 24×36 mm exposure flat but make scanning the FT-2 panoramic negative impossible.

Medium format holders, on the other hand, are too small. Not mentioning that, when one discusses panoramic photos in the photo lab, only a masked panoramic mode of some 90s cameras comes to their mind which is nothing else than throwing away a big portion of a negative with an “in camera analog cropping”. I ended up using a light table, some metal rulers to hold the negative kind of flat and a DSLR with a macro lens to digitise FT-2 photos. Stitching in post processing is also an option.

I am impressed with the results. Photos are detailed above expectations for a fixed focus f5 lens. There were no banding and light leaking issues. Banding is caused by an uneven turret rotation and usually requires some cleaning and lubrication of the internal brakes. If you encounter light leaks, check the shutter button sealing in addition to obvious places like the removable film compartment cover seals.

The wide format of the images is unusual, pleasant, challenging to frame and rewarding at the same time. Nature photography is probably the most appropriate subject for the FT-2, however, I like it also for street photography. One advantage I find when taking photos with the FT-2 is that people clearly don’t realise what you are doing.  Sometimes I sense that on captured faces. And even if they somehow figure out you are taking pictures, they have no idea how wide the field of view is and have a false feeling of not being part of the photo.

Tempted? FT-2 is one of my favourite cameras from my collection. If it wouldn’t be in such a nice condition, I would use it much more. I hope I get another one for a good price. One that shows clear signs of use. Oh, silly me…

Shooting on ‘crap’ compacts (Part One)

I just bought one for € 150. One metal cassette for the film, one plastic to roll up. Works fine, no leakage, no double images, I like the 50mm look, my Widelux is many times too wide. Will develop the film in my own darkroom….

Bought my ’58 KMZ FT-2 back in December 2014… It had the lens moved for close focus but I managed to get it back where it should be, after all it is a camera mainly for landscapes. It was on sale with it’s case and both casettes and I was fortunate to find another casette set for 20€! I have two photos taken with it printed on canvas in my living room walls… One b&w 1.30m wide and the other colour 1.70m Had a Horizont also. Another great panoramic camera with a killer viewfinder, easier to use but with an… Read more »