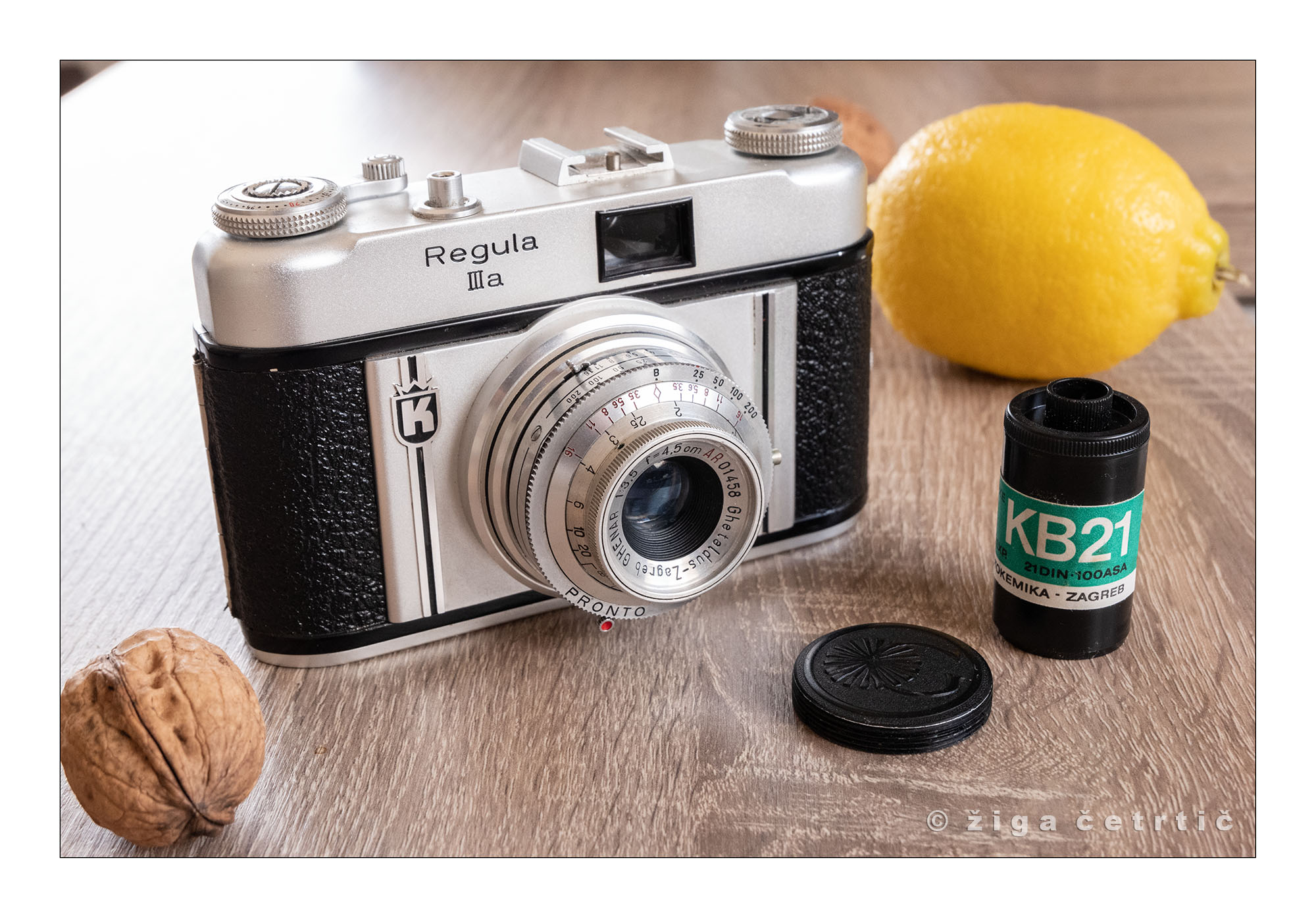 Viewfinder cameras are nowadays praised because they offer photos with special character. However, “special character” can often mean “crappy quality and thus unmatchable aesthetics”. Not that there’s anything wrong with that, but what if I presented you a non-crappy viewfinder camera with a historical political twist? Behold the Ghetaldus King Regula IIIa, made during the peak of Cold War in a member of the Non-Aligned Movement – the Federal People’s Republic of Yugoslavia.

Ghetaldus was a Yugoslav optics manufacturing company situated in Zagreb, today’s capital of Croatia. The company still exists, but there’s not much left after the collapse of Yugoslavia than a reselling business for prescription glasses.

The Regula IIIa has a well-built sturdy metal body. It weights close to half a kilogram and gives you confidence that it can withstand more unpleasant situations than the Soviet bakelite competition of the same era. The leatherette has a nice feel. Despite not being in the “prettiest camera club”, the Regula IIIa’s appearance may win some fans, especially with its precise engravings and details like its general matte metal finish with bright polished embossed lines that on one side transforming into the King.

What doesn’t age well on these cameras is the viewfinder’s plastic rim that is often found cracked these days, and the printed exposure counter’s numbers that eventually wear off with time. This is obviously a drawback of the camera’s production cost cuttings over time, since early camera examples have an engraved exposure counter. However, close to no cost was saved with the film memo dial on the film rewind knob, which offers click stops – something that is rare even among much more advanced cameras.

Holding the Regula IIIa in your hands, it is relatively comfortable. The camera can be fired with a single hand, but for winding on the film a firm grip using both hands is needed. The film advance lever is well designed and has 180-degree travel. For such an old camera it’s worth mentioning that the film advance mechanism is linked to shutter cocking and that there is double exposure prevention in place. The viewfinder is of a simple reverse Galilean type. No bells and whistles there, however, it’s comfortably (medium) sized.

The optics are what distinguishes this camera from the fully German-made King Regulas. The Ghetaldus Ghenar 45 mm f/3.5 lens, based on a Cooke triplet design, consists of three coated elements. It focuses from 1m to infinity. Surprisingly, there are 10 rounded aperture blades that form a near perfect circle at all settings, from f/3.5 all the way down to f/16. The Prontor leaf shutter offers four timed exposures, from 1/200 down to 1/25s, aswell as B. As is common for leaf shutter mechanisms, the shutter speed is set via a rim on the lens assembly. A nice touch is a flash synchronization socket, while the accessory shoe is “cold” (you’ll need a flash cable), and a self-timer.

Despite the obvious limitation – the absence of a rangefinder, fo starters – the Ghetaldus Regula IIIa is capable of some great results. On a bright sunny day the top shutter speed of 1/200 s forces us to significantly stop down the lens, but the Ghenar proves to be sharp even wide open and is capable of offering some pleasant background separation for portraits. Stopping down the lens puts less pressure on our distance estimations and, naturally, improves sharpness and contrast. With a 45mm focal length, the field of view is a bit wider than what you might be used to from a rangefinder and SLR kit lenses, but among fixed-lens cameras it doesn’t really stand out from the crowd.

I was impressed by the colours and general rendering, however, the colour outcome strongly depends on the film used and the scanning technique; mine is far from being optimised for objective lens comparison. What additionally elevates the negatives is a wiggly pattern at the edges caused by the film chamber shape. It’s very specific and may even be recognised as the camera’s “fingerprint”.

If you treat your Regula IIIa well, there’s not much to go wrong with it. If it gets stuck, it’s simple to service, but when buying make sure the lens is fungus free. I’ve found many infested ones, some beyond saving. One should also be careful when cleaning Ghenar’s front element not to damage the scratch-prone coating – it’s not the worst out there, but also not among the more resistant ones.

Ghetaldus cameras are quite uncommon. They were made solely for the Yugoslav market and rarely pop up for sale outside the former republics of Yugoslavia’s borders. Based on the serial numbers I estimate there were approximately 13,000 Ghetaldus Regulas made (IIIa and its sister model IIb combined). And speaking of serial numbers – if you have any Ghetaldus camera, I’ll be glad to add its serial number to my database!

___
Superb, thank you! On my linked blog you can find my email address. I come from Slovenia and I’m very interested in former Yugoslavia camera production, however, there are not many people among us any more that could share stories.