As an inveterate collector and appreciator of photographic apparatus, but also a less than wealthy one, I’m always on the lookout for gear that is not only nice but also not too hard on my bank balance.

So I love the quality feel and fine engineering of the best German brands like Voigtlander and Zeiss and the L word. But most of the really desirable models are beyond my pocket. I mean I could try harder and scrimp and save, or spend hours trawling the auction site for misdescribed possible bargains … but nah, life’s too short.

So what’s a poor Germanophile to do? Well, one option that became rather obvious to me after a modicum of online research was the not-obviously-German. Whilst I’ve always been aware of Kodak as a brand (who isn’t?), it did take a little background reading to discover that not all Kodaks were built the same, or by the same people.

To wit, when Kodak were looking to expand their presence and premium sales in Europe in the 1930s, rather than invest heavily in either local manufacturing or in domestic American research into making cameras that would appeal to the European market, they simply chose a suitable readymade company to buy to do their high-end design and manufacturing for them.

Enter the company of Dr August Nagel, acquired by Kodak in 1931. Already well known for their high quality folding cameras and miniatures like the Pupille, they were an easy choice for Kodak’s developing market in people’s cameras and the new 35mm ready-loaded cassette format.

The first revolutionary models made by Kodak AG were the higher-end Retinas, designed around the new 135 format, which evolved into a range of renowned rangefinders that rivalled Leica and Voigtlander in quality build and optics. But that’s not what we’re talking about here.

Alongside the Retinas there was obviously space for a “lesser” spec, more consumer-oriented range of cameras, priced more for the everyman photographer (although it should be noted that in present day terms the cost of a new Retinette in the early 60s was still akin to that of a midrange mirrorless or DSLR, so not exactly the cheapie option). So, enter the Retinette.

The range of Retinas and Retinettes built was pretty large, with myriad incremental developments, and this isn’t the space for a listing of all the models, which would constitute the basis of a substantial camera collection just in themselves. So here follows an homage to just one model, the Retinette 1B. Because it’s the one I own and love to use.

Bought for a beer-budget-friendly £25 on eBay from a relatively promising looking listing with half-decent photos but no guarantee of shootable condition, it felt like a chance I could justify taking.

And upon arrival in the post I wasn’t disappointed. Metalwork: check, clean and with a classy brushed chrome finish with pressed-in Retinette 1B script logo. Overall condition: clean and really rather nice-feeling, with a nice smooth-textured but grippy leatherette on the body. Feels quite light, not panzer-tank heavy, but solid and precise.

And then to check the functionality. That first crank of the (bottom-mounted, took a moment to find it) wind lever … Ooh, that’s smooth! First press of the shutter release, with its small chrome button … Ooh, that’s soft and smooth too but also definite with a clearly-signalled release point, and so quiet, just the slightest click from the Prontor LK shutter. First look through the viewfinder … Again, nice. Bright and undistorted, clear white framelines, with a lightmeter needle clearly visible in the bottom part of the viewfinder; black on clear ground with sharply etched under/over/dead-on exposure markings. A lively, reactive lightmeter needle.

A little close inspection reveals that the selenium cell on the front of the camera is subtly back-engraved in gold with a Gossen logo. The lens is engraved with another legendary name, Rodenstock (it’s a Reomar, 45mm f/2.8, a “mere” Cooke triplet design, but more on that later). It can use a push-on lenshood (I had a Kodisk lens hood in my junkshop-buys bits box that fits perfectly) or a 29.5mm threaded hood in the dainty filter thread.

So this one was going to get some film loaded and used pretty quickly. The back opens with a tiny chromed button on the left side of the baseplate near the offset tripod socket. Loading is entirely conventional, just push the leader into slots in the take-up spool and guide film over the sprockets. Then remember to set the counter to 36 on the knob on top right (these cameras use a count-down counter).

First impression upon winding on the first couple of waste frames was, “Wow, it’s still smooth even pulling film through the gate”. And that smoothness continues all the way through the roll. It has the most consistently light and effortless winding action of pretty much any of my cameras, with only the Nikon F3 rivalling it, although that’s more mechanical, chunky and engineered in feel. So, a tactile delight.

Out and about in use, it’s a scale-focus compact, so you’re on your own with guessing distances or using an auxiliary rangefinder if you want to be precise. The focus is calibrated in feet and metres from 3.5′ to infinity, and has convenient clickstops at 6ft (portrait), 10ft (small group), 25ft (larger group and hyperfocal), with some depth-of-field arrows engraved to give an idea of what’ll be in focus at typical middling apertures. So far so good, not unlike an Olympus Trip 35.

Now, how do you set exposure? Well, it has a three-ring dial around the lens. Shutter speed is set by the frontmost heavily knurled ring (1/15 to 1/500 and B), aperture by the rearmost ring (f/2.8 to f/22), with a black plastic knob that feels like it ought to be a focussing handle, but isn’t. And the in-between ring is accessed by a fingernail press of a chromed button that allows you to set the film speed (ASA 10-800).

Once film speed is set, the aperture and shutterspeed rings will both control the position of the meter needle in the viewfinder, so you can preset either a preferred aperture or shutter speed and then adjust the other until the meter reads dead centre.

Lovely and simple; it does require a wee bit of thought before use, to determine which of the preset values will allow you some wiggle room with the variable parameter with changing light conditions but it becomes second nature very quickly and you will learn to trust the lightmeter, it is very accurate for the kind of general photography the camera was intended for.

Upon finishing the roll, another chromed button nestled inside the crook of the wind lever releases the sprockets and you use the knurled rewind knob at top left (which also has a typical of the time, rudimentary film-type reminder indicator) to rewind the film, as smoothly as it wound on. And that’s it, one roll down.

Results? Well, judging again by the standards of typical use of a camera of this sort, they are very good indeed. Assuming you can make a decent fist of scale-focussing, the lens (which is coated with a pale purple bloom) is very sharp all over the negative at the typical middling f5.6-16 apertures you’d use in standard British outdoor conditions at ISO 100 or 200. 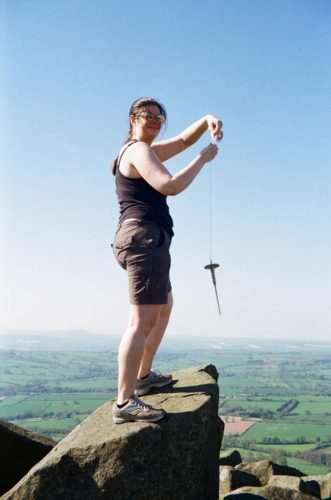 I’ve only ever shot with a lenshood and no filters, and find the contrast very pleasing and no visible flare spots. In all honesty it isn’t a camera you’d test to the very extremes of wide-open sharpness and it’d be unfair to do that and then find it wanting compared to an SLR with £2,000 worth of lens hanging off the front.

But used as intended it produces beautiful photos that are well exposed and sharp, and maybe equally importantly, feels fun and intuitive to use. It fulfils what I’m sure was its design brief, to be a simple to use, carry-along camera that would give great quality photos for the enthusiast owner.

I do also own and use a Trip 35 and find the ethos of both cameras similar, but still tend to reach for the Retinette for its greater range of manual control should it be needed, and for its lovely tactile feel that’s a reminder of just how beautifully fine machines used to be manufactured when they were built up to a specification and not down to a price, even if the typical secondhand price of this model is piffling and no reflection of its true worth. Thoroughly recommended!

Great review, and looks like a great shooter. Another comparable camera is the Zeiss Ikon Symbolica (zone focus) or the Contina. Love the quality and build of these 1950s German Cameras.

Great review for such a cute little camera!

I have one of these I used just in the last month or so, for the first time in a while. Fun camera. It is made the way German cars were, before they had to compete with the Japanese. the meter on mine is off a stop or so. Something to look at for anyone considering a camera with a selenium cell meter.