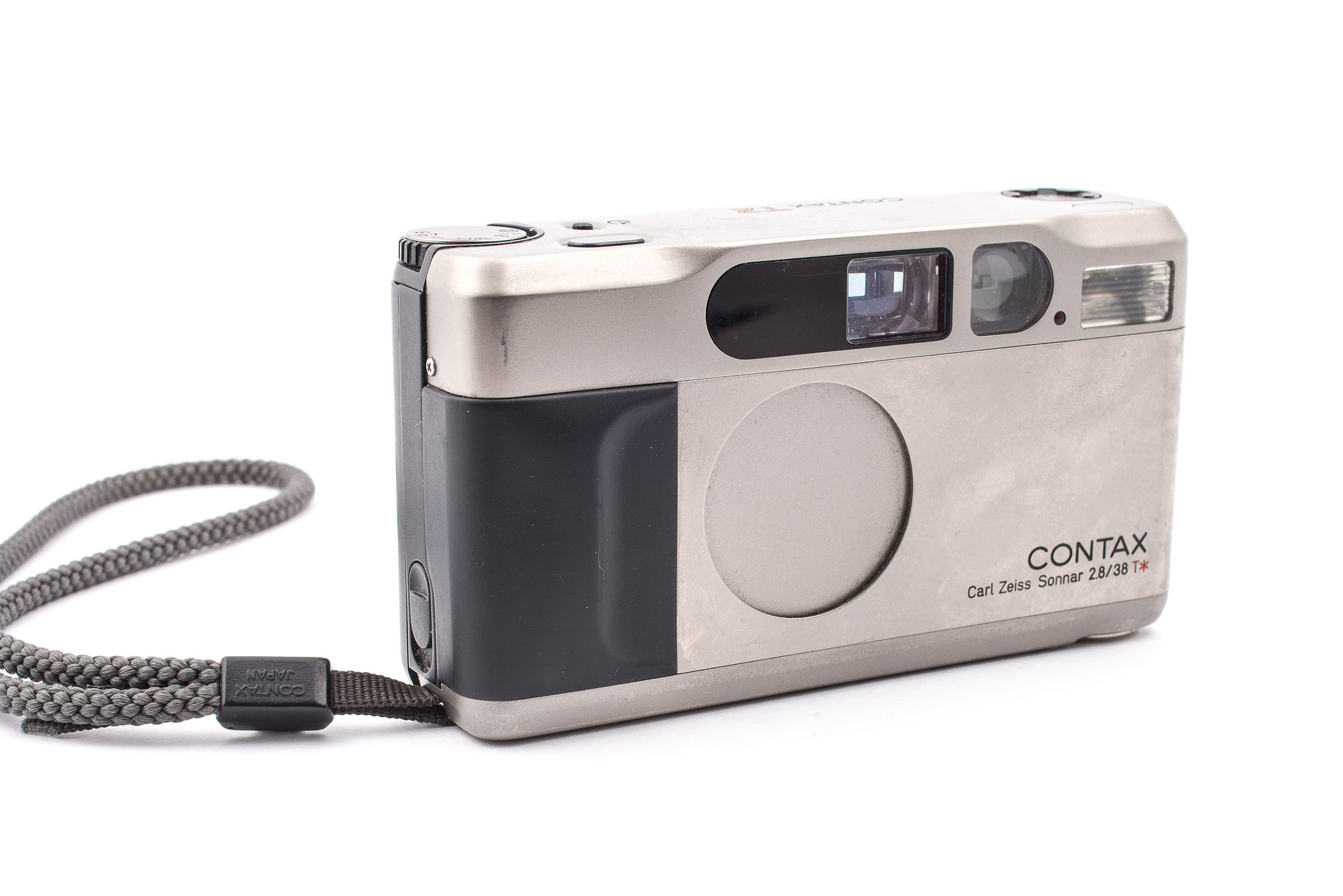 You could, if you want to, blame it  on the Kardashians.

In recent appearances (such as her interview on Jimmy Fallon’s show) the budding magazine photographer has been quick to extol the virtues of her favourite film camera – the Contax T2.

Why have Jenner and Hemsworth flipped for this compact film camera? Well, it seems to be part of a wider trend.

The T2 is one of a clutch of highly regarded, highly sought-after compact cameras – premium compacts. In the 1990s, there was a clutch of models aimed at serious photographers who didn’t want to schlep an SLR outfit everywhere they went.

The Contax T, T2 and T3s were joined by the Minolta TC1, the retro-styled Nikon 35Ti and 28Ti and Yashica’s revered T4 and T5. Somewhat further down the price scale was Olympus’s Mju range, sporting tack-sharp lenses in a pocket-sized body.

These cameras spotted varying degrees of sophistication but all of them were auto-focus. They were capable of taking properly exposed images 99% of the time.

Twenty years later, the allure of these high-end compacts has done anything but fade. In fact, it has become feverish.

That Contax T2 is no slouch. The Contax name is synonymous with great optics (thanks to Carl Zeiss) and it is wrapped in a durable metal shell. No cheap plastic covering here; this was always a camera that commanded a premium price. (Note: these cameras were made in Japan after the Contax name was bought by Kyocera).

Since Jenner’s Contax conversion, the price of these cameras has soared. Earlier this year, Japan Camera Hunter’s Bellamy Hunt told The Lily: “Because of their popularity in the past year or two, prices have tripled, quadrupled, particularly for the Contax T2. When she got seen with that camera, it just went mental.”

On a recent episode of the Film Photography Podcast’s guest Matt Marrash, who works in camera retail in Columbus, Ohio, talked about what cameras were proving popular with younger photographers who are new to film. “Kids I’ve never even seen before coming in and asking about these Contax point-and-shoot cameras, you know these T2s and T3s… It shows up on the Instagram, and a million other people later say ‘I want to do this.'”

But he had a warning for them. “Once the electronics go in that thing, you have a brick… Most of the people repairing them that aren’t authorised repair places are just harvesting parts of other cameras, so it’s two-for–one. They’re making it even more scarce.

“Once that metering system goes, that’s it. You’ve got a brick.”

One of the great pluses of film cameras is that they are (often) short on temperamental electronics. Most cameras had the bare minimum until the early 1980s. Cameras in the 70s had only the most rudimentary – often just that needed for the meter and perhaps shutter times. It left the rest up to you.

The premium compacts, however, came with plenty. In the Contax’s case, it meant an electronic shutter, programme modes and, of course, autofocus – though you can also focus manually if you wish.

The Contax T2 first appeared in 1990. Any Contax T2 still shooting today could be up to 27 years old. Its titanium shell will no doubt be fine, but the electronic brain at the heart of the camera is the likeliest part to fail.

And there are other issues that compound this problem. Kyocera, which made cameras like the T2 and T3 under the Contax badge, exited the film camera game in 2005. Stocks of spare parts are starting to dwindle.

As the price of Contax premium compacts rises, more cameras are being stripped for spare parts, meaning that the pool of spare parts dwindles further.

It’s not just the Contax T2 that’s affected. For years, the price of other compacts further down the food chain have risen aswell. Olympus Mju-IIs, a common auto-focus compact from the 1990s, have become much sought-after. In the UK you’re unlikely to find one for less than £150.

Yashica’s T4 and T5, armed with Carl Zeiss glass in a sleek plastic shell, are rare to find for less than £300. This is partly down to their popularity with millennial film photographers – no self-respecting Vice reader would be seen without one.

A friend who used to work in a London camera stores remembers having a bin with 20 of them at reduced prices in the mid-2000s. “We couldn’t give them away,” he told me. Now that stash could pay for a round-the-World trip, in some comfort.

“This is the problem with compact film cameras now. They are in a bubble as more people want to shoot them, but there are limited cameras,” Bellamy Hunt tells Kosmo Foto. “And the supply is dwindling all the time. I am sure there are some technically talented individuals out there that can do some repairs, but the majority of these cameras are going to be barely useable within the next decade.”

The kind of money that people are now spending on Contax T2s might. Buy you a secondhand Leica and a lens or two, if you’re lucky, the difference being that the Leica doesn’t have a wealth of electronics, spare parts are a lot easier to find, and there are still a decent number of repairers who can work on them.

Hamish Gill, who runs the blog 35mmc, has plenty of experience with the T2 (you can read his review here).

“A lot of these camera never really plummeted in value, but they certainly got a lot lower. I started the blog in 2013 – I bought my tatty T2 that year for £160, then later bought a mint one for £250. I think I sold it for £360 about a year later – though I can’t really remember the dates, I guess that gives some clue.

The lens is great… It’s heavy though, too heavy for my liking – Hamish Gill, 35mmc

Is ‘celebrity sell’ part of the problem? “For sure – the value was already going up. Automatic compact cameras seem to have been the most attractive to the younger new-to-film photographers. Without wanting to cast aspersions, I suppose these are the sorts also most likely to be influenced by celebrity culture…”

Gill says the T2, which he has reviewed on his site, is a quality camera but not, perhaps, the perfect camera its riding value may suggest. “It’s a good camera. Nice viewfinder, it prioritises open apertures over slower shutter speeds which is a preference of mine. The lens is great too. It’s heavy though, too heavy for my liking.”

In five or 10 years time, an awful lot of people who shelled out a small fortune on this very narrow genre of film cameras may be staring at expensive paperweights.

“This is kind of why I decided to start working on a new compact film camera. I just hope I can get it to market before the market explodes,” says Hunt.

But for those not so tied up on the Contax name, there are plenty of other compact film cameras “There are still plenty of budget options out there, it doesn’t all have to be T2’s and T3’s. Yashicas are still reasonable and the earlier Pentax, Nikon and Minolta compact cameras are a blast to use. And search the bargain bins, you never know, you might get lucky.”

I agree with you also as much as I like point and shoot cameras I rather be able to choose the aperture and speed of my shots so a manual camera (or settings) is always high on my list.
I guess a lot of these grendy milenials would be put off if they had to read the light and set the camera accordingly.

[…] say this is a bubble, an overvaluation of cameras that aren’t worth what people are paying. In a few specific cases this opinion is true, but generally speaking, this is incorrect. Film cameras today are not over-valued, they were […]

In 1973 Yashica began a collaboration with Carl Zeiss “who owned the Contax name” to produce pro cameras with the Contax name and a new lens mount using lenses designed by Carl Zeiss. First camera was the Contax RTS. Kyocera took control of Yashica in 1983 and from then they only produced Contax SLRs and lenses. All Yashica branded cameras were made by Cosina.

Thinking about spending a stack of cash on a film camera? Read this first! - 35mmc

Do not buy a Contax G2, T2 or T3! – Darragh Corrigan Photography