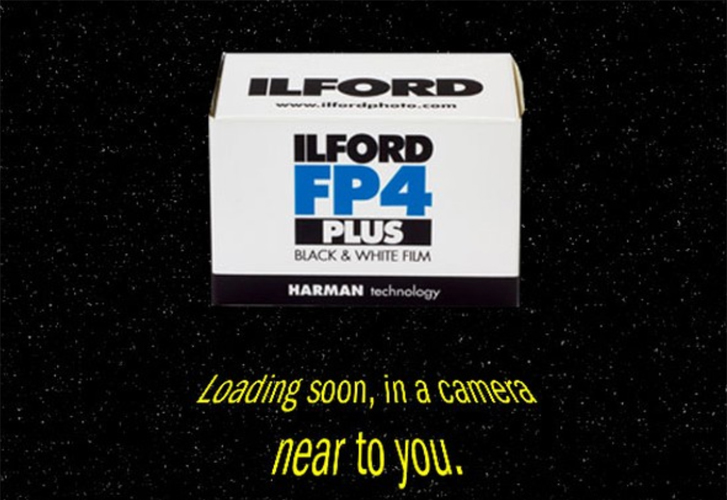 If you hate Star Wars, then today is very much a good day to stay off the internet.

‘May the Fourth Be With You’ has of course become a tentpole of geek culture, spawning all manner of celebration of George Lucas’ famous space operas.

It obviously has its place in film culture aswell, thanks to pub-quiz-winning trivia such as the fact the original lightsabre was made from a flash attachment for a Graflex large format camera which one of the film’s crew found in a junk shop.

Now, black-and-white film producers Ilford Photo have got in on the act. You could call it the “Darkroom Side of the Force”. (Sorry.)

On Monday, Ilford’s Instagram account featured a pastiche of the classic opening text crawl of the Star Wars films, with a roll of Ilford FP4+ in the centre. Beneath it is the text: “Loading soon, in a camera near to you. May the FP4+ be with you.”

Handclaps – and groans – should be forwarded to the llford Photo marketing department.

Fujifilm and Kodak haven’t appeared to have taken part in this film/Star Wars geekery, but Kosmo Foto will go right ahead and lay down a challenge for those hard-working souls in the Eastman Kodak factory for next 4 May: build a lifesize X-Wing fighter out of Tri-X.