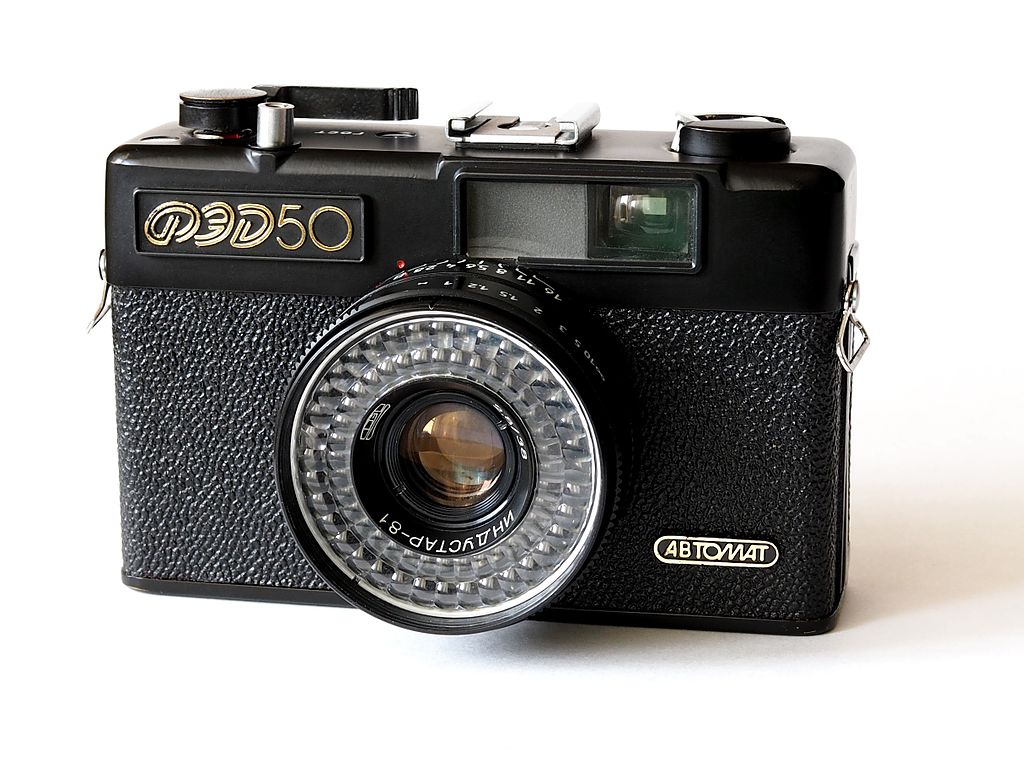 The Olympus Trip 35 is one of the most famous film cameras of all time. It came out in 1967 and production didn’t end until 1984; not bad for a camera that still metered via a selenium cell.

The Trip was designed very much with holidays in mind, hence its name. It had only two shutter speeds – 1/40th and 1/200th – and its automatic exposure system would choose one and match it with the right aperture. It was a pretty simple, no-frills camera, but it had a secret weapon; a truly exceptional lens.

More than 10 million Trips were sold over the 17 years it was produced. Millions upon millions of pictures were taken on them. And like many other Western cameras big and small, the Japan-made Trip inspired another camera from behind the Iron Curtain – the FED 50.

The FED 50 is a heavy, chunky compact, with a fixed 38mm 2.8 lens, and a giant selenium meter cell located around the lens – just like the Trip, and a bunch of other cameras from the 1960s and 70s.

When the FED 50 emerged in 1986, two years after the last Trip 35 rolled off the production lines, its features looked decidedly old hat. Cameras were starting to embrace autofocus lens technology; battery-powered meters were becoming increasingly sophisticated. So the FED, built in Kharkiv in what is now Ukraine, was a throwback. Just like the Trip or the Lomo LC-A focusing was inexact; the FED 50 is a viewfinder camera, with zone-focus-style distance settings. These are represented with handy pictograms in the viewfinder, a simplified stick figure for a portrait, and a landscape (hills and sun) for infinity. Unlike cameras like the Lomo LC-A, the FED doesn’t click between zone settings – these zones are approximate. If you look down on the lens from above, you’ll see distance settings on the lens similar to those on a rangefinder camera.

The FED is more than a Trip copy, however. It’s the end of a line of cameras that began in the 1960s with another Trip-lookalike, the half-frame FED Micron. The Micron was a chrome-and-black zone focus camera based heavily on the Konica Eye of the 1960s. Like many Soviet cameras, the Micron is a little rougher and agricultural, but definitely built to a higher standard than some of the later FEDs, such as the FED 5.

Half-frame cameras were popular when photographers were a little more frugal; they used only half the standard 36mm x 24mm frame – 18mm by 24mm – meaning 72 pictures could be fitted on a 36-shot roll of film, or 48 on a 24-shot roll.

The big drawback with half-frame cameras is that the image was half the size of a normal frame on a 35mm camera – and that meant the negs or slides couldn’t be blown up much before image resolution started to suffer. Also, the price of film began to fall markedly in the 1970s, so photographers felt less need to try and wring as many frames out of a roll of film.

When FED upgraded the Micron into the Micron 2, they replaced its selenium meter with a battery-powered one, turned it from a zone focus camera into a rangefinder, and got rid of the half-frame format. It seems odd that the FED 50 which followed it took a retrograde step and went back to selenium and a kind of zone focus, but then the chiefs in Kharkiv clearly had their reasons. And they help point to what kind of camera the FED 50 was expected to be.

Like the Trip, the FED 50 can be shot manually. You choose the aperture on the lens – but you’ll be limited to shooting only at 1/30th. That’s pretty much useless if you’re out in the baking summer sun (and you’ve got to think that, like the Trip, the FED 50 was expected to be taken out on holidays to seaside getaways like Sochi and Yalta). This was a camera expected to be popped onto the Auto setting. Don’t think, just shoot.

The viewfinder also shows the shooter what speed the camera is using – everything from 1/30th (fast enough to stop camera shake) right up to the rather strange 1/650.

But also like the Trip, the FED 50 has a trick up its sleeve thanks to its lens. The 38/2.8 Industar-81 might have not have been lauded by the likes of David Bailey, but it’s impressively sharp. Unlike the Lomo LC-A, there’s very little vignetting; the FED 50 is not a Lomo clone, even if it does use a similar focusing system. I bought my first FED 50 well over a decade ago, when I would snap up any old Soviet camera I could find. I was blown away by how sharp the lens was. While you can keep wonderfully sharp pics from a Lomo LC-A if your subject is in the right zone of focus, these were in a different league.

I shot a few rolls with it and then gave it to a friend who was driving his motorbike from London to India and didn’t have a proper camera. The FED didn’t survive the trip, dying somewhere in Iran, but he managed to get some decent shots out of it.

I’ve owned two FEDS since, both of which have gone out on the road with me around Europe. The FED 50 wasn’t built in quite the same numbers as the Trip 35, but it’s by no means a rare camera – more than 100,000 were made before production stopped in 1996, well after the end of the USSR.

The FED 50 I currently use was bought earlier in the year off an Italian seller on eBay, costing around £20. My other FED had metered perfectly but its ISO selection wheel was loose – you had to make sure it was on the right setting before taking every shot, which wasn’t ideal.

My first rolls with the FED highlighted what can be a bit of a problem with this camera – and shows why, perhaps, it’s not as well-known as it should be. The FED 50 does have a slight tendency to underexpose, and that certainly came out with slide film; I was lucky that several of the pics were taken in strong enough sunlight. Perhaps the selenium meter needed to be ‘warmed up’ – oddly enough, I’ve shot slide films again and there have been few issues. But it makes sense to shoot the first few times on black and white or colour neg film.

I can’t blame the FED too much for some of the muddy xpro shots you see here – that’s one of the risks of buying old film that’s long past its sell-by date. The lens, too, lacks the heavy-duty coating of more expensive models, so bright patches can appear if you’re shooting into the light. But the FED 50 inhabits the same kind of ground as the Olympus Trip 35 – it’s a camera that fits very much into the Lomography mould of shooting from the hip.

My current FED 50 has spent plenty of time on the road this year, as I’ve taken it on trips to Malta, Provence and Istanbul. That’s given me plenty of time to work out this 80s curio’s strengths and weaknesses.

Pair it with some saturated colour print film (or some fresh film for xpro-ing) and the FED 50 really shines. Lomography 100, the own-brand sunny day film Lomography sells at its stores and online, is perfect, as this film gets great results from minilab scanning. Fresh slide film’s another good choice – the FED’s tendency to slightly underexpose helps boost the colours, even if you’ll find the shadows block up.

A few weeks back I was in Istanbul, helping my friend look for a TLR for street photography; a Turkish photographer we got talking to saw the FED and asked what it was. He then looked at a few of the FED’s pics saved on my phone. “You got them from this? But they’re so sharp!”

Check out more of the FED 50 pics in my Flickr set.

Austerity Photo has a great review of the FED 50 aswell.

And more details about the Kharkiv Trip can be found on Soviet Cams.

So this comment will have nothing to do with the camera.

My dad’s best friend is an artist and for many years directed the art museum at the University of Notre Dame. In the 1980s, he spent time in Dubrovnik and painted. In my home is a small painting from that time — of orange roofs. Now, I’ve never so much as looked up Dubrovnik on a map, Googled it, or read its Wikipedia entry. But before I even read the caption on that photo to know where it was taken, I thought, “Hunh, reminds me of that painting.”

[…] you would like to see the original article, click here Or visit his other sites here: http://www.flickr.com/photos/stephendowling/ […]

[…] but started it’s production 2 years after the trip was discontinued according to this great website. This is not a junk find, I looked for it after reading about it on a website that gave a list of […]