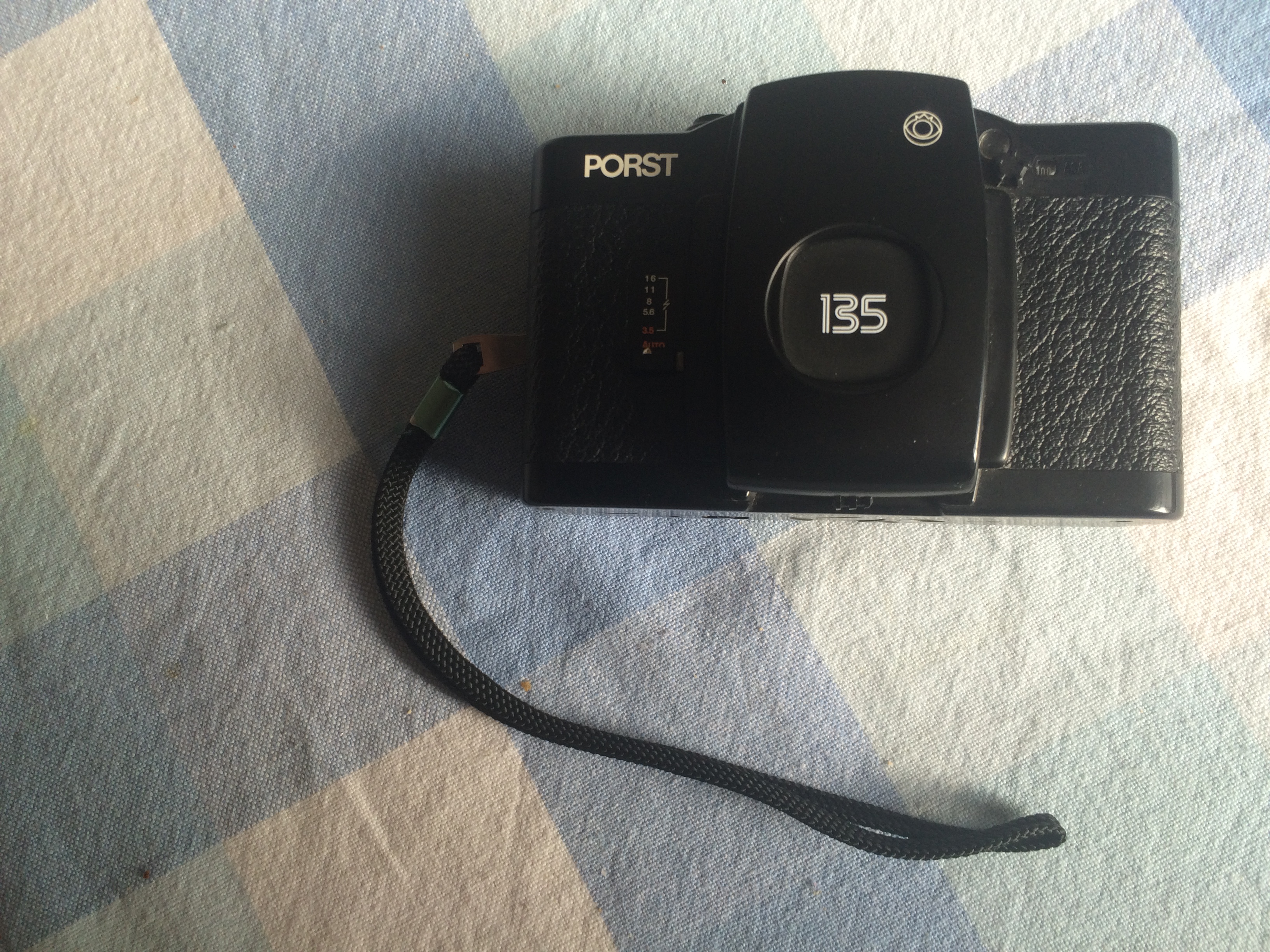 Sometimes it doesn’t pay to be first. The Cosina CX-1 is a Japanese zone-focus camera which was released in 1980. It was small enough to put in your pocket, had an automatic mode for fuss-free shooting, and a sharp, contrasty wide-angle lens.

The CX-1 is a capable little compact camera, but that’s not why it deserves a footnote in photographic history. It’s the fact that it’s the CX-1 that’s responsible for the Soviet LOMO LC-A, the camera that kick-started the LOMOgraphy movement, toy camera photography and – perhaps – sparked the rise of Instagram.

The CX-1, you could argue, doesn’t get the credit it deserves.

The LOMO LC-A started production in 1984, and got its second lease of life after a bunch of Austrian art students found a second-hand model in a Prague junk shop and managed to re-start production in post-Soviet St Petersburg. Technically, the LC-A is a copy of the Cosina CX-2, an improved version of the CX-1 which was cosmetically identical apart from a self-timer on the front.

But without the CX-1, there wouldn’t be the CX-2. As far as LOMOgraphy goes, the CX-1 is pretty much Year Zero.

The original LC-A led to an improved model, the LC-A+ in 2006, the super wide-angle LC-A Wide in 2011, and the medium format LC-A 120 in 2014. That’s quite the family tree for a camera that’s unknown to all but the most committed camera geek.

Put the CX-1 next to the LOMO LC-A and the similarities are easy to see. Both are pocket-sized analogue-era compacts, heaver than you might expect. Zone focus means choosing from a handful of pre-set distances – the CX-1 offers 0.9 metres, 1.5 metres, 3 metres and infinity. The 0.9 setting is a little more than arm’s length, allowing the photographer to get pretty close to their subject.

There’s no lens cap to lose with a CX-1; like the LC-A, there’s a lens cover that slides open. The lens cover also obscures the viewfinder, and the camera’s shutter won’t fire unless the cover is open. On the LC-A though, the cover is opened via a simple sliding lever on the bottom of the lens housing. The CX-1’s is much more interesting; to open it, you have to rotate the entire front of the camera clockwise, which stops with a satisfying click. Recreating this reliably and cheaply might have been a little too much to ask in the Soviet planned economy.

I bought a Soviet-era LOMO LC-A back in 2000; it’s soldiered pretty much reliably over the last 15 years, aside from the frame counter packing up. Mind you, that’s a second-hand camera that I’ve put at least a hundred rolls of film through and which has travelled with me on the Trans-Siberian, many European city breaks, trips to Istanbul and New Zealand. The LC-A might not be sophisticated, but it is pretty robust. Learning more and more about the LOMO LC-A made me curious to try out the Cosinas which it was copied off. CX-2s have become cult cameras in their own right – prices for them climbed as the LOMOgraphy craze kicked off. CX-1s are a little cheaper, but not by much. 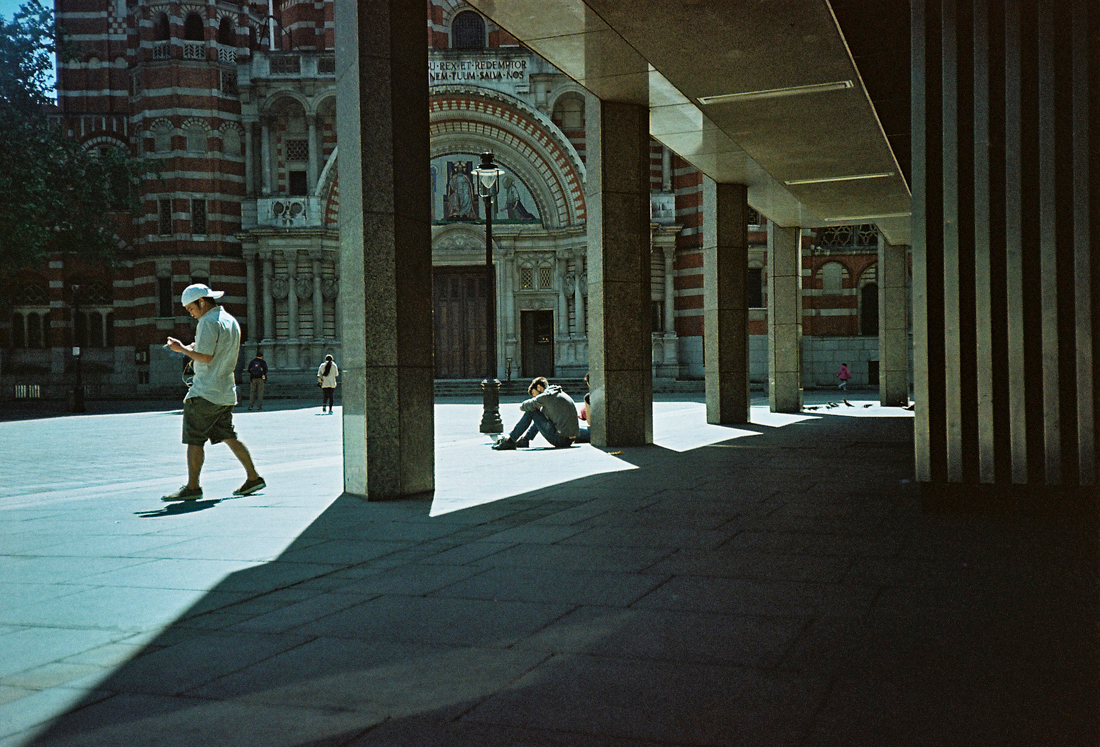 Not all CX-1s, however, wear the Cosina badge. A lot of manufacturers produced cameras under differing names – either the livery of another camera producer or sometimes retailers. That’s why Pentax cameras in the US often came under the Honeywell badge, or old Soviet Zenits sometimes wore a Dixons badge in the UK.

In Europe, some CX-1s were sold under the East German Praktica brand, and others under the name Porst, a West German photographic distributor and retailer. It’s one of these re-badged Porst models (Porst 135 C Auto) that I found on eBay. The camera was in pretty much pristine shape, and in full working order. For much of this year, I’ve been shooting on this rebadged CX-1 as much as I can. 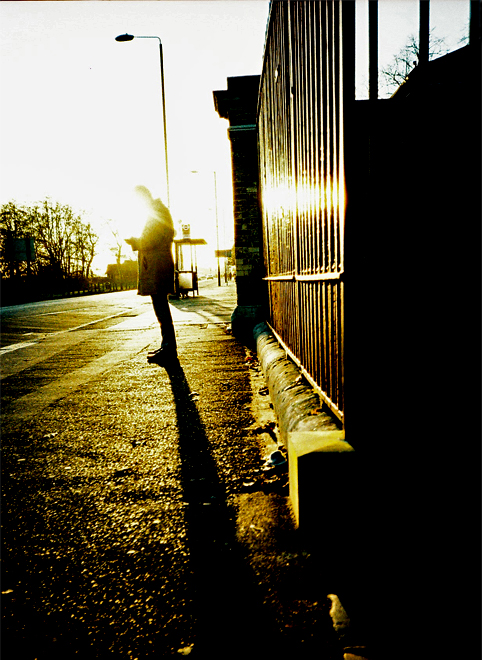 The CX-1 is a tiny bit smaller than the LC-A, but of a similar weight – there’s a fair bit of metal on the chassis, so it has reassuring weight. The camera controls run along the side of the swivelling lens housing. Looking front on, the camera’s aperture controls are on the left hand side. The camera comes with an auto setting – the CX-1 automatically chooses both the aperture and the shutter speed needed to correctly expose. This can lead to some fantastic long exposure light trails, just like the LOMO.

The CX-1 comes with a hot shoe and, originally, a dedicated flash. As the aperture pictogram show you, the camera recommends only using the manual aperture settings with the flash. The rest of the time you should be shooting on the Auto setting.

On the right hand side, just up by the viewfinder window, is the ISO setting. This is the standard Western ISO, and not the Soviet GOST formulation you find on Soviet-era LOMOs. The CX-1 has an ISO range of 25 to 400, wide enough to make it perfect for sunny beach holidays to late-night parties. It even has an ISO 64 setting – making it perfect for using pro-level slide films such as Fuji Tungsten and the legendary Kodachrome 64.

The Cosinon 33/3.5 lens is sharp and adds plenty of contrast and saturation – like the LOMO, it’s especially good with 100 speed print film, or xpro slide films like the original Agfa Precisa or Kodak Elite Chrome 100. There’s nowhere near the same ‘tunnel-vision’ style vignetting like you find on the LOMO, just a touch right on the edges. That lends the pics slightly less drama than you might find on the LOMO, but a lot of photographers will no doubt prefer it.

Loading the camera is simplicity itself; the film take-up spool is easy to align and the camera winds on clearly; it definitely feels a lot smoother than the LC-A.

The Cosinon lens picks up the rich tones of autumn/winter light really well. I especially love the pic above of the man looking at his phone at the bus stop. The flare’s intense but the lens handles it really well. The Cosinon lens is a three-group, four-element glass lens, not a plastic lens that you find on a Diana or a Holga. 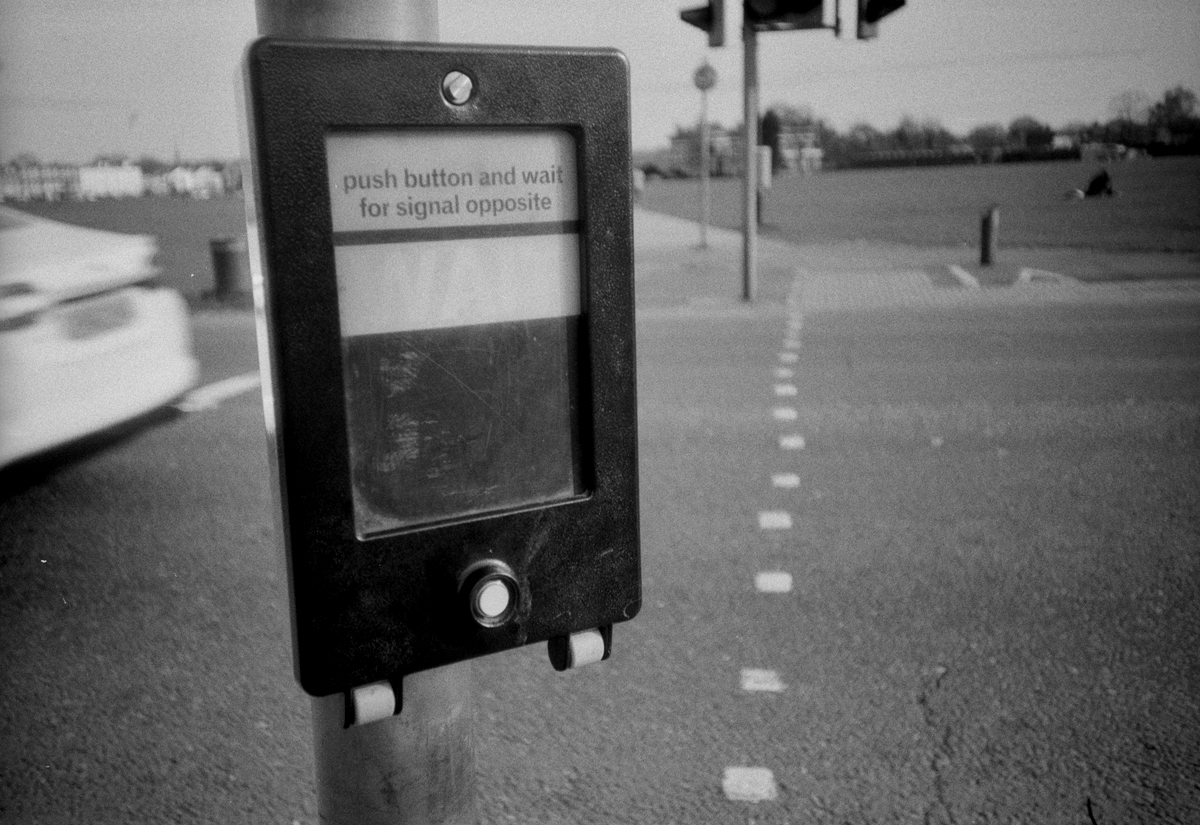 The CX-1 has been a great travel camera too; shooting the world through a LOMO-style eye can be really liberating, especially using expired or cross-processed films. On a recent trip to Malta I decided not to bring any SLRs, but instead do my 35mm shooting on rangefinders and my Porst 135; I ended up shooting at least half-a-dozen rolls. 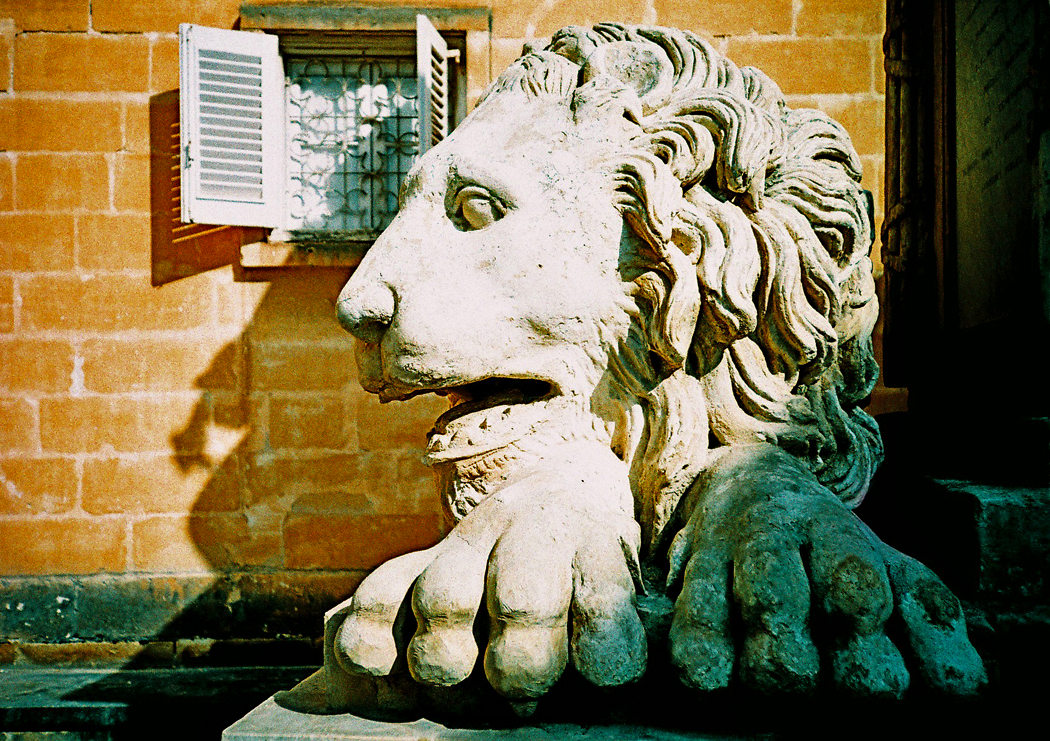 Zone focus cameras take a little getting used to. But the CX-1 show that they’re anything but unsophisticated tools. In a league dominated by the likes of the LOMO LC-A and Olympus’s well-regarded Trip 35, the CX-1 is an under-rated camera. After all, how many cameras can claim to have been the godfather of the 21st Century’s most enduring analogue craze?

See more pics from the Cosina CX-1 on my Flickr set. 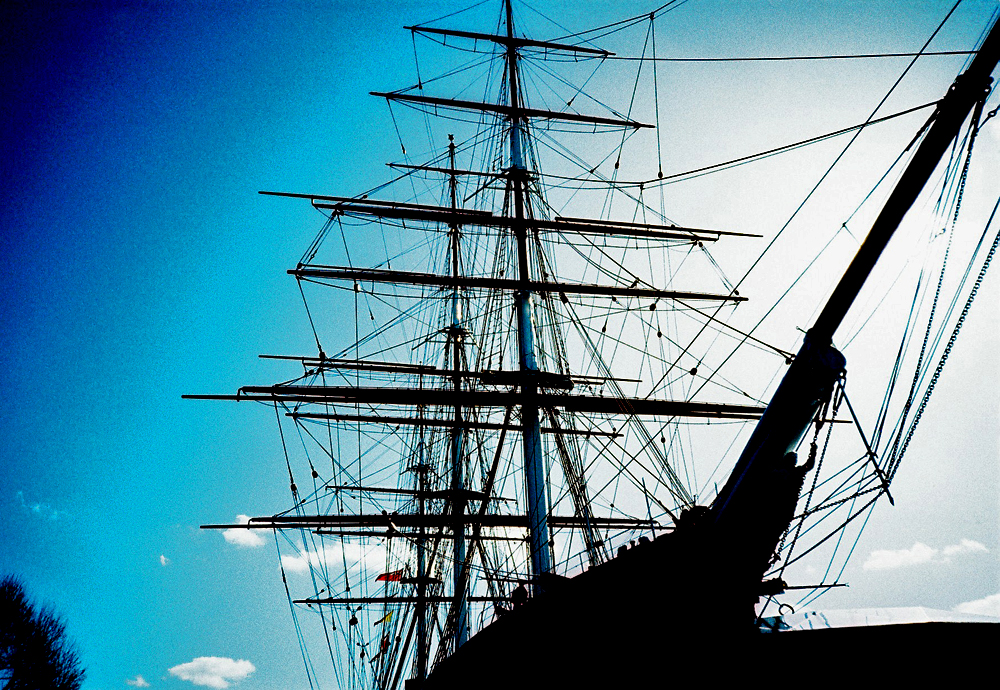 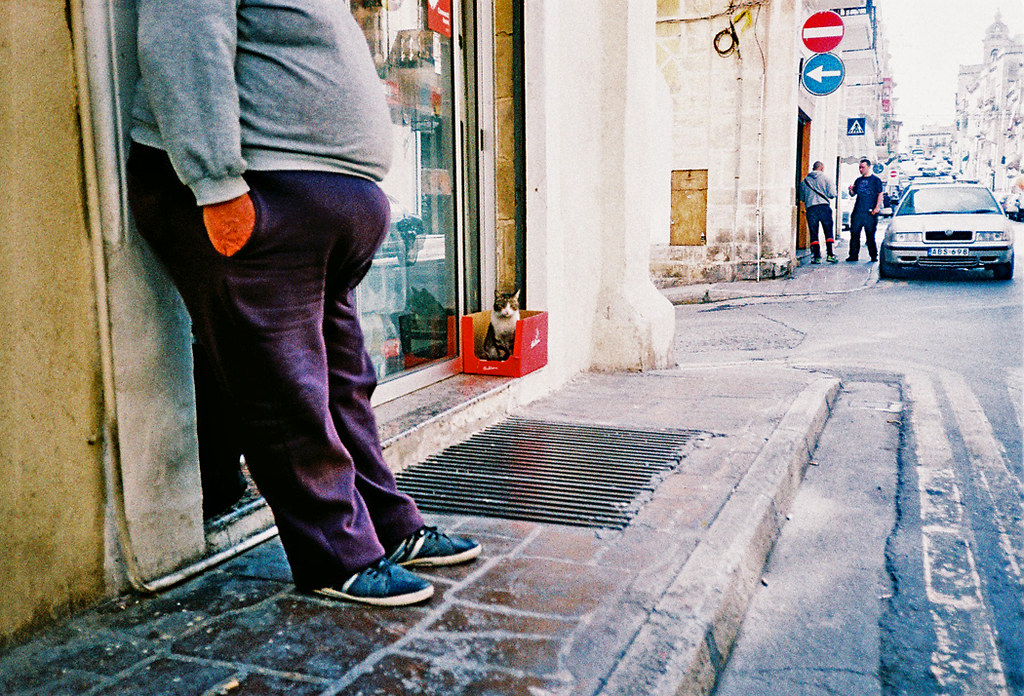 Thanks very much – glad you enjoyed it.

I’m generally not a big lomo fan, but these are nice images, full of great color and tone.

Thanks Jim – LOMOs are a great tool, they certainly inspired my photography to take new directions. The CX-1 and the CX-2 cameras are great to try if you ever see one for a nice price on your travels.

Nice review as always, but you should note the CX-1 has a 35mm f3.5 4-element lens, while the CX-2 has a 5-element 35mm f2.8 lens (check out the manual at butkus.org). I recently shot a roll of T-Max 400 with my Praktica version of the CX-1 and I was very happy with it, save for the rather noisy shutter release. Another minor setback is that even though you get a fixed shutter speed (1/60) and some aperture control in case the meter dies killing the autoexposure mode, that speed is still battery-dependent, unlike that of the Trip 35. The lens… Read more »

Thanks Christos – I did mean to type 3.5 – thanks for spotting.

I really liek teh CX-1,a nd I’ve managed to grab a CX-2 as well, so will be putting that through its paces over the next few months.

Great writing. I have acquired my CX2 just yesterday by a seller in France for just €5. It was supposed to be a non working one with a sticky shutter, but it proved to be just a sticky shutter button not popping back after pressed.
It will take a while to finish that expired Agfa XRG 100 in it and I cannot wait to see how that Cosinon lens performs. I hope it all comes out well just like yours.

I have one of those as well, just took it on a trip to Iceland. They are nice little cameras and I was also lucky with my Porst. I got it for 15 or 20 EUR, not 200+ that you’d need to shell out for a LOMO.

I’ve just ordered a CX-2 after being given a 1988 LOMO by my dad and really liking how capable it is in low light. Nice write-up! Glad to see a few places I recognise in my hometown of South East London too!