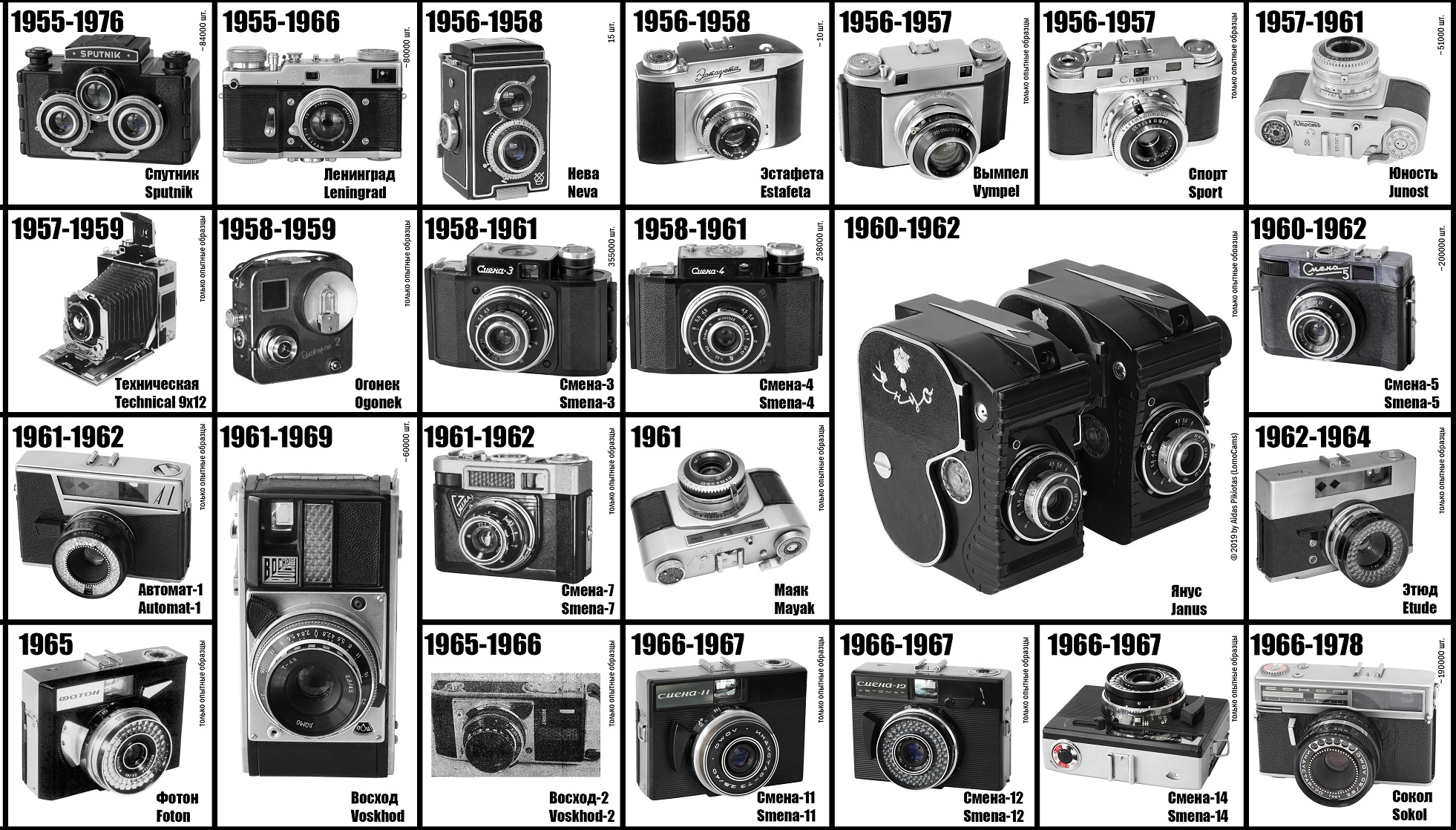 To many photographers, the Soviet camera maker LOMO was synonymous with one camera – the humble, LOMOgraphy-spawning LC-A compact.

But this is only the tip of the iceberg.

Aidas Pikiotas, the man behind the reference site Sovietcams.com, has just released a poster which shows every camera produced by LOMO (Leningradskoye Optiko-Mekhanicheskoye Obyedinenie or Leningrad Optical Mechanical Association) during some seven decades of camera making.

The poster is the culmination of some two decades researching the St Petersburg company, which continues to make medical and optical equipment to this day.

The poster includes images of such curios as the Sport – one of the first 35mm SLRs made back in the 1930s – through to the stylish Voskhod viewfinder camera, the spring-loaded Leningrad rangefinder and the Akvakon-2 underwater camera.

The poster includes photos of many of the cameras from LOMO’s archive or collectors across the world.

“The main reason to create such a poster was a big quantity of mistakes and inaccuracies in my book – I have used unconfirmed information quite often and the specialists in LOMO plant were very old already.

While this is one of the most comprehensive research projects ever made on LOMO, Pikiotas tells Kosmo Foto some of the cameras pictured remain a mystery.

“Unfortunately we know nothing about few very interesting cameras from my poster, including the Foto-GOZ – the very first Soviet camera ever made and the first Soviet camera using 24×36 film. We know nothing about the recent location of the kids’ camera from 1929, the Kvadrat camera, the 6×6 camera Komsomolets-2, the Technical 9×12 and few more very interesting cameras as well.

Researching the long and fascinating history of Soviet camera design is difficult, given the USSR’s collapse and the fact so many prototype cameras found their way into private collections. “It is an extremely difficult to find any reliable information indeed,” says Pikiotas. “The situation has changed a little bit in 2012, then the doors of LOMO plant archives were open widely to me. But these archives still are far away from being perfect sources for camera history researches, unfortunately.”

At least one camera Pikiotas definitely knows exists – the Smena-15 compact camera from the late 1960s – doesn’t feature on the poster because no photograph of it can be found, not even from LOMO’s own archive.

Does Pikiotas plan another book on LOMO? Rather enigmatically, he replies:  “I have an actual draft-copy of my revised book ‘Epoch of LOMO: Cameras and People’ in my hands. But my answer is no, I’m not planning the new book in the near future…”

And does he personally have any favourites from LOMO’s long history? “I have never thought about this, you can trust me,” he says, but the adds: “But I could call the Leningrad, Voskhod and Selena cameras as my favourite ones.”