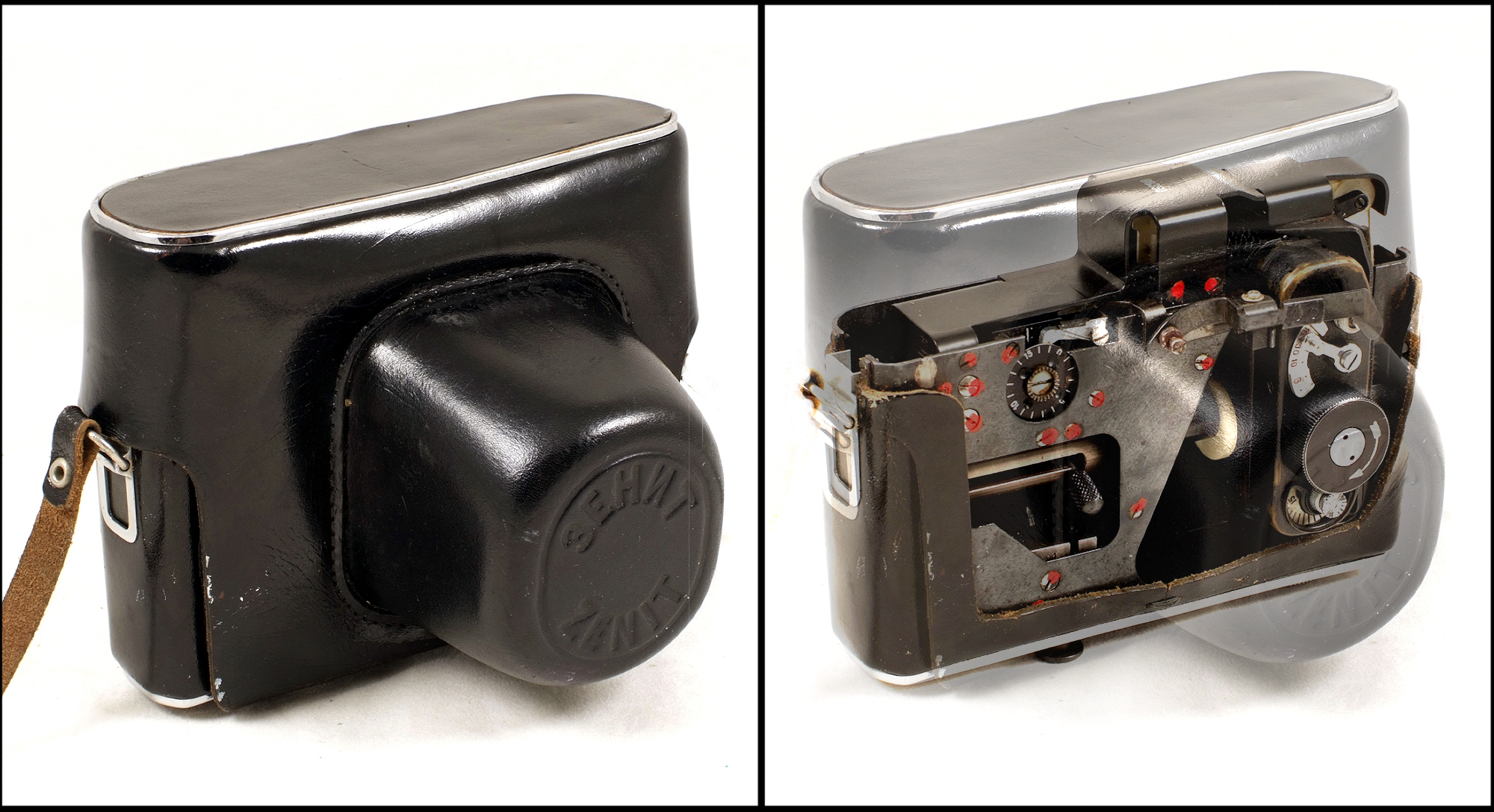 In July 2018, a Soviet Zenit-E camera case went under the hammer at an auction by Aston’s Auctioneers in the English town of Dudley, in the West Midlands.

The Zenit-E was probably the most-produced SLR of all time – some eight-odd million churned out of factories in Moscow and in Minsk – and is more likely to be found in a flea market or car boot sale than in an auction house. Go to a camera fair and these cameras and their characteristically cumbersome leather cases can usually be had for pocket change.

No ordinary case, this. Hidden inside was a Soviet F-21 Ajax-12 spy camera, one that takes half-frame images on 21mm film, its lens pointing through a specially made hole in the left-hand side of the case underneath the strap, 90 degrees from the front of the camera case. The case was an elaborate cover that allowed agents – no doubt dressed as Zenit-toting tourists – to take surreptitious pictures without being noticed, . The hidden camera could be wound so it could take several pictures in quick succession, and then placed inside the case. Then all the user had to do was click a button on the underside of the case and the hole in the side of the case would open, with the camera quietly and quickly clicking a shot at the same time.

The ‘spy Zenit’ received acres of press – on BBC News and other outlets across the world – but on the day of the sale was somewhat overshadowed by another Soviet spy camera made to look like a packet of cigarettes; it fetched £29,000, the highest amount of anything ever sold at the auction house.

The “KGB case” was one of the few examples of this ingenious modification seen in the West. Vladislav Kern, the Chicago-based Soviet camera collector who runs the reference website USSRPhoto.com, told Kosmo Foto he has only ever seen one example in the flesh – at the KGB Espionage Museum in New York. The case camera is in its collection of Soviet spy cameras, as modelled by the KGB’s much-feared agents. The camera that Aston’s got hold of was indeed something of a Cold War secret. But the collector had so many cameras that it took some time for the auction house to actually find it, Aston’s camera consultant Tim Goldsmith tells Kosmo Foto.

“We had the whole collection in the auction warehouse and it amounted to well over 50 VERY large boxes full of cameras. There was so much equipment that we had to run the collection over three auctions. Boxes arrived to us marked up and cross referenced with his database but it wasn’t possible to get everything out in one go,” he says. “There was a box marked ‘Spy Cameras’ and this camera was inside. It wasn’t unusual to find one or two cameras of a totally different type to the others in a box as they were fitted in as and where space allowed.

“When I first saw it, I just assumed it was a normal camera and it must have sat on a shelf for a week or two before I actually opened it up. Then I was surprised!”

Had you heard about the camera before, or seen one? “There is a similar, simpler camera shown in one of the Russian collectors’ books and a year or so ago a book on KGB camera featured another example of this camera, but at the time I hadn’t seen or heard of one.”

There were stories at the time that Goldsmith was so perplexed by the camera that he had rung the camera’s manufacturer, KMZ in Moscow, to work out how it functioned. Not so, he says. “The story went viral and I was interviewed by everyone from the local paper to Bloomberg in the USA and a filmed a piece for Russian TV! The story changed as it was rewritten. I actually had to phone the collector to ask him how it worked as I didn’t want to do anything that might cause the complicated internal mechanism to jam. He explained the operation – there is a tiny button on the bottom of the camera that you can only just feel when it is in the case. Once you know it is there it is fairly obvious, but better safe than sorry.”

You must have given it a try to see if it worked… “Yes, and the first time I tried it, it really raised smile. It works perfectly and with very little noise.”

The collector of this vast array of cameras had travelled widely in Eastern Europe and the USSR in the 1970s thanks to his business. “He had always been interested in cameras and picked up a few at markets etc. After a while people got to know he would buy ‘old cameras’ and on each visit there were cameras waiting for him. After he had collected all the common models he asked his contacts to look out for anything unusual.”

Goldsmith says he was pleasantly surprised at the price the camera achieved – but its sale was also tinged with a. little regret. “I really wanted it for my own collection. Before the sale I did give a talk showing this and a couple of the other cameras in the collection to the PCCGB (Photographic Collector’s Club of Great Britain) and all were totally amazed.”