Many of those who love objects from the past have the same daydream: that they stumble across some long-lost treasure trove that has lain undisturbed for years or decades, waiting patiently to be discovered.

Travelling in the Baltic States in 2001 I found secondhand stores in the Lithuanian city of Kaunas with shelves groaning with old Soviet cameras, most of them in fantastic condition – not just run-of-the-mill Zenits and FEDS but Horizont panoramic cameras and Kiev-10s and 15s aswell. On a month-long Trans-Siberian journey across Russia a few years later, I found a photo shop in the city of Yekaterinburg that had a camera museum attached. Some of the cameras there were prototypes, completely unknown to the West.

Such was the industrial scale of Soviet production, and so labyrinthine was the central planning system, that many products were built in enormous amounts, and sometimes more than the market needed. The Soviets hated throwing things away, so excess quantities were often stored in case they were needed in later times. That applied as much for cameras as it did for steam locomotives or old tanks.

Andrey Khludeyev is a photographer from Almaty, the largest city in Kazakhstan, a vast central Asian country which was part of the Soviet Union until the early 1990s. Here’s his story about a recent find by a friend of his.

“One day I met a friend of mine, Chingiz, a man who often finds old cameras in flea markets and resells them to others interested in film and vintage photography.

“Here, in Kazakhstan we have some choice of old cameras, mostly Soviet ones. Sometimes Chingiz can find pretty rare examples, such as Zakhod F21 KGB camera. But this time he gave me another gift. It was an ordinary Smena 8M, but a brand-new one, in an unopened box. ‘Great,’ I said, ‘Where did you find one in that condition?’ ‘Well,’ he replied, ‘I have many of them.’ ‘How many?’ I asked. ‘A lot!’ was his reply. And Chingiz then told me a story. 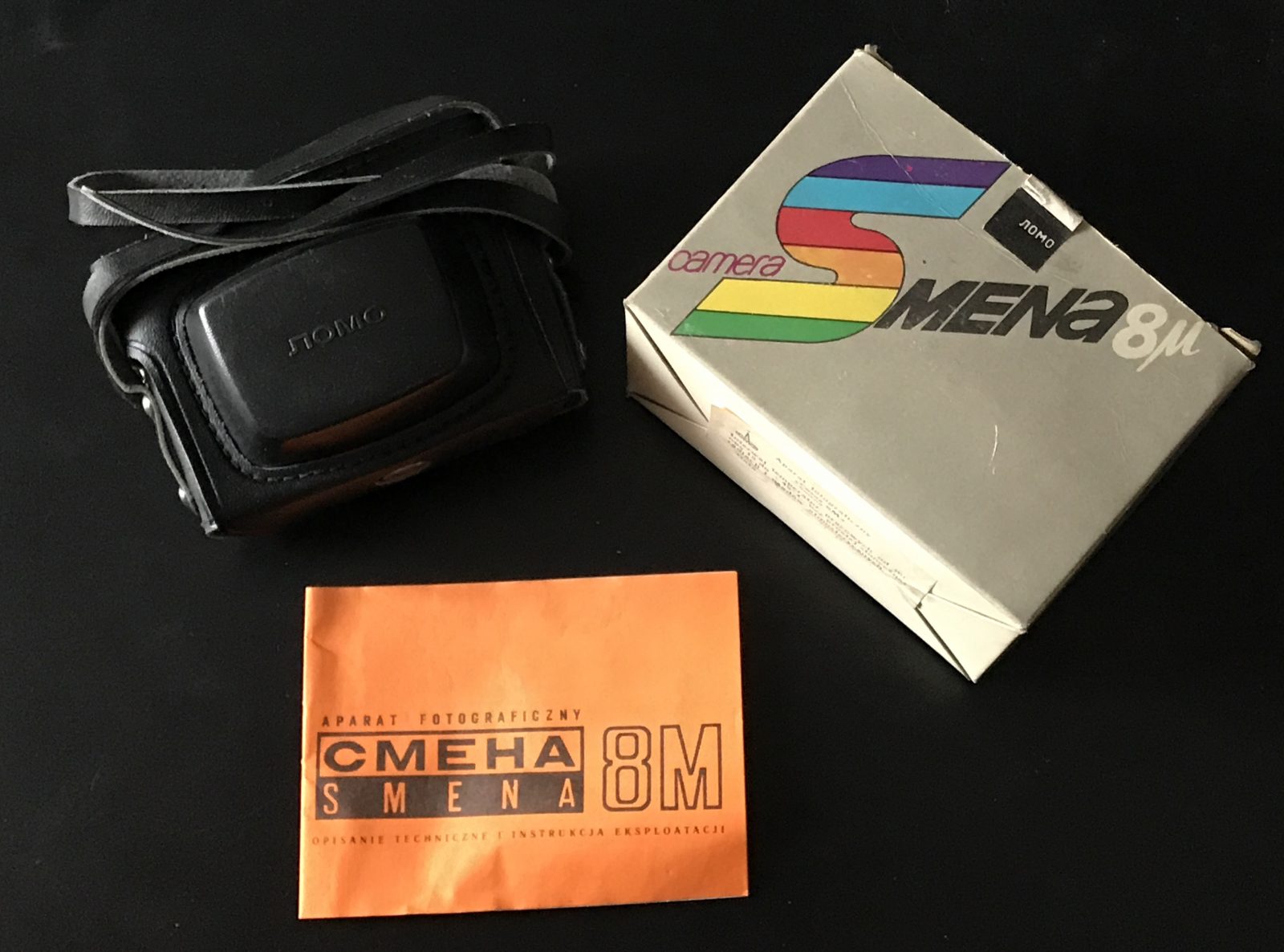 “One day, he was looking in a local internet flea market and found one seller who sold a new Smena 8M. Chingiz connected with him and the seller said that he can sell more than one camera. Much more. It turned out he was not talking about tens or dozens of cameras, but hundreds.

“The seller was in Taldykorgan, small city near Almaty, and he didn’t have access to a big market to sell to, but he seemed to have access to some kind of mystery Soviet-era storehouse, with a huge amount of cameras. It’s hard to say what exactly kind of storehouse it was and how the cameras came to be there, but probably it wasn’t a military one (we know how military love to keep amounts of old stuff for years just in case, but I don’t think the Smenas would have helped to win a war). 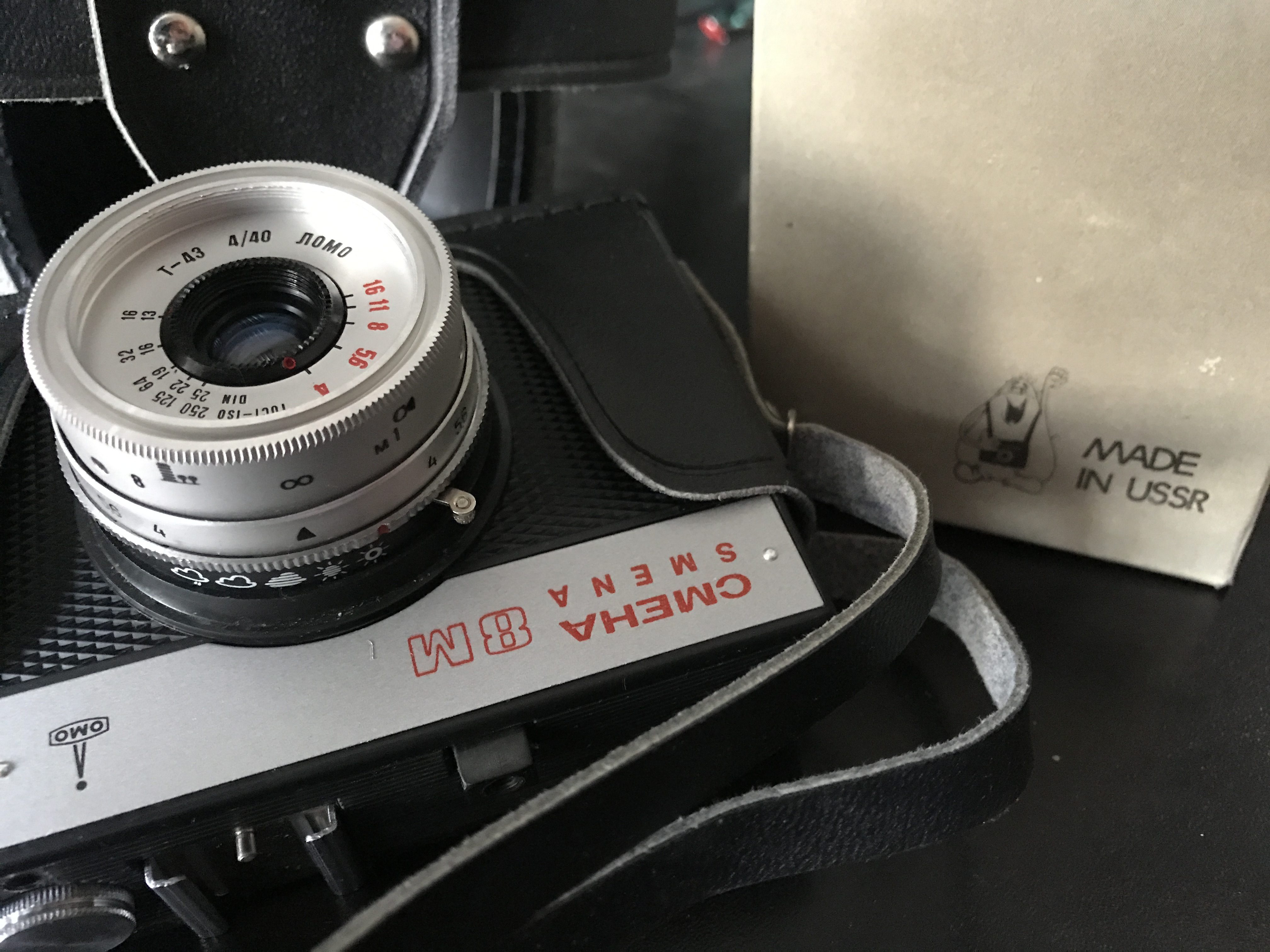 “Possibly, we thought, they were put there in the 90s when the whole system started to collapse here, and the seller managed somehow to get these cameras. It would have cost nothing at that time as most people would have started using Kodak point-and-shoot cameras and Kodak labs. The Soviet cameras became outdated and many people just threw them in the trash. These cameras were lucky not to have been destroyed then and waited quietly in their dark warehouse for almost 30 years.

“So my friend took a hundred cameras first and brought them to Almaty. It turned out that they were brand new indeed, never unpacked and stored in wooden crates and packed in a cellophane. Their condition was truly great and all the cameras were fully functional. Chingiz sold this quantity pretty fast and got some profit, of course.

“He called the seller again and asked if he had some more. He had, but the price this time was twice as much per camera, but still pretty good. This time a seller was ready to sell 500 cameras! Still from the same production lot. And this was a lot even for Almaty. So Chingiz wholesaled the whole amount to Moscow. I was lucky to get two more of them from him.

“I got my gift and I never had such a new Smena before. When I unpacked it, the whole package became even more interesting, as these cameras had been produced for the Polish market. The user manual was only in the Polish language. The cameras were produced in 1990 – the very end of the Soviet era and only the Soviet planning economy system knows how they made their way to Kazakhstan.

“I must say that it’s really exiting to open a box with a camera that waited for you to use it for so long. I took my camera and shoot a roll of Svema, a Soviet-era film that expired about the same year the camera had been produced. The camera worked perfectly, without any flaws and photos from this roll went to my book ‘Expired’, where I shoot my city sites on old Soviet cameras and expired films. In fact, this Smena helped start this project.

“So, 600 new cameras from the Soviet past, sitting waiting to be discovered today. It sounds quite amazing. Is it common situation here in post-Soviet republics? Well, it’s not common, but still possible. We had such bedlam in the economy in the 1990s so who knows?

“As Chingiz told me, he says he still finds a dozen of boxes of new Zenits in a flea market, or five Jupiter-11 lenses in Kiev-Automat mount. Maybe he will find thousands of never-used Zorkis tomorrow? I hope so!”

[…] [a] small city near Almaty, and he didn’t have access to a big market to sell to,” Andrey told Kosmo Foto, “but he seemed to have access to some kind of mystery Soviet-era storehouse, with a huge amount […]

[…] stash of hundreds of Soviet cameras found in a Kazakh […]

Now I know what Ali Baba felt like when he said “open sesame”! Are any of these for sale?

They have all been sold, apparently.

What is interesting is that manual is not in Russian or Kazakh language, but in Polish so it’s a riddle how they ended in former USSR republic. Of course LOMO itself was (still is?) Russian company. You can also see date of production: 1990. Still have one like those -it was my first camera 🙂

They simply were destined for polish market and never delivered. I basically grew up with one of those. GDRs Praktica was out of my reach back then.