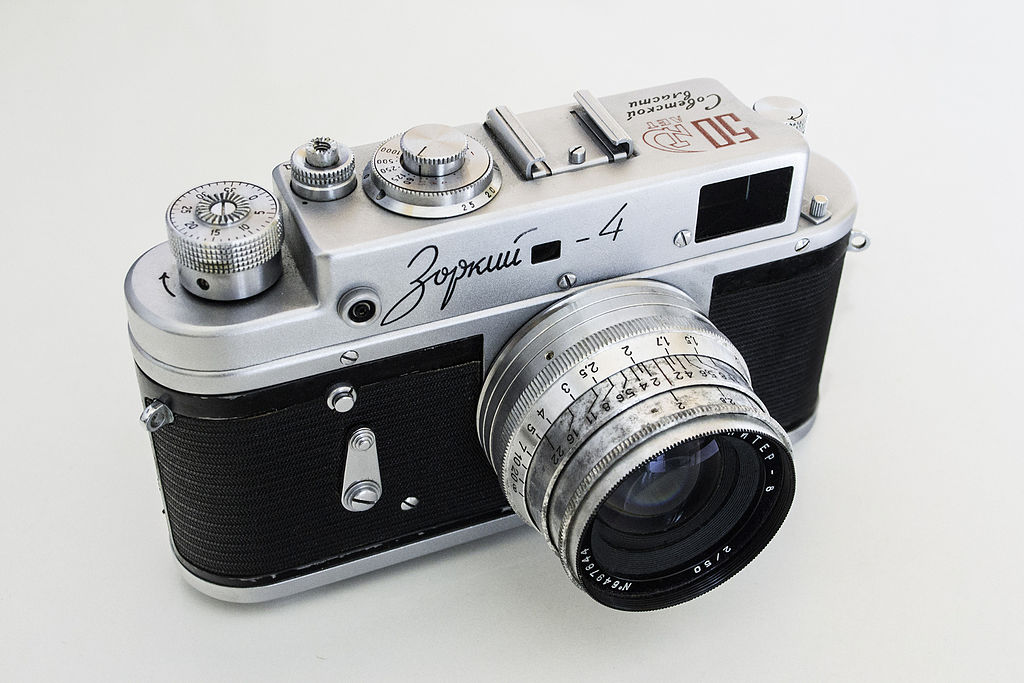 The Military History Museum of the Far Eastern Military District fills a handsome, Tsarist-era building in the centre of the Russian city of Khabarovsk in the Russian Far East.

Khabarovsk is a city on the banks of the Amur River in far-eastern Siberia; half-a-day’s train ride from the Pacific port of Vladivostok. From Moscow, it is nearly 8,500km (5,281 miles) by train – seven time zones’ difference.

Khabarovsk sits only a few miles away from a stretch of Russia’s vast border with China. The museum recounts many Russian military exploits from this remote area – the Russian Civil War clashes amongst the immense forests of the taiga; the Soviet invasion of Japanese-occupied Manchuria during the dying days of World War II – but it also recounts some of the Soviet Union’s clashes with its Communist next-door neighbour during the height of the Cold War, a secret struggle far from the lenses of Western photojournalists.

These clashes rarely made international headlines, but they came at a time of great tension between the two Communist countries. China was in the throes of its Cultural Revolution while the Soviet Union was enjoying détente with the US; China had also recently tested its first nuclear bomb, built with the help of the Soviets in friendlier times.

Amid these contemporary tensions was an old wound – a series of territorial disputes along the long border between the two countries.

One in particular, which took place 1969, was particularly brutal. The museum contains a witness to it; a Zorki-4 rangefinder, a reminder of a battle which nearly pitched the USSR and China into full-scale war. It belonged to a young Soviet photographer who died in the clash.

Nikolai Petrov was a Russian soldier from the Siberian city of Ulan-Ude, not far from the Mongolian border. He was called up to military service in November 1968, when he was just 21 into the Border Guards. He sent a letter to his mother: “Mom, I became a projectionist. This is my main specialty. Films go twice a week, the rest of the time I will be engaged in photography!! And filming!! Not just on my own, but truly, officially. I will shoot with the Krasnoyarsk camera.”

His interest in photography had been encouraged by his mother. “My Kolya loved taking pictures,” his mother Maria Zakharovna wrote in a letter, reprinted on the post on Pandia.ru. “As a child, I bought him somehow a Smena-2 camera. There was not enough money for the rest of the photo accessories. The time was difficult, but we lived on my small salary. Kolya developed films in a half-litre jar, printed photographs through a filmoscope. Sometimes it turned out well, but more often the quality of the photos was low. But Kolya did not lose heart. In general, he was a persistent person.”

One of the areas under dispute was an island in the Amur River, known as Damansky by the Russiabs and Zhenbao by the Chinese, about 167 miles (270km) south of Khabarovsk. The Chinese believed that the island was amongst territory seized by the Russians between 1840 and the beginning World War One. Both countries had massively increased military forces around the border amid the Chinese nuclear tests. The Soviets restored isolated border posts that had lain derelict since the 1930s.

On 2 March, the Amur River was frozen over around Damansky Island; the brutal Siberian winter had not yet ended

The Russians believe the battle that took place on 2 March 1969 was extensively pre-planned by the Chinese a few months earlier. They think the plan ultimately came from Chinese leader Mao Zedong himself – a surprise attack to eliminate Russian Border Guard units and allow the Chinese military to seize the 182-acre (0.74. sq km) island.

In November 1967, Soviet border guards had expelled Chinese fisherman from the tip of Kirkinsky Island, only a few kilometres north of Damansky. By February the Russian units near the disputed zone were warned that Chinese forces might try and seize territory by force. Lieutenant General of the Border Troops Vitaly Bubenin wrote some 35 years after the clash.

On 2 March, the Amur River was frozen over around Damansky Island; the brutal Siberian winter had not yet ended. Petrov’s detachment was sent to expell a group of Chinese soldiers which had been seen on Damansky Island. They met the Chinese on the iced over Amur. Petrov was there, capturing images on his Zorki-4.

One of the first he took was of a group of around 30 Chinese soldiers standing on the ice near the island. This was a diversion; behind them, a group of around 200 special forces soldiers had set up positions for an ambush, hoping to lure the Soviets into a trap.

The Soviets took the bait. The Soviet detachment’s commander, Senior Lieutenant Ivan Strelnikov, is seen facing the camera, talking to some of the Chinese soldiers. Another Soviet soldier is seen carrying a movie camera. 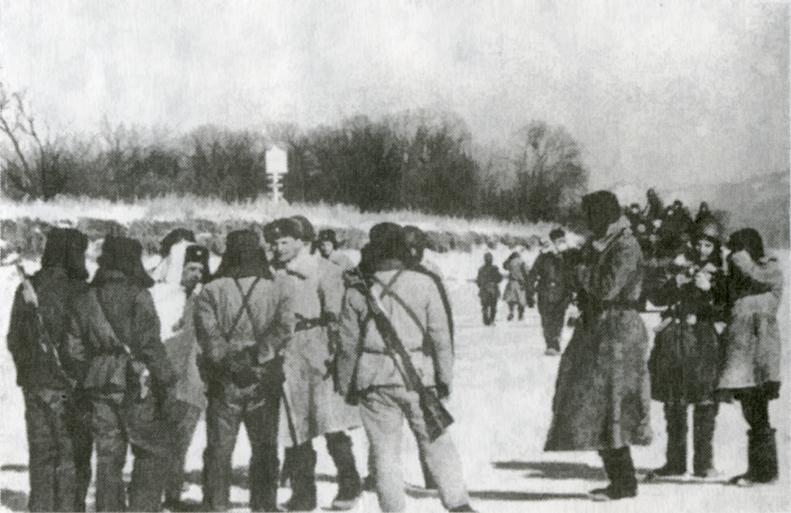 The Chinese also had a photographer present, and the following image is one taken by an unidentified Chinese photographer during the same meeting. 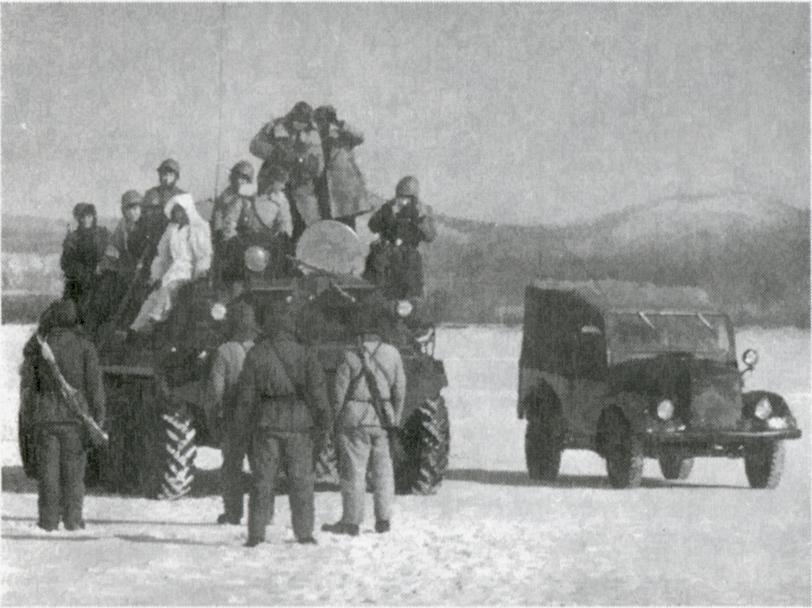 Petrov’s last roll of film (more images can be seen on the Pandia.ru post – Google will translate it) show Soviet soldiers and Chinese troops eyeing each other across the frozen river. His last pic – seen below – apparently shows the Chinese soldier on the right raising his arm to give the order for his troops to open fire.

Petrov, the unarmed photographer, was one of the first to be hit, shot in the neck by a Chinese soldier believed to be called Zhou. He fell on top of his camera; the Chinese did not see it and confiscate it. All seven Soviet soldiers in the group Petrov had been part of were killed. When his body was recovered on 16 November, so too was the Zorki.

The clash led to nearly a month of combat, the Soviets desperately trying to dislodge the Chinese from the island. The Soviets ended up sending tanks to try and take the island; one of them, a T-62, was captured by the Chinese and is now on display in the Military Museum of the Chinese People’s Revolution in Beijing. The Soviets attacked behind the Chinese lines; by the end of the month more than 300 Chinese and nearly 60 Russians had been killed.

Petrov’s last film was developed, a time capsule from a day when the simmering tension between two nuclear armed communist powers spilled over. The clash at Damansky – and other skirmishes between the Soviets and Chinese during 1969 – thawed previously frosty relations between the US and China. Secret overtures were made by the US through Pakistan and Romania which lead to US President Richard Nixon’s visit to China in 1972 and the resumption of full diplomatic relations between the US and China.

That in turn led to the Soviets diverting more of the economy into the arms race, fearing they were being encircled. This sowed the seeds for the glasnost reforms of the 1980s and eventually the break-up of the Soviet Union.

Fifty years ago this month, the Russians and the Chinese reached an agreement over the border, one that remained almost until the end of the Soviet Union. In May 1991, the USSR ceded authority to the island to China; nowadays, it is part of a wetland reserve.

Should you visit the military museum in Khabarovsk (which Kosmo Foto did, on a Trans-Siberian journey back in 2004) you will find Petrov’s camera on display, along with the young photographer’s stained and discoloured military ID.