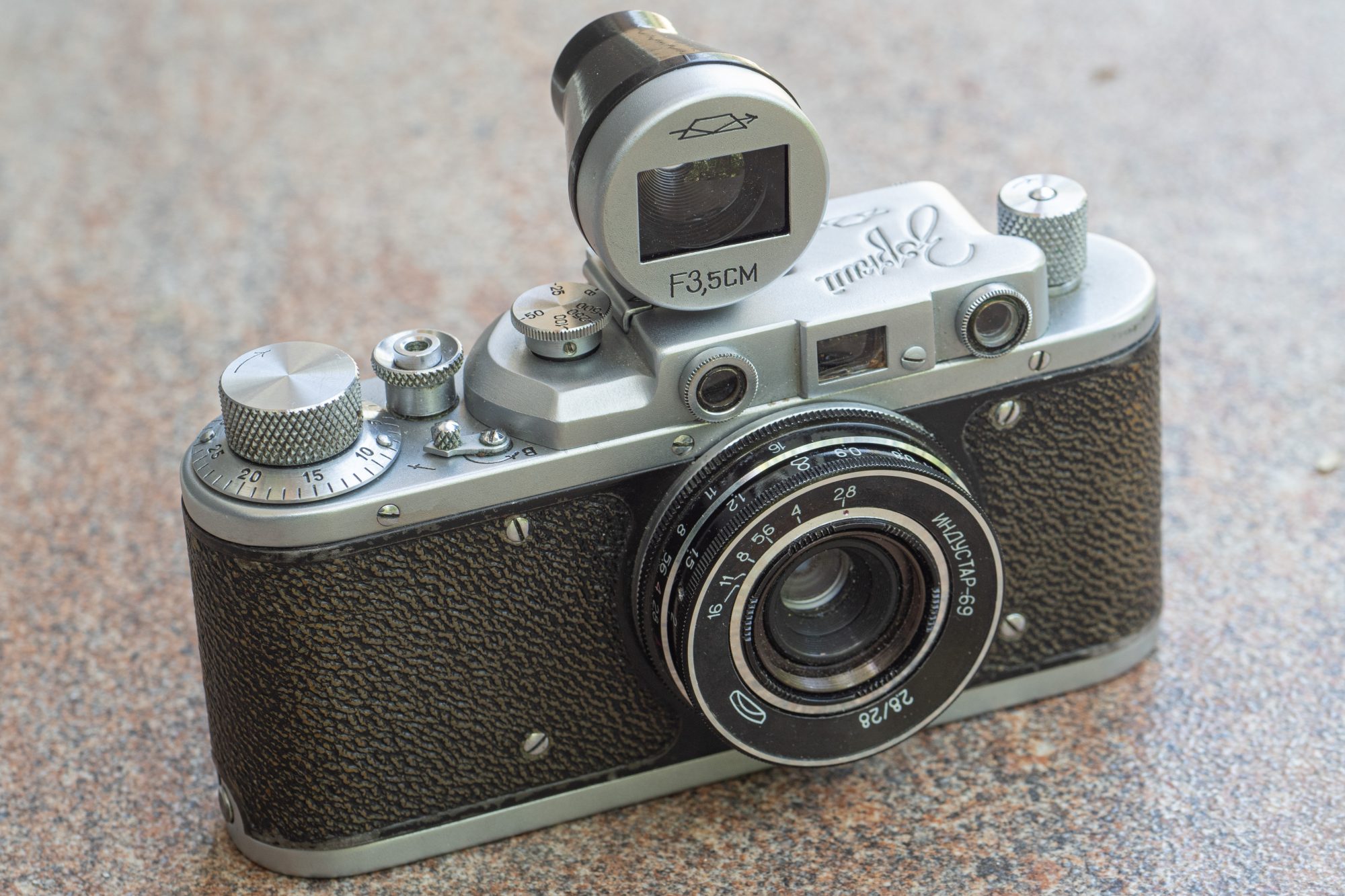 So, you have a nice Soviet rangefinder and love the photographs on standard 50mm lens, and now you want to try wide angle? You’re already bought a nice 35mm viewfinder and now you need a lens to go with it. You’re looking on the internet and find that there is a good Soviet-made Jupiter-12 35/2.8 lens in L39 mount.

It’s indeed a good lens but price kind of stops you. It’s about $100. Not quite expensive, but also not cheap.

Well, there is another solution: the Industar-69. This is a 28/2.8 lens for another Soviet camera, the Chaika. Chaika (Seagull) is a simple half-frame camera made in USSR in different versions from 1965 till 1974. Named after call sign of Valentina Tereshkova, the first woman in space, it had a removable lens (can’t say interchangeable, because there were no other lens for this camera), and the reason to make it removable was to use the same lens on an enlarger for printing photos. However, no such enlargers ever produced either!

Anyway, this lens is simple, and quite cheap (you can find it together with the camera for about 10 times cheaper than Jupiter 12 lens), but it can deliver pretty good results though. So why not to try it on a full frame rangefinder?

I must say, I’m not a pioneer in this at all – there are several reviews on the internet and most of them say: it’s hard, it doesn’t cover the full frame and it’s just for fun. I do love to read reviews, but also I love to try obvious things by myself, so I did my own test, and here what I found.

There are some reasons why you wouldn’t want to use this lens on a full-frame camera, so let’s go through them.

First: The Industar-69 has the same L39 mount, but different flange distance (27.5mm instead of standard rangefinder’s 28.8mm), and therefore cannot be mounted on L39 full-frame rangefinders without some complicated tinkering. It is correct, but actual modification requires only a screwdriver and unscrew six screws and that’s it. There is nothing complex in it, and all can be done in five minutes.

Second reason: The Industar-69 does not cover full frame. That’s also correct, but it is a 28mm lens and when cropped to a full-frame 35mm equivalent, it works pretty well. After all, we want to replace with it a 35mm lens, not a 28 one. You can also use it for making photos with nice vignetting when not cropping, so here you have two options, which is good.

Third reason: t’s just for fun. Well, not quite. The quality that this cheap lens delivers is pretty comparable to the Jupiter-12, even when cropping the frame. Before I start to say how to use Industar-69 on full frame, I’d like to show you some sample photos first. They are all done on a Zorki 1 camera with Industar-69 mounted on it. All of them are cropped versions.

So, how to use the Industar-69 on rangefinder camera? I will show you the whole process.

The lens has to be modified. By default, this lens will not focus all the way to infinity on rangefinder cameras due to the different flange distance. But the difference is pretty small, and we just need a screwdriver to change it. There are plenty of guides on internet how to modify Industar-69 for digital mirrorless cameras, but to make the process simple I made my guide here with some additional explanations.

There are three screws on Fig. 1 that hold front lens rim (1). You need to unscrew them and remove the top rim by pulling it up (2).

On Fig. 2 you can see removed top rim and three screws that limit the helicoid movement. In most guides on internet they say that only screw one that limits helicoid movement further than the infinity mark has to be unscrewed, but also screws two and three have to be unscrewed too as they also limit the movement of the helicoid. After that, you may mount the top rim back on the lens. Check the right position of it with the aperture mark on the helicoid and aperture scale on the rim.

Now we mount the lens on camera to find the infinity position. For that we will need a one-side piece matte glass or plastic that you should mount, with the matte side towards to camera (Fig. 3). Here you can see that I used a Zorki-4 camera as it has removable back cover. I was shooting the film on a Zorki 1, as it’s relatively smaller camera to carry around. But we can’t do this procedure on Zorki 1 with its bottom-loading system. However, I knew that my Zorki 1 and 4 adjusted the same exact way so what works on Zorki-4 will work on my Zorki 1 the same way.

One thing – you better use a magnifying glass to check proper infinity adjustment on the glass. It will normally require to screw the helicoid deeper into lens body on about 1-1,5 turn. Almost to the maximum possible position. And when you will see that objects at infinity are focused correctly, you need to check the scale shift.

On Fig. 4 you can see that on my lens correct infinity position is right above the number “4” on the aperture scale. On your lens it can be different, of course. You can make an additional mark on the scale for this position or remember where it is, I just painted number 4 in red. So this is how you will find your correct position for scale focusing with the lens. For all other distances to be correct, you’ll have to make sure this is set correctly.

Yes, of course the Industar-69 does not have a proper tail for using with camera rangefinder system, but as this is wide angle lens, scale focusing does not require exact focusing to achieve sharp results, and scale focusing becomes a pretty simple procedure after several tries.

As you can see, the process is quite simple and doesn’t require any special skill or equipment. It can be done pretty easily, and takes between five and 20 minutes.

This is what I did, and here is my setup all ready for shooting: 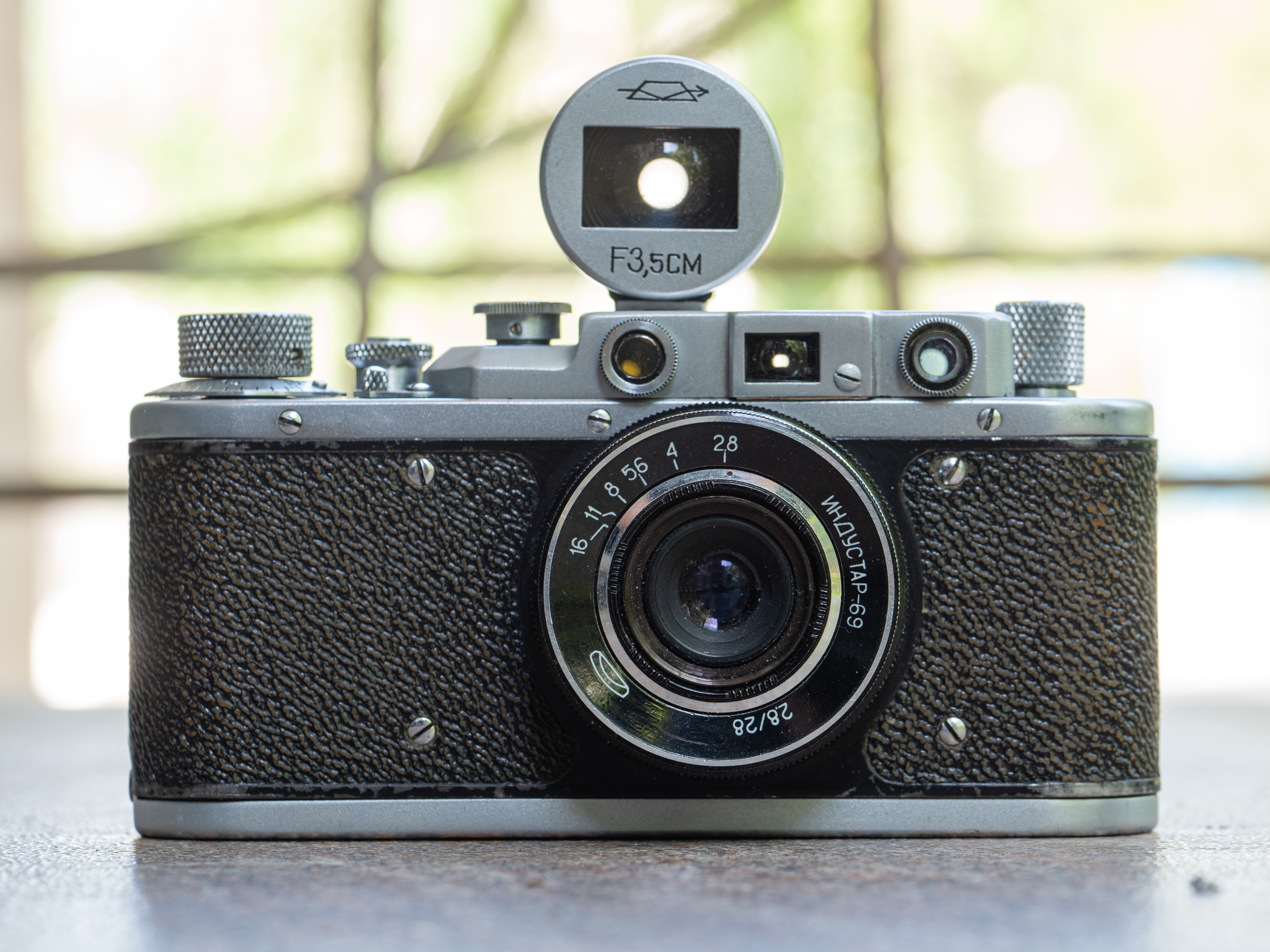 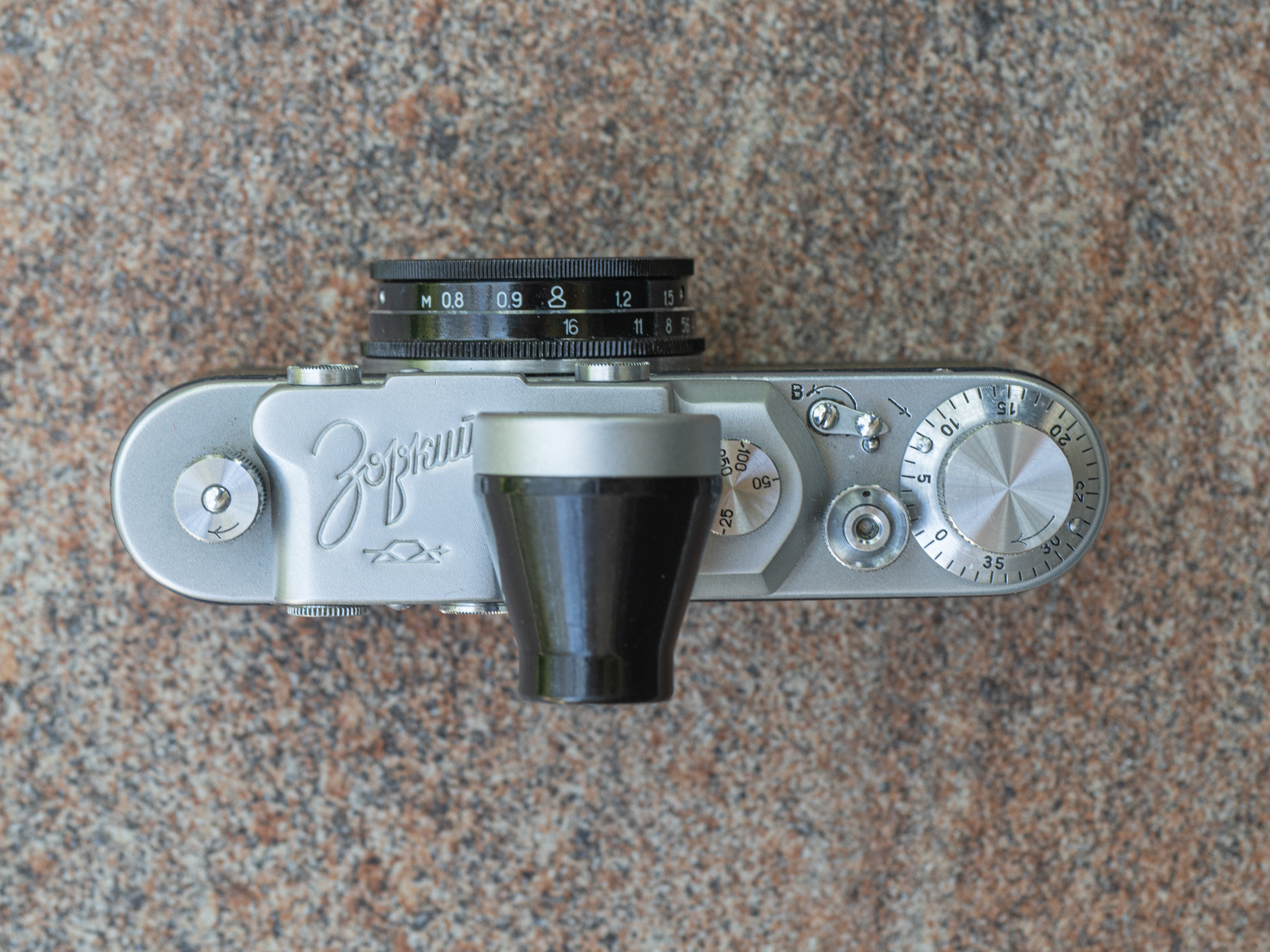 Doesn’t it look nice and tiny? I think it is. I used a 35mm viewfinder and found it very suitable as you see the cropped frame when aiming. Any matter, the difference between 28mm and 35mm is rather small.

Shooting itself came out as easy and enjoyable as any scale focus shooting, once you’ve become used to it. I used Lucky SHD 100 and Lomography 100 black and white films. I found it pretty easy focusing on close-ups too, and it was a kind of pleasant surprise. Here are some uncropped results that I found quite unnecessary to crop.

In the test I also used a Jupiter-12 35/2.8 lens to find how these two lens compared. For digitising I used an Olympus Pen-F with 60/2.8 macro lens, and two Nikon SB910 speedlights as a light source.

How do they compare? Here is a same shot made on Jupiter-12 and the other on Industar-69, cropped to fit the size and position of Jupiter’s version. Can you tell which is which?

Before you will read the right answer, let’s take a look at how the frames compare.

As you can see on Fig. 5, difference between 28 and 35mm frames is about the size of an APS-C sensor compared to full frame. Not that much that cropping would cause a significant quality loss.

To make the decision simpler (or maybe more complicated), take a look at the details compilations. Please note that both frames were shot on 2.8 aperture and digitised on the same scale with following upsizing of Industar-69 crop to match the scale of the shots taken on the Jupiter-12.

Well, probably not surprising to find that the top shot was made on the Jupiter-12 and the bottom one on the Industar-69. However, the difference, if any, is not so significant that one could tell straight away. Keep in mind that the Industar’s shot was cropped and upscaled and that will always cause some loss of detail. If I’d digitised it with a different set-up, I believe the difference would have been even less obvious.

Despite being a cheap, half-frame lens, and obviously one that cannot compare to a dedicated full frame lens in any way, the tests show the lens is definitely useable on a full-frame camera, and that was a pleasant surprise to me.

The Industar-69 is not a toy, but a very good and interesting alternative for wide-angle shooting on Leica screw-mount cameras, and that can deliver pretty interesting results both in terms of quality and atmosphere.