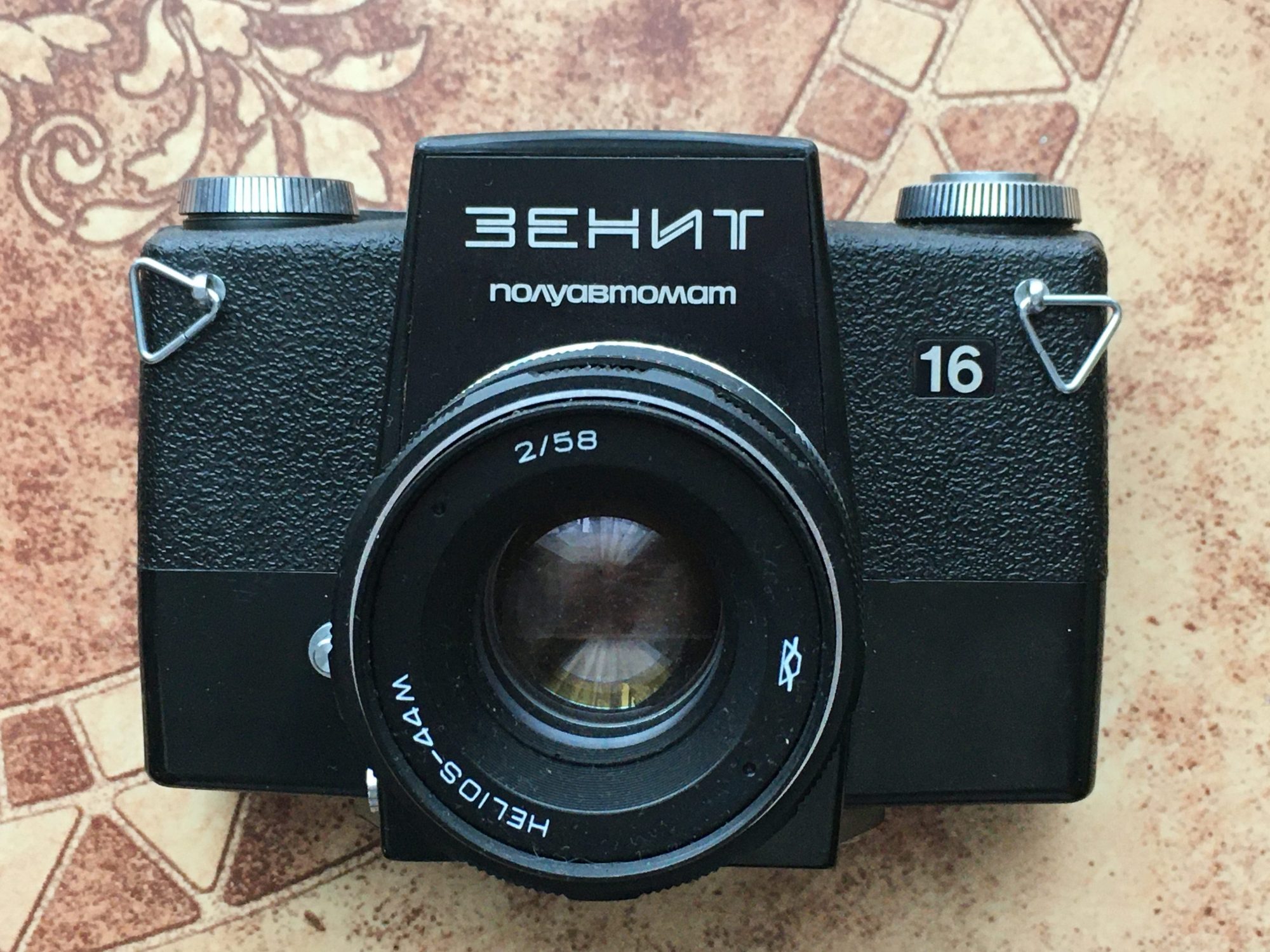 I repair various old cameras. Cameras from different countries. Cameras from various eras of production. These cameras were produced from the 1910s up to the most recent film cameras with mechanical shutters, just a few years ago. I think I can repair almost any mechanical device. It is just a matter of time spent and effort.

I have never had a chance to repair the Zenit-16. I have had this camera on my shelf, as a part of my collection for many years, and it I knew a little bit about it. This camera has an unusual shutter with movement of the curtains along the short side of the frame window, and is quite rare. Only 11,124 of these cameras were produced, a very limited number for the Soviet photographic industry.

One day I got another Zenit-16 very cheap. It was broken. I had some free time and decided to fix the faulty camera.

What is the most interesting process in repairing of a new and unfamiliar camera? Analysis. Analysis of the internal structure, an attempt to understand the relationships of components and the interaction of parts. I have a lot of experience with many cameras, and almost all cameras use almost the same operating principles, despite exterior differences. But not so with the Zenit-16!

This camera has thrown me into a one-man technical and engineering admiration club! What is the reason of admiration? A number of unusual technical solutions inside the camera.

The first oddity is the unusual way the camera works. Most SLR cameras with an instant return mirror work like this: during camera winding, the shutter is cocked and at the same time the mirror mechanism is cocked too. The mirror mechanism usually has two springs – the first spring for lifting the mirror up and the second spring for returning it down. When you press the release button, the mirror raising mechanism is triggered, which releases the shutter, and the shutter, after working releases the mirror returning mechanism. The cycle is completed, until the next mechanical cycle.

The second oddity is the uncommon construction of the shutter. There are many different kinds of mechanical curtains shutters. And there is always one principle in their work: the release of the first curtain causes its movement, the end of the movement of the first curtain initiates the operation of the governor, and the governоr, after its activation releases the second curtain.

Except with the Zenit-16 shutter, that is. After pressing the shutter release button, the mirror mechanism starts working. Is the first curtain released at the end of the mirror motion? No, the special timing disk goes into operation. This is a heavy metal pancake, the purpose of which is to uniformly and stably cut off the time of the longest shutter speed – 1/15 second. This heavy flywheel sets the release time for both curtains. And due to its heavy weight, it’s very stable. The release of the first and second curtains happens absolutely independently of each other.

And another interesting feature: the second curtain always releases at the same moment in time – at the end of the cycle of the flywheel. But the release of the first curtain begins at different moments of time, depending on the selected shutter speed. The shorter shutter speed, the later the releasing of the first curtain. For example, when shooting at a speed of 1/1000, the first curtain will be released at the end of the flywheel cycle, that is, after a pause of almost 1/15 of a second. Is it good or bad? It’s hard to say definitely.

But during live shooting, the delay is almost imperceptible. And an undoubted advantage of such a system is the high stability of the shutter speeds and the evenness of the movement of the curtains. Why? Because nothing affects the movement of the curtains, none of the mechanisms. (Yes, the second curtain interacts with the mirror unit. But it happens after closing the frame window!)

All interaction between the two mechanisms works not through a system of levers, but by one metal ribbon. And by the way, the shutter speed selection mechanism has a separate adjustment for each speed. That is, each shutter speed can be individually adjusted. And adjusting one speed does not affect other speeds at all! Of course, from the point of view of mass production, such a solution is not very advantageous. But for achieving high accuracy of the shutter speeds it is a great solution.

The fourth oddity is an uncommon winding mechanism. The winding mechanism also use a metal ribbon. The ribbon is simply wound on the drum under the winding lever, with other end of the ribbon pulling and rotating the curtain spring drum. One drum is on top, the other at the bottom part of camera, they are located in different planes, but the tape perfectly transfers the force from lever to main springs through two rollers. An amazingly simple and effective solution.

The next oddity is unusual frame counter. The counter is constructed as a separate easy-to-remove module. The counter determines the presence of film on the take-up spool and calculates the necessary angle of rotation of the take-up spool to advance the film to next frame. Why it’s needed to change the angle of rotation? Look carefully to the picture with the opened back door – the Zenit-16 does not have a transport sprocket! This camera does not count eight perforation holes per every frame.

An unusual solution? Yes! Is it necessary? Probably not. The usual transport sprocket does measurement of frames perfectly and guarantees a stable inter-frame gap.

Well, the last unusual thing is the easily removable body shell. The shell consists of two plastic half-shells. Each half of shell is secured with four screws only. To disassemble the camera, you need to remove the advance winding lever, the rewind knob and remove these two half-shells! That is all! The entire camera mechanism is assembled on the frame base. A very interesting solution, but slightly strange. The simple disassembly of the camera is a dubious advantage over other camera designs.

So, this camera is completely unique!  Who is the designer of such ideas of this unusual camera? The engineer responsible is Anatoly Padalko, while he was the chief designer of photographic equipment at the Krasnogorsk plant (KMZ).

It is well known that pretty much all Soviet camera came with problems. What problems accompanied this camera? The first and main problem is the frame counter unit. The design required precise quality of parts. But technical processes at KMZ at the time were not capable of reaching the required accuracy. A malfunction of the counter unit caused complete inoperability of the camera.

But why did the designers select this version of counter, instead the most common solution with transport sprockets? The answer can be found in the factory newspaper “Soviet Patriot” on 10 June 1975. In article says there was a project to use non-perforated film 35 mm width for increasing the frame size! A 32×48 mm frame format was proposed. This is an almost double increase in area compared to 24×36 size! It’s almost half of frame size of medium format, while still useable in 35mm cameras like the Zenit-16. Yes, this camera could have become revolutionary.

The remaining units of Zenit-16 were reasonably reliable. But production of a good mechanical camera with TTL electronic exposure metering was not possible in the Soviet Union at that time. Users needed automatic operating modes and coupling the exposure meter with shutter speeds and aperture. KMZ did not made more than experimental models. Why? Because the era of electronic controlled shutters happened too soon. If this camera was born 10 years earlier, it would have become incredibly successful!

But why did this really good camera did not replace the Zenit-E in the camera production of KMZ? Of course, these Zenit-E was not perfect, but it was more easily sold in the domestic and foreign markets, and they were easier and cheaper to manufacture. In 1974, the Krasnogorsk plant produced 393,657 Zenit-E cameras and only 445 Zenit-16s. Simplicity, cheapness and invariability of the design were the main criteria for the success of a product in a socialist economy. 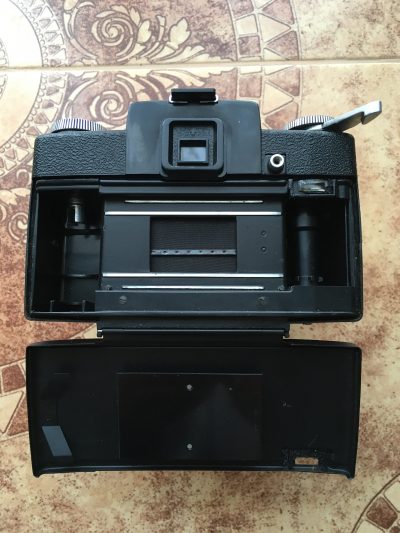 There was no reason for the those in the Soviet market to get another Zenit, which was more expensive to produce and more expensive to sell. The Soviet government’s market needed not profit, but quantity. And KMZ plant as a part of this centralised Soviet economy had no need for cameras that required special effort for critical parts and high-quality cast plastic bodies. The Soviet plant needed the fulfilment of the socialist government plan, but not the highest quality of cameras.

The Zenit-16 turned out to be on the sidelines of evolution. An engineering gem unnecessary to contemporaries. Forgotten by its descendants.

This camera really deserves to be remembered.

The table below shows production numbers each year compared to the Zenit-E:

[…] of the pair to go into full production – had a short and troubled life. As experienced repairer Oleg Khalyavin wrote for Kosmo Foto in 2020, the Zenit-16’s novel exterior also had a huge effect on the camera’s mechanics. Almost […]