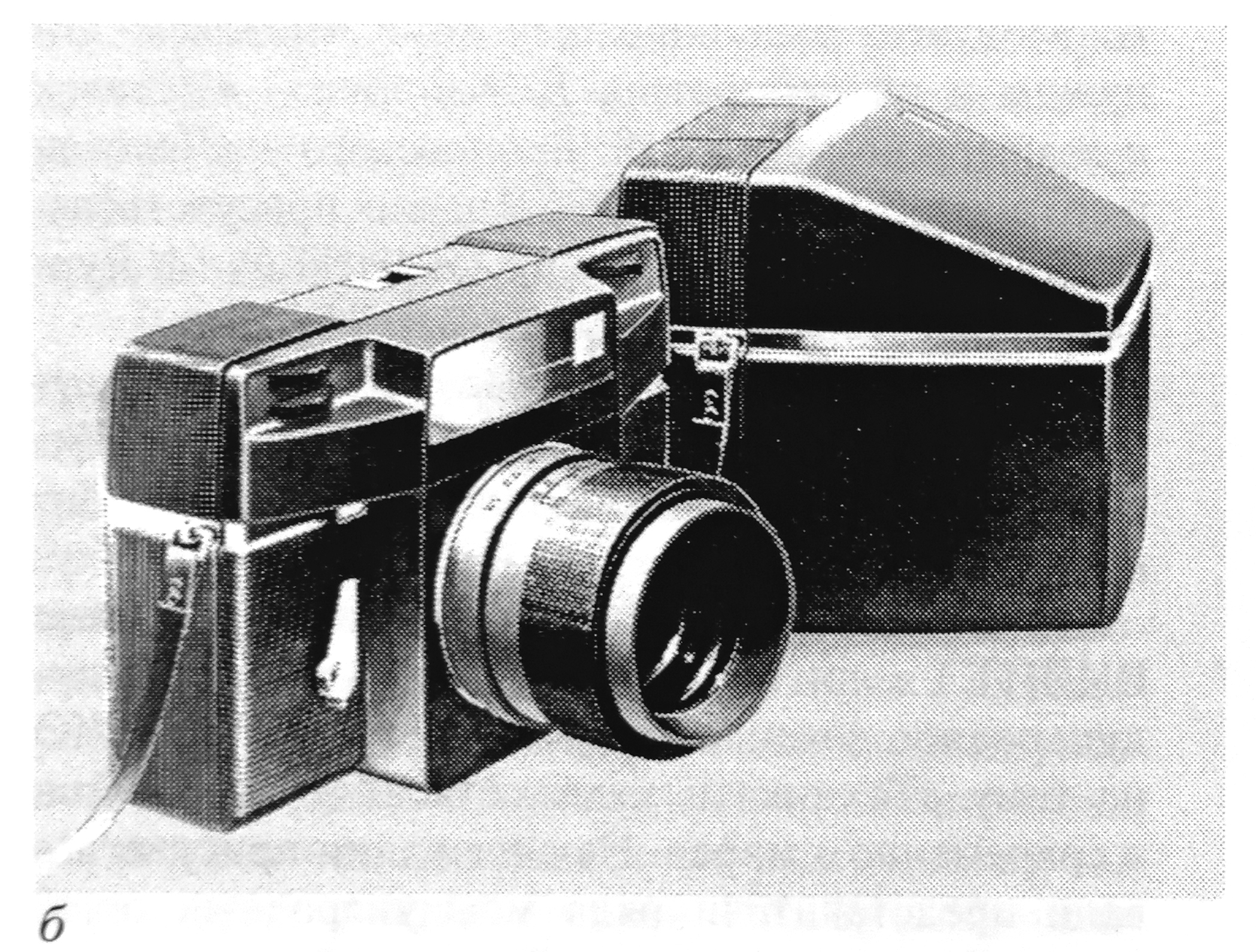 The giant Soviet photographic powerhouse (which is still continuing today) made their first M42-mount prototypes in the early 1960s. By then, M42 was fast emerging as the perfect choice for amateur photographers, spearheaded by the SLRs coming from Pentax and East Germany’s Pentacon.

Zenit’s vast M42 family began with the Zenit-E, a camera built in such vast quantities – eight million at least , and some believe as many as 12 million – that the Soviets had to build an entire new factory in Minsk to keep up with demand. The Zenit-E was kept in production from 1965 to 1982, and spawned an entire family of cameras that remained relatively unchanged internally until the end of the century. The last of them, the Zenit-412LS, only entered production in the year 2000.

But it would be a mistake to think that Zenit-Es clones were the only SLRs KMZ’s engineers came up. The Zenit family had several interesting offshoots, not least the Zenit-4/5/6 family of leaf shutter SLRS (a Soviet answer to West Germany’s Voigtlander Bessamatic). But in the early 1970s they were determined to update their family of M42 SLRS.

The Zenit-E family are sturdy and reliable, but rather lacking in features – not just today, but even when they were released in the 1960s. Chief among these were the relatively modest range of shutter speeds – from 1/30 to 1/500 – and their cloth shutter. This lack of features made it very easy for the camera to be mass produced but meant it looked increasingly old-fashioned compared to competing Western designs. Led by designers Vladimir Runge (still living in Moscow today and lecturing on Soviet camera history) and V Shablevitch, KMZ began work on a camera that would, hopefully, bring the M42 bang up to date.

As well as adding a battery-operated TTL lightmeter visible in the viewfinder (a great leap forward from the E’s uncoupled meter readout on the top plate), the new camera would sport a shutter that could travel as fast as 1/1000 of a second. But it wasn’t just the camera’s internals that would undergo a revolutionary change. KMZ wanted its shape to be equally revolutionary.

Its creation was partly thanks to an unlikely source – the United States. And in particular, one of the country’s most visionary designers.

“Raymond Loewy and his company Raymond Loewy Design took part in the design of Soviet cameras,” says Russian photography historian Vladimir Zverev. “He is called the ‘father of industrial design’.

“A lot can be said about this designer. It was he who made streamlined steam locomotives, for the first time removed the “unnecessary” radiator grill from the car and made the recognisable shape of a modern Coca-Cola bottle.” Loewy, a Frenchman who had moved to the US in 1938, was also responsible for such design classics as the Studebaker carmaker logo and the livery of Air Force One, the converted airliners used to fly the US president.

“In 1973, Loewy developed a new model of the Moskvich car, but the car did not come out, since there was no suitable technology for the production of this model at the plant,” Zverev says. “In 1975, representatives of the USSR Ministry of Foreign Trade and Loewy signed a cooperation agreement. More than a dozen products were selected that required a new approach and bold innovative solutions and were of potential interest for the domestic and foreign markets. Among them: a project of a Moskvich car, an interior of a Tu [Tupolev] plane, a Zil refrigerator, a Zenit camera, a river boat and others.”

“R Loewy completed several projects and handed them over to the relevant authorities, which, however, were in no hurry to introduce them into production …

“Unfortunately, these design works of the American specialist and his staff have not been implemented in real life. Only a three-chamber refrigerator was put into production, with great distortions and only three years after the project was completed. The original project of the Moskvich car for Izhmash was never implemented at that time.”

Runge himself spoke in 2013 about the particular issues the American designers had when trying to work with Soviet industry. “The fact is that the work of an American designer had to be paid in currency. And only defence enterprises had currency in the USSR,” he said. “For example, the Izhmash plant, where they produced Moskvich cars (and weapons, for export) and KMZ, where they produced cameras (and various optical systems, for export).

“The American designer guaranteed success only if he was devoted to all the subtleties and peculiarities of the manufacture of a particular product. But he could not be admitted to defence enterprises for reasons of state secrets.”

“In the case of the Zenit camera, it was somewhat simpler. Soviet designers met with employees of the French bureau of the Raymond Loewy company on neutral territory (at one of the pavilions of VDNKh (Exhibition of Achievements of the National Economy) in Moscow. They brought all the necessary components from the filling of the future camera. And without revealing any state secrets, they consulted foreigners on all issues of interest to them.”

Loewy’s concept design for the new camera’s plastic body (pictured at the top of the post) was more successful. Loewy’s concept wrapped the new camera’s internal mechanisms – all still designed by KMZ – in a new plastic shell. It looked unlike any other SLR made anywhere in the world, let alone anything KMZ had so far attempted to build.

KMZ initially planned two models based on this design, a more traditional all-manual design called the Zenit-15 and the semi-automatic camera called the Zenit-16, whose TTL meter would allow the correct exposure to be chosen without the photographer lifting their eye from the viewfinder. “While creating an improved model of the Zenit-16 camera, the developers abandoned the traditional horizontal division of the camera into three parts,” wrote Runge  and Olga Druzhinina in a booklet for an exhibition on the designer at the Moscow Design Museum. Instead, the new Zenit’s body was split into four separate pieces: a metal chassis with most of the camera’s internal workings attached, and two plastic flaps built around the metal body, top and bottom. A plastic cover, hinged at the bottom, was the camera’s back door.

The more modular design was thought to be easier for production and repair, as the internal parts would be easier to gain access to. “The parts of the came were so closely linked that any change or movement of one of them required significant changes to the other,” wrote Druzhinina and Runge. “In order to create new compositional solutions designers must have serious knowledge in optics, mechanics, electronics and understand the specifics of technological processes of mass production.”

Loewy’s design brilliance helped create a truly innovative body for KMZ’s new SLR, but the Zenit-16 – the only one of the pair to go into full production – had a short and troubled life. As experienced repairer Oleg Khalyavin wrote for Kosmo Foto in 2020, the Zenit-16’s novel exterior also had a huge effect on the camera’s mechanics. Almost everything that would normally occur inside an SLR camera when it takes a shot had to be completely rethought for the Zenit-16. The litany of movements that take place after a shot is taken – returning the mirror to the viewing position, the interplay between the shutter curtains and the governor to ready the shutter again – are a completely different process in the Zenit-16. Most of the interaction between the shutter mechanism and the curtain, Khalyavin wrote, hinged on one single piece of metal ribbon. Another metal ribbon was involved in winding the film on as well, transferring force from the wind lever through to the shutter curtain drum.

Loewy’s design genius helped create one of the most novel film SLRs ever produced – not just in the USSR. The camera itself, however, was plagued with early reliability issues, especially over the shutter. The Zenit-16’s production run lasted only four years (1973 to 1977) and little more than 11,000 were made, making it one of the rarer cameras to be produced under the Zenit name.

The Zenit-16 might not have been the success envisaged, but its development led KMZ towards electronically controlled-shutter SLRs such as the Zenit-19 (probably the most advanced Soviet M42 SLR) and a whole family of Pentax K-mount cameras in the 1980s. Perhaps most importantly, it showed some friendly co-operation between the superpowers was possible, even at the height of the Cold War.