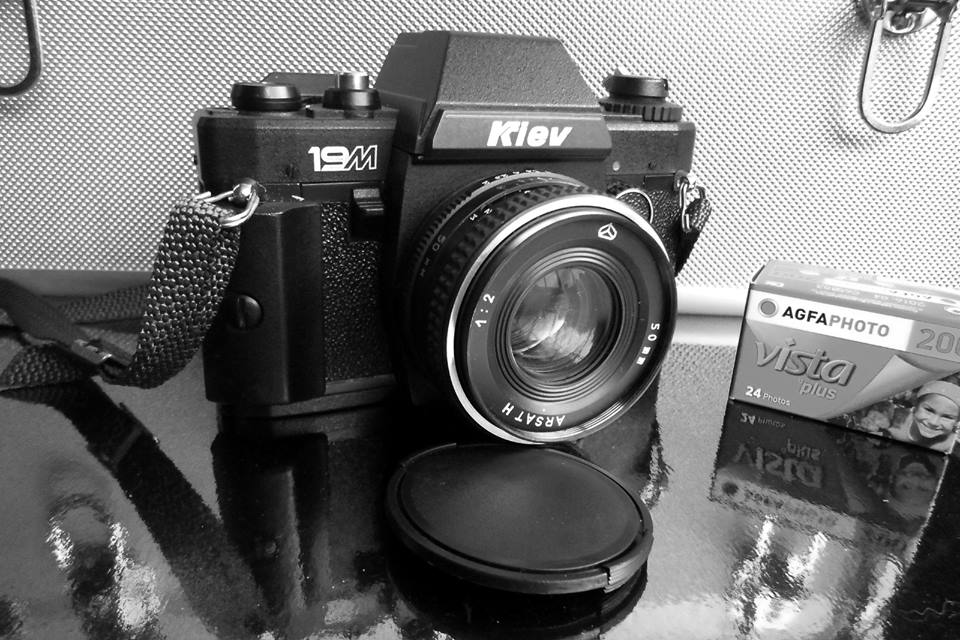 In the world of Soviet SLRs, one name stood head and shoulders above the rest: Zenit.

From the 1950s until the early 2000s, the giant camera works of KMZ churned out millions of SLR cameras. It was the Nikon, Canon, Olympus and Pentax of the USSR, all rolled into one.

But it wasn’t the only Soviet camera maker who made SLRs.

LOMO dipped its toes into the single-lens-reflex world with its Almaz-103 of the 1970s, a Nikon F2 lookalike with a Pentax K mount. It looked the part, but was beset with mechanical problems.

Further south, the Kiev-based Arsenal works made a giant leap forward in the late 1960s with the Kiev-10, the first camera in the world with automatic aperture-priority.

The selenium-powered Kiev-10 was followed by the Kiev-15, a brick-like monster with a CDS meter. Both of these cameras had a unique fan-shaped shutter and a proprietary lens mount.

Their lenses were exceptional, but no other camera could mount them without hard-to-find adapters; Kiev decided that for their next SLR, they’d look Westwards.

Most Zenit SLRs at this time sported an M42 lens mount, a mount also used by cameras from East and West Germany and Japan.  This universal mount was free to use without paying pesky royalties to bourgeois Western factory owners.

But the pros had, for the most part, long left the screw mount behind. Nikon’s F-series SLRs had become the tool of choice for photojournalists dodging bullets from the Sinai to Saigon. Part of the attraction was that quick-to-change bayonet mount – with a twist of the hand, lenses could be detached. No unscrewing your lens like an old-fashioned lightbulb when you wanted to change your lens.

The first SLR to come from Arsenal’s rethink was the Kiev-17, which appeared in 1975. Looking not a million miles away from a Nikon F, the camera featured a more traditional shutter and a shutter speed selector on a dial in the front, much like the Cosina Hi-Lite or the Olympus OM-10. Strangely for a 1970s SLR, the 17 didn’t have a meter.

The Kiev-17 stayed in production for a decade before giving way to the Kiev-19 in 1985. Broadly similar to the 17, the 19 offered a few refinements but also cut a few corners.

Out went the fastest speed of 1/1000. In came a CDS meter so you could leave the handheld meter at home. Instead of the envelope-stretching earlier designs like the Kiev-10, the 19 and its descendent were similar in spec to contemporary SLRs from KMZ like the Zenit 12XP; you had a meter and as long as you could live with a maximum shutter speed of 1/500 you were laughing.

The Kiev-19M followed in 1988. It’s a camera definitely aiming to impress; amongst the attachments are a plastic grip that can be screwed into the front right side of the camera, as well as a thick strap. This is no tough Nikon-in-Soviet-clothing. The camera is heavier than you’d expect, especially as so much of it is plastic. Early 19Ms had a metal top plate, but as production continued this was replaced with a plastic one. Unlike the 19, it allows open aperture metering.

The Kiev 19M came with both a blessing and a curse. Soviet cameras aren’t renowned for their robust electronics (save the Zenit 19) but even bearing this in mind the Kiev 19M has a dreadful reputation for shonky meters. The two I’ve owned have had been otherwise mechanically fine, but burdened with meters so erratic and erroneous that I’ve relied on the Sunny 16 rule or handheld meters. Simple centre-weighted metering on an otherwise manual SLR isn’t a difficult task to get right. It’s remarkable how many Kiev-19Ms have this problem. The 19M was one of the few Soviet cameras built with a meter sensitive enough to measure exposures at film speeds as high as 3200 – at least on paper.

And the blessing? The lenses. Soviet lens design was consistently excellent, and the lenses Arsenal made for the Kiev-19M were very good indeed, Most 19Ms were sold with an Arsat-H 50/2 standard lens in a Nikon F mount. As this review shows, the Arsat-H (H is the Cyrillic letter N, which signifies it’s Nikon mount) is capable of fantastic images, but it lacks the anti-flare coatings found on more modern lenses, so it can be prone to flare and fogging from bright sidelight. But it’s a capable lens that boasts wonderful bokeh at wide apertures. Even better is the Kaleinar-5H 100/2.8, a portrait lens that has a fantastic reputation, and not just among Soviet photography fans.

The 19M became more common in the West after the fall of the Berlin Wall; unlike many Soviet models, production continued long after the end of the USSR – the 19M assembly line only closed down in 2000. Export versions sometimes went by the name of Mirage 19M, with a new nameplate to attract customers who might be sniffy about spending money on a Soviet camera. It used to be offered as new by LOMOgraphy in the early 2000s.

The closure of the production line should have been the end of the Kiev-19M’s story.

It should have remained a camera collector’s curio – the Soviet Nikon with great lenses and sub-standard electronics. But it wasn’t.

In late 2017, a new camera was unveiled on the web, a few weeks ahead of a Kickstarter campaign. It came hot on the heels of the Reflex 35mm project. It seemed that two teams were working on new cameras at the same time. This camera was called the Ihagee Elbaflex, and the first pictures made it look oddly familiar.

Further investigation and discussion across camera forums and this interview with Ihagee on Emulsive showed that the Elbaflex was indeed a Kiev 19M – albeit one that had been extensively modified and improved.

The Elbaflex is a joint German-Ukrainian project, with the camera’s produced on the old Kiev-19M assembly line before being given finishing and calibration by German technicians.

The old plastic hand grip and some of the covering was replaced with inlaid wood, and the “Kiev” shell appeared to be made out of a higher-end plastic. The camera spotted revamped versions of the same Arsat standard lens that had won such a good reputation.

This Kiev-in-Leica clothing, however, lacks one thing – a meter. The Kiev-19M’s problematical meter design couldn’t be improved, so it was ditched. The Elbaflex is a meter-less camera which had a $530 body-only price tag for its Kickstarter launch but was expected to retail for $1500 once it went into production (Ihagee expected only to make a few dozen cameras every year). That could have bought you 20 or 30 Kiev-19Ms a decade ago. You might have even find one with a working meter.

The Elbaflex Kickstarter failed to meet its funding goal, but in the interview with Emulsive, Ihagee’s Stefan Immes said that did not necessarily mean the end of the project: “If the campaign doesn’t fund, it will be very disappointing and I would like to think that we will still produce a small amount of cameras.”

The Kiev-19M may, then, have an unlikely second wind well into the 21st Century.

[…] both Mike Eckman and lensbeam have reviewed this camera as has Alex Luyckx. Kosmo Foto carry a handy review of the Kiev 19M for comparison. Sovietcams as ever are a great starting point for information on this (as well as other soviet […]

[…] and tear over the years can work contacts loose. And some metering designs – I’m looking at you Kiev-19M and Pentax Electro Spotmatic – just weren’t very reliable in the first […]

The article is no doubt good, but in describing the line of Kiev SLRs the author does not mention the even better Kiev 20, which was produced before the 19 and already had open aperture metering, a self timer and a larger shutter speed range up to 1/1000.
It was, however, too expensive for the Soviet buyers and that is why a simpler Kiev 19 was produced, removing the open aperture metering and the top shutter speed and the self timer.