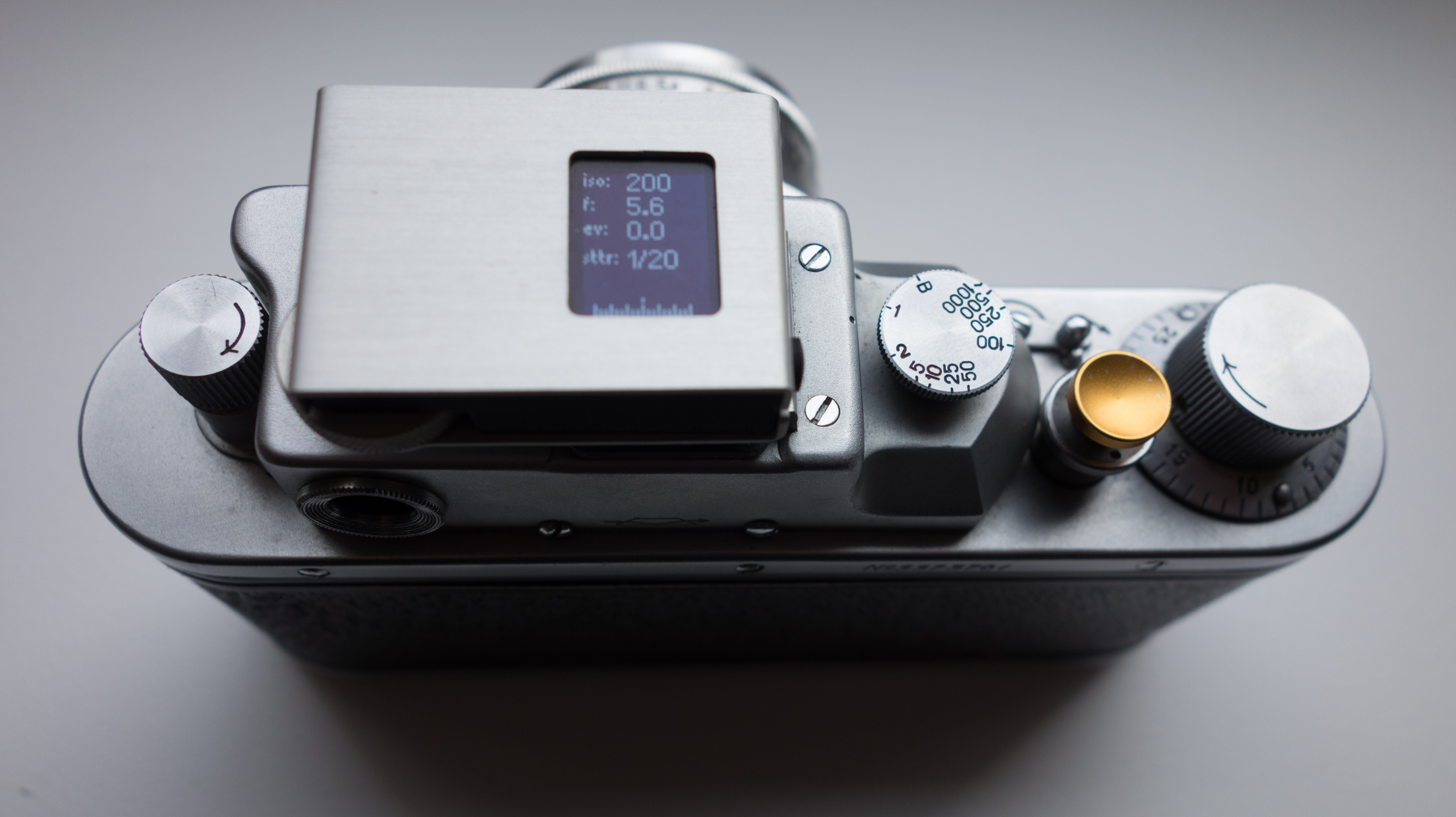 One thing you learn when you start using film cameras is that meters aren’t always included.

Even into the late 1960s, some cameras were designed without a meter. And even with the cameras that did come with meters, sometimes the years aren’t kind. Battery leakage can eat through electrical wiring. Wear and tear over the years can work contacts loose. And some metering designs – I’m looking at you Kiev-19M and Pentax Electro Spotmatic – just weren’t very reliable in the first place.

External meters were always an option. But the major drawback with these is that you can’t really meter and use the camera at the same time. The solution with some of these meters has been an attachment to mount them onto the hotshoe of the camera itself, like accessory meters in the 1950s and 60s were.

The Sekonic L-208, a modern meter made in the style of the classic Weston meters from the mid-20th Century, has an attachment that allows it to be mounted to the hotshoe. So too does the same company’s Digisix, an even smaller model. But these meters are designed as handheld – mounting them on the hotshoe is a secondary function.

Japan’s Cosina created the retro-styled VC Meter I (and its follow-up, the VC Meter II), featuring the classic Voigtlander brand name that Cosina had won the rights to. The VC meter, with its ease of use and pleasing design, has won many fans. But it’s not cheap. You’ll need to drop £250 to get your hands on one of these now.

But this year, there has been nothing less than an avalanche of new hotshoe meters. OK, avalanche might be overdoing it a bit, but there’s been several – it’s an unexpected burst of activity in a niche of analogue photography.

One of the most pleasing of the recent meters was the one made by Canada’s Reveni Labs, a one-man invention which made the leap from brainwave to blueprint to actual production. Kosmo Foto wrote about the meter just before it was launched on Kickstarter earlier this year; Matt later sent me an initial prototype to test, alongside an improved model with some added tweaks after feedback from myself and other testers. There’ll be a proper review of that meter coming in the coming weeks.

Hot on the heels of the Reveni Labs meter is this offering from Hedeco, the Lime One. Hedeco is based in Nuremberg in Germany and is the brainchild of inventor Johannes Heberlein. Heberlein has come up with a metallic meter which apes the look of some of the classic chrome camera of yesteryear. It certainly looks the part on my Zorki-3M rangefinder.

The new meter was launched in October on Kickstarter and like the Reveni before it did considerably more than the target; Heberlein was wanting to raise €25,000 but ended up raising almost three times that amount.

The Hedeco Lime One runs off one battery inserted in. the front of the meter, just below the metering eye. This helps power its display, a small OLED screen. This screen is nice and bright, the figures are nice and bright and the screen dims a little in brighter light conditions, making it easier to read. My eyesight is pretty much perfect and I find the figures very easy to read, but those who are longsighted might have some issues (though they will probably have them with most other meters aswell). The meter is definitely not hotshoe-sized, it’s about twice as wide as most hotshoes, with the hotshoe attachment on the right hand of the meter. It may not fit some cameras with a cramped top plate, but Heberlein has designed accessory holders to deal with this.

The Lime One has four modes of operation: aperture priority, shutter priority, manual and EV mode. Choose aperture priority and you can cycle through apertures using the knurled dial, giving you a matching shutter speed. Shutter priority is the opposite – it matches an aperture as you cycle through the shutter speeds. The manual mode displays a scale which reads up to -/+ 3ev and allows you to set the exposure where you wish. EV mode displays an EV reading depending on the ISO – one for those who like metering the old school way.

In aperture priority, shutter priority and EV modes the exposure can also be compensated, up to three stops either way.

It’s worth noting here the meter’s other specs:

This is of course, enough for even the most diehard landscape and sports photographers – the only realm of photography that this might not be suitable for is astrophotography or pinholes.

One great feature of the meter is the fact it constantly updates the readings – unlike the Reveni, which takes a reading which remains unchanged even if the light conditions do. The Lime One has literally two controls to activate it – the knurled wheel on the left-hand side and a single button on the right-hand side which turns the meter on. Press this twice and you get access to the meter’s menu: you can change modes, change the ISO, even calibrate the meter if needed, all by using the button and the knurled wheel to select. The wheel has click settings which are a big help. It does help make the Hedeco feel more like an object from the era of the camera it will be used one, notwithstanding the digital OLED display on the top.

I had the Hedeco for a few weeks and tested it with a couple of cameras, after having first tested it against my Nikon F100’s meter and my Sekonic L-208, both of which I know to be accurate. Obviously, a hotshoe meter is never going to be as easy to use as TTL metering system, but accessory meters like this were widely used in the days before integral meters – photographers loved them.

And there’s a lot to like with the Hedeco; the aluminium construction makes it pretty robust, and it takes only a few minutes to get to grips with how it operates – kudos to Johannes Heberlein for coming up with something that’s pretty intuitive to use. I could imagine those who’ve never used an accessory meter before taking to this pretty quickly.

I had time to use this with a couple of rolls on a Kiev-19 I recently won on an auction; the Kiev’s meter seemed to be pretty accurate, but I thought the Hedeco would be a great back-up just in case the Kiev’s meter turned out to be unreliable. According to Hamish Gill from 35mmc’s first impressions post a few weeks back, the meter has around a 45° field of view. This is pretty much exactly the same as a 50mm standard lens – so pretty much perfectly matched to the classic camera/standard lens.

Shooting in October/November meant the meter did occasionally tend to underexpose when pointed towards acres of overcast sky – just as your camera’s meter might if you pointed it at the sky rather than what you want exposed properly. The rest of the time, its suggested readings were very accurate indeed.

The prototype I used may, of course, be very different to the Kickstarter models that get sent out next year, or indeed other versions that Heberlein makes based on further feedback. But it’s definitely something I could see myself buying and popping on the top of a classic camera. 2020 has thrown up a few major curveballs, but a decent, classic camera-friendly hotshoe meter is definitely one of the more agreeable ones.

Excited about this meter, but after I did the money conversion, it’s not that much cheaper than a Voigtlander Speed meter in the US, and you have to have it shipped from Europe and mess with any fees associated with “importing” it. Might be interested when I see a US supplier! Seems easier to use than the Voigtlander…