This year has already seen a raft of new film releases (or announcements) from the likes of Bergger, Film Ferrania, Japan Camera Hunter, Dubble and Kodak – and now there has been more unexpected developments: two new film cameras.

The new Reflex SLR was unveiled by film photographer blog EMULSIVE shortly before the project was launched on Kickstarter. This 35mm manual-focus camera is a completely new design that harks back to film SLRs from the 1960s, looking like something that might have been released by the likes of Topcon or Fujica. But the camera doesn’t come from any well-known camera design – the Reflex was designed by Laurence Von Thomas, alongside a small team of designers and engineers.

The camera’s specs are pretty impressive – a fastest shutter speed of 1/4000th of a second, ISO up to 6400, and even a flash that can also shine continuous light (the camera is powered not by button cell batteries but by a rechargeable lithium battery.)

But that’s not all. Instead of one lens mount, the Reflex comes a modular mount system – one that allows you to replace the mount with a different one in case you want to use different lenses. The Reflex camera will ship with an M42 mount, but others have already been announced – Nikon F, Olympus OM, Canon FD and Pentax PK.

But that’s not all. The Reflex’s other noteworthy feature is a modular film compartment. Much like studio cameras like the Hasselblad 500, the film is housed in a removable back. This means you can take a couple of backs and load them with different films – low and higher ISO, for instance, or colour and black and white – and change them halfway through a roll without sacrificing the rest of the frames.

The cameras can be bought on Kickstarter for as little as £350 (body only), £399 or £439 with a reconditioned Helios or Pentacon M42-mount standard lens.

After a number of crowdfunded projects that have created digital projects that hark back to the days of film – such as the ‘Yashica’ Y35 – the Reflex project appears to be doing very well. The makers had intended to raise £100,000 – at the time of writing, and with the Kickstarter having run only six days, they have already raised more than £120,000.

As the camera project raises more money, other features are intended to be included in the finished cameras. The first of them is Bluetooth technology. “The idea being that the BLE would allow metadata to be send to a companion app and saved along side with other information and notes about each specific roll,” wrote EMUSLIVE when the project was announced.

The Kickstarter campaign finishes in early December, the cameras are expected to be produced in May 2018, making their way to customers in August 2018.

The Reflex had been hinted at for a few months with a low-level teaser online campaign – it didn’t, frankly, look at all like the clearly advanced, high-spec camera that was unveiled last week. 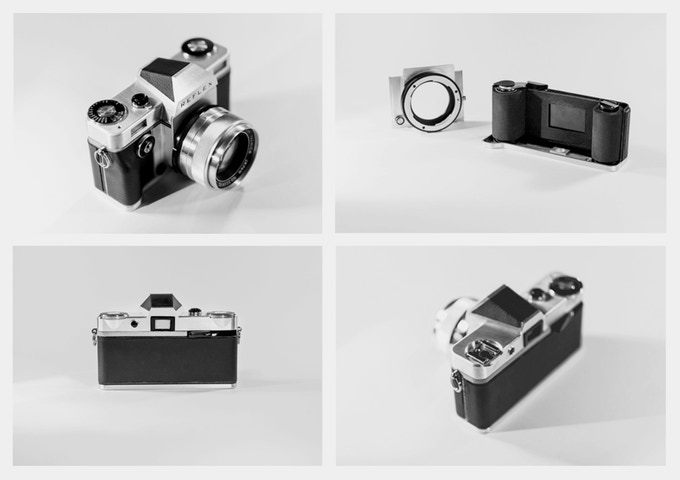 The project, undertaken with a small team, has come up with a completely novel design. It features all that you might want from a manual camera – a high maximum shutter speed, a metering range that can allow you to shoot pushed film, use of classic lenses – and added features that weren’t even added to the most sophisticated film cameras like the Nikon F6.

The rechargeable battery is another interesting addition – you can recharge the Reflex via a USB cable. No more searching for button cell batteries in downtown Ulan Ude or Monte Carlo (two such places where I’ve suddenly needed to find them). Not everywhere has a store with a range of batteries – virtually everywhere has a powerpoint you can plug something into.

“We can’t compete with something like an old FM2 on price. But that we can include all of the best parts of all our favourite cameras into one camera really validated the entire product for us. We didn’t want to just take a K1000 and put new technology into it,” Von Thomas told Casual Photophile.

Barely a week after the launch of the Reflex Kickstarter has come news of another film camera heading to market. This one however, seems much more familiar once you do a little digging.

The Ihagee Elbaflex was announced on The Phobolographer on 10 November, described as a new Nikon F-mount SLR created through a German-Ukrainian collaboration.

It’s the first camera to come from a Dresden, Germany based company called Ihagee, the name of the company that created one of the most innovative lines of 35mm SLRs – Exakta.

The camera’s spec sheet includes shutter speeds up to 1/500th, a flash-sync speed of 1/60th and, according to Phoblographer’s story, will be both affordable and be backed by a service centre based in Germany.

Details are reasonably scarce, at least until the Kickstarter launches, as are photos. In fact, the only one which shows the camera in any reasonable detail is one where it is half-shrouded in black material. But there’s enough to show what the Elbaflex really is – the Kiev 19M.

The Kiev 19M was one of the final SLRs made by the Arsenal planet in Kiev in the USSR, now the capital of the Ukraine. Instead of the M42-mount used by Zenits, or the unique Kiev-made bayonet mount in the Kiev-10 and -15, the 19M used a Nikon mount. Arsenal made a range of lenses for their Nikon-mount range of SLRS (which also included the 17, 19 and 20), including an Arsat 50/2 which came as standard, and a Kaleinar 100/2.8 which has an excellent reputation.

The Kiev 19M kit came with a plastic grip which could be screwed onto the front of the camera and the Elbaflex seems to sport a wooden model in the photo – another hint at what this camera really is under the new name.

The biggest weakness with the Kiev 19M was its unreliable metering – I’ve owned two, and both had meters that were wildly off the mark. It was a common quibble. If the Elbaflex is indeed a 19M with some tweaks and a new name, let’s hope that the metering has been completely redesigned. The 19M was a decent design matched with some fantastic lenses – it was a shame that it came out at a time when the USSR’s quality control was less than impressive.

“Pictures taken with Elbaflex are images full of contrast, natural and timeless, especially when shot in black and white. The difference to digital is an increase in charm, depth and elegance in your images,” writes Ihagee on its website. I’ve certainly enjoyed results from the Kiev 19M, especially shooting in autumn sunlght – the Arsat 50mm lens is capable of some wonderful colour rendition, as can be seen in the pictures above.

If the Elbaflex takes off, could some other designs from the Soviet era be given a new lease of life?

Not to mention the PONF Multiback Open Camera Project. They are developing a reflex camera with interchangeable digital and film backs. The digital back has full-frame (or APS-C) Sony sensors and is based on a Linux OS controlling a Raspberry Pi Compute Module, being a true computer and not only a digital camera. The film back is a 35 mm one.
http://www.ponfcamera.com

This so-called Ihagee Elbaflex is a revamped 1988 Kiev 19M camera without any light meter and with a wooden grip replacing the original plastic one. 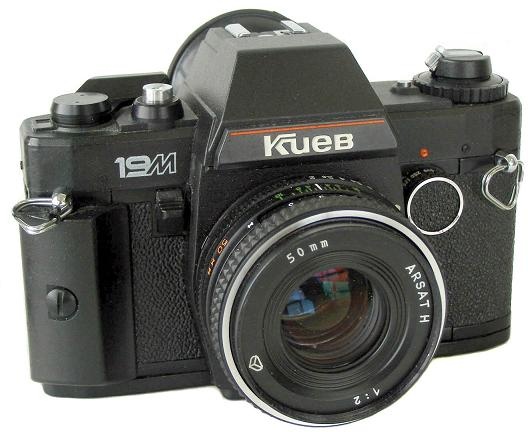 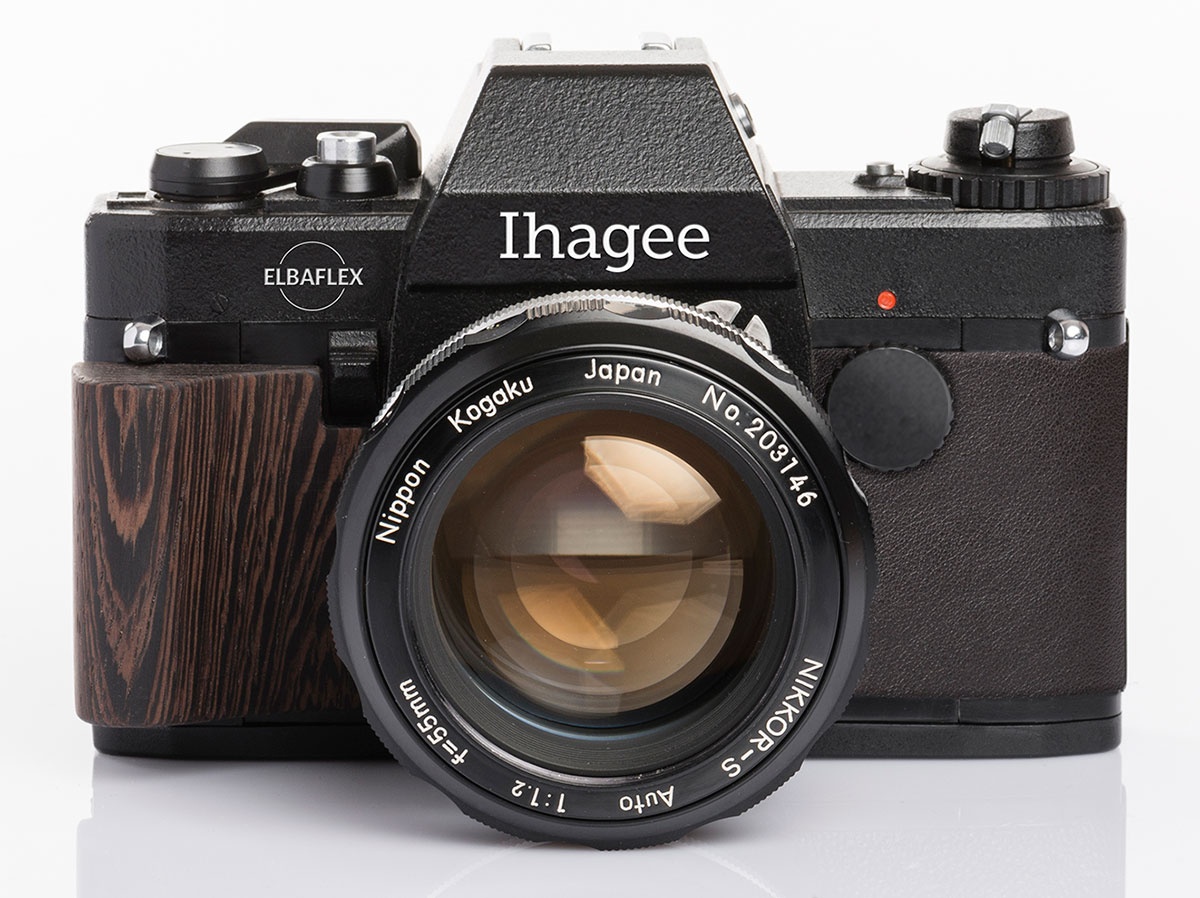 The people behind the project are the net SE group. They also resurrected the Meyer-Optik Görlitz and Oprema Jena brands and the Emil Busch Anastigmat lens. Crowd-funding platforms such as Kickstarter and Indiegogo are among their favourite marketing tools.

Well, they did redesign the metering on the Kiev, in a way – by removing it entirely.

For what it’s worth, I’m interested in how well the removable backs on the Reflex will be designed – seems a good way to make the camera to feel more flimsy than necessary. Hopefully I’ll be pleasantly surprised.

The so-called Ihagee Elbaflex is indeed a revamped 1988 Kiev 19M camera (Arsenal factory, Kiev, Ukraine, then Soviet Union) without its light meter and with a wooden grip replacing the original plastic one.

This is admitted by the Ihagee people themselves, see the Comments section of the Kickstarter project:

“So, yes: the design is based on the Kiev 19M but you are getting a brand new camera with a guarantee.”