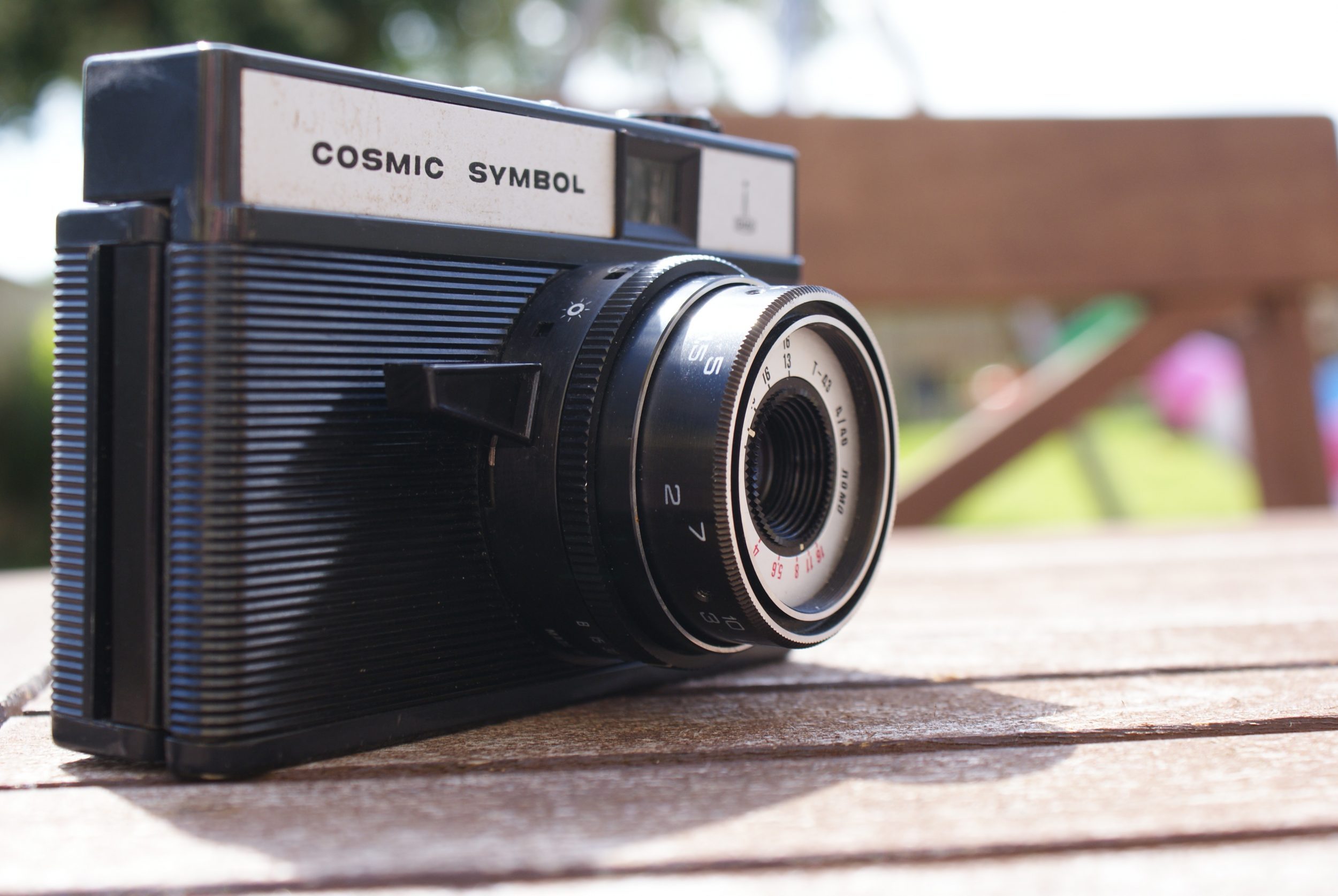 Home Analogue History The humble Soviet camera that made it to the top of Mt...
KF article top

On 29 May 1953, New Zealand mountaineer Edmund Hillary and Nepalese Sherpa Tenzing Norgay wrestled their way to the top of Mt Everest after an arduous two-day climb from their expedition camp.

They were the first climbers to officially reach the top of the world’s highest mountain, and the news of their triumph – as part of a British expedition – was announced as a coronation present for Britain’s new queen, Elizabeth II. The two climbers instantly became household names across the world.

The pair spent 15 minutes on the summit, and Hillary – a keen photographer – captured their success on his camera a Kodak Retina Type 118. His pictures included a shot of Tenzing posing with his pickaxe on the roof of the world. Hillary, an oddly shy man despite his prowess as a high-altitude mountaineer, declined to have his picture taken. Like Neil Armstrong on the Moon, there is no image of the man that got there first.

Hillary and Norgay’s successful summit opened the floodgates. To date, nearly 4,500 have climbed the 29,029ft-high (8.8km) mountain, most of them along the Nepalese route. More than 800 of them reached the summit in 2018 alone.

Many of those mountaineers took a camera with them to record their peerless view across the Himalayas. And some of them proved that you didn’t have to lug a Leica (or even a Retina) with you to capture the view from Everest.

In May 1982, nearly 30 years after Hillary and Tenzing had first climbed it, a team of Soviet climbers travelled to Nepal to face the Everest Challenge. The team and their support crew took with them a large array of Soviet stills and cine-film gear. Soviet magazine Technointorg reported later in 1983 that it was “the toughest test Soviet photo and cine cameras had ever been put to”.

Two of the climbers, Vladimir Balyberdin and Eduard Myslovsky, made it to the top of Everest on 5 May 1982, accompanied by a team of nine other climbers. Along from the wealth of gear needed to keep the team alive, they brought with them an array of LOMO cameras to document their climb: a Lubitel 166U medium format camera, a spring-driven LOMO 135M and no less than five Smena Symbol viewfinder cameras, aswell as a 16mm Krasnogorsk cine camera.

The team was accompanied by a small group of Soviet film-makers who made a documentary on the expedition, led by director Valentin Vendelovsky. He told Technointorg: “At an altitude of over 5,600m, the shooting was carried on by the climbers themselves, who had started preparing for it only a short time before the ascent.

“None of them had done any movie-making before; consequently, their cameras had to be very simple to use while guaranteeing good results.”

The magazine page here shows a number of images taken on the team’s Smena Symbol. The Smena Symbol was one of a vast number of simple viewfinder cameras made by LOMO from the 1940s all the way up to the 1990s. Most of them had a glass Triplet 40mm f4 lens very similar to the one used on its bigger brother, the Lubitel. The Smenas were mostly made of plastic, and were designed to be easy to use and very cheap to produce; the Smena 8 and 8M were built to the tune of around 21 million. There’s no kind of focusing aid in any of the Smena family’s viewfinders, nor is there any kind of electronic or selenium lightmeter. The Symbol, however, does offer an alternative; an exposure calculator based on ISO and weather symbols. Match your ISO to the current weather conditions and it will recommend a shutter speed and aperture via the cartoon symbols. And you know what? It works.

“Its plastic body is very strong: hard knocks against sheer rock during a vertical climb left it intact – and the shutter in perfect working order.”

Kovalenko had special praise for the camera’s lens. “On brilliant sunny days when we had to keep or dark glasses on all the time lest we get blinded by the dazzling ice and snow, light diffusion in the camera was minimal.”

The Smena Symbol, it should be noted, was not exactly a camera made for this kind of work – it was supposed to be a cheap and cheerful camera for family gatherings and holidays, much like Kodak’s Instamatic range.

However, the Symbols had undergone one major modification before their Everest mission. Kovalenko explained: “We replaced factory grease with that resistant to cold, of course, and made lightweight capron carrying cases for our cameras.” In such intense cold, the normal lubricants used in cameras would have seized up, making them impossible to use.

It’s not known what happened to the five Everest-conquering cameras after the team returned to the Soviet Union, but LOMO certainly weren’t shy in telling the world their cameras were tough enough to conquer Everest. The Symbol, in any rate, was a very successful camera – more than 4.1 million were made, and production was only halted in 1993. 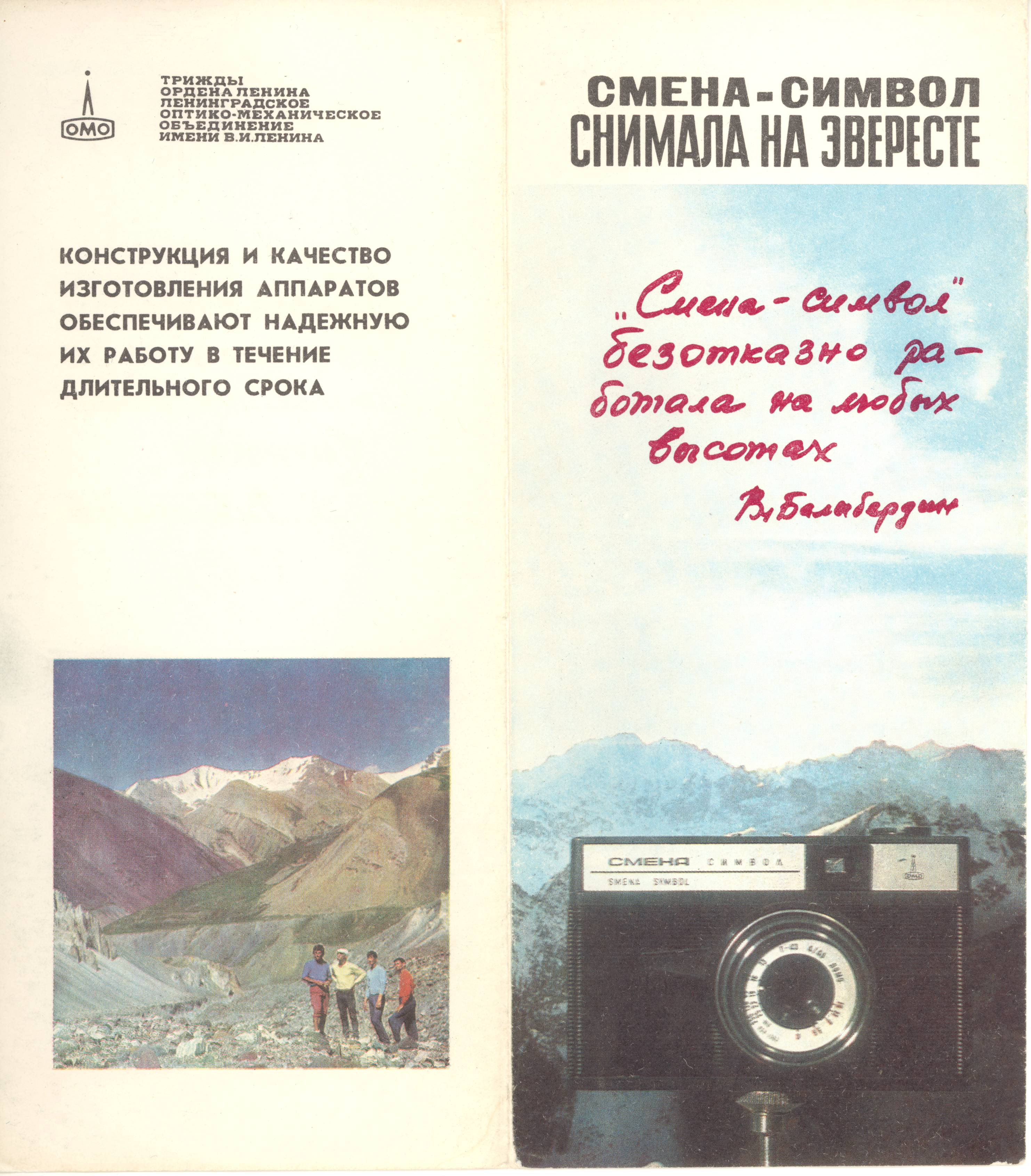 Kosmo Foto was shared a scan of this Russian-language pamphlet above about the Smena Symbol. LOMO released the brochure after the successful climb, including some of the images taken by the team in Nepal, and a portrait of one of their Symbols with a Himalayan backdrop. This example, which lives in LOMO’s private museum in St Petersburg, is signed by Balyberdin himself.

I call bs in the “first” thing. We’re expected to believe that the first people who surmounted a mountain in Asia are white?

Well, only one was a non-Nepalese white man – and it was the first “official” successful summit. There’s also speculation that George Mallory might have got there earlier and died on the way down. Yep, Sherpas may have got there, or it could have been too much even for them without supplemental oxygen.

Mountaineering is a relatively recent hobby. I see no reason to doubt Tenzing, an Asian and Hilary weren’t the first to reach the summit. Theirs is certainly the first verified successful expedition. Why do you doubt it? Do you have evidence of an earlier one?

I think its just the year to rewrite [refocus? [pun intended]] history..
very interesting article BTW. Together with the comments about Apollo missions below, I’d love to see an article on Pentacon cameras in Space at some point (Esp the EE2).

I really enjoyed this article. One small correction however. There are a handful of images of Armstrong on the moon taken by Aldrin but you’d have to be an ultra nerd to know that. I’ve a thing for the Apollo missions. The iconic shot of Aldrin is my favourite ever photograph. It is somewhat redolent of the Tenzing picture to which you refer, a great analogy.

Edmund Hillary wasn’t “oddly shy”. He was just a humble man who didn’t like much fuss made of him or his achievements – a very common attitude amongst kiwi men of his generation.