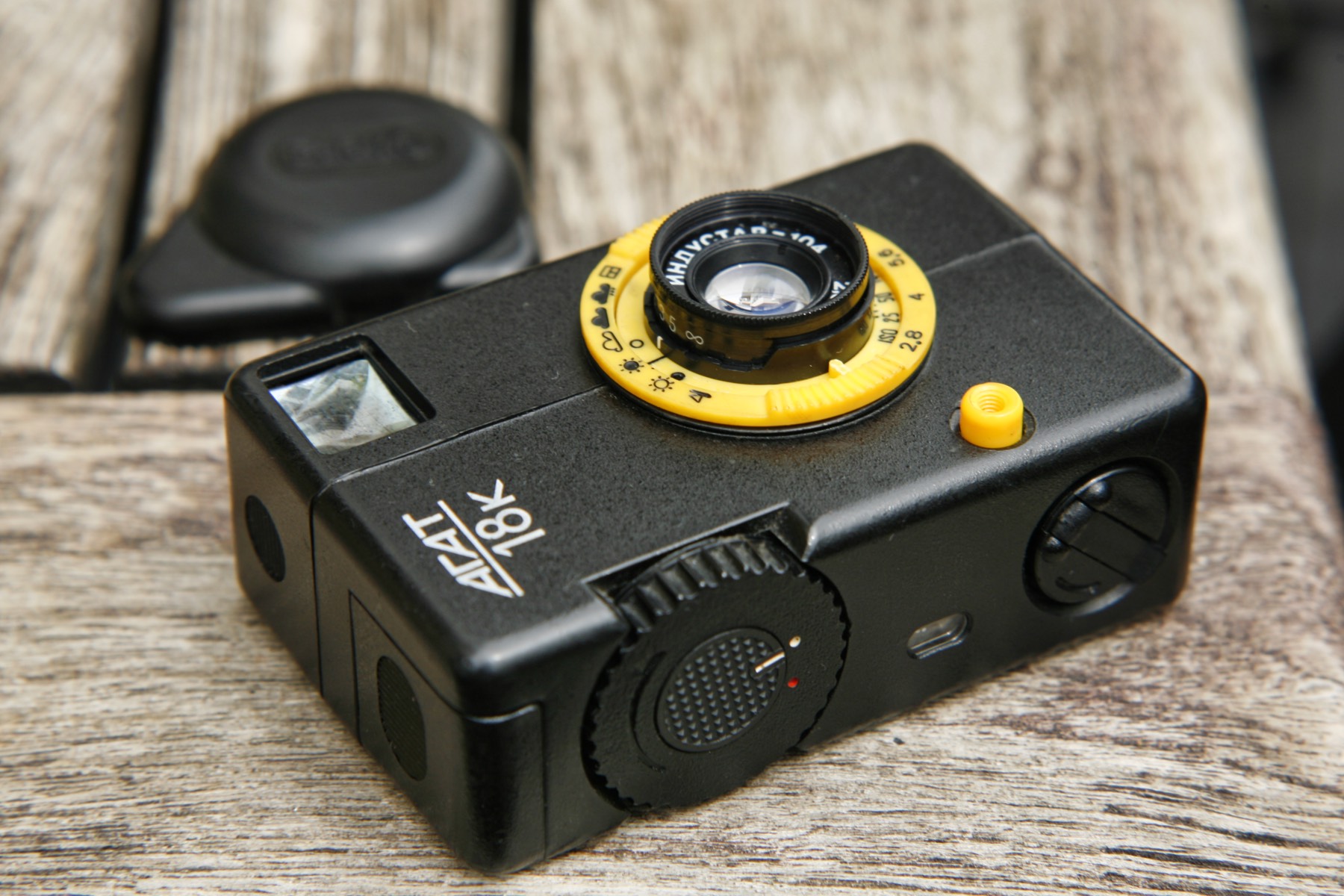 My case in point is the Agat 18k, a small plastic camera that I got from an antiques dealer many years ago. The guy who had it didn’t quite know what it was, so he offered it for free if I could figure out how it worked.

Back then the Agat was also new to me, but it was pretty clear that this creaky black box, with its bright yellow moving parts, was the quirkiest, most lo-tech camera I’ve ever seen. Produced around the late 80s in the ex-Soviet state of Belarus, it was the lowest-budget model in a line of cameras produced by the belOMO brand.

Not surprisingly, the 119g thing looks like a toy. It’s far from a beginner’s tool, though, as it packs all-manual controls that can give even seasoned pros a pause. And despite not having battery power of any kind, it boasts a nifty analogue calculator that helps you get the right exposure, focus and even depth of field.

Best of all it shoots in half-frame, which stretches a regular 36-exposure 135 film roll into 72 frames. My unit came with a mere pouch and a lens cap, so I had to google this camera intensively for a few nights.

Despite warnings of questionable quality (light leaks and rough film advance are a common complaint), my Agat 18k worked properly from the start. It still does today – although I always need a minute to reorient myself to its controls, every time I take it out for a spin. 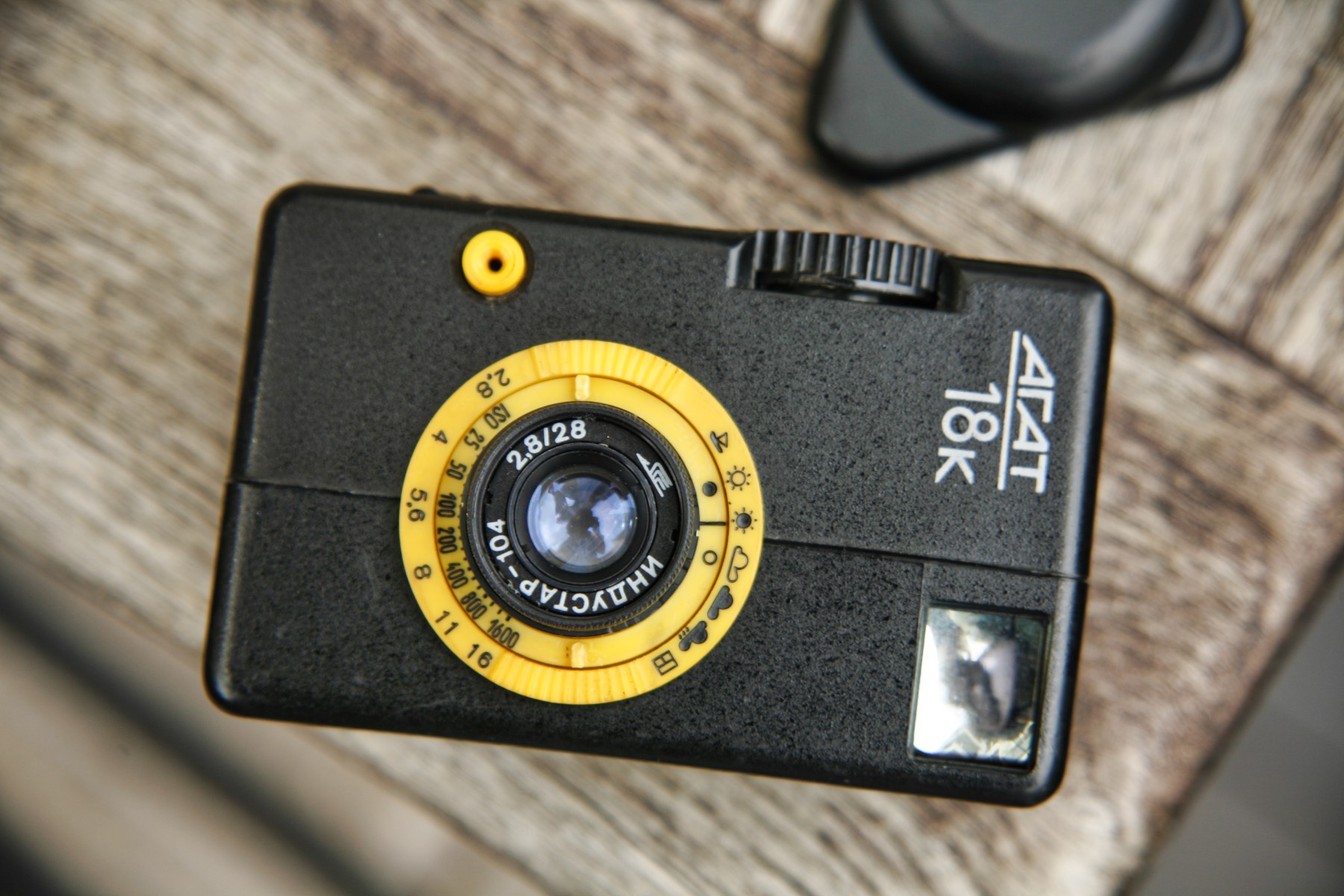 This camera requires a peculiar three-fingered hold to detach its bottom half so the film can be loaded. The 35mm roll is hooked onto a removable take-up spool so you can place it into the top half. Then you very carefully snap the bottom half back in. Yes it’s a tad complicated, but get past the film loading process and everything else becomes (relatively) simpler.

Next comes the Agat’s exposure system – a curiously designed mechanism that puts all the information and controls into two rotating rings. To get it up to speed (pun intended), you must align your effective ISO to the film speed markings printed on the inner ring. Doing this will “calibrate” the aperture settings on the outer ring, so that choosing the relevant Sunny 16 symbol will give you the right exposure for the scene. I have no idea how the shutter speed plays into any of this, but the camera manages to get a decent exposure in most outdoor situations.

There’s also the focusing process, which is requires a bit more thought than the usual scale focusing technique. You need to align the minimum and maximum focus distance markings along a set of ridges on the side of the lens. The ridges stand for each aperture step – that’s f2.8 to f11 in full stops. None of these numbers are indicated, btw, so better memorise your f-stops!  It’s not a problem when shooting outdoors due to the small apertures’ DOF. But you’ll need to really stop and look hard indoors to make sure your depth-of-field covers the subject.

Now wipe off that mini-nosebleed and you’re ready to take the picture. The most straightforward part of this whole exercise is pressing the shutter button and winding the film!

As you might already suspect, the Agat 18k isn’t a camera I’d recommend to newbies or casual shooters. In fact, making them use one of these might even discourage them from film. However there’s a delightfully imperfect, nostalgic quality to the output – which is exactly what I want from a creaky plastic three-decades-old manual camera. Having said this, its scale focusing system is so prone to human error (sometimes I completely forget to even set focus) that it’s easy to end up with a blurred shot.

The Agat 18k is a snapshooter’s camera with a fair degree of unpredictability. No doubt this thing is complicated to use, but I love how it forces me to slow down and do the math, so to speak, for every picture I take. Throughout the years I’ve kept a colour-print-film-loaded Agat on my table and sometimes inside my camera bag, to be fiddled with whenever a photo-opportunity arose. It has become a personal notebook of sorts; a visual diary which I use to capture little things I deem too trivial for a serious camera.

It takes me several months to even a year to finish all 72 shots. Nevertheless, I am often delighted when I finally see the images long after I captured them. The negatives are sometimes scratched and the grain is always visible. Some pics are badly exposed, others are tinged with massive flare (a characteristic of its 28mm Industar optic) or some weird colour cast.

But the sights, sounds, smells of these forgotten moments all come rushing back, the way photos used to do when they returned from the corner photolab. There’s that pic of my wife and our toddler walking to the neighbourhood sundry shop, or that busy main street in an old town which I once passed through, or that battered bike leaning on a weathered wall, or that stroll down an empty beach, eons ago.

They’re nothing like the technically perfect digital images we’re so used to seeing – but boy do they all look and feel like real memories.

I used it when I was a teenager and loved it. It provided possibility to take camera with you to everywhere just in your pocket (like mobile phone today). All the other cameras were much bigger and heavier. Connected with small flashlight, it worked in darkness as well. And it saved film (72 frames!), quite important in Soviet times!

Nice series of captures. Russian cameras are a treat and a challenge. Also, sharpness is overrated.

I agree – in these era of auto-everything cameras, its nice to do the thinking when shooting.

I’ve been after a half frame for a while now. Would be nice to have something a bit unusual such as the Agat to have to think 1st before the point and shoot bit. Nice images Lester.

Thanks Andy. I’d say the lo-fi look if the Agat is well worth the trouble of shooting with it 👍