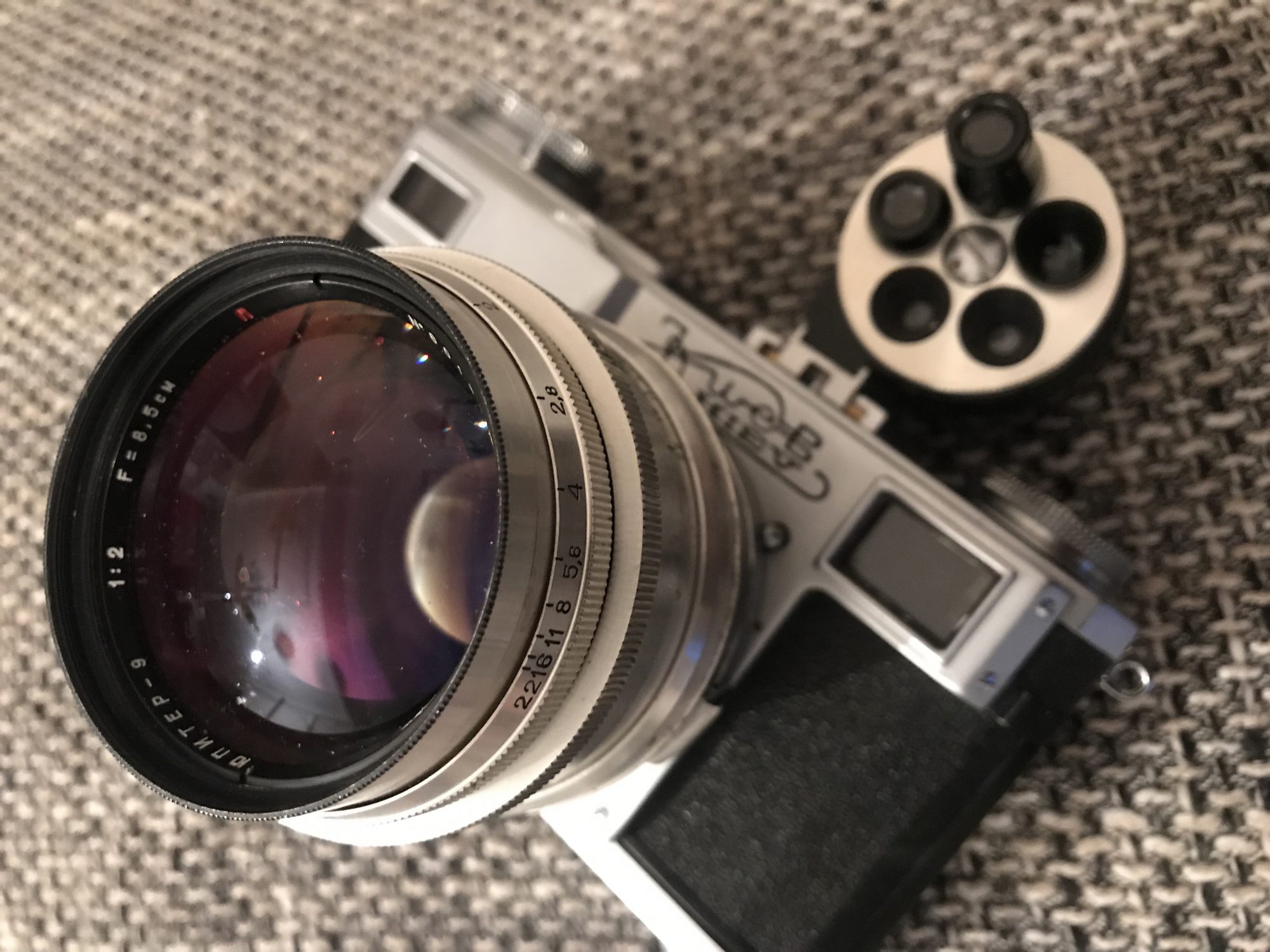 He originally got in touch when I announced the ‘Around the World in 80 Cameras’ series, and I added him to the list for two reasons – the first because he lives in Almaty in Kazakhstan, and secondly because his shortlist of cameras for the project were all Soviet ones.

As you might have guessed by now, that’s definitely one way to get my attention.

The 80 Cameras project has got off to a slow start, but in the last year Andrey has written a bunch of fantastic posts for Kosmo Foto, from his tips to make 16mm film from a roll of 35mm to his experiences with the KMZ Narciss – the world’s smallest SLR – and restoring his grandfather’s Lubitel medium format camera. Even more impressive was his story about spending two weeks in a Covid ward in Almaty after developing pneumonia – with pictures taken on his old Soviet Chaika half-frame camera.

In the wake of the Soviet camera guide published on the blog at the beginning of 2021, I asked Andrey – who has a collection of weird and wonderful Soviet cameras – his thoughts about the designs from the days of the USSR, and which ones he’d recommend for those interested in shooting with them.

What is your experience with Soviet cameras?
“Well, I was lucky to get that experience at the age of three, when was gifted with a Smena-2 by my grandpa. I found that a two-kopek coin fits the lens diameter pretty well, especially when tightened with plasticine. So I was pretty much happy those days. Seriously I got deeper into that at the university times, with another my grandpa’s camera: Zenit-3M, that I fully disassembled trying to clean the viewfinder. That time I got no choice but to assemble it back. I had the wonderful Maizenberg book [on camera repair] and succeeded with it. So I actually started to use it, understanding all the strong and weak points of Zenits.

“Unfortunately, the camera was stolen soon after. There were many other cases for sure, good and bad. For example, my parents’ Vilia Auto never worked properly right from the shop, and I fixed and restored it only last year.”

How did you get into them?
“Well, I have always been amazed with the magic of photography, every step of that: fixing moments, developing the film, printing. I saw it all from my childhood and always wanted to get into it. Those times we did not have much choices about cameras selection. So I used Zenits, Zorkis, Kievs, Lubitel and by the time our market was filled with Kodak’s plastic-fantastics (soap-dishes as we called them because of the shape), I realised the difference and that Soviet cameras are pretty strong first choice of mine.

“And that was until I got my first Canon, an EOS 300. Of course it was better than my Zenit-122. I did not quit collecting Soviet cameras though, mainly for fixing them, not shooting with. I switched from science to advertising at that time and work was pretty stressful. Fixing cameras, understanding them, bringing them back to life, became my psychotherapy for years.”

Was it the affordability? The fact they were cheaper than Western cameras?
“Pretty much indeed. In the 1990s they cost almost nothing, if not for free, as all switched to Western cameras. It was also the pretty wide range of them which also sparked my interest. I couldn’t afford several Nikons or Canons, but plenty of Zenits, Feds and Zorkis. And unlike other countries we almost did not have a secondhand market of Western cameras – they cost almost as much as new.”

Did they fall out of favour in the ex-USSR? People wanting to shoot with Japanese cameras as soon as they could afford them?
“Absolutely. it wasn’t Japanese at first: in the mid 90s Kodak came into the market with films, labs and cameras – a full line. It was a great marketing strategy and it worked like a tsunami. People switched from Soviet cameras in about six months. Most reasons were the bright colours of photos from Kodak labs. If the photos are so good, then cameras are great as well, that’s how people thought.

“And they also looked like alien technologies: small, shiny, motorised, with autoexposure and autofocus. Most people bought them for that reason of course. Thinking about it now I realise that those were cheap plastic cameras with plastic lens, one speed and slow apertures. But boy, they had flashes! And they were a part of an infrastructure. You could use Zenits with Kodak films of course, but nobody wanted that actually. We wanted to be a part of the West.”

Which cameras are your favourite?
“To me there are three levels of that: nostalgic, engineering, and uniqueness. And it’s truly hard to choose one over the other, so I don’t.

“Nostalgic are Zenit-3M and Lubitel-166 that my grandpa used, Vilia Auto and Elikon Autofocus that my father used. They all been broken by me one day and all been fixed now. They are really good cameras the way they were meant to be.

“Engineering is definitely the simple Zenit line. Every Zenit was kind of evolutionary perfect, and, in many cases, even revolutionary. Regardless its limitations and sometimes bad construction quality those cameras are apotheosis of the idea of camera for the masses. SLRs, great interchangeable optics with reasonable range (most people used the standard Helios anyway), hard-to-break even without reading the manuals, no needs to carefully store it, even for decades. And especially the E and ET lines, no need for batteries. And all this for an affordable price.

“So Smena was a camera for kids mostly. Zorkis and Kievs for advanced photographers, and Zenits were for the masses. Here it is important to understand what we mean by the ‘masses’ in the Soviet reality: masses of engineers, workers, travellers, scientists and so on. Skilled and educated people. It may sounds strange, but the Zenit-E and ET were the equivalent of the Olympus Trip 35 in the West, just a camera to go anywhere with.

“And uniqueness, yes. Interesting thing is that here we, like in the West, didn’t know much about the whole selection of Soviet cameras. We knew basic models mostly: Smena (for the kids), Zorkis and FEDs (a gift when you graduated school), Kiev (cool camera but complex, those for experts), Zenit (oh, now you a father of family) and Drug, Narciss, Leningrad (mythological cameras that once existed but no-one ever saw). For latest year I found more about latest once. Truly great but failed attempt to create something unusual and original. They are really favourite in terms of collecting and investigating and, of course, maintaining.

“Pretty much been written here but telling the story short, for shooting I’d choose Zenit-ET. Or Zorki-4. Or Kiev II. Or FED… oh God, why did the  Soviets make so many great cameras!”

What are your tips regards using them?
“First of all camera has to be serviced. Completely reassembled, re-lubed and readjusted, rubber shutters are best replaced with new. Second, all Soviet cameras require gentle treatment and care. Every manual of Soviet camera started with words: ‘Dear customer, your camera is a complex device.’ And they really are. So one should treat it that way.

“Here is pretty much the same as with any mechanical device, whether it’s Leica, Smena, or father’s watches. Read the manual first, before use them, keep in a clean and dry place, don’t put too much force to it. Treat it gently, service it properly and camera will pay you back with lifetime of perfect working.”

Why do you think they have a bad reputation? Is it unfair?
“Yes and no. yes because there were huge quality issues with Soviet cameras indeed. Not because most of them were fine, and 90% issues were pretty easy to fix, but service was poor and sometimes expensive and unreliable. So people did not care much about them why, if camera is no longer under warranty, just go and buy another camera. Or just put it on a shelf and forget about it for good.

“Of course there were cameras that never worked well, like Kievs SLRs, some complex Zenits etc, but they did not stand of production for long, because people did not buy them. Who said we never got a market response? As many have mentioned, and that’s my strong point, that Soviet cameras themselves are great, simple but they do what they should for years – bad Soviet service and poor treatment spoiled the reputation the most, not the engineering production.

“If Leicas were treated the way Zorkis were, they’d have almost the same reputation.”

Which models do you recommend for those curious about using Soviet cameras?
“I’d recommend to start with simple-advanced cameras: Zenit-E or ET from SLRs, Zorki-4 or FED-2 rangefinders. Yes, Zorki-4 is not that simple camera, but just nice one.”

“The latter choice should base on the experience using them. Of course, Kiev rangefinders are great, as well as first Zorkis. Some compact cameras are truly nice like the FED Micron, half-frame Chaikas and Agats and so on. There are so many interesting models yet to be discovered widely!

“And of course, they should be properly serviced if one want to enjoy using them. If not, there is also an exciting way to get deeper – by trying to maintain them.”

Is their reputation gradually getting better as more people use them?
“It really is, because we got information now, we have proper tools and materials to fix them and finally we have the possibility of proper servicing for them. And yes, they show their best more than in Soviet times. I see many examples from around the world, when people get serviced Soviet cameras and start to use them and say: ‘Hey, they are not that bad at all! For that price they are even great!’ Also, using Soviet optics on digital cameras gains interest to cameras too.”

Are people in your part of the world rediscovering them?
“Well, I’m trying to make it come faster. Many film enthusiasts here are asking about Soviet cameras now, some try to shoot with them and enjoy the results. But here I’d say, we are again years after the West. Who really rediscovered them in a best way are sellers – prices rising high every day but sadly not for serviced cameras. But I have a strong belief that it will change pretty soon, regarding the dynamics of our local market.”

I had a Kiev long time ago. I loved it but I couldn’t find a person or company who could accept the camera for repair or even CLA. By that reason, I had to let it go for a song.
If I had repair and CLA person or company, it would have been my go-to camera.