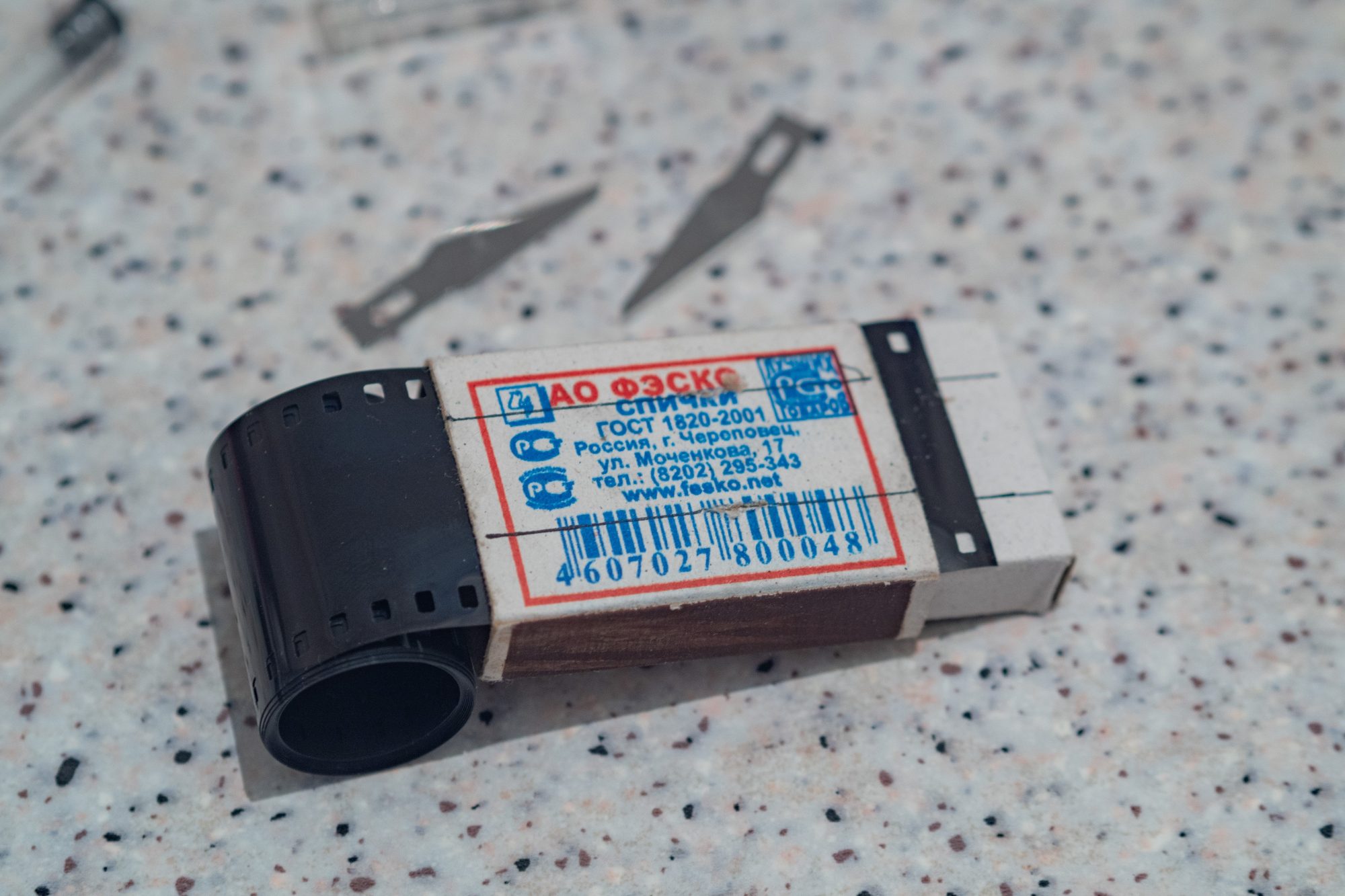 What if you have a 16 mm camera and want to shoot with it? Join the club. I recently fixed my old Narciss camera, which is a particularly beautiful specimen from the Soviet and, one of the smallest SLRs ever made. When I managed to get the camera to work as new I decided to give it a spin.

There are, of course, many 16 mm cameras that have been produced, like, for example, Kiev Vega, the various Minox models and many others. Some are really expensive but many are not at all. But all of them share one feature – they are tiny and easily can be carried in a pocket.

But what to do, if you have such a camera but don’t have 16mm film? Well, surprisingly it’s very easy to make one from a regular 35 mm film at home for about in 10 minutes. This trick was once published in a Soviet magazine in a DIY column. Unlike much of the advice published there, this one actually works in real life!

What you will need is a roll of 35mm film, a regular matchbox, a ruler, and two razor blades from a craft knife. Simple as that. Obviously, because you are cutting unprocessed film, this operation will have to take place in complete darkness, but it’s best to practice it a few times with some sacrificial film so you can be confident you can do it in the dark.

First, you will see that width of matchbox perfectly fits the width of 35mm film. I used a regular matchbox but also found that some hotel matchboxes also have the same width and a good to use. What you will need to do is measure 15 or 16mm (I use about 15mm so the film won’t get stuck in the camera occasionally) in the middle of the end of a  a matchbox, and draw two parallel lines along the length of the matchbox, on both the top and bottom of the box.

After that you need to use a razor blade to make two cuts on a bottom of the matchbox, and two cuts on the upper side. Cuts should be 16mms apart, tracing along those lines you have drawn on the top and bottom of the box.

Then, insert the razors inside the cuts you have just made, placing them diagonally and with the sharp side facing up up, as it’s shown on the photo. Now, remove the razors for a while.

Next, insert your roll of 35mm film into the matchbox and pass the film through so the end of the film can be held in your fingers. I think it doesn’t really matter what side of the film will be on top, but I roll it through with the emulsion side facing down.

Ok, now you’re almost done! Now, insert two razor blades into the cuts so they will cut and cut and pass through the film (as I said earlier, you want to insert them so that them diagonally, with the sharp side facing towards the end of the box where the film is being fed through).

And now just pull the end of the film, gently but evenly and with a slight force, so the whole film passes through the razors. And there you are: a nice roll of 16mm film!

What length of film should you use? Well, I made used about 45cm (18in) of 35mm film and it fit the 16mm cassette that came with the camera pretty well. It ended up giving me about 17 useable frames.