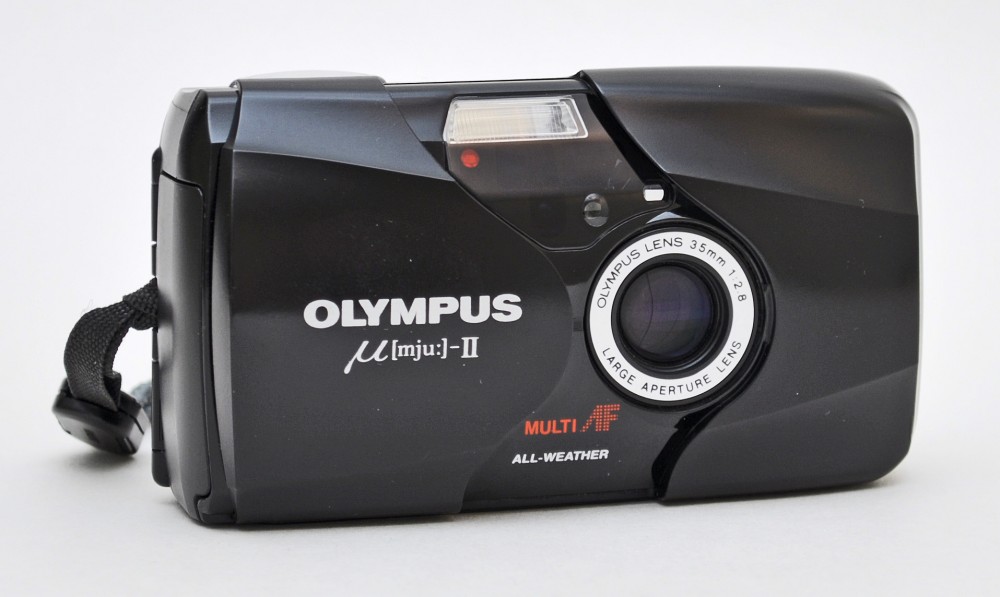 You either ‘get’ the Mju-II, or you don’t. If you don’t, you might compare it unfavourably to your SLR, or to a more premium metal-bodied compact. Another often bemoaned point is the lack of flash override. Sure, you can switch the flash off, but as soon as you close the clamshell cover, which switches the camera off, it forgets.

Although I personally have a deep and unrelenting love for the Mju-II, I can give you some more flaws. The auto-exposure is heavily biased towards wide apertures and fast shutter speeds. Image quality will never be as good as, for example, an Olympus XA, where you have full control over the aperture and you can stop down a little.

With the Mju-II, with the lens wide open, vignetting is evident, and no lens is at its best wide open.

Nevertheless, given the choice to use just one camera for the rest of my life, I would probably pick the Mju-II. Why? Well, it’s simple really. No other camera offers the same combination of small size, sturdiness, competence and above all, speed.

The Mju-II is so small and light, you can have it dangle from your wrist all day long, and for someone who loves to make spontaneous snapshots under any and all conditions, this is a major plus.

Not only that, the real USP for me is that you can open the Mju-II with one hand and fire off a shot in the blink of an eye. Even in such a scenario, you will be pretty certain you will end up with a decent picture. The autofocus is fast and accurate and works in total darkness. Exposure is usually spot-on as well, even when using slide film. The much-maligned flash actually helps in desperate situations too. Stealthy it is not, but that only comes into play after you made the shot.

If you are not into speed, the Mju-II also works when you have some time to set everything up. I frequently used it from a tripod and because it will allow for long shutter speeds, which most AF compacts don’t, I got some excellent shots in dark situations this way.

Because it so small, people will not take you seriously and you will be allowed to make pictures where people with more impressive-looking cameras might not. Festivals, fairs, museums, social gatherings, concerts, business trips, holidays, my Mju-II has seen it all.

A few short years ago, nearly all film cameras were being discarded wholesale by the general population, including the Mju-II. I bought several at flea markets for as little as 2 euros a piece back then. They all worked when I bought them, but in the meantime they all have died.

The only remaining Mju-II in my collection is my original one, bought way back in 2001. It still works perfectly, but it suffers from light leaks coming from the seal around the lens. Unfortunately, no-one is able or willing to fix this, since the Mju-II is so small and densely packed. I might try my luck finding another one, but I have not much faith in finding one that will remain working.

And, as many of you have noticed, prices for the better class of film point-and-shoots have exploded. It is not unusual these days to see mint Mju-II’s advertised for close to 200 euros (£178/$225).

Such is the hype surrounding the Mju-II that even its lesser siblings with a zoom lens are now going up in price. Although these are decent cameras, their slow zoom lenses simply cannot get in enough light to make them as versatile as the 35mm f2.8 lens of the Mju-II. The original Mju-I has a f3.5 lens, which is rumoured to be a bit sharper, but I never have used one of those.

Currently I am without a usable Mju-II. It leaves a gap in my arsenal that no other camera can really fill. That I am not the only one with this sentiment is evidenced by a poll on change.org (now closed). Although a grand total of 744 supporters won’t impress Olympus very much, it offers a glimmer of hope that one day a new film-based compact will see the light of day.

If they used the Mju-II as a template and update it with USB recharging and an app to change things like flash, ISO and exposure compensation, I will be the first in line.