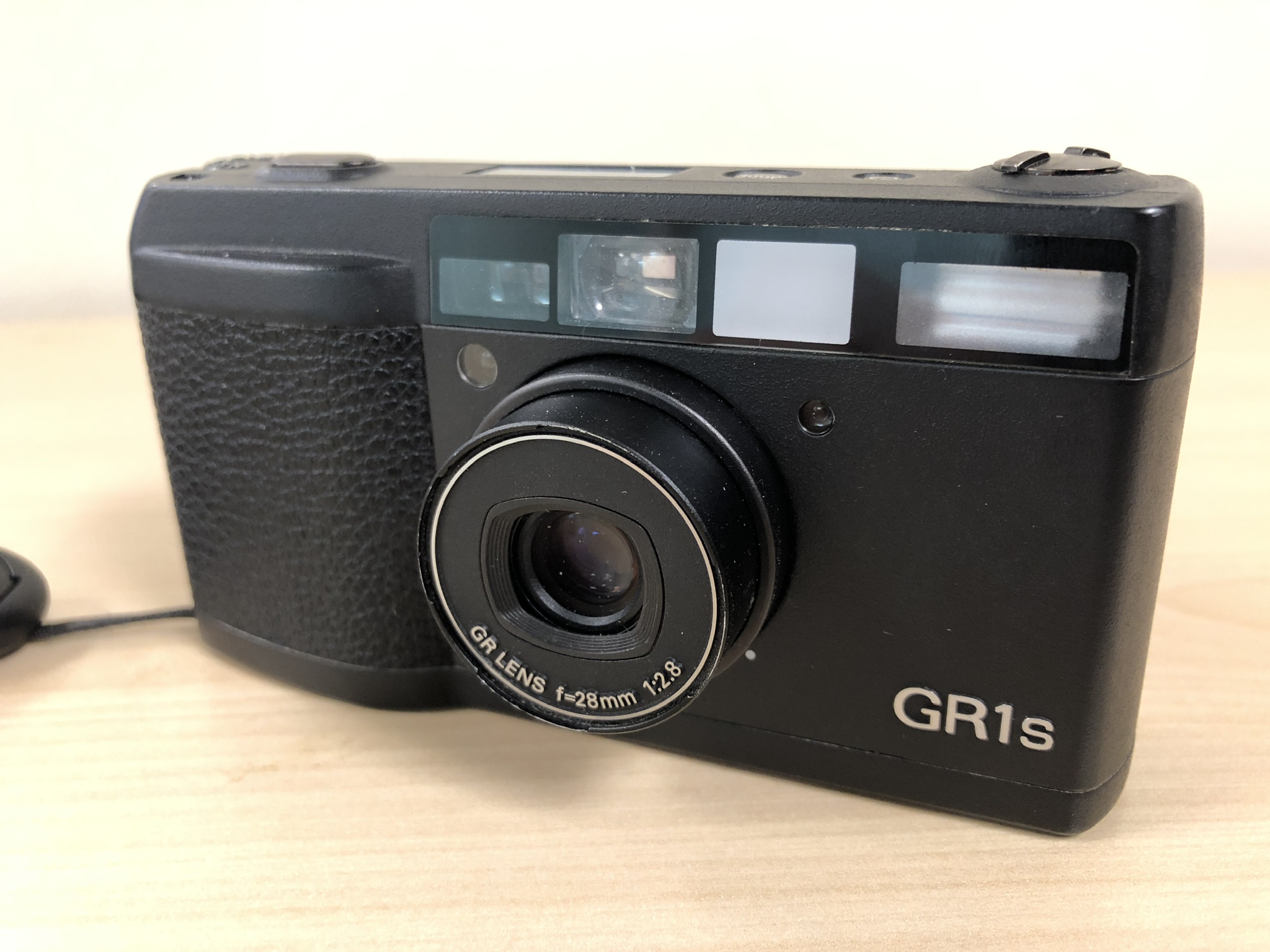 The Ricoh GR1s is a beautifully constructed camera; it’s incredibly compact for a compact. Its slim design goes to show that it was built with portability in mind. Not all compacts are actually compact, take for example the Contax T2; sure it’s a compact, but it’s not exactly a standard trouser pocket size, more of a coat or jacket pocket size, not to mention its fairly weighty for something supposedly compact.

The GR1s is actually the second in line of film GR series of film cameras. Building on its older brother the GR1 and sitting happily below it’s younger brothers the GR1v and GR21.

It’s got some great features over the GR1, but not quite as feature packed as the GR1v, although it sits at a much friendlier price point. I’ve seen the GR1S go on eBay in good condition for around £235 recently. Be aware that the LCD screen on these cameras are usually the first thing to go, however the camera will often outlive a defunct LCD screen.

The Ricoh GR1s is an autofocus compact camera sporting a 28mm f2.8 GR lens. It uses the same lens across the GR1, GR1s and GR1v line. It’s a pin-sharp lens and due to the GR1s’s portability and solid magnesium chassis it’s had a variety of applications both personally and in the workplace.

The focus on the 28mm lens is snappy, with a half-press the camera adjusts focus before taking the shot unlike cameras such as the Contax T2, a feature I much prefer as I like that tactile instant feedback. The lens is wide, it almost feels as wide as my LOMO LC-Wide at times, so it’s not to everyone’s liking.

It’d be nice to see a version of the same camera with something a bit narrower, maybe a 40mm like a Rollei 35, but I think that ship has long sailed, even if we dream that premium film compact manufacturing will return someday.

One thing to always bear in mind with a lot of high-end 35mm point-and-shoots is that they’re mostly electronic and that makes it harder to get serviced and repaired. Repairs can be expensive and if it outweighs the camera you’ve got yourself a brick, again at least it won’t weight as much as the Contax T2 which can practically be used as a doorstop in comparison! 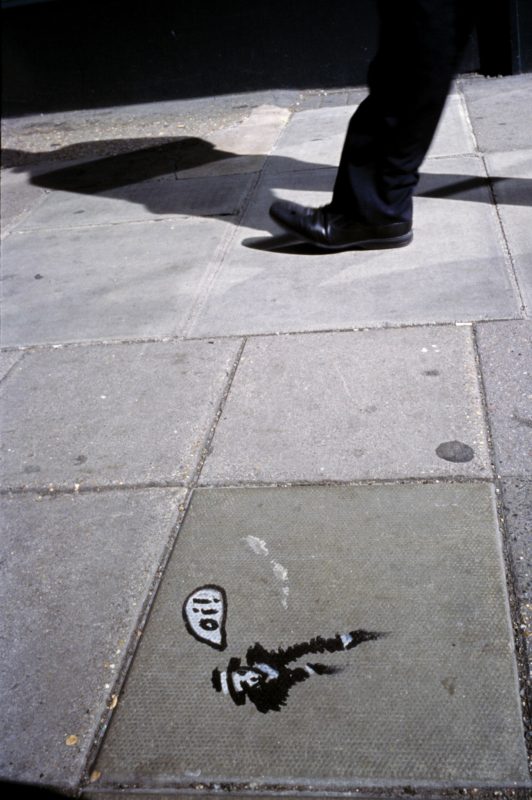 It weighs a measly 178g when compared to the T2 coming in at 295g. I compare to the T2 as generally the Ricoh GR film line and the Contax T line are considered two of the best 35mm compact cameras, although the Olympus Mju line might be a better comparison due to its slimmer profile.

The focus control has four key functions: Auto, Spot, Landscape and Snap. Auto allows you to snap away relying on the camera to choose your focal point. Spot allows you to select the area to focus and lock to that point whilst recomposing. Landscape, for shooting at infinity and finally Snap mode which gives you a one focus mode of around 2m (6.6ft), making this camera a great little street shooter. I tend to use the camera in Spot mode most of the time as relying on Auto can be a bit temperamental (although I’ve still found it better again than the T2 in this mode) and focus gives you that extra little bit of control over your shot.

The Ricoh GR1s is at the forefront an aperture-priority camera. The P mode on the right thumb wheel allows you to rely on the camera to set your aperture for you. In low light this isn’t always effective but works incredibly well in mid to daylight situations.

The key to effectively using this camera in low light is to manually set it to a wider aperture which at its widest is f2.8. You also have exposure compensation on the left hand side varying between +2 ev and -2 ev. Given the Ricoh GR1s relies upon DX codes on film canisters in order to set the ISO (film without a DX code defaults to ISO 100), having the exposure compensation is useful should you wish to push or pull your film.

I’ve recently been shooting Fuji C200 at -1.5ev in order to push the ISO 200 film to ISO 640. I’m still awaiting results on this but in theory it’s an entirely reasonable way to shoot at a higher ISO should the conditions require it. 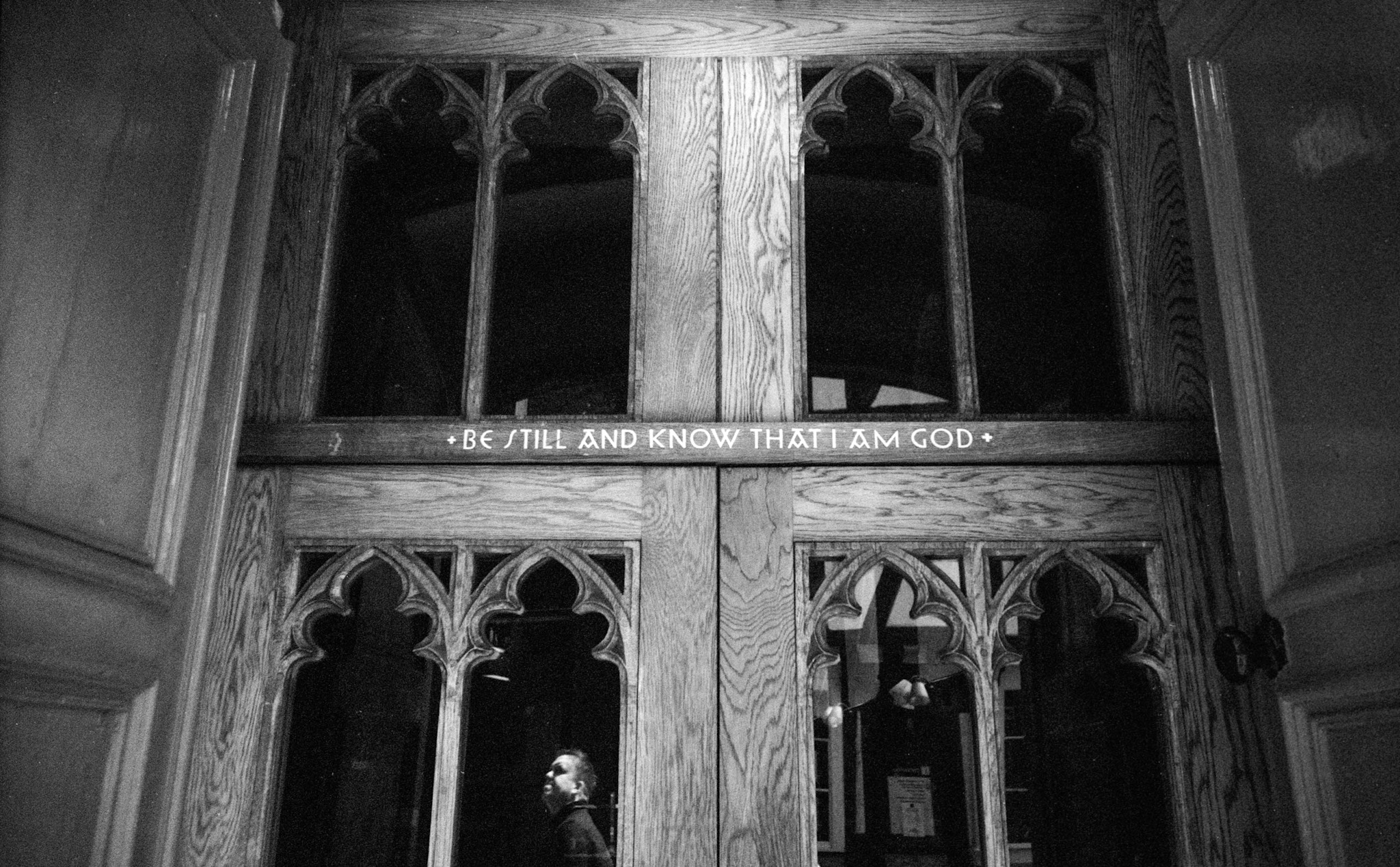 The flash function is pretty good, the T2 really shines on this front as the GR1S flash seems a little narrow and I’ve read a few reports stating that the bulb does have a tendency to blow after heavy usage. It’s not an awful fill-in flash, it just feels like the compactness of the camera has in turn effected the usefulness and quality of the flash.

Given I hardly use flash this isn’t a deal breaker given all the other useful features of this mighty minuscule camera.

Lastly, there is also a self timer function, this has two modes, Self Timer Mode and Timed Exposure Mode. Self Timer is the usual drill, wait 10 seconds and then your camera will release the shutter and take the photo. Timed Exposure allows the user to effectively shoot in Bulb mode, a great little feature for a compact, but then again if you’re using a compact camera you’ll likely not be carrying a tripod with you. 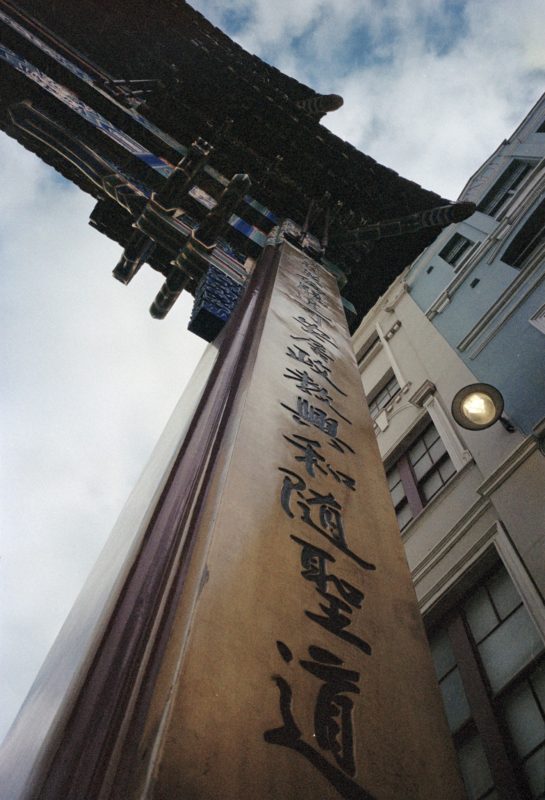 In conclusion the Ricoh GR1s and for that matter, the whole film GR series are powerhouses given their seriously compact stature. Sure I have my hang ups with this camera; the lens filter mount is a weird bayonet style making filters of this size hard to find, the viewfinder is a little dim and feels like its obstructed slightly by the plastic surround, specifically if you wear glasses.

Sure it’s a little noisy when taking a shot, you get that charming automated whir each time a shot is taken, but I can see why this would put some people off for street photography, however I feel the lens and focus features more than makes up for that.

All in all though I’ve found that it renders architecture shots beautifully, maybe it says something that this camera as designed for, possibly for taking on site photos of building and structures, the lens just seems to produce great pictures of lines and structural characteristics.

I love my GR1s. It’s the only compact I’ve kept. I love how it feels in the hand, I love how it shoots, I love how it rolls your entire film off the canister when you load it so that whatever you shoot the film is wound back into the canister meaning if you accidentally open the camera back, the shots you’ve taken are still safe. It’s a clever, well though-out little camera.

I personally would love to see a fresh crop of premium compact film cameras as I’m sure a lot of other film photographers would. If this market was to see some new models, you can guarantee the GR1s would certainly be a camera manufacturers would have looked to for inspiration.