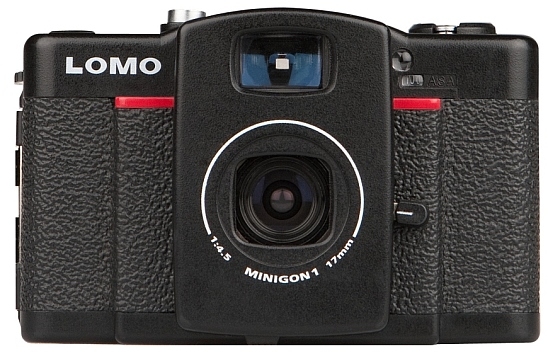 There would be no Lomography without the Lomo LC-A compact camera. When the Soviet-era Lomo optical plant decided to copy the Japanese Cosina CX-2 camera back in the early 1980s, they had no idea what a craze they would create in later decades. The humble Lomo LC-A, often given out to delegates at Communist Party congresses as a free gift, was destined to be remembered as a footnote in Soviet camera production. Instead, its discovery by Austrian art students in the early 1990s created an analogue photography craze. The LC-A’s production was restarted, and it spawned a new culture in analogue photography that is still vital and thriving in this now digital world.

The Lomo LC-A+, which was released in 2007, made some extra improvements to the basic Lomo LC-A; a higher ISO for using fast or pushed films, a cable-released thread in the shutter button, and a switch for shooting multiple exposures. It was a great update on the basic Lomo LC-A, but even more dramatic things were to come.

The Lomo LC-Wide was released in 2011, and gave the Lomo a wide-angle twist. The standard Lomo LC-A lens is a 32mm Minigon, which gives a pretty wide view of the world (it’s a great focal distance for street photography, for instance). The Lomo LC-Wide’s is 20mm – one that packs in a lot more of the world into the frame. Like its older stablemates it’s a zone focus camera – no focusing in the viewfinder, instead you move the lens to a preset focusing distance – but the LC-Wide has only two compared to the normal four, and its minimum focus distance is only a couple of feet; it’s a Lomo very much designed for the age of the selfie.

The LC-Wide also includes some extra tweaks on the inside of the camera – it allows special plastic frames to be inserted inbetween the film and the shutter; one reduces the frame down to 34mm by 24mm, creating a square format, while the other separates the frame into two 17mm by 24mm pictures – just like the old half-frame cameras of the 1960s and 70s. The LC-Wide has a half-format switch on the bottom of the camera that lets you take 72 pictures on a 36-frame roll of film.

The kind people at Lomography London gave me a Lomo LC-Wide back in 2012, and I wrote down some initial thoughts in the early days of the blog. Since then, the LC-Wide has seen a lot of use; it’s usually in my camera bag shooting on the weekend and it’s also been out and about on the road – most notably on a recent trip to Barcelona and Morocco.

Lomo cameras aren’t cheap by any stretch of the imagination – the LC-Wide costs a little over £300, and while this comes with a host of useful accessories, that’s money that can buy you a lot of analogue kit. But the LC-Wide is a very different beast to a lot of the plastic fantastic cameras – like the revived Holga and Diana cameras – sold under the Lomography banner. In some two-and-a-half years shooting, the LC-Wide has given me next to no problems.

In recent years Lomo production has moved from its original home in St Petersburg (formerly Leningrad) to China. There’s a definite difference in feel to the Chinese-made cameras compared to the original Lomos; I have a 1986 Lomo LC-A, and it’s a lot heavier and chunkier than the Lomo LC-Wide. That doesn’t mean the LC-Wide feels plasticky – far from it – but it does feel less substantial than an old-school Lomo.

The LC-Wide’s big plus point is the lens – it loses none of the characteristic vignetting that made the old Lomo such a favourite. Colours are rich and saturated, falling off into the characteristic darkening around the corners. It’s especially eye-popping when paired up with the right films – cross-processed slides, or Lomography’s own brand of print films, which seem especially saturated to make the most of the Lomo lens’s idiosyncracies.

That 17mm lens means the Lomo LC-Wide can take some sweeping landscape and street shots, but it’s also incredibly good for getting up close and personal – that minimum two-foot focus allows you to get much closer to the action than with many other cameras. For markets, souks, medinas, bazaars and cramped alleyways, the LC-Wide comes into its own; that distortion from the wide-angle can create eye-catching leading lines.

My only setback with the LC-Wide is entirely my own fault – I took it on a recent trip to Romania, but hadn’t changed the batteries – I forgot to click that the red battery light wasn’t showing in the viewfinder when I was depressing the shutter. The batteries had enough juice to properly expose a shot or two off each roll – if this wasn’t a lesson in remembering to check the batteries, I don’t know what was. But having put through at least 25 rolls through the LC-Wide, that’s only to be expected.

The Lomo LC-Wide isn’t something I’d recommend for occasional analogue photographers; that £300+ pricetag means this is a camera that needs to be used as much as possible to reward the initial outlay. If you want to sable with analogue photographer – head to eBay or a secondhand camera store and buy something for a lot less. If you’re determined that the Lomo-style of shooting is for you, then get the LC-Wide. And welcome to the club.

* Check out more pictures in the galleries, or in my Flickr set. Lomo stalwart Lomokev reviewed the LC-Wide on his blog, and you can read it here. Erik Tan’s comprehensive review of the camera is also well worth reading.

The picture at the top of the post is from icuresick on Lomography – do check out their Lomohome.

If you want to buy an LC-Wide, buy one online here – or pop in to the London store.

That is a good article on LC-W, i bought mine with a lot of discount without knowing much about it and its history except that I liked the photos other people take with it. After having used it a few times i’d say two things, it likes the crossed process and you have to get closer to the subject than you think.

Hey Diana, yes, getting closer is a good idea with the LC-W, especially becuase the minimum focusing distance is so short. It really rewards getting close in to the action.

Why would you not just buy a super wide lens?

That’s also an option. I find I do shoot differently using a Lomo – sometimes I’ll get results I just wouldn’t with an SLR.