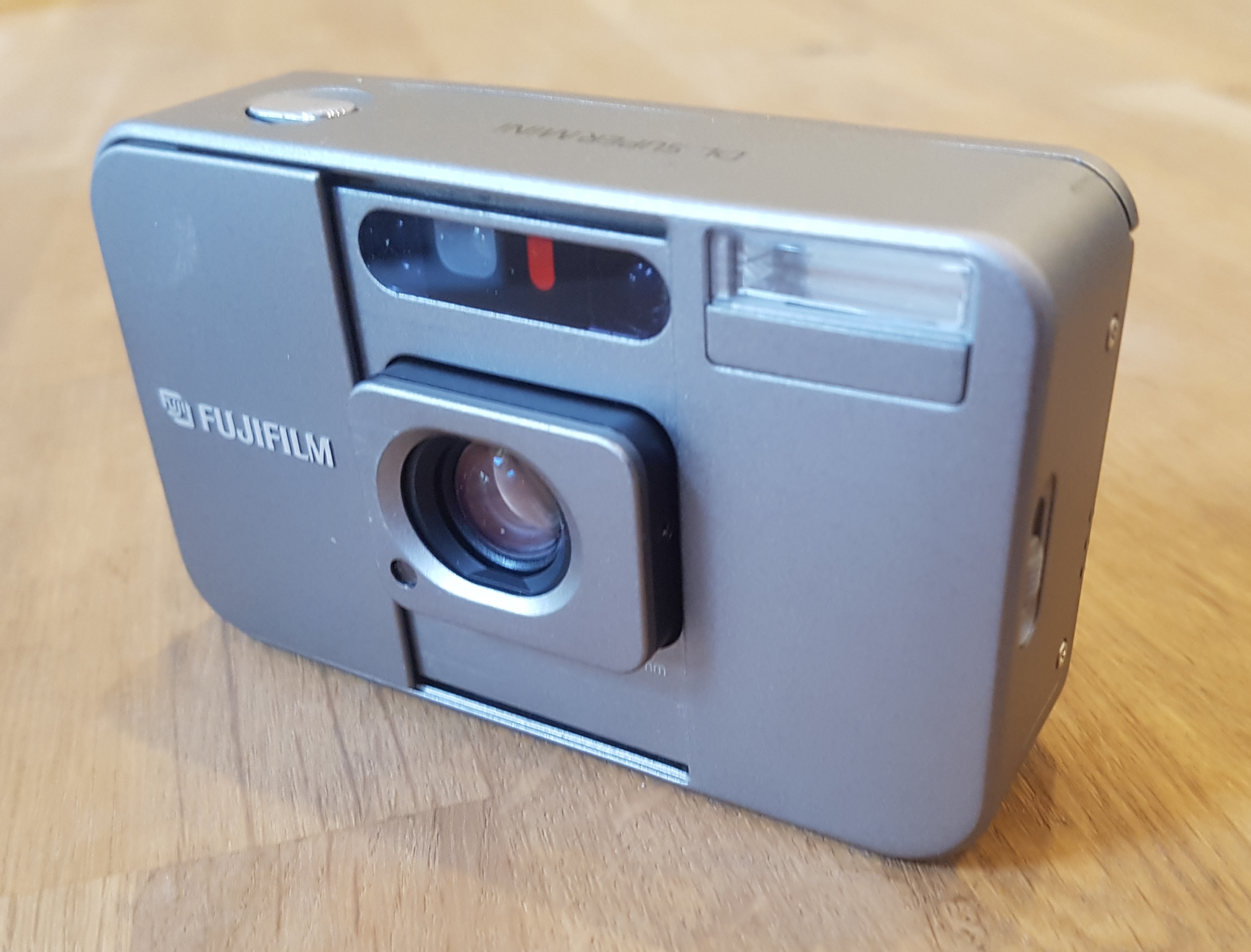 Way back in the 1990s, I was travelling a lot with my work and became a bit frustrated at lugging around an SLR and lenses along with my luggage and work equipment. So I decided to buy a compact camera to make things more manageable. The camera had to have two integral feature: small size and a good lens, both of which the Fuji had. If I remember correctly, it cost about £300, priced then as a premium camera.

The DL Super Mini case is mostly made from aluminium and has a shape which saw it nicknamed “the sardine tin”, it was also sold as the Fuji Tiara in some markets. This camera is incredibly small. It competes with the Rollei 35 for smallest 35mm camera title and when turned off they are both approximately the same size.

However, extending the lens of the Rollei 35 when shooting pictures makes it just a little larger. The camera is turned on by sliding the panel on the front to the right. This action also causes the lens to extend slightly as can be seen pictured above. 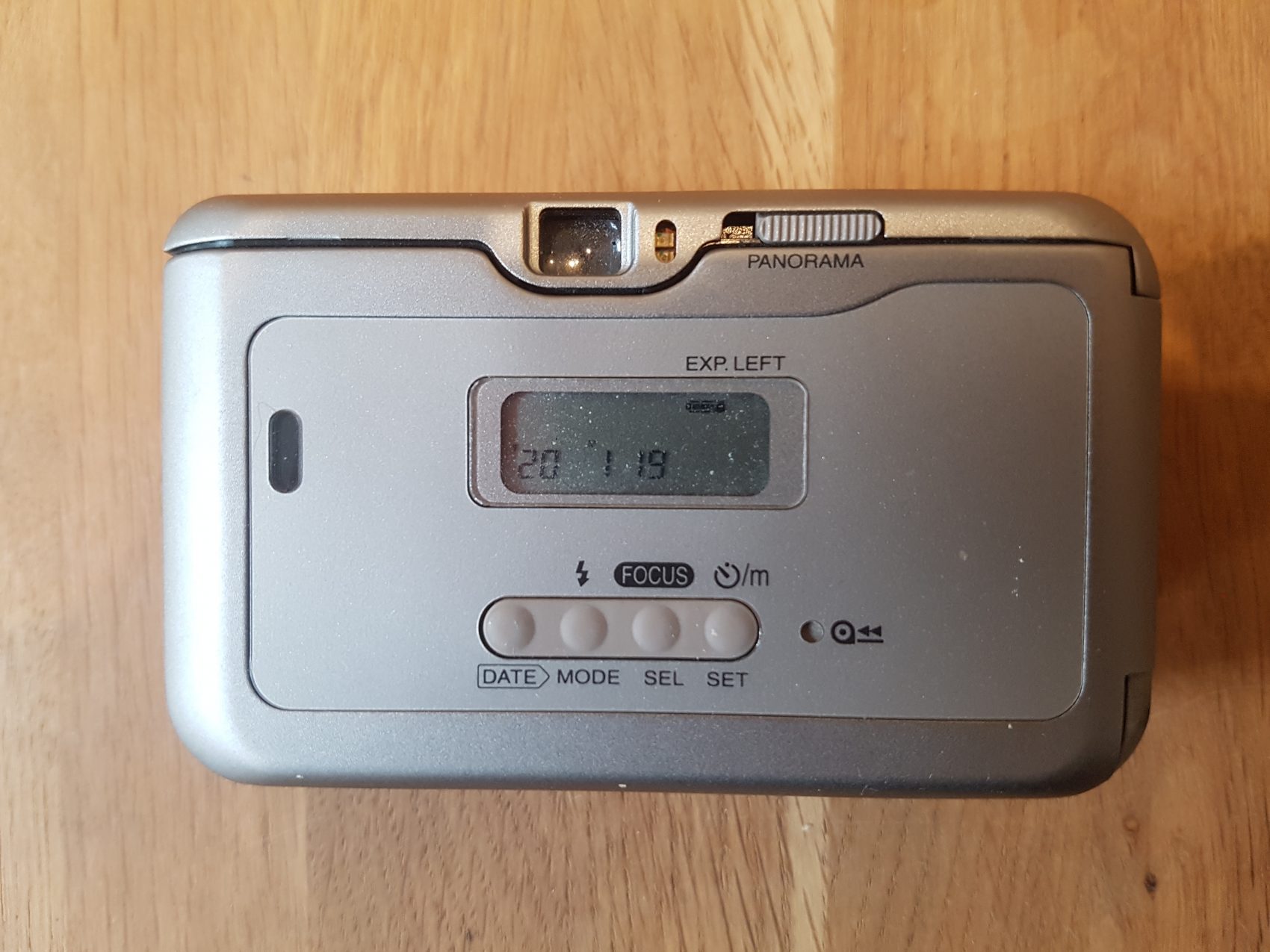 Despite its small size, the camera has a full range of features. It can imprint the date on images, something which I only remembered when part way through taking the images shown below and I hadn’t even set the date! It’s very easy to turn the date function on accidentally by pressing the button on the back of the camera when holding it to take pictures. Other features are a range of flash modes, self timer, autofocus, fixed landscape focus, snap focus and manual focus.

Unfortunately, the settings are lost every time the camera is turned off which is frustrating. There is also a panoramic mode which is achieved by masking the 35mm frame, so it’s not really panoramic as such. Taking a picture at its simplest is merely a matter of framing the subject, pushing the shutter button halfway down until the camera confirms focus with a bleep and a green light, then pushing shutter all the way. 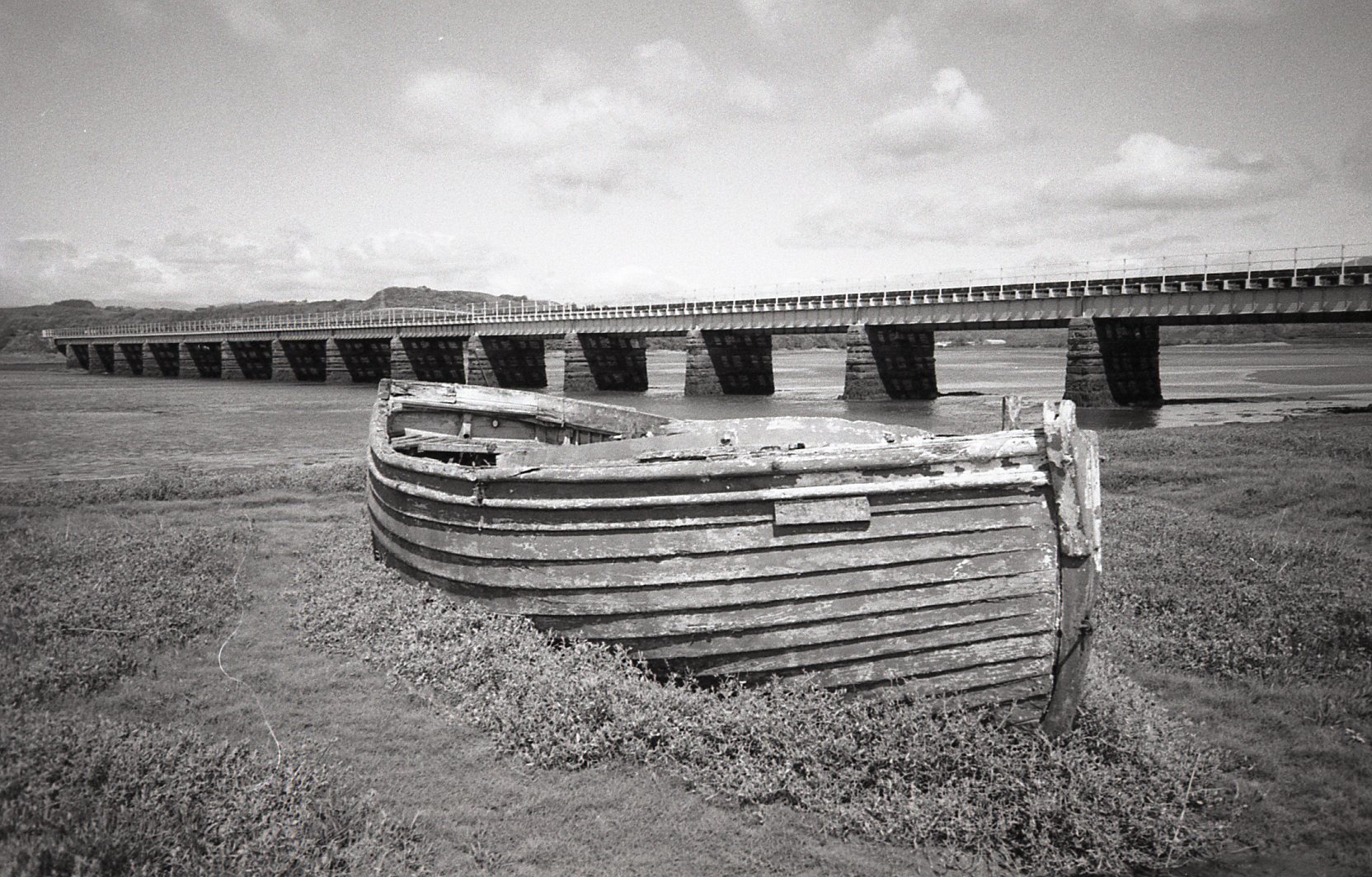 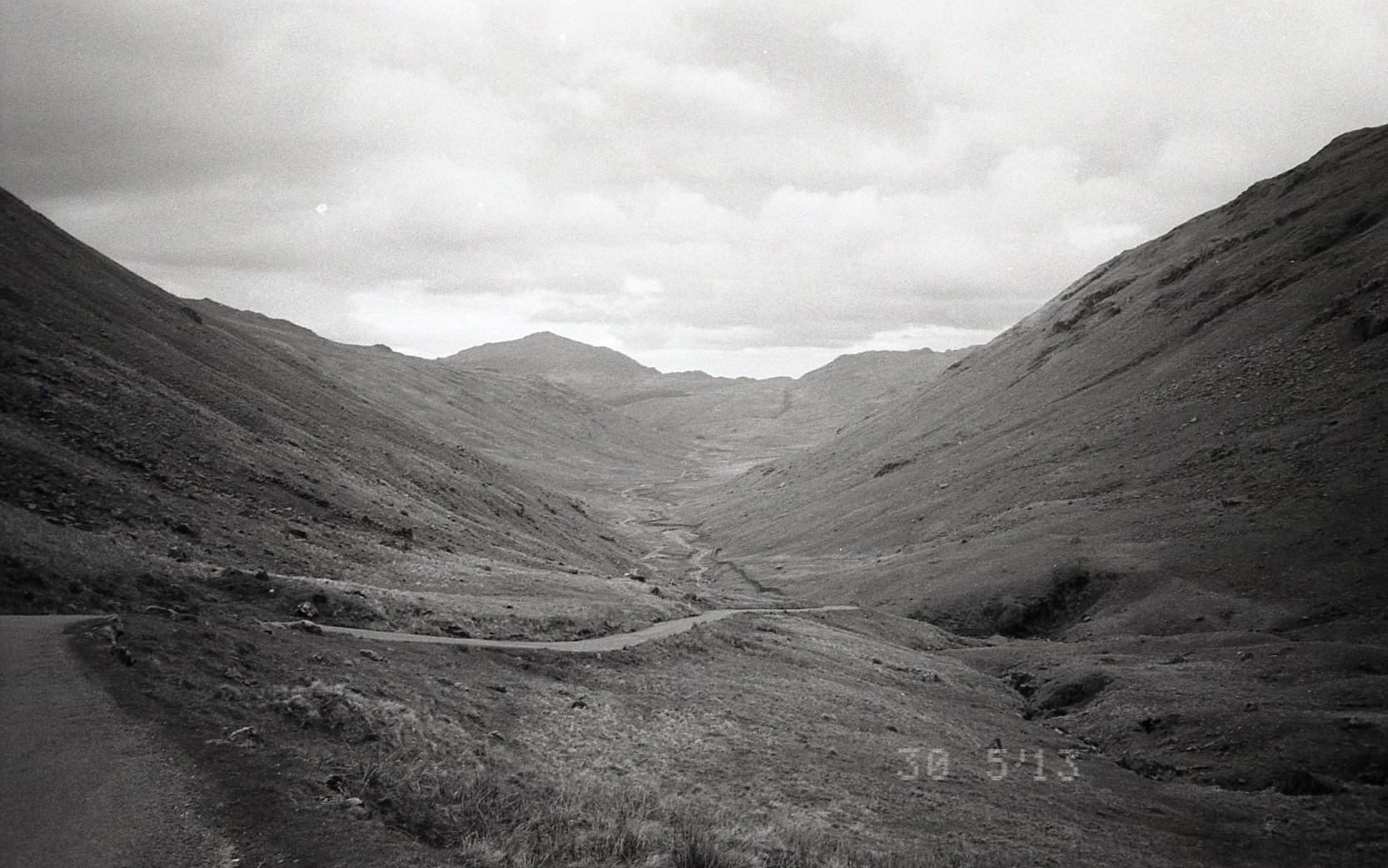 Film loading is easy, just slide the catch that can be seen on the right side of the camera upwards and the back opens enough to insert a 35mm cassette with the leader slightly extended (The DL stands for drop in loading). When the back is closed the camera winds all the film out of the camera and gradually winds it back into the cassette as exposures are made. I assume that the reason for this is that if the back is accidentally opened any existing exposures will not be damaged. The iso is set automatically from the DX coding on the film cassette. There appears to be no way to set it manually so I don’t know what would happen if a non-DX coded cassette was used. 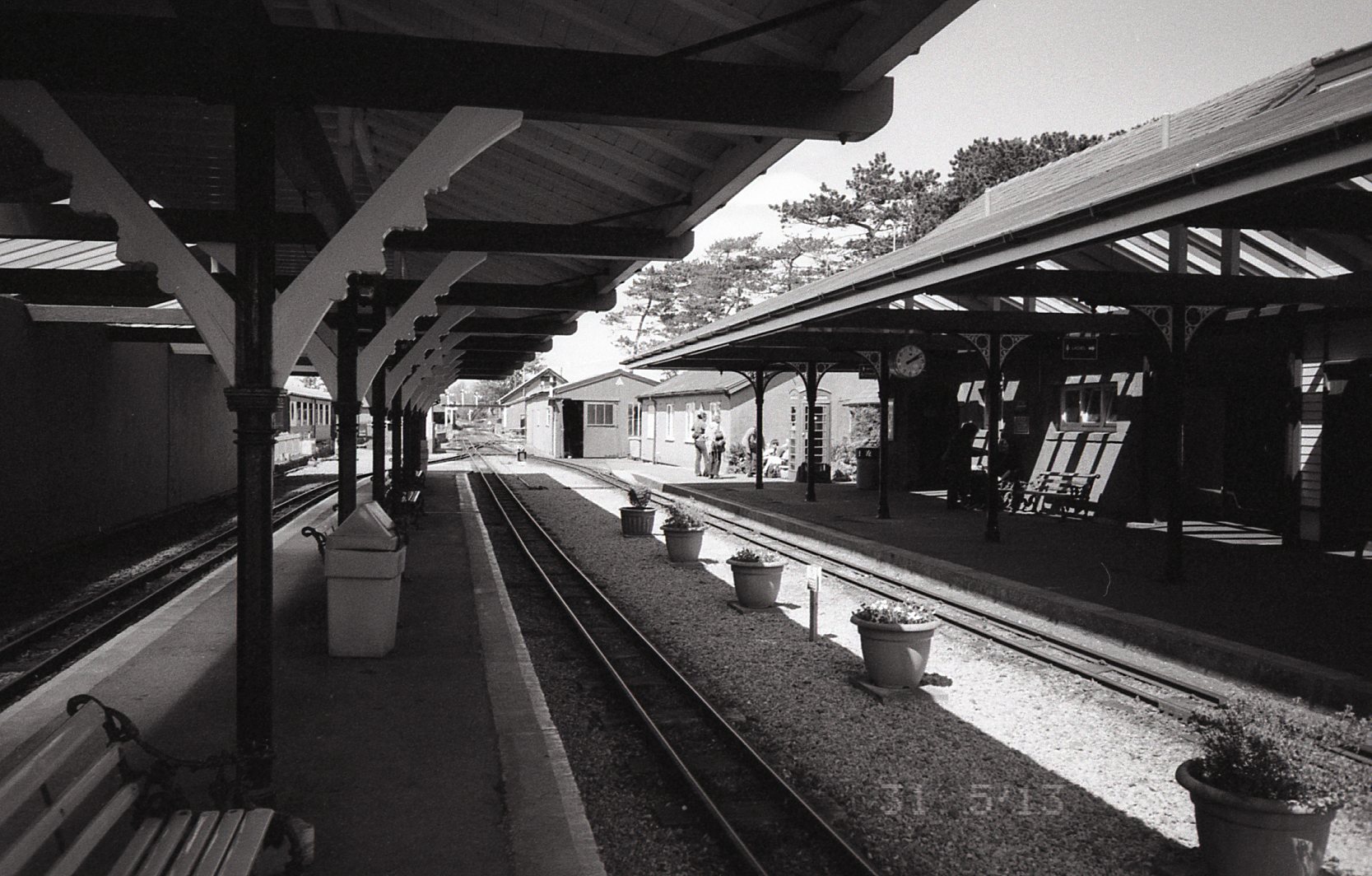 The camera takes CR2 batteries which are still easily available today, and fits into a space on the underside of the camera. My camera is missing the battery cover as I dropped it while changing the battery on the top of the Kleine Matterhorn mountain near Zermatt in Switzerland at the time and could not reach it without risking a fall. I tried to get replacement battery cover but due to the rarity of the camera this was not possible. However the battery fits securely without the cover and a piece of duct tape ensures that it will not move.

The Fujinon 28mm f3.5 lens has four elements in four groups, with two aspherical elements and Fuji’s Super-EBC coating to help with flare. It can produce some impressively sharp images and the autofocus has quite a good hit rate in getting it right. 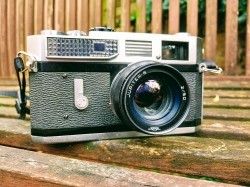 Malcolm Barron
I have been a photographer since the 1970's where I learned the basics on my Zenit E slr and was able to use the school darkroom for development and printing.

I used film until about 2003 when I bought my first digital camera. These days I shoot a mixture of film and digital. I am fairly well travelled and have presented images of those travels in my Flickr pages.

The problem with that is the viewfinder prone for haze