Shooting black-and-white film in the daylight is one thing. Shooting it when the shadows lengthen and the gloom grows is another.

Over the last three-and-a-half years, Kosmo Foto has been selling its debut film, Mono, to photographers around the globe. Released first in 35mm and then in 120 in 2019, nearly 50,000 rolls have been sold so far.

And while Mono is certainly pushable – Kosmo Foto has pushed it to 400 and other photographers have pushed it to ISO 800 and even 1600 – we’ve wanted to add a dedicated higher-ISO film to the roster. Well, now we have.

The film is being launched with something no film brand has ever done before – a special collector’s box (made to look like a film-noir spy’s briefcase) which comes with a graphic novella called ‘The 36 Frames’. It tells the story of Agent Shadow’s late-night dash across a nameless city, pursued by mysterious assailants. The graphic novella is drawn by My Mate Does Art, the designer responsible for Kosmo Foto Mono’s packaging, and the film noir-influenced box for Agent Shadow 400 itself. 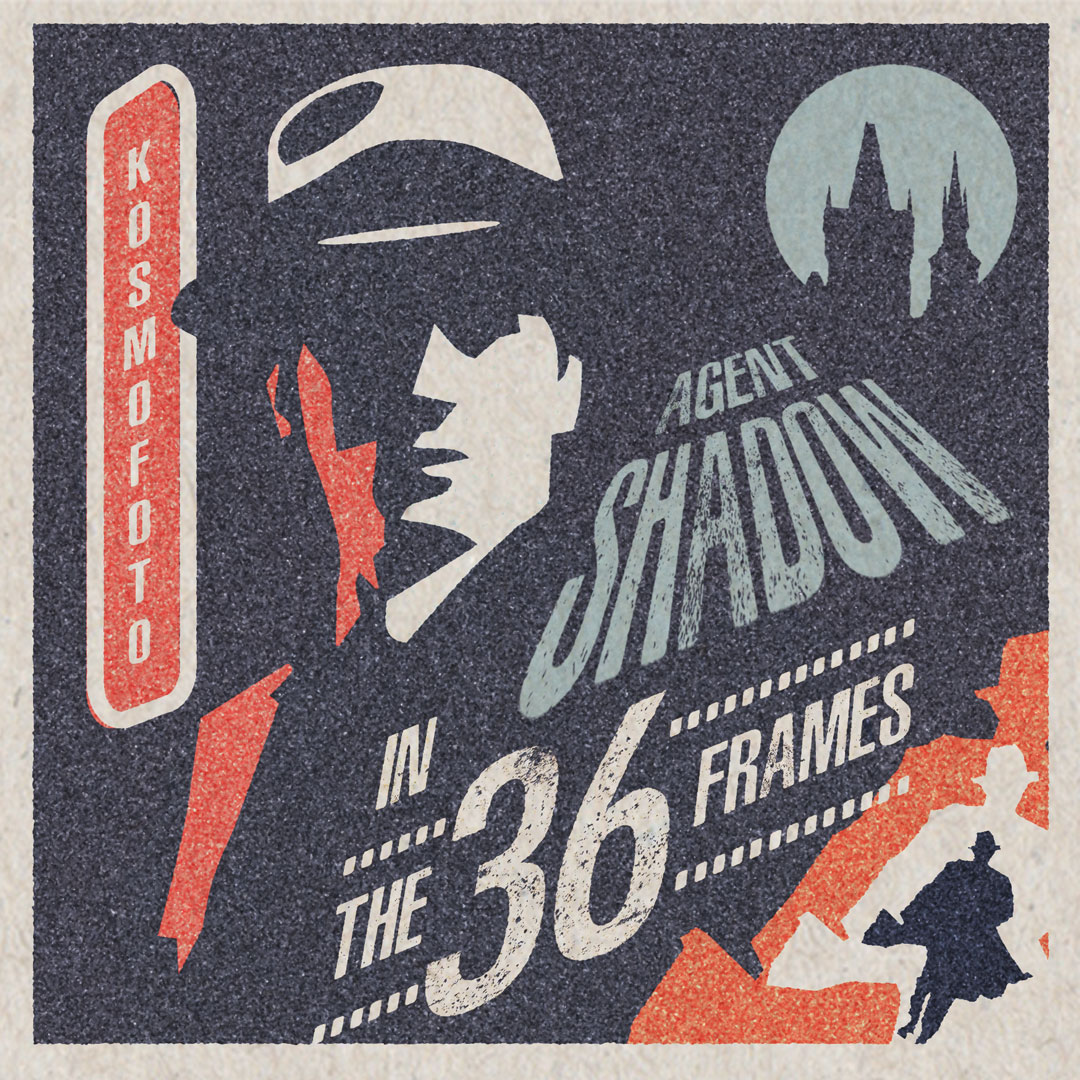 How did all this come about? I had been cobbling together names and ideas for a 400-ISO film almost as soon as Mono launched in 2017, but I knew that I needed to make sure that I didn’t launch a film too soon and risk Mono losing its momentum. One day back in early 2019, on the train back home from work, the idea of a secret agent-themed film siuddenly popped into my head. By the time I’d got home, pretty much everything – the vague storyline and name of ‘The 36 Frames’ included – had arrived. It’s taken two years from that first flash of inspiration to getting Agent Shadow ready for his mission.

Agent Shadow is an established emulsion made by one of the most respected names in film photography, and it’s a film that has some seriously decent atmosphere when it’s pushed past its box speed. Just how far? Well, I had certainly seen some decent examples shot at 800, but what about beyond that? 1600? 3200?

Only one way to find out.

In autumn last year, with the design of the film’s packaging almost complete, I headed to Oxford with my friend John to shoot a short video teaser ahead of the Kickstarter, roping in my friend Jaspar to play a harried, secretive figure fleeing down cobbled, rain-spattered streets and alleyways, fleeing from something or someone on his tail. (And now we know exactly who.)

I’d taken along a Leica R8 to shoot some behind-the-scenes pics with, and the R8’s meter goes all the way up to ISO 6400. The streets we shot the video in were incredibly atmospheric, lit from streetlamps that looked like centrepieces from a European film noir scene. Pushed to 6400, the film looked fantastic – atmospheric grain but still sharp and with bags of contrast. 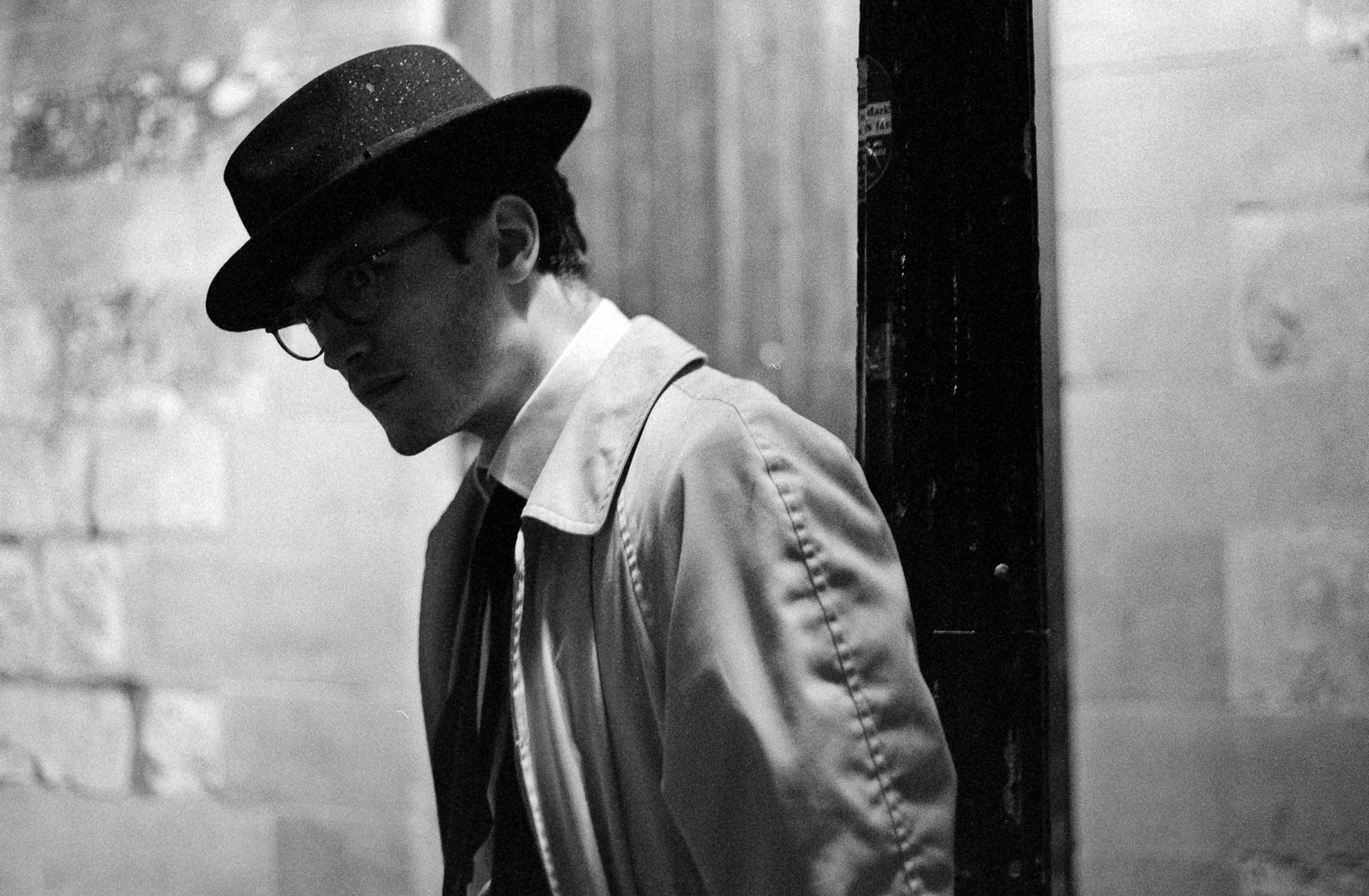 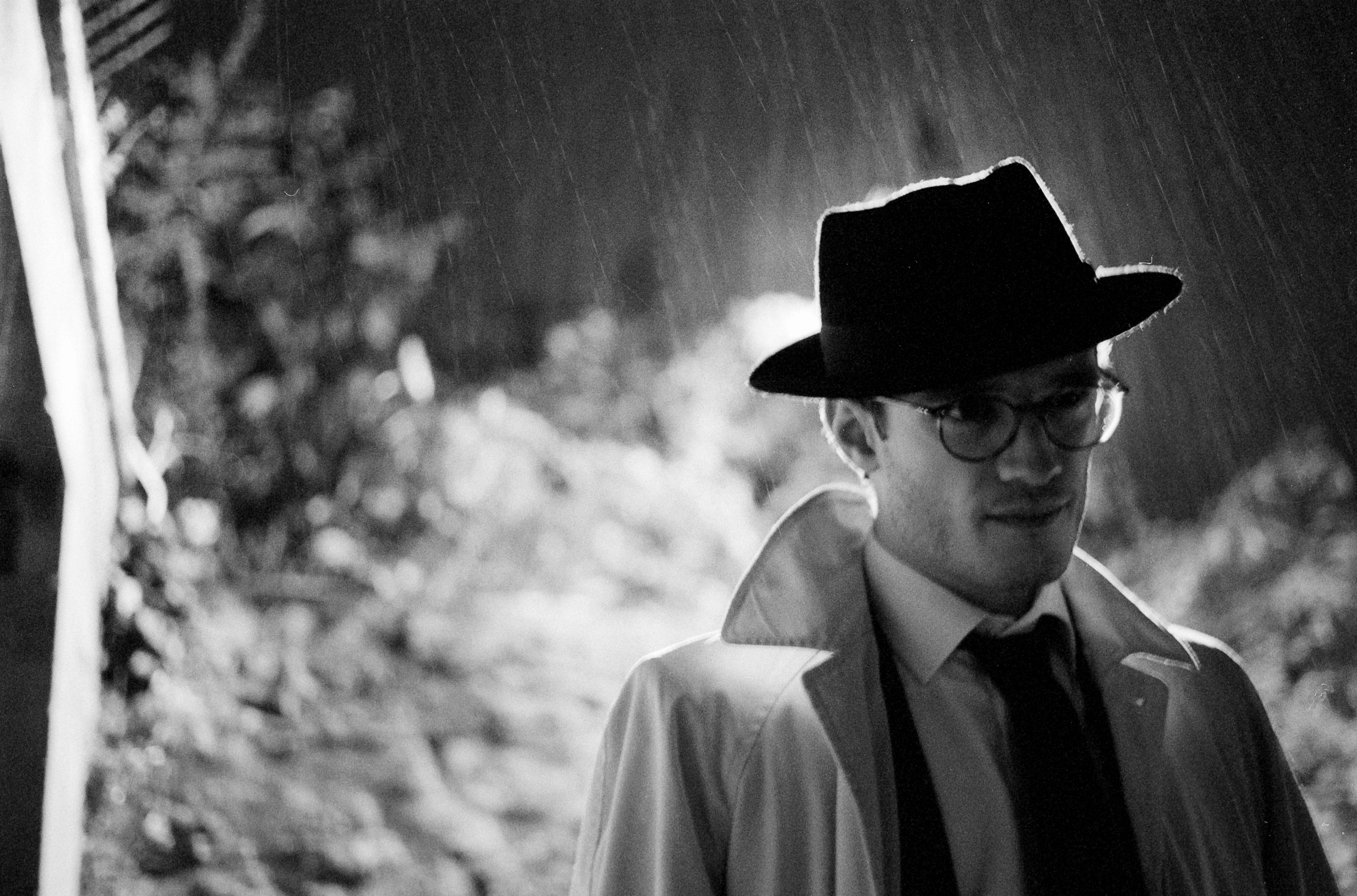 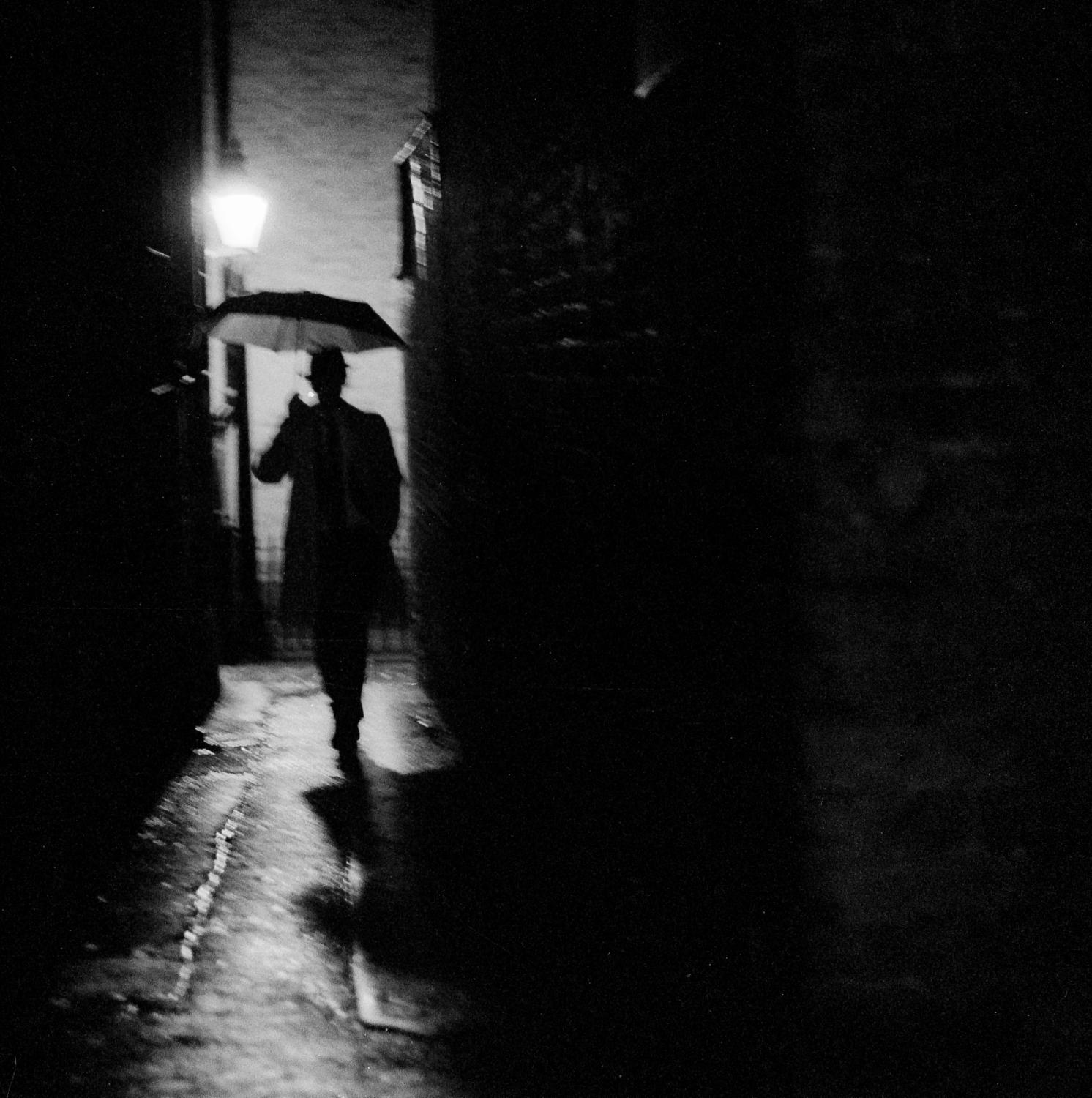 I shot another roll a little closer to home – Greenwich in south-east London – at ISO 3200 during a long, seemingly endless Covid winter. Having a flexible, versatile black-and-white film in your camera bag – one that can be pushed several stops higher than its box speed – is incredibly useful. There’s a reason why films such as Kodak Tri-X, Fujifilm Neopan and Ilford HP5 have such fervent fans. Box speed isn’t the whole story, it’s just one chapter.

You might not see much in common with Agent Shadow’s packaging and Mono’s at first, but there is a common thread. Both films’ packaging is influenced by graphic art from the USSR and Eastern Europe during the Cold War – Mono’s art blasted off into the stars evoking the era of Sputnik and record-breaking cosmonauts, while Agent Shadow is more like a European noir film from behind the Iron Curtain.

It’s amazing how much these noir tropes – the silhouetted figure leaning against the lamp-post, the menace of the city streets at night, the threat of unknown agents lurking around the shadowy corners – still resonate. I grew up in New Zealand in the 1980s, a long, long way from European noir staples like Prague and Vienna, and those images are still completely familiar.

‘The 36 Frames’ comes in a boxset made to look like a vintage briefcase – the kind of thing that would contained secret rocket plans, the formula for some doomsday weapon, or a list of counter agents in a film noir classic. 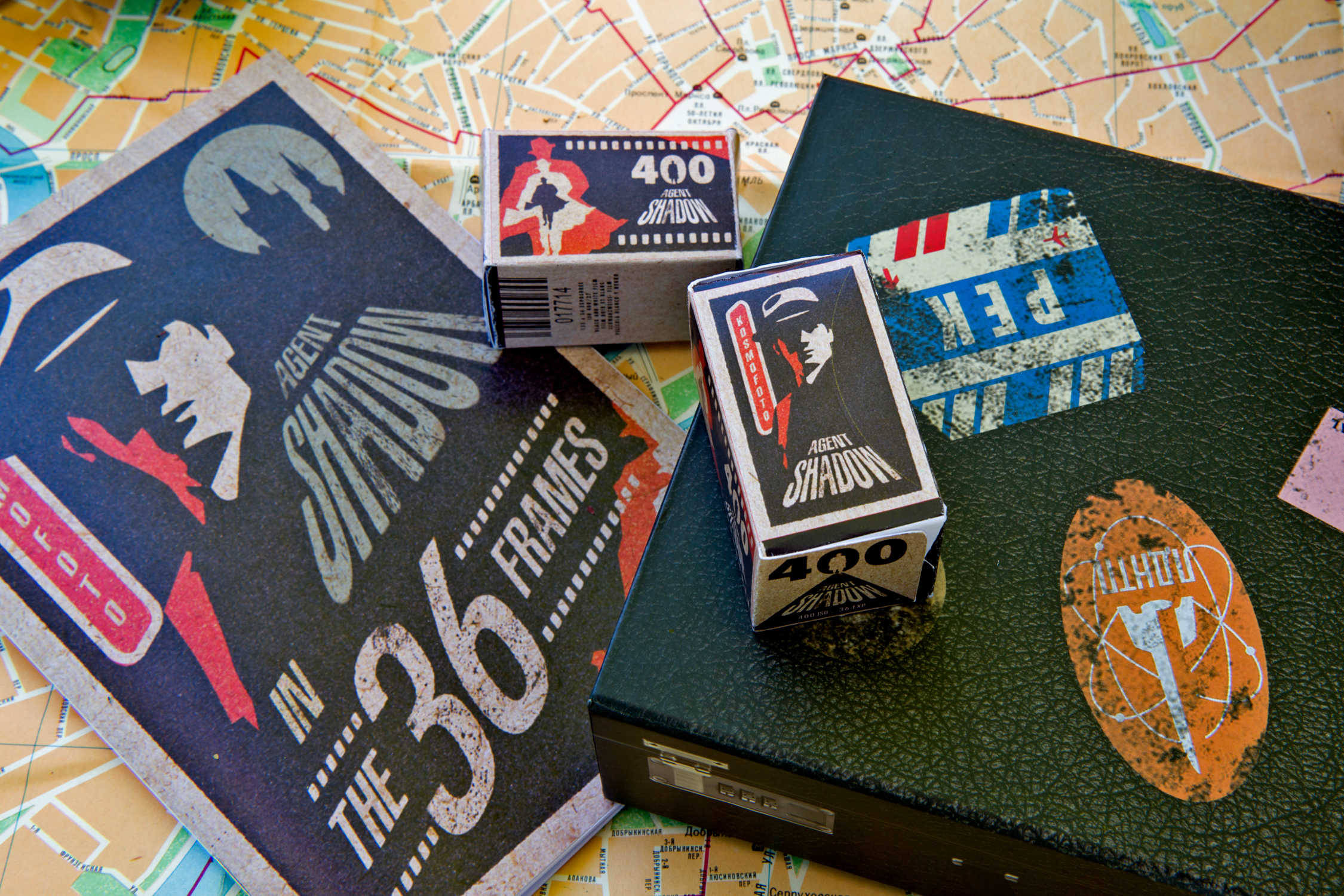 In the months ahead of Agent Shadow’s launch, I sent a bunch of the first test rolls out to a select bunch of photographers around the world. Some are old friends and some fellow analogue devotees I’ve been lucky enough to meet via Instagram, Flickr and Facebook. They include Anthony Rue, who runs the film-friendly café Volta Coffee in Gainesville, Florida, whose photostream is rich with pics taken on a seemingly endless array of cameras; some of his pictures take the noir vibe underwater, to haunting effect. There’s Rob Andrews (aka London Camera Project) with who I run photowalks in London, who shot a roll of Agent Shadow on the streets of Brixton with his trusty Olympus XA2. And two mystery secret agents in the US put Agent Shadow 400 through its paces in a film-noir portrait session. 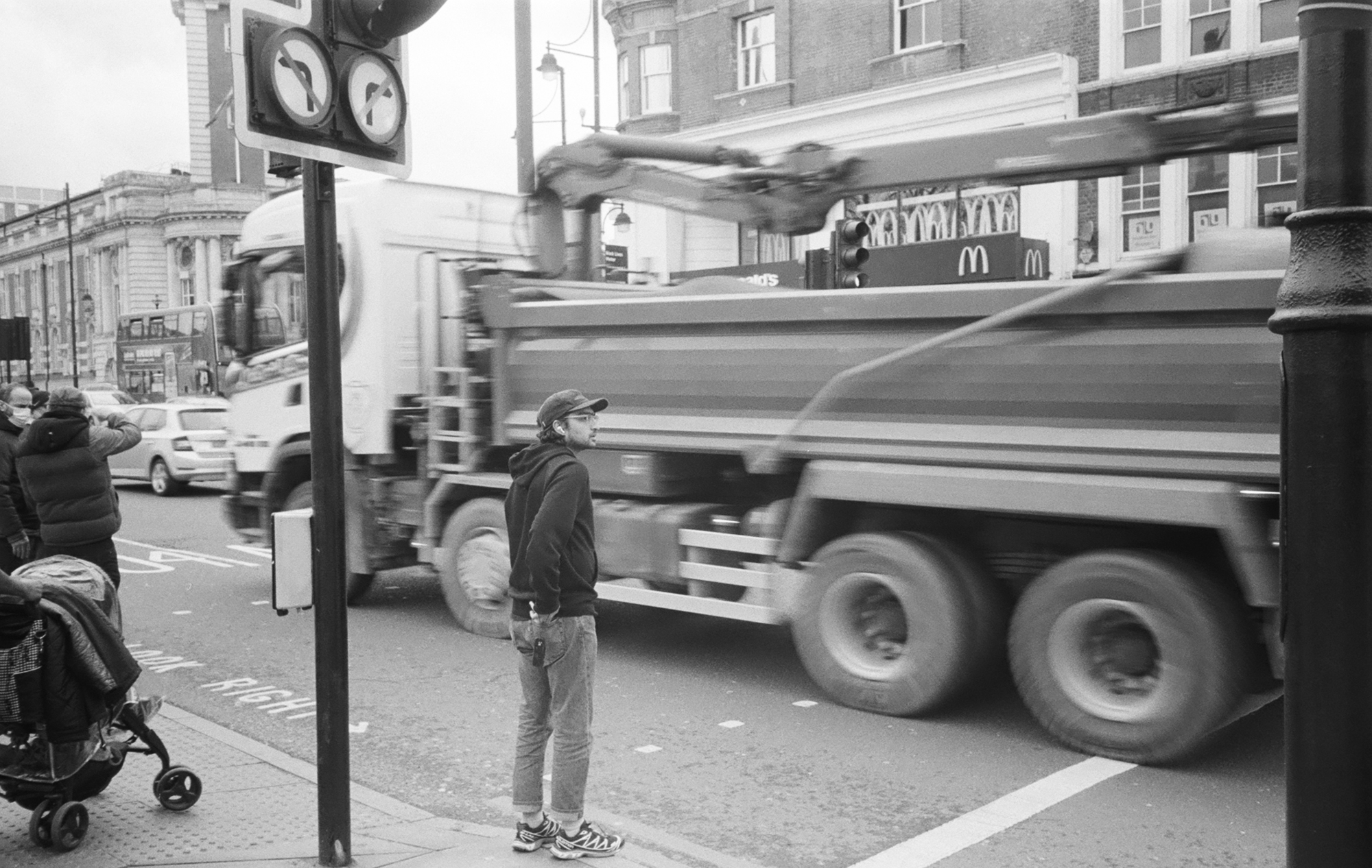 A number of other photographers have shot Agent Shadow over the last few weeks, and you’ll see their results published on Kosmo Foto during the course of our Kickstarter campaign.

If the Kickstarter is successful – which I very much hope it is – further batches of the film will be made later in the year for retailers and Kosmo Foto’s distributors around the world. But if you really want a rendezvous with Agent Shadow, in an atmospheric cobbled alleyway or maybe just in an evening at your local bar, then your mission is simple: pledge away.

Hello Stephen. Is there a way to support the launch and pre-order four rolls without establishing a Kickstarter account with associated login and password? If not, I am happy to wait for Agent Shadow’s appearance in retail. Thank you. Janet

Hi Janet, it’s not possible sorry. I need to crowdfund to raise the cash to produce the film.

[…] for some doomsday weapon, or a list of counter agents in a film noir classic,” Stephen writes in the announcement. It contains five rolls of film and a graphic novella called The 36 Frames drawn by My Mate Does […]

Damn, only just saw this, been a busy year moving around the world during pandemic, blah, blah, blah. Glad to see it was funded and despite missing a camera, would love to get some!

[…] you take a look at Stephen’s announcement post over at Kosmo Foto, you’d be forgiven for thinking the new film was made for low-light shoots, and while you’d be […]