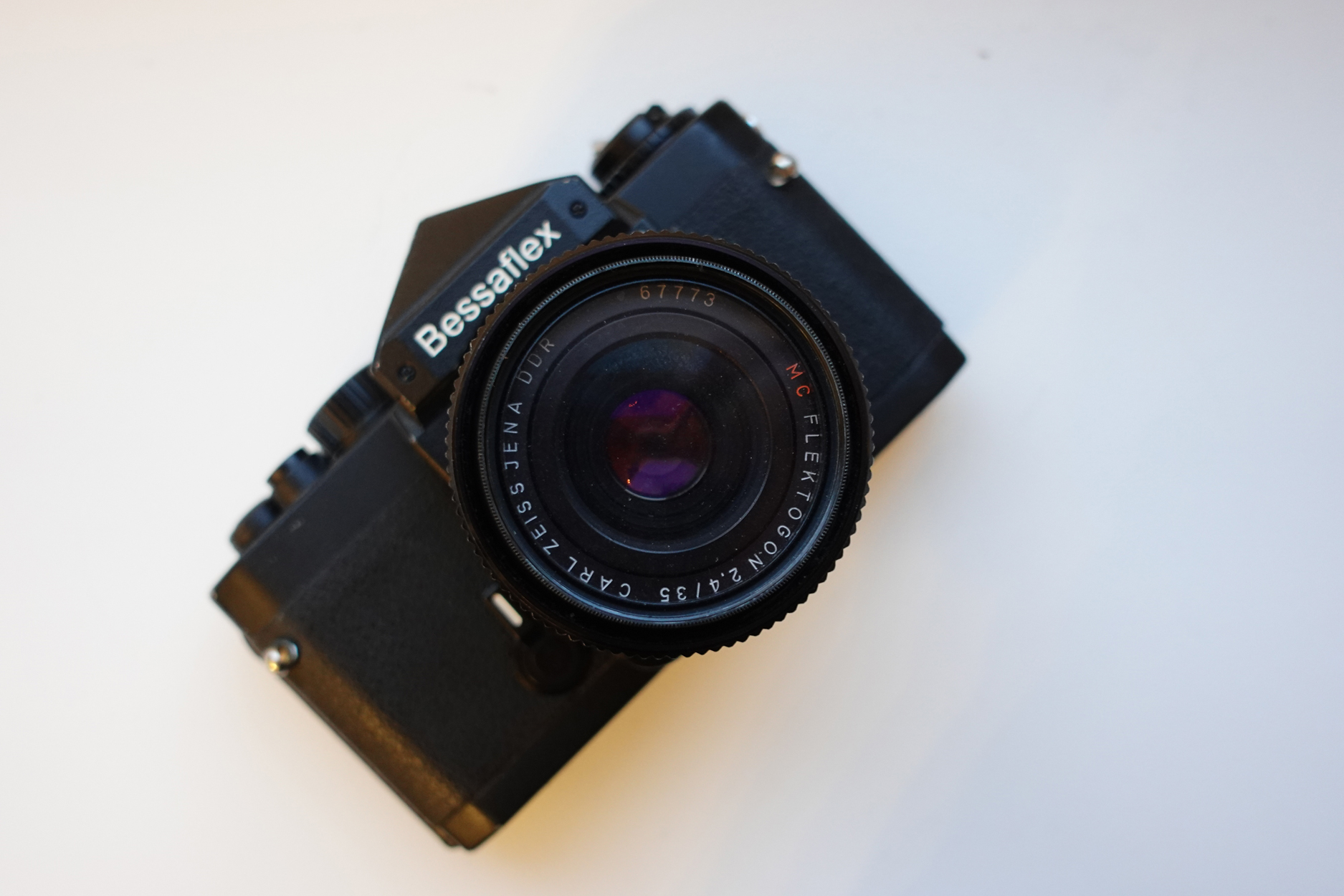 Sometimes good ideas come at just the right time. Sometimes they come a little too late. And sometimes – as good as they are – they turn up just a little too early to be fully appreciated.

The Voigtlander Bessaflex TM is one of the good ideas that appeared too soon.

If you’ve never heard of the Bessaflex TM, don’t worry – most film photographers haven’t. The Bessaflex TM was an SLR released by Cosina in 2003, pretty much during the last gasp of film camera design. It was Cosina’s latest derivation of a camera which it had first released in in the 1980s – the Cosina CT-1.

Cosina then successfully offered this SLR as a third-party camera that other camera manufacturers – think the market-dominating giants such as Nikon and Olympus – that could be introduced as a budget introduction to their SLR ranges. The CT-1, originally a Pentax K-mount camera, became the basis of 1990s cameras such as the Nikon FM-10 and Olympus OM-2000. These cameras kept the respective lens mounts (Nikon F for the FM-10 and Olympus OM for the OM-2000) but were otherwise a completely Cosina design.

Cosina also tweaked the design to produce the Canon T60, the last “Canon” camera to fit the FD lens mount. It gave FD users a modern, lighter body they could use their old lenses on, without splashing out the big money for the all-singing, all-dancing autofocus EOS models (bear in mind that the FD lenses has to be shot manual-focus on EOS cameras).

More importantly, the Bessaflex TM came on the heels of another Cosina brainwave, this time under the Voigtlander name, which they had acquired the rights to in 1999. Cosina decided to take the CT-1 design and rejig not to make a new SLR but a new rangefinder. The Bessa L, released in 1999, was a heavily modified CT-1 body taking Leica L39-mount lenses. Cosina produced a range of new lenses under the Voigtlander brand, but the camera could also obviously use a vast swathe of L39 lenses made by the like of Leica and Canon and the lens factories of the Soviet Union.

The Bessa L didn’t have a viewfinder or a rangefinder, but Cosina marketed it as a body to use ultra-wide lenses which had previously been very expensive and hard to find for screw mount Leicas. Each of these new lenses – like the 15mm and 12mm Cosina produced – came with an accessory viewfinder which fitted in the hotshoe.

The Bessa-L kickstarted a mini rangefinder revolution at Cosina. The Bessa T followed, a broadly similar camera this time accepting Leica M-mount lenses. The Bessa R was a more conventional rangefinder giving the Leica screw-mount all the benefits of modern SLRs – a hinged back, a TTL lightmeter, a 1/2000th fastest speed, framelines for lenses from 35mm to 90mm and an incredibly bright viewfinder. It was, as Cameraquest noted at the time, “focused on the photogs who want to go out and take pictures”.

The R led to the R2, R3 and R4 range of cameras which became increasingly more sophisticated – the R2 was made for old Nikon or Contax rangefinder lenses of Leica M-mount, and the R3 and R4 series were in Leica M mount. They were considerably cheaper than Leica’s own M-mount cameras, even secondhand.

It seems around that time Cosina’s president, Hirofumi Koyabashi, had a brain wave. A tonne of perfectly usable manual-focus SLR lenses were languishing in cameras bags or shop shelves, because the original bodies were too long in the tooth or getting harder to repair. At the time, the only major Japanese camera brands still making solid, manual-focus SLRs were Nikon and Olympus. The CT-1 could be tweaked again a create a whole new SLT family to use heritage lenses in the 21st Century.

Cosina unveiled the Bessaflex TM in M42-mount (TM meaning Thread Mount) in 2003, along with a fleet of SL lenses. The lenses hinted that the new Bessaflex was just the beginning; the lenses weren’t just available in M42, but in Canon FD, Contax/Yashica MM,  Minolta MD, Nikon AiS, Pentax K and Olympus OM mounts. Cosina looked like it was about to kickstart a revival of manual-focus SLRs just as digital photography was gaining ground.

The Bessaflex TM appeared in shops towards the end of 2003. It was available in two distinct styles. The black model aped the look of the original Nikon F from nearly half a century before. The silver version (actually painted plastic) was modelled on the Topcon Super D from the 1960s. The little Bessaflexes lacked a hotshoe mount but instead had an all-manual shutter that could fire as fast as 1/2000th, a stunningly bright viewfinder, stopdown metering (with an LED readout in the viewfinder) and metering up to ISO 1600. The only thing that needed batteries was the meter, and this was powered by a pair of little LR44 button cells you could buy from any pharmacy or corner store. No more searching for short-lived Wein cells for your Spotmatic or second-guessing Sunny 16 because your Zenit-E’s selenium meter had carked it. And the Bessaflex was small – Olympus OM-1 small. It had just enough metal in its body not to feel plasticky and cheap, but not so much that it felt like lugging around something from the 1950s. And it was sensibly priced – new, it cost around £300, body only.

The Bessaflex series, however, never went further than the TM. That camera only remained in production for only four years, being discontinued in 2007.

I once had three Bessaflexes, thanks to having a drawer full of M42 lenses. A couple of Bessaflexes weighed next to nothing, and I could take a few lenses and always have one loaded with black-and-white and another with colour film while I was travelling. The Silver Bessaflex saw less service than the two black models, partly because it seemed to feel less robust. Over the years, as the price of these cameras kept rising, I sold a couple of them but kept the more scuffed of the black models as a keepsake. Those little cameras clocked up some serious air miles – Croatia, New Zealand, Sicily, Ukraine, Danish classic car rallies, even shooting concerts. I picked it up again last year in the first wave of lockdown and took it out shooting again. I’d forgotten how genuinely pleasing it is to use.

The Bessaflex remains a little-known anecdote in the history of films SLRs might be down to one major stroke of bad luck – timing.  When the Bessaflex TM was released, many photographers were swapping their film kit for the first generation of digital SLRs. The shelves of camera shops were fair groaning with the kind of kit that used to cost a monthly wage; now they could be snapped up for next to nothing. The Nikon FM2 and Olympus OM-4Ti could still be bought new, having only recently been discontinued. Why take a punt on a partly plastic Cosina when the real heavy-metal deal was available at such a knock-down price.

Hindsight is easy, but it’s worth thinking – what if Cosina had brought this out a decade or a decade-and-a-half later. In 2017, the Reflex Kickstarter imagined a modular SLR that would allow you to use all those old manual focus lenses on a new body. Swapping lens mounts would be little more bother than changing a lens. Enough film shooters were interested to fund the project far past its £100,000 goal, but it didn’t take long for the Reflex to hit the buffers. For one, the Reflex team had to design their own shutter, something that could easily swallow hundreds of thousands of dollars in R&D. The Reflex project is – at least in October 2020 – still a going concern, but hasn’t got past a demonstrator prototype.

Now imagine if Cosina, a company with decades of experience making cameras both for itself and other people, had announced the Bessaflex. All the R&D for this camera had been carried out three decades before with the CT-1, so it would simply have been a case of creating moulds for the camera body. Cosina already had experience in making one body flexible enough for a range of lens mounts, so this would have held few fears. Camera shops – well, those still left – would no longer have seemingly inexhaustible supplies of film cameras. A small, reliable, bright-finder SLR taking button cells batteries would have been nothing less than a sensation.

Unfortunately, if such a camera ever does appear, it probably won’t be Cosina who make it. Back in 2017, I spoke to someone at Cosina about the possibility of film camera production there being revived (the last of the Bessa rangefinders rolled off the production lines in 2013). Cosina could no longer spare the cash to make the moulds for new film camera bodies, and there was uncertainty over certain parts for film camera shutters. At the time, there was general reluctance to throw any money at all towards any kind of film camera production. I’ve not heard anything recently which suggests there has been a change of heart.

Film’s darkest days – fingers crossed – appear to be behind it, the ranks of film photographers swelled by the likes of Instagram, LOMOgraphy and Dubblefilm who have all helped make film relevant again in the 21st Century. This new generation certainly deserve a new camera like the Bessaflex.

Out of curiosity I had a look on eBay for the Bessaflex TM. Wow, the sellers are asking for serious cash for these cameras, anything from £500 to £1000. That’s a lot for a Cosina CT1 derivative.

I purchased a Nikon FE10 a while ago for $25 US I thoroughly enjoyed it. I agree if Cosina re started production of a 35mm SLR camera they would fly off the shelves.

Very interesting article. I have the T60 for FD lenses and yes, it is light and easy to carry. Unfortunately the shutter is electric and needs a battery to operate at all.

Hi. I think there are a lot of other cameras around that are cheaper and ever more advanced, I got the Pentacon from the 60th with the old “screwing mount” for lenses, which was big at that time.
Best, Jens