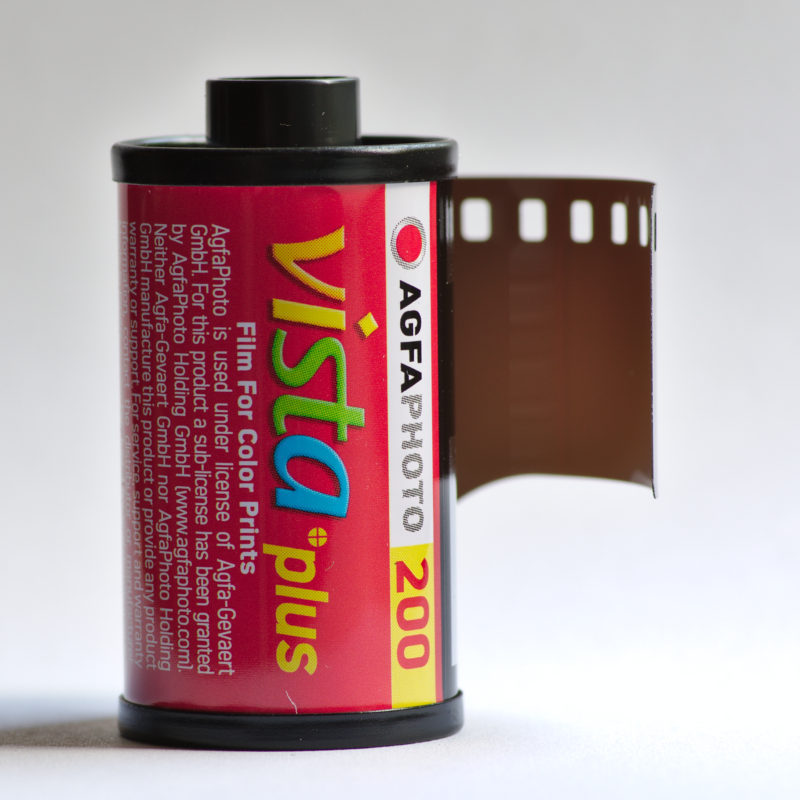 Film photography’s revival doesn’t mean that all the films that have survived the cull so far will enjoy a second wind.

There has been a great deal of press over the last week since the news that Agfa Vista 200 is no more.

Vista 200 had been an Agfa-made film in the 1990s and 2000s, a cheap and plentiful consumer-grade film sold in chemists, supermarkets, electronics stores and film labs. In the great gold rush for consumer film makers during this time, the Vista range was enormously popular, especially in Europe.

The axe fell dramatically in 2004. Amid plunging sales, Agfa left the consumer film market, dropping a raft of consumer brands like Vista – also available in 100, 400 and 800-ISO rolls – and the much-loved Precisa CT100 consumer slide, along with their professional lines like RSX and Ultra.

It was the end of production, but not the end of the Vista name. Like many other once-famous photographic brands, Vista became a badge for an entirely different film.

The Agfa Vista 200 of recent years was not made in Germany or Belgium; it was Fujicolor C200, a consumer-grade print film made in Japan. Agfaphoto, the “Agfa” film line owned by Lupus Imaging, imports Fuji films like this and Fuji Provia 100F, which has become Agfaphoto Precisa.

Vista 200’s death was keenly felt because it was one of the cheapest films on the market – in the UK, the budget retailer Poundland used to sell 24-frame rolls of it for £1. Amateurs, youngsters, Lomographers and experimenters have felt its departure more than most.

The days of cheap, cheap film are probably over forever, unless by some miracle the film revival leads to more factories being built and mothballed film production lines whirring back into life.

But there is room for further growth. We’ve seen old emulsions – like FILM Ferrania’s P30 and Kodak’s Ektachrome – brought back to life, the former available for the first time as a 35mm film. There have been new films like Bergger’s Pancro 400 and Fomapan’s Retropan 320. Japan Camera Hunter also delivered a traffic surveillance film (StreetPan 400) previously unavailable as a stills product ,first in 35mm and then in 120.

But one area we haven’t seen growth in is in lower ISO colour negative film – 100 speed film most of all.

The 100-ISO colour negative film was the stalwart of the summer holiday. Grain was usually restrained and the colours vibrant – helped by the fact that it was designed to be used in bright light. Every film manufacturer used to produce a range of 100-ISO colour films, often consumer lines as well as professional marques. They have dwindled to a mere handful.

Kodak’s Ektar 100 is the best-known of them, a capable film that has fine grain, beautiful colour rendition and which is very easy to scan. It sits alongside the Portra range as one of the colour films in Kodak’s professional roster. I’ve shot a lot of it – it’s a great film. But at over £6.50 a roll here in the UK, not exactly cheap.

Kodak also produce another 100-speed film, this one seemingly aimed at the consumer end of the market. ProFoto 100 is a very hard film to get hold of in Europe – my experience is limited to a five-pack I bought from an eBay vendor in Thailand a few years back. It feels a little grainier than Ektar but is still a fine film. Trouble is, it seems to be predominantly aimed at the Asian market. That’s fine if you live in Kolkata, Kathmandu or Kuala Lumpur, but less convenient if you’re in Krakow, Koblenz or Kettering. Essentially, ProFoto 100 is a tweaked version of  Kodak Gold 100, a favoured film of yesteryear. It has remained even as Gold 100 has shuffled off.

The third is Lomography CN100. This is Lomography’s cheap-and-cheerful summer film, the slowest conventional film they have. It’s available in packs of three for around £10. That’s not as cheap-as-chips as Agfa Vista at Poundland, but not to be sniffed at.

The box says the film is made in the USA, but I’ve been led to believe it’s neither of the Kodak films mentioned abovee. Is it an older emulsion cold stored in giant rolls? Possibly.

My bet is this film – which in my experience is great fun to shoot with – is going to get a hell of a lot more popular. If Lomography only has a limited supply, it’s a fair bet it’s not going to last much longer.

The film renaissance still shows promise, as more and more young photographers gravitate towards film. Many of them will want film that gives them the colour and saturation that they’ve become accustomed to with digital.

But this that film has to be cheap. It can’t be another pro emulsion costing up to £10 a pop.

So one of the remaining film companies can just fill that gap with a new colour neg film, something like the old Kodak Gold 100, right? No; creating a brand new film is not easy. It requires  lots of patient research, and a budget that runs into the tens of thousands of pounds before you have film ready to sell. And that’s just if you’re making black-and-white film.

Last year, one film industry figure told me: “Current companies manufacturing colour film are keeping the channel alive for products which they R&Ded more than 20 years ago. They scaled down to the absolute minimum and just kept as many people as necessary to barely keep the operations going.

“Prices for film usually do not reflect any R&D, machinery or other investment costs. They are materials, energies, wages plus a very small profit.” Nothing short of a crazy millionaire – or tens of millions more teenagers ditching iPhones for secondhand Spotmatics – is likely to change that any time soon.

So it looks like brand new emulsions are out of the question, at least for the short term.

The answer, it seems, is reviving  one of the old films that used to fill this gap.

Fujifilm used to have two wonderful 100-speed films – Superia 100 and Reala 100. Neither have survived the company’s consistent downsizing of its film portfolio. Despite some rumours last year that Reala 100 might be making a return, there has been nothing concrete.

The best chances lie in Rochester, New York and Ferrania in Italy. Kodak has already shown a willingness to bring back films that had previously been discontinued. While Ektachrome’s release date has not yet been finalised – Kosmo Foto has been told by Kodak Alaris there will be further news in May – the company brought one old film back already this year in the shape of its much-missed TMax P3200 high-speed black-and-white film.

Kodak have two options, neither of which  require a brand new emulsion.

First, it can increase the production of ProFoto 100, and make it available in all territories. Price it competitively; people will still buy the excellent Ektar, especially for projects, or special occasions. Market ProFoto 100 as THE summer holiday film.

The other option? Dust off the recipe for Kodak Gold 100. Play to its retro strengths. Evoke those memories of Kodak Moments of decades past.

In Italy, FILM Ferrania are still doing painstaking work bringing back to life the old Ferrania’s R&D plant. This is a much smaller facility than the giant processing plants at Kodak and Fujifilm, but a more pragmatic solution for the 21st Century film market.

When FILM Ferrania was relaunched in 2013, their initial intention was to begin with production of a 100-ISO slide film. Nearly five years later, that film is yet to repair. Like Kodak, however, they’ve filled the gap with a black-and-white film, the 80-ISO P30.

In interviews, FILM Ferrania’s co-founder Nicola Baldini has vowed to bring back Ferrania’s famous Solaris range of colour negative films, the Italian answer to Agfa Vista or Kodak Gold. First and foremost on the list was Solaris 100.

Whether the reborn Solaris can be priced low enough to replace Agfa Vista 200 remains to be seen. Economies of scale probably make that unlikely.

But another 100-speed colour film on the market may persuade someone else to take the plunge. Especially if a crazy millionaire or two decides to help out.

Death of Vista 200 isn’t really saddening to me as out of all cheap color films (Colorplus 200 and C200 beeing the other 2) it was the most expensive here in Poland but I understand that in other part of the world it was the opposite. That beeing said what I fear the most is that its discontinuation might mean that Fujifilm C200 is out of production already or its discontinuation is happening and last batches are beeing made and Fuji wants to make as much money out of existing stock as possible. I would really want to see some… Read more »

What a great post. I think you put your finger right on it: the era of cheap film is ending. But there’s still a place for cheap film if a couple of the right manufacturers will figure out how to do it. And cheap doesn’t have to be quite *as* cheap as we’re used to. I pay about $2.50 a roll for Fujicolor 200. Kodak Gold 200 is to be had here for about $3.50 a roll. That feels about as inexpensive as either company can do it. While nobody likes to pay more for things, if “cheap film” went… Read more »

As someone who takes virtually all his colour with reversal, as it scans for large prints so much better than negative, with my Leitz BEOON scanner, £10 a roll does not seem desperately expensive for negative. This is particularly if you take into account the additional cost of high quality E6 processing against C41, available anywhere there is a Fuji Frontier mini lab.

I’d be more than happy if Kodak, and/or Fuji, brought back older emulsions. They worked fine and see no need to expend any money on a newer emulsion which would end up possibly too pricey. I like Ektachrome coming back as I am a dyed in the wool slide fanatic. I would love to see Kodachrome, as I have hundreds and hundreds of slides, but we know the chemistry is not coming back. Cost wise I do have my upper limits. Fuji slide film at $12-15 per roll and then developing is prohibitive. At a total of roughly $25 per… Read more »

Thank you for this thought-provoking article. Sad to lose Acros-100 if the rumors are valid, but I guess Fuji must be saying, “If you want that Acros look, buy one of our mirrorless digicams with Acros-simulation.” All of this makes me SO glad to have a freezer-full of Ektar, C200, Provia, Velvia and other color C-41 and E-6 films, as well as plenty of B/W stock. I know the clock may be ticking as to just how long they’ll maintain original quality, even when freezer-stored; but, at least for now, I have plenty of “comfort food” to feed to my… Read more »