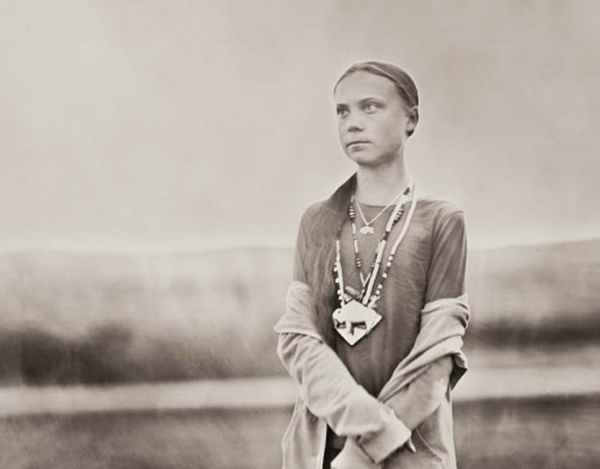 The photographer who took a wet plate portrait of environmental activist Greta Thunberg in North Dakota says he has been completely surprised at the fierce opposition to plans to make a mural from it.

Shane Balkowitsch planned to paint a mural of the image – taken at Standing Rock Sioux Reservation last year – on the wall of bakery in Bismarck, North Dakota.

But the plans, announced on Tuesday (12 February) attracted furious opposition – and means Balkowitsch, who runs a wet plate photography business, has decided to shelve plans to mount the seven-foot-tall mural in his home state.

“I had no idea it would come to this, I was completely caught off guard by the reactions,” the photographer told Kosmo Foto on Thursday. “Art is supposed to invoke whatever it does in the person viewing it, for good or for bad. I have to think that there will be a silver lining in all of this.” Asked if he had been surprised by the level of resistance to the mural, Balkowitsch simple said: “Yes.”

A Facebook post on the page of local TV news station KFYR-TV announcing the plan had drawn more than 1,200 comments, the vast majority of them negative.

Balkowitsch had said the mural was supposed to mark the momentous visit of Thunberg – the Swedish teenager whose school strike over climate change has sparked a global movement – to North Dakota, and was not a championing of her views.

Some people had threatened to vandalise the mural, and to boycott the bakery on whose wall it was to be painted.

North Dakota has a large oil sector, an industry accused of contributing hugely to rising carbon dioxide levels which help warm the climate.

The story has become national news in the US with papers such as the Washington Post and New York Times reporting on it. On Wednesday the photographer said he may have to shelve the mural.

But on Thursday, Balkowitsch told Kosmo Foto: “There are numerous places as of this morning that are looking to potentially install ‘Standing For Us All’.  I do not think she can find a place here in Bismarck.”