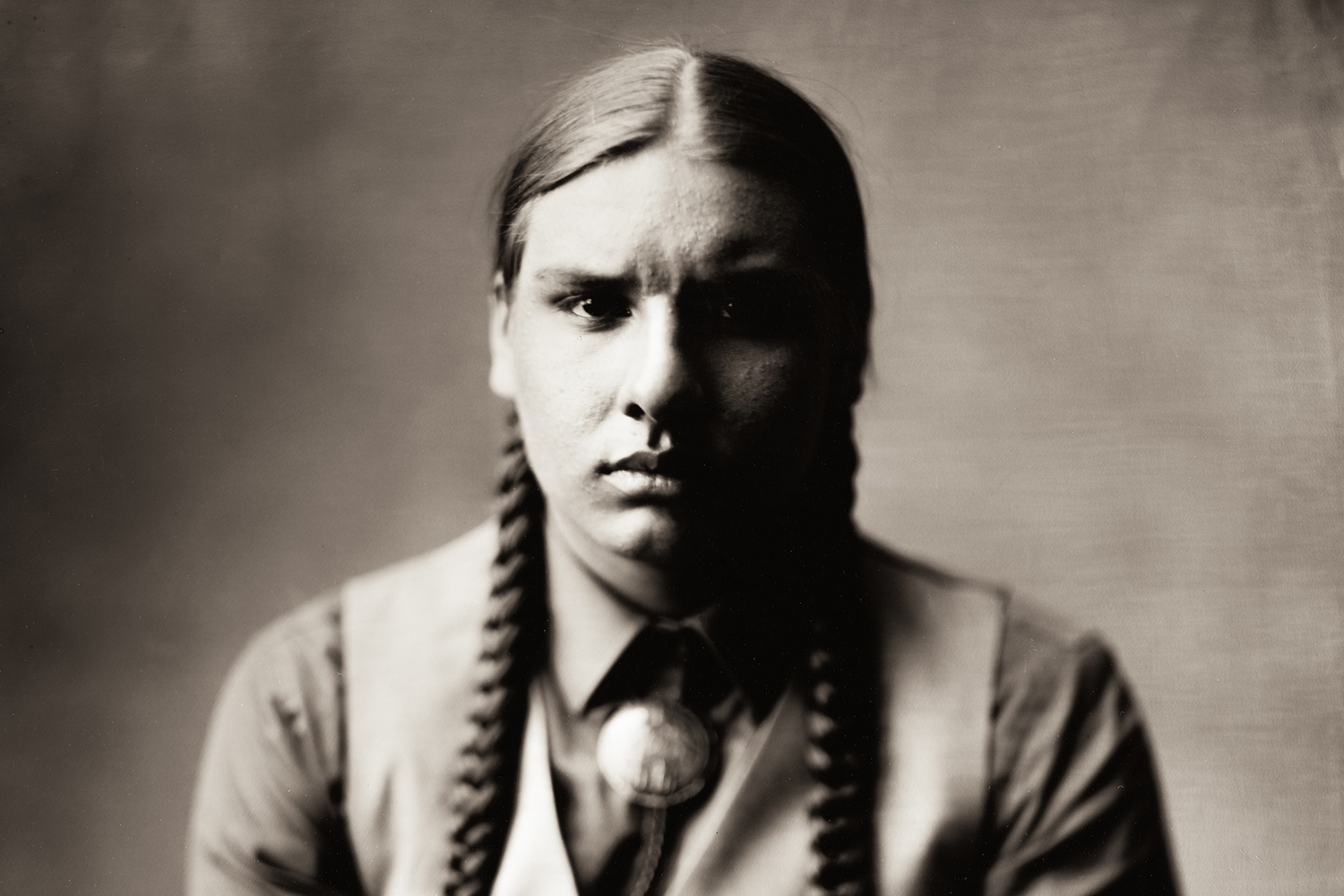 In the second half of the 19th Century, the American West started to be colonised in earnest by American settlers.

The westward expansion of the United States over Native American lands happened just as photography emerged from eccentric experiments into a practical way to document the lands opening up to European exploration.

Wet plate photography – covering glass plates in a collodion solution that will render an image when exposed to bright light – was the most portable way to photograph the land and people. The mythology of the Old West owes at least something to the wet plate images which survive – photography, but with its sepia colouring, stock-still subjects and ethereal out-of-focus backgrounds, dreamlike reminders of days past.

Some of these photographers trained their bulky cameras on the native people whose lands were becoming the frontier. Photographers such as Orlando Scott Goff and Edward S Curtis catalogued the tribes at a time of momentous change.

Some 150 years later, one American photographer is picking up where they left off, documenting 21st Century tribes with the photographic technology of the 19th Century – glass plates shot on an 8×10 camera.

Shane Balkowitsch’s Northern Plains Native Americans: A Modern Wet Plate Perspective is a portrait project of rare ambition: he intends to take wet plate portraits of 1,000 different members of the tribes that live across Montana, Wyoming and North and South Dakota. He expects it will take him the best part of 20 years. He spoke to Kosmo Foto about why he’s compelled to document the tribes in this way.

How long have you been working on it?
I took my very first wet plate of a Native American on 6 September, 2014, that of Ernie LaPointe, the Great Grandson of Sitting Bull. That is the image that started me on this creative path.

How many people are you shooting for it?
My end goal is to capture 1000 Native American portraits over 15 years.  I am on plate #389 as of last week. (See Attached) I am doing a book every 250 images, so there will be 4 volumes at the end of this 1000 image journey, each volume will show my favourite 50 images from the 250 images taken. (The first of these book is available on Amazon)

Describe how you shoot and process the wet plates?
The wet plate collodion process is from the 1848 process invented by Frederick Scott Archer. The final images are of pure silver and I shoot on black glass. I use natural light in my natural light studio to capture these images just as they would have used 165 years ago.

How long does it take to process one image?
I am in my studio every Friday. On a usual Friday I usually make six to eight images all day. To make a proper plate with composition and setup and processing takings about 45 minutes. I can do it in less time, but as with everything, the more time you spend on the composition and lighting the better the image is, so less is always more when it comes to this beautiful process.

Is it fair to say these images evoke the look of colonial times – it’s quite spine-tingling how timeless these images look.
The wet plate process is the only photographic process that I know.  I never owned any sort of camera until my wet plate camera, I took my first wet plate on 4 October 2012, a portrait of my brother. Before that day, I had never taken a photograph with any sort of intent. We are not pretending to take “old time” photographs with the process, we are actually using the same exact process from the Victorian Era, so the images give us what we want to see. These are analogue imagery at its finest.

I noticed your writing on the work of Mathew Brady, Edward S Curtis, and that of Orlando Scott Goff. Do you see these photos as an updating of their work?
I am simply following in these gentlemen’s footsteps.  Brady and Goff used wet plate, Curtis used the later and more simple dry plate process. I would think that all of these previous photographers would be amazed to know that Native Americans and their heritage is still alive today in 2020.

Curtis specifically wrote about capturing a race that will be lost, well guess what Mr Curtis, they are still here, and that makes me happy. I am inspired by previous photographers and use that inspiration but I do my best to make my work, my own and to have my voice and perspective come through.

Do you have any particular favourite images from the series so far?
I have been asked this question many times and my image of Ernie LaPointe, titled “Eternal Field” has to be my favourite for being the first and the fact that Ernie and I are dear friends to this day and he continues to support me on this journey makes that image even more notable in my mind.

It is also the image that knocked down the doors at the State Historical Society of North Dakota for my work as well. They now have over 500 original plates in their archive. All of those plates followed Ernie’s plate. There are 21 different archives now around the world, including the Library of Congress and the Smithsonian that are in possession of my original works.

What has been the response from the tribes of the Northern Plains?
Back in 2018, Calvin Grinnell, the Hidatsa Elder gave me my own Native American name “Shadow Catcher”.  The largest honor of my photographic career.  When my friends come into my studio, they are no longer strangers, but they are my brothers and sisters.

What are you plans in term of showing the work?
I have had multiple exhibitions of my work, the most recent I displayed 144 plates at the Bismarck Art and Galleries Association. In their 25-year history, they had never had such a crowd, it was standing room only, in fact there were so many people that people were pumping into the plates as they hung on the wall. It was crazy. You can see a picture of that event on my site.

Wow! Thanks for sharing this fascinating story. It’s amazing that, without extensive prior photographic experience, Shane Balkowitsch has been able to capture these beautiful portraits.

[…] have people stood dead-centre in the frame, staring into the distance and keeping very still. And yet you can. So besides breaking the mould we should perhaps learn first how to make […]