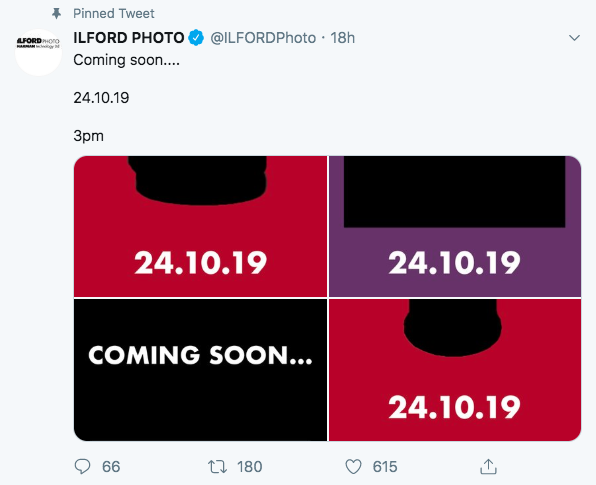 On Monday, the English film producer’s social channels showed a multi-coloured graphic with silhouettes of various film formats, including 35mm and 120.

The film is expected to be announced at 3pm on 24 October, though the time zone has not yet been divulged.

The graphic also shows what looks to be silhouetted 8×10 large-format film and a mystery format which looks to be in 4:3 ratio, Digital Photography Review reported.

There has been much speculation as to what the film will be, though Ilford Photo has given no firm clues.

However, the black-and-white producer has ruled out the return of Ilfocolor, the colour film the company produced from 1948 to 1968.

It remains to be seen whether Ilford Photo will tease any more details before the film is announced on 24 October.

Ilford currently produces a range of black-and-white films in fromats from 35mm to 8×10, including the Delta family of fine-grained films, the 50-ISO PAN F, the infrared SFX 200 and HP5, the film which won Kosmo Foto’s inaugural Black & White World Cup in the summer.