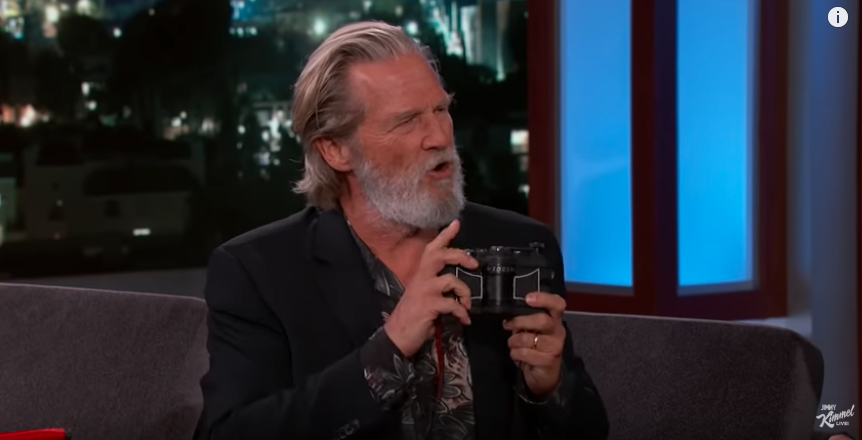 Bridges – who has started in films as diverse as Tron, The Big Lebowski and True Grit – compiled a well-reviewed book of his photography called Pictures, which was released back in 2003.

He’s followed it up with a second volume – Pictures Two – and on Monday he appeared on Jimmy Kimmel Live! On ABC to talk about his photography.

After talking Kimmel through some of the shots – which include some decidedly creepy shots of “extras” on the set of the film Seabiscuit – Bridges took his Widelux out of the bag and asked Kimmel if he could take a shot of him (Check it out in the video below around 7.00)

Kimmel posed for a few snaps by a wisecracking Bridges before the segment ended with the 69-year-old actor taking shots of the show’s audience.

Widelux made a range of 35mm and 120 panoramic cameras with the lens contained in a travelling drum which panned from one side to the other. They remained in production until 2000.

“The thing about these cameras here, especially this one, is I don’t know if it’s come out. They break all the time,” Bridges said.

Bear that in mind if the sight of a Hollywood legend shooting panoramic has you suddenly lusting for a Widelux.