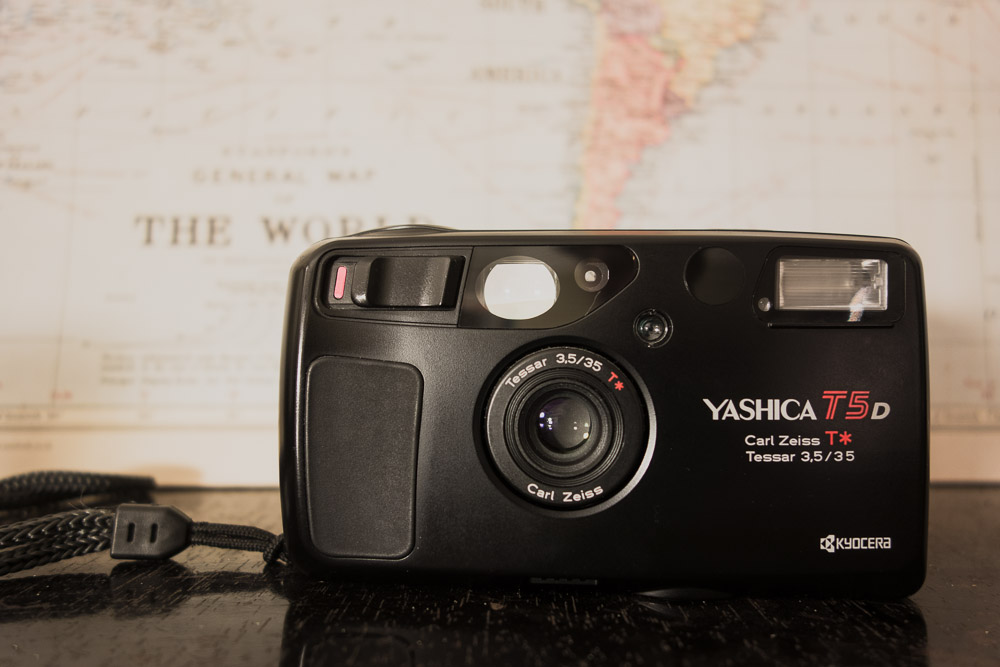 Kyocera could have had no idea what it was doing when it launched the Yashica T4 on the world in 1990.

The T4 was just one of several models in an emerging new genre of cameras – the premium compact. Premium compact today essentially means “pay several hundred pounds for a camera that might fail at any time” but in the 1990s it was a promising market for 35mm camera makers. Both autofocus technology and electronics had advanced incredibly from the first generation of autofocus compacts from half a decade before.

A lot of sophisticated camera could now be squeezed into a very small body.

The T4 followed a trio of compacts in the T family, all of them featuring Carl Zeiss lenses. Kyocera had bought the ailing Yashica brand in 1983. Yashica built everything from no-nonsense SLRs (like the TL Electro) to medium format TLRs (the Yashicamat range) and its incredibly popular family of auto exposure rangefinders, the Yashica Electro 35s.

Kyocera had also bought the rights to the name Contax, a name lauded thanks to a family of rangefinder cameras that rivalled Leica for quality. Essentially, Kyocera’s Yashica cameras would be the more affordable end of the range, with Contax cameras at the higher end.

The Yashica T range, with their plastic, boxy bodies, certainly didn’t exude German sophistication. But they all sported a Carl Zeiss 35mm lens of fantastic quality.

The premium compact scene grew as serious SLR cameras became bigger and bulkier. Camera makers realised there were many photographers who wanted to take quality pictures but didn’t necessarily want to lug nigh on a kilo of camera and lens with them everywhere.

In a way it was harking back to the compact rangefinders of the 1970s, packing seriously good lenses into bodies small enough for a coat pocket, only this time with the bells and whistles of autofocus and built-in flash.

Yashica’s T4, first released in 1992, was one of the first of these cameras to be released. Unlike its clunkier ancestors in the T range, it had a f3.5 lens rather than a 2.8, but the autofocus was considerably better. The lens was, of course, a Carl Zeiss lens, and while it too had a plastic body, it was much more streamlined than its predecessors. As the photography site Anatomy Films says: “While the Yashica T4 will win no beauty contests, the previous models were uglier than sin.”

Like many of its compact contemporaries, the camera doesn’t have a lens cap as such – powering the camera on causes a lens cover to open and the lens to protrude slightly out of the body ready for action. When the camera was turned off the lens recessed back into the camera body and the cover closed.

It didn’t take long for some high-profile photographers to cotton on to the gem of a lens sitting inside this little camera. Fashion photographer Terry Richardson – best known for his provocative fashion work for designers such as Katherine Hamnett and the underground British fashion magazines of the 1990s – used the diminutive Yashica in his shoots. The T4 could be used as close as 30cms from the subject, which also meant it became a favourite for a new generation of street photographers too; especially those who went for the more in-your-face, flash-at-close-quarters approach. Rather than a premium compact for middle-class holidaymakers, the camera was somehow turning into something approaching a semi-professional tool.

Kyocera tinkered with the design, releasing a QD version that printed the date on the negative, and a “Safari” version which swapped the black chassis for a dark green one, complete with a khaki-and-green pouch. Not much use, perhaps, for shooting African wildlife from a distance, but I know one photographer who still raves about the black-and-white images he got from his T4 on a trip to Ethiopia.

Such was its success, Yashica tweaked the design. In 1995 came the T4 Super, or as it’s usually known, the T5. The T5 sported the same Carl Zeiss 35/3.5 lens in a slightly bigger body – weatherproofed so you could take it out into the elements, but broadly the same camera under the hood. One big difference with the T5 was a feature that had also appeared on an upgraded version of the T3, the T3 Super. A small square of silvered plastic took the camera’s view and made it viewable on the top of the camera – a 1990s take on the waist-level finder used on TLR cameras like the Rolleiflex. This made the camera even more attractive to street photographers and those wanting to shoot more unobtrusively. No lifting the camera up to your eyes – just compose with the ‘super scope’ and shoot away.

The next iteration was the T4 Zoom, a T4 boasting a seven-element 28-80 Zeiss zoom lens. The zoom wasn’t a true continuous zoom, but was set at five different focal lengths. Film Advance wrote in 2014: “I would estimate correspond to focal lengths of 28mm, 40mm, 50mm, 60mm, and 70mm”.

Even as digital compact cameras became more versatile and effective in the mid 2000s, the cult of these compact Yashicas only grew. To a generation, they’re the camera that defined a new provocative style of fashion photography. Even as many photographers ditched film cameras of all manner of digital alternatives, the T4 and T5’s popularity started to rise again.

More and more fashion photographers, especially those working for the likes of Vice, started using the chunky Yashicas in their shoots. The price began to rise.

The T4s and T5s share a major features with the rest of their even pricier counterparts – their increasing scarcity. It’s been well over two decades since the T5 was launched, and not far off three decades since the T4 first hit camera stores. Spares are increasingly hard to find, and cameras that develop faults that can’t be fixed get cannibalised to keep others in operation. It’s what’s sending everything from the high-end Contax T3 to the far more ubiquitous Olympus Mju rising higher and higher in price.

One London camera shop owner told me that in about 2005 he had about 20 T5s that he could not sell for even the lowest price – he couldn’t even give them away. They ended up being chucked out. Each one of those cameras, still working, would fetch up to £400 now.

The demand for T4s and T5s has remained high in recent years, buoyed by Instagram and a new generation of bloggers and photographers using it. 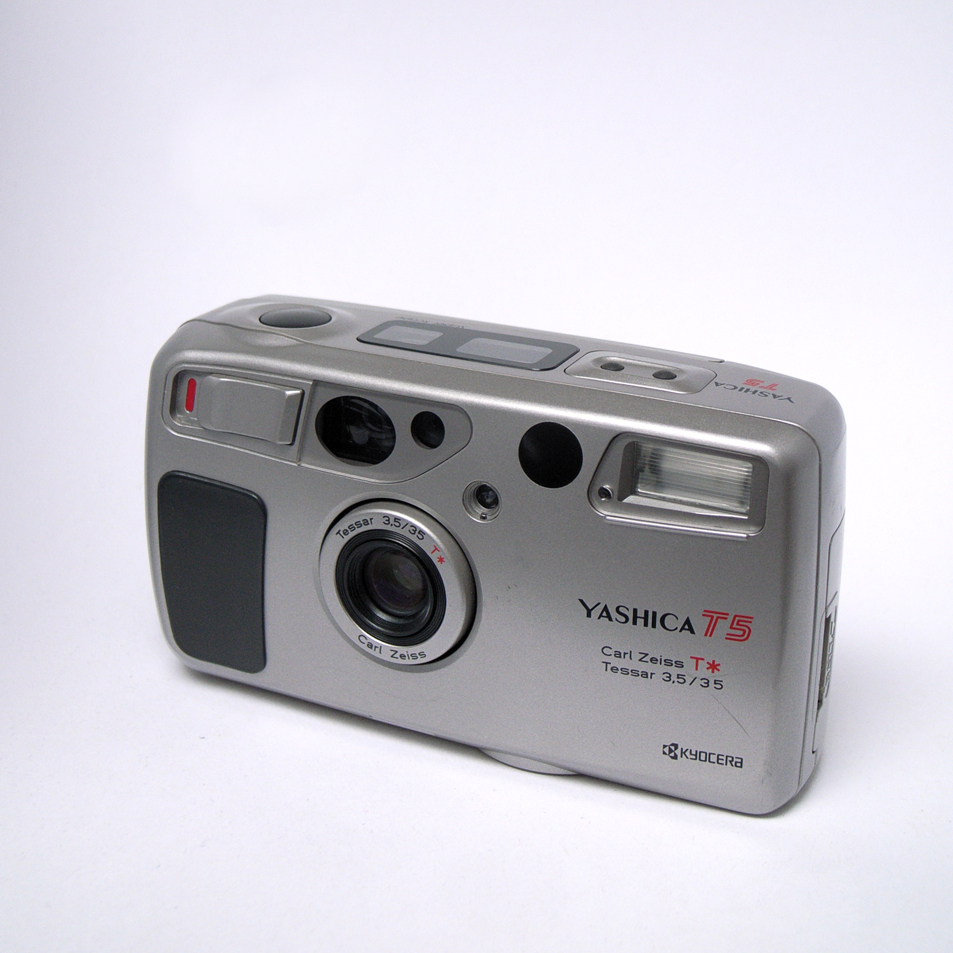 The T4/T5 have been dutifully reviewed and rated by the blogs and film photography websites that have sprung up in the last decade. The consensus is they are great cameras for those looking for a pocketable film compact – the only real issue is the 90s-era autofocusing can sometimes lag a little – but that they aren’t quite the camera their price tags now merit. “While it is a great camera, for a plastic wonder, it’s still overpriced,” wrote Anatomy Films.

Hamish Gill of 35mmc has been impressed with the camera, but not necessarily the price tag. “For those able to somehow find one If you want a point and shoot that you can just point and shoot without thinking then it really is a great camera. Its main issue is of course the cult status that keeps the price up.”

I recently picked up a T1 original “uglier than sin” version as I got it for a good price, I was looking for a simple pocketable p&s with a good lens. I’m currently testing it though I know these cameras from back in the day (I had an Oly Epic in my pocket back then). The lens is super sharp and better than my old Oly, I’m just trying to accept shooting with no manual controls over aperture, s/s etc. so I just point and shoot and forget it. Impressed with the horse photo above by Richard Lambert. All of… Read more »

Bought one new in 2000 and bought a second hand one in 2015 or so (for 5 whole Euros!). I never liked it very much though. The auto focus misses too often, something you don’t want in something you tend to use for snapshots. I switched to an Olympus Mju-II, of which I owned several (all dead now, unfortunately).

Yeah, discounting the vignetting, (which curiously just adds to the “legend”), the lens is REALLY sharp! I’ve only seen a Contax T3 as sharper. The T2 about the same. (maybe a little less microcontrast) So, I was surprised to find a crappy $5 Minolta 110 Date, in the 38mm position, to give it a run for it’s money. The same Minolta used by Ren Hang fo almost all his inside shots. Not sharper,….but? As HCB said,…“Sharpness is a bourgeois concept”. Or just a techie pipe dream? 😁

I’ve had my T5 for more than 20 years, and have always been delighted with it. My only complaints are the noisy motor drive (I’d rather have a manual lever wind, but I do understand that the camera is designed to be fully automatic), and the fact that it rewinds films entirely into the cartridge. That may well have been intended as a “feature”. It is quite robust, having survived many mishaps, including falling down a drop toilet in Bulgaria. I decided that it was well worth retrieving.