Chroma Cameras’ Steve Lloyd said the camera, which is selling for £50 ($67/€60), is “aimed at anyone who wants a tiny, super-light camera that they can literally keep in their pocket”.

He told Kosmo Foto that he had wanted to produce such a camera – which is 3D-printed – for some time.

“I originally designed the Cube approximately 18 months ago, during the early stages of the Covid lockdowns, as a way to keep my mind active whilst struggling with global shipping of materials for my other cameras,” he said. “However, after getting the design almost complete, my materials began arriving so I went back to my workshop and continued building my large format cameras. 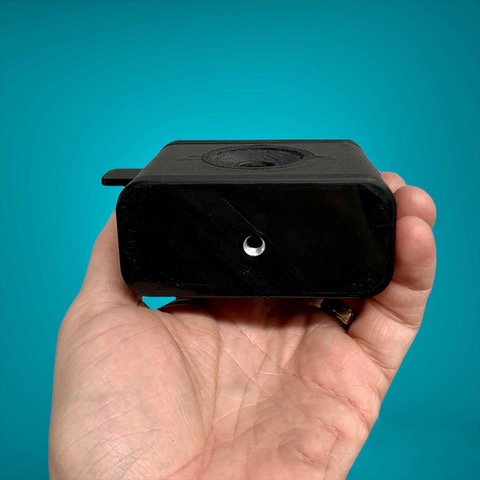 “Moving forwards to 2021, at the UK Photography Show I met lots of photographers on the Analogue Spotlight stand, both brand new and experienced, and one of the most common request was for an analogue camera that they could pick up and use immediately.

“As much as they liked the idea of getting into large format photography, the requirement to source their own lenses/film holders was often a challenge. This got me thinking about how I could help those photographers get into analogue photography, without needing to build up their kit, and the pinhole camera is a perfect way to do that!”

The camera measures just 84mm wide and 68mm high and weighs only 156g.

Lloyd said that he got back to his initial design after the show, “focusing initially on the winding setup, and how to design a system that ensures consistent frame spacing without complex gearing.

“As my whole design ethos for the Cube was simplicity, to both appeal to new analogue photographers and to allow me to make it an affordable camera, I’ve integrate a sprocket counting design which has a very simple indicator wheel on the back. When winding on the film, the wheel rotates with each sprocket hole, until a marker shows when to stop winding.

“This design also gives the photographer the creative freedom to take multiple exposures, being able to wind the film forwards/backwards as required.”