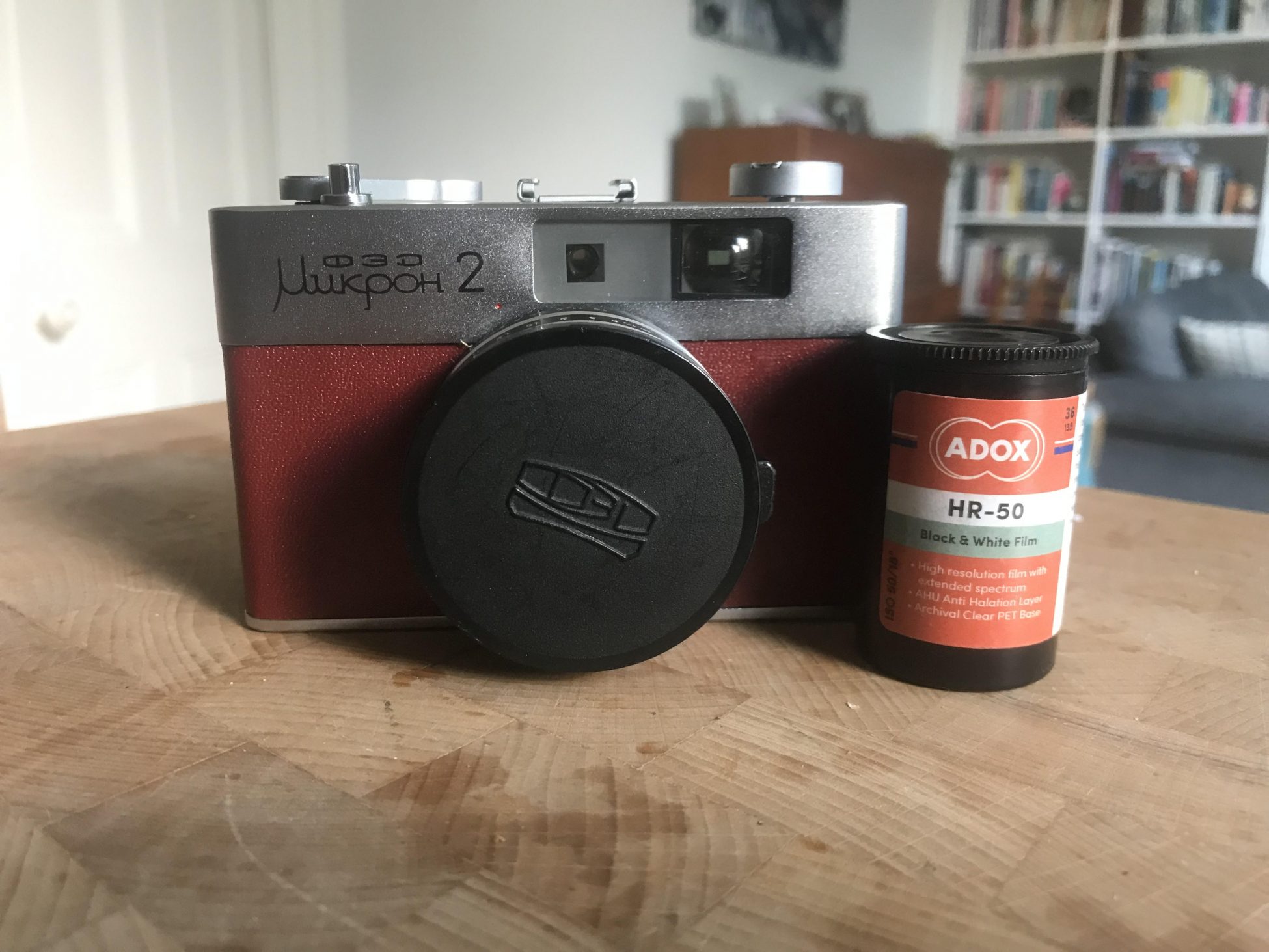 What was the first company to make photographic goods? If your first thought was Eastman Kodak…. Close, but no cigar.

The first company to bring photographic materials to market was Fotowerke Dr. C. Schleussner GmbH based in Frankfurt Am Main, which started selling them in 1860, a full 20 years before George Eastman’s Kodak started. It’s better known by the name used on its cameras and film – Adox. And it’s a name that still lives on today.

Adox made wet collodion materials and the world’s first x-ray plate before selling cameras (made by other companies) under the Adox brand, and then releasing a line of black-and-white films in the 1950s.

Adox was then sold to the US chemical giant Dupont in the 1960s and later German film maker Agfa; along the way it lost its film production line, which was sold to Fotochemika which made Efke film in then-Yugoslavia. In 2003, however, the rights to Adox’s name lapsed, and this pioneering name in photography returned to film production, thanks to Berlin-based photographic importer Fotoimpex, which specialised in bringing East European photographic supplies to the West.

The new Adox began by buying Efke films – made on the original Adox film line – before setting up their own factory in Baad Sarrow, near Berlin, using machinery bought from Agfa and Forte, another Cold War film manufacturer from Hungary. They also lease a photo paper and film-coating machine from Ilford Imaging in Marly, Switzerland. The brand has gradually increased its range of films, several of them based off Agfa-Gavaert emulsions such as Aviphot.

Adox’s films have never been household names like their Kodak or Ilford rivals, but with each year are becoming better known as their range increases. They’ve found a particular niche for those wanting extremely finely grained films.

Adox’s Mirko Bödekker sent me a bunch of the brand’s film for a prize for those taking part in Kosmo Foto’s Black & White World Cup back in 2019, with a few extra rolls for me to try. Amongst them were a few rolls of HR-50, first released in 2018, which have been sitting in the fridge ever since. These First Roll posts are a perfect excuse to shoot stuff new to me, so when the first Kosmonauts photowalk of the year came around in June, I made sure a roll of HR-50 was in the camera bag.

For this walk, we were exploring London’s famously Brutalist Barbican before wending our way through the fringes of the City of London down to the Thames’ South Bank . The spring light was strong enough to shoot at ISO 50, so I loaded the HR-50 into a camera that’s been my real discovery of 2021: a FED Mikron-2.

Even after 20-odd years of collecting (and using) Soviet cameras, there’s still surprises like this in store. The Mikron-2 is essentially a copy of the much-loved Konica C35 rangefinder of the 1960s and 70s, right down to its aperture-priority Auto mode and its fastest shutter speed of 1/650th of a second. The original Mikron was a half-frame cameras inspired by Konica’s earlier half-frame camera inspired by Konica’s Eye, so clearly someone in FED’s design bureau was a Konica fan.

The Mikron-2, which inspired the later FED-35 and FED-35A cameras, swapped the original Mikron’s selenium meter for a battery operated one. It’s a small but chunky compact rangefinder made for auto-aperture shooting, just the kind of thing that’s perfect for photowalks around a city.  Its secret weapon is the lens it shares with most of this FED family; the Industar-81, a 38/2.8 semi-wideangle lens that’s sharp and contrasty.

It’s become one of those cameras I automatically reach for over the summer.

A lot of the example photos I’ve seen of HR-50 show relatively restrained grain (Jim Grey’s post on this film shows some nice sharp suburban street shots taken on an Olympus OM-1) but my experience was definitely different. The Mikron-2 can overexpose a little with strong backlighting, and the scans initially showed some blown out highlights. The good things is, a little exposure tweaking in Lightroom dragged back all the detail. The results? Exactly not what I was expecting for a 50-ISO film, but just the kind of thing I love. 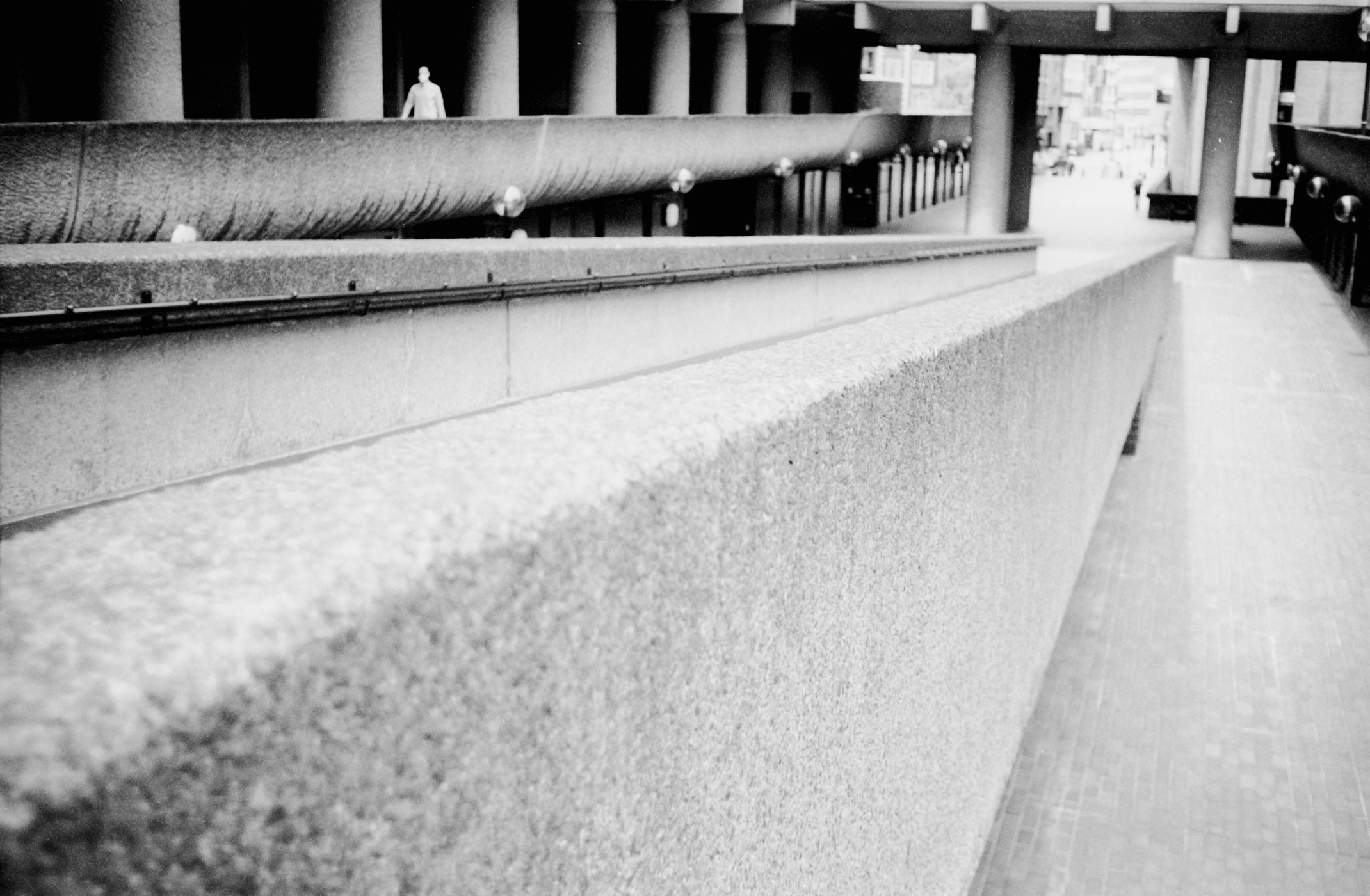 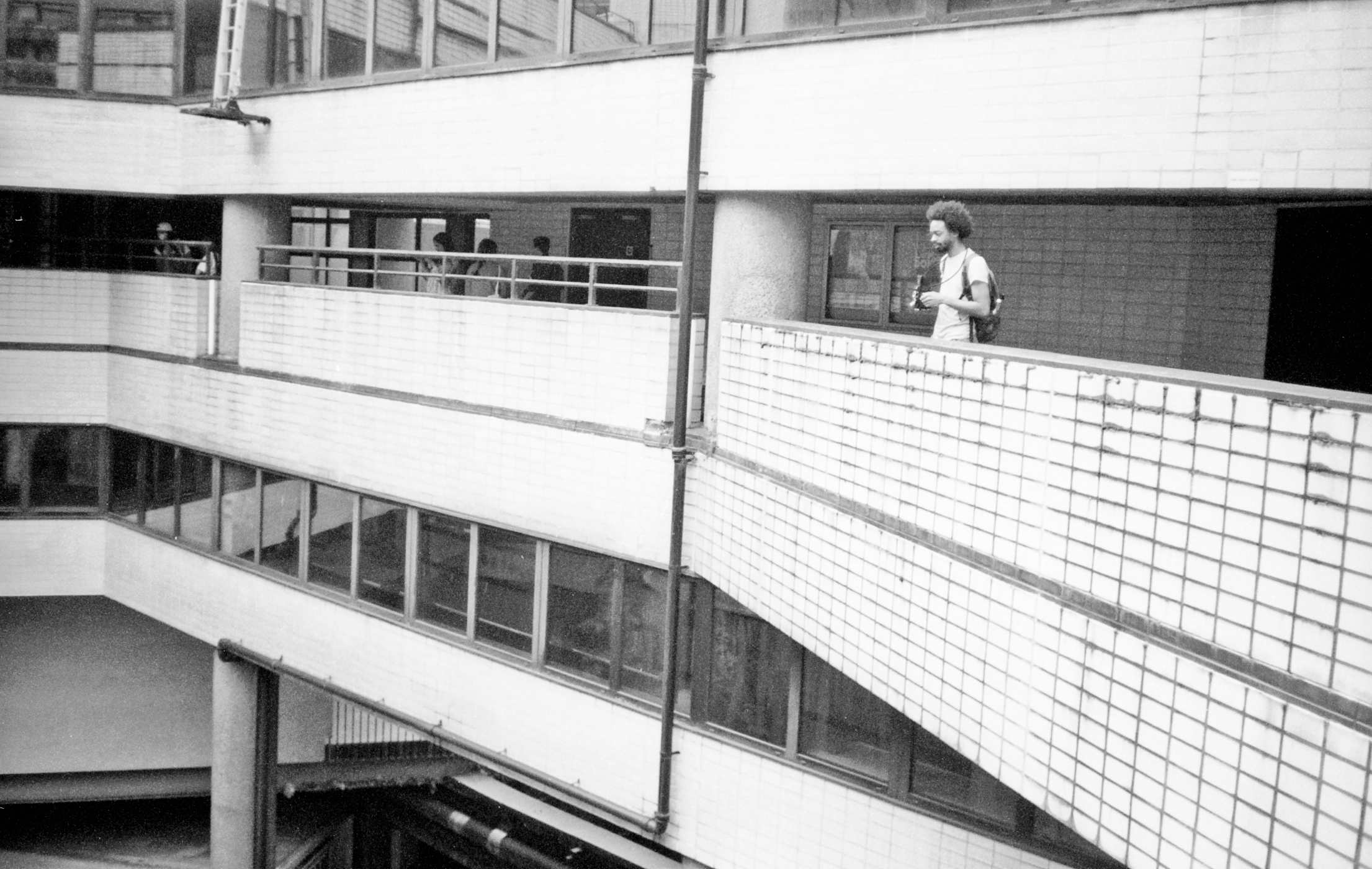 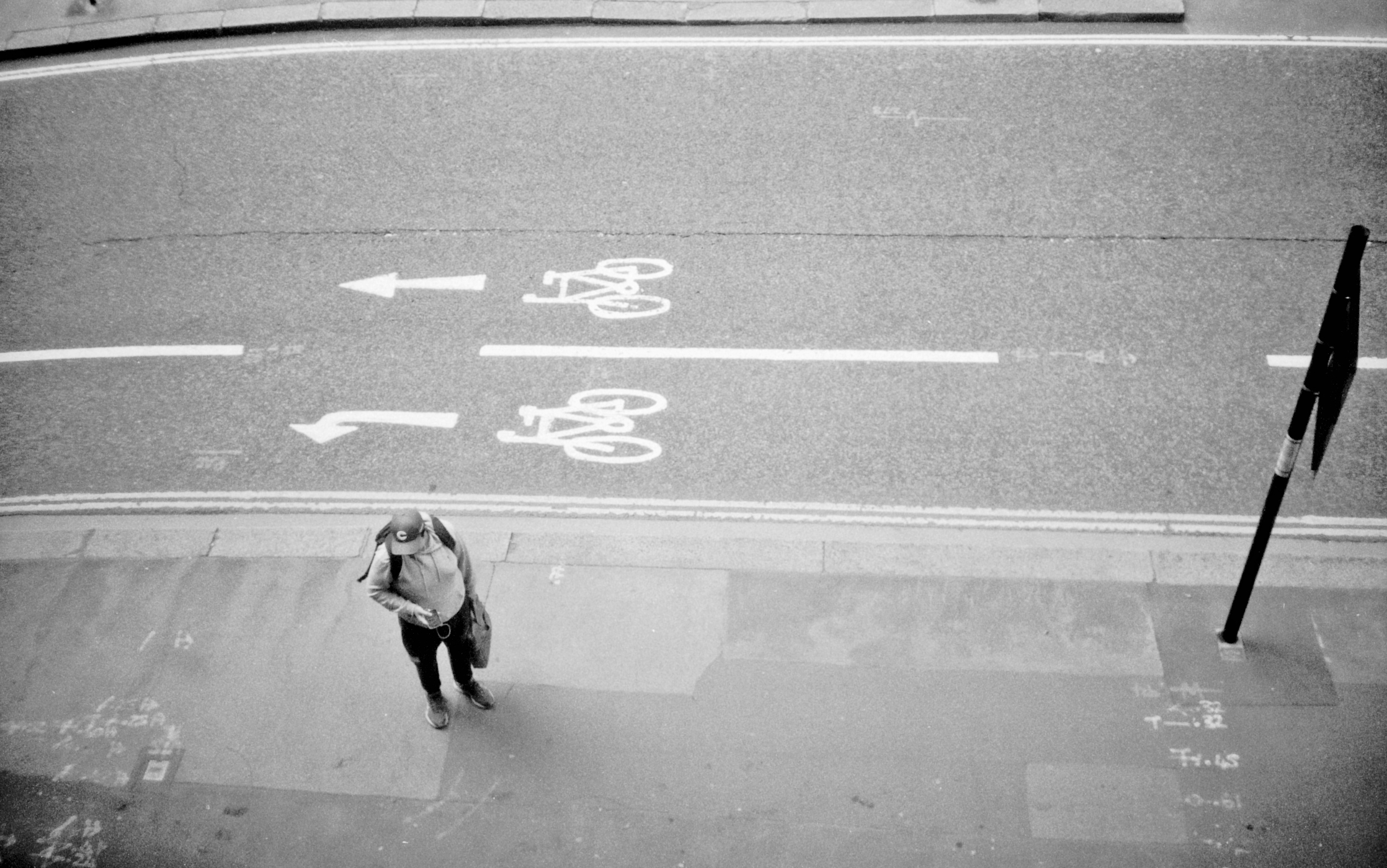 This roll of HR-50 probably shows more grain than some would like, but for me it’s exactly the kind of look that suits the concrete-heavy surroundings. The film captures a really broad range of tones, even when overexposed, as you can see in this shot of a woman catching a short cigarette break: 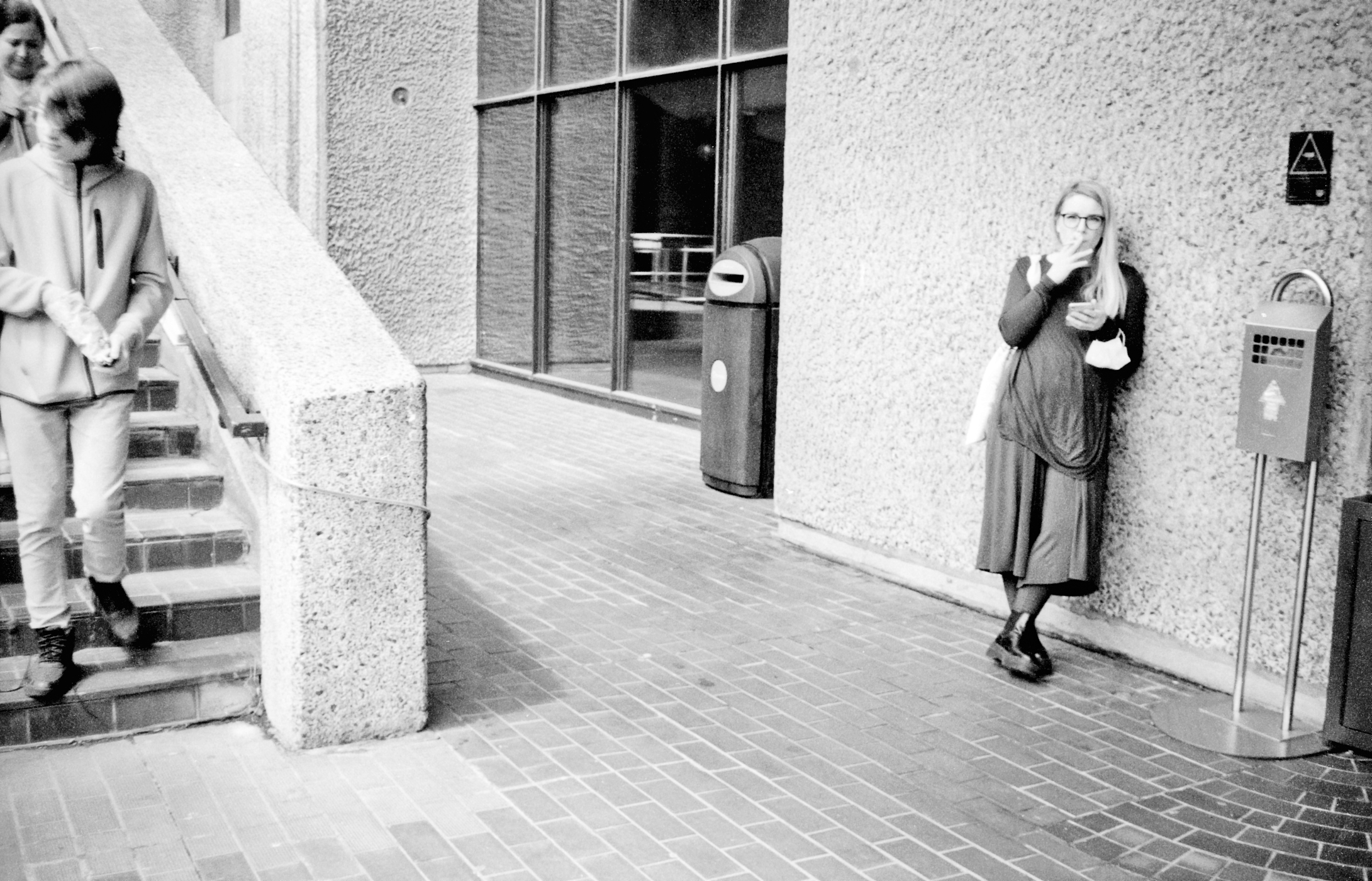 My personal preference is for more noticeable grain in black-and-white, so be aware that I have tweaked these post-scanning with that in mind. But for me, HR-50 might be a new favourite for summer street photography in sun-bleached climes.