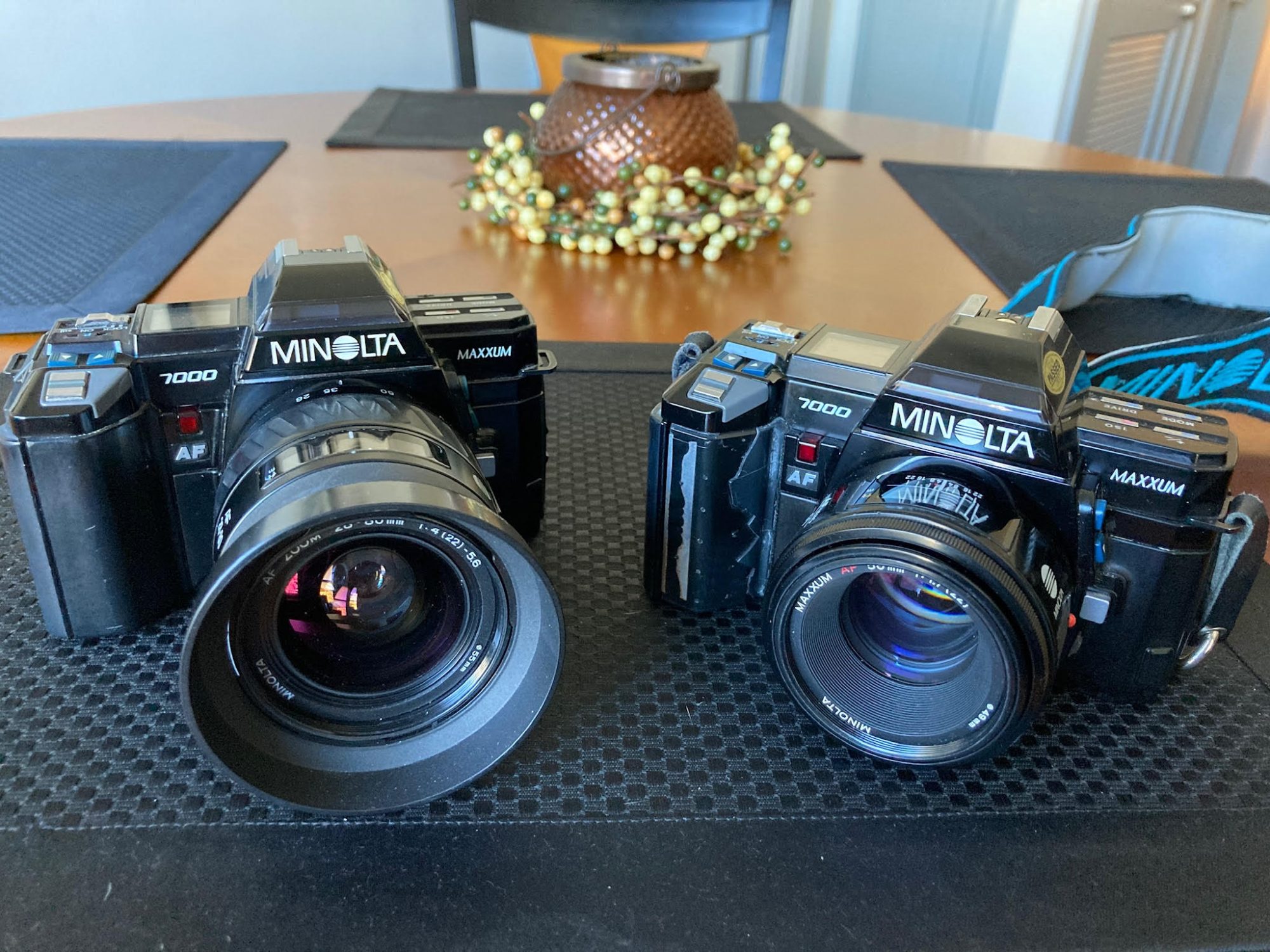 I am NOT a camera collector.” At least that is what I tell people when they see the numerous and various cameras sitting on shelfs in my condo. “I buy cameras to get the experience of using them, and I enjoy having such a variety from which to choose,” I add. And it’s true. With a few exceptions, I will sell or give away cameras I don’t use. However, some recent experiences I have had with some of my vintage SLR cameras have led to consider using one particular camera more than the others, if not exclusively, and that camera is my Minolta Maxxum 7000.

First, some background:  My first serious camera came in the fall of 1980. It was a Minolta XG-1, which I purchased with my first teacher paycheck, having just graduated from college the previous spring. Like all SLRs at the time, the XG-1 was a manual-focus camera, and soon the act of focusing the lens became second nature. All of my subsequent SLR cameras were manual focus as well, even though the pages of my photography magazines will filled with adverts for autofocus SLRs.

Maybe it was the extra expense that kept me from wanting one, but I think also that I was a little biased against the idea of autofocus. Perhaps I felt like “real” photographers should focus their cameras without assistance. Sure, I missed the focus occasionally, but most of the time I got it right.

Fast forward to 2018. I am in my “GAS” (Gear Acquisition Syndrome) phase, having returned to film photography the previous year after a 10-year period of shooting mostly my digital point-and-shoot camera. I was seeking out cameras that had some personal importance or historical significance, usually after having read about them online. One camera I definitely seeking was the Minolta Maxxum 7000. Why? Because it was the world’s first autofocus SLR camera body (The Polaroid SX-70 Sonar from 1977 is an autofocus single lens reflex instant camera, but that is a story for another day). 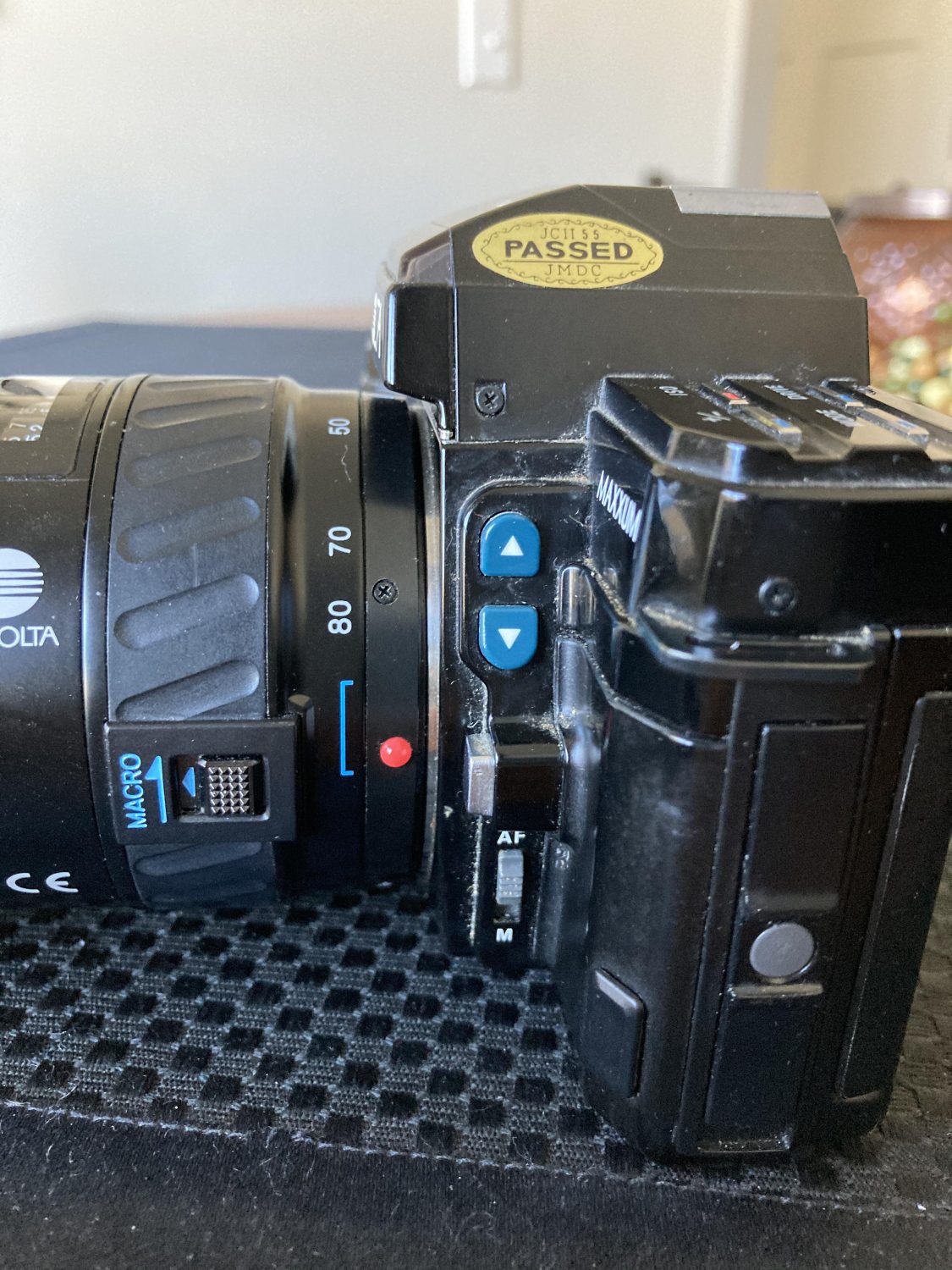 Ironically, it didn’t take me long to find one, as I found a working example with a clean Minolta AF 50mm f1.7 lens in a nearby antique store for only $20. I immediately took it to the elementary school where I taught and began using it to shoot photographs for the school yearbook. I put dozens of rolls of film through it and captured moments with students in their classrooms and on the playground.

Introduced to the world in 1985 as “The World’s Easiest SLR,” the Minolta Maxxum 7000 was a remarkable camera for its time, and in many ways it the logical extension of the last manual-focus SLR Minolta ever made, the X-700 (a camera which I owned and greatly loved.) It included improved versions of the X-700’s program, aperture priority, and manual exposure modes as well as through-the-lens flash metering, touch switch, and hand grip, while adding not only autofocus, but shutter priority mode, motorised film transport, and a very bright viewfinder with LED display of visually all exposure mode, focus, and drive information.

The biggest break from the X-700 (and virtually all other previous SLRs) was how the camera is operated. Instead of the traditional dials, the Maxxum 7000 uses four top placed buttons and two sets of up/down buttons to set the camera. This can be as simple as setting the exposure mode to Program and then shoot away, allowing the camera to choose aperture and shutter speed while it also focuses the lens. In Program mode, the Maxxum 7000 becomes a hefty but highly accurate point-and-shoot.

If you want more control over the camera’s settings, then you would choose either Aperture or Shutter Priority Mode and then use either set of up/down buttons (one set near your shutter finger and the other on the left side of the lens where your “focusing” thumb would be) to dial in your desired aperture or shutter speed. For complete control, the mode would be set to Manual, and the aperture is set with the left thumb up/down buttons while the shutter is set by the right shutter finger up/down buttons.

If this button-centric user interface seems complicated, remember that you get real-time information as you make these settings in the viewfinder. This is where the Maxxum 7000 is so intriguing. The buttons are so well-placed and the viewfinder so informative that, once your fingers are trained to know what to do (which takes very little time) you never have to take your eye off the viewfinder. It is very much like touch typing. Your fingers eventually feel at home on the camera, and your eye stays on the subject. I actually think that the buttons operate faster than traditional camera dials.

When I fired the shutter the first time I couldn’t help noticing how smooth it is. It may have less shutter and mirror vibration than any SLR I’ve ever owned. The motorised film advance is quick, and while you certainly can hear it, it’s not obnoxious at all. I think it sound cool. The camera body itself feels solid to hold, and grip feels good in the right hand. It’s built of a heavy plastic, but it doesn’t feel or look cheap. At 555 grams (1.2lbs.) without the lens or batteries, it’s not a burden to carry around. And speaking of batteries, the cameras runs on four ever-available fAA batteries.

But what about the autofocus? The answer is that it works as advertised, but be advised that this camera was the first of its kind. Its single beam autofocus system has been greatly improved upon both in regard to speed and accuracy since release in 1985. I don’t find the focus to be slow, but under certain situations it can be confused by fast moving subjects. I wouldn’t recommend it for sports photography, but then again was it slower in 1985 than manually focusing the lens? With pros, probably yes, but with me probably not. 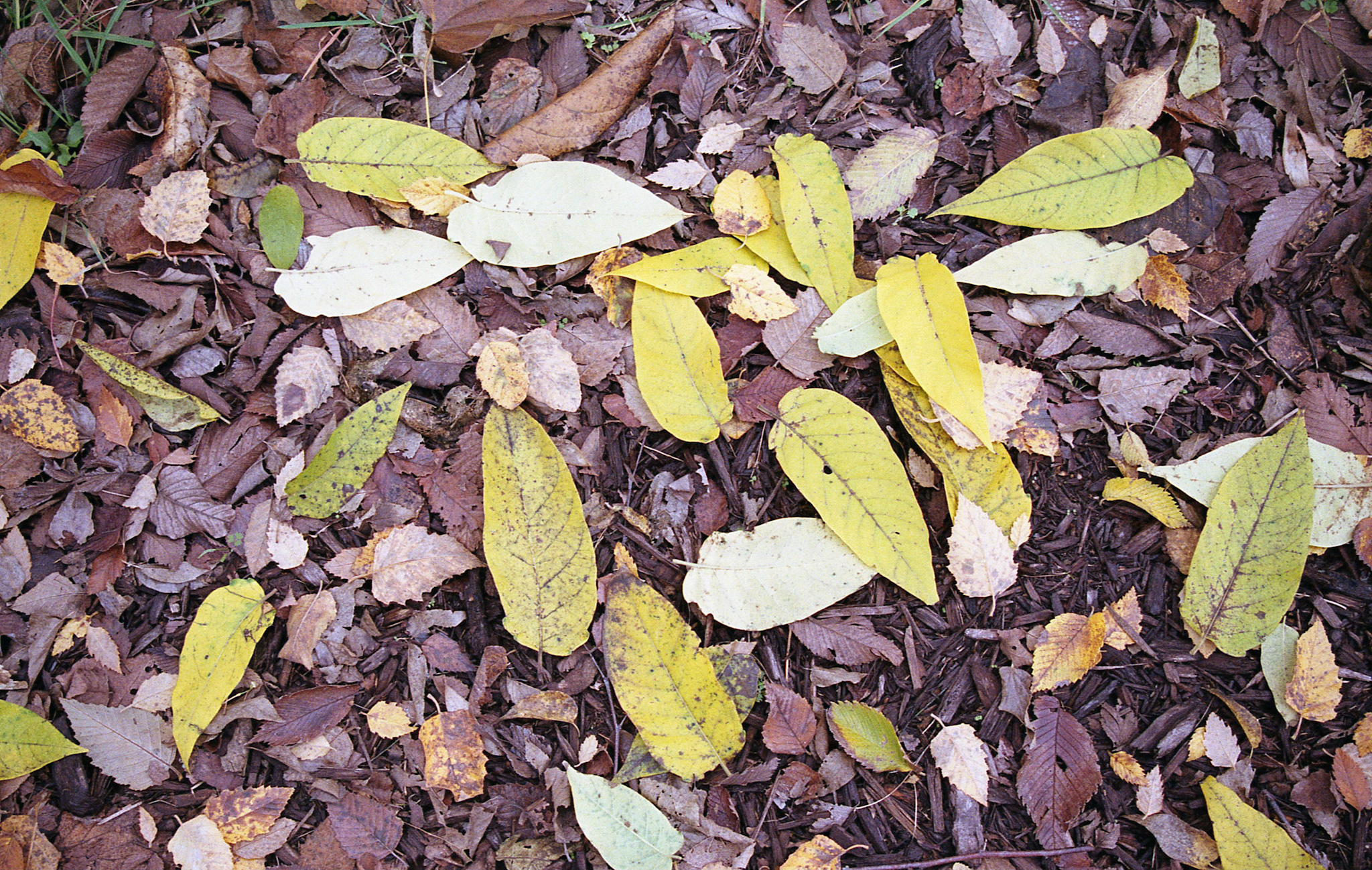 In certain situations it might be best to turn off the autofocus (which is done with a switched easily reached by your left thumb) and focus the lens yourself. However, you are not totally on your own when you do this, as a green LED lights up when whatever it is you’re pointing the lens at is in focus.

When Minolta released the Maxxum 7000, it introduced a new line of lenses for it, all of which used a new mount called the “A” mount (it will not accept any of Minolta’s previous manual focus lenses). While the most common lenses are quite obtainable today, some of them are in high demand and command a high price. The reason is that modern mirrorless cameras by Sony have the same “A” mount, and users of those cameras like to use the vintage Minolta AF lenses on them, especially prime lenses in certain focal lengths like 35mm, 85mm and 100mm.

However you do not have to spend a lot of money on good lenses for the Maxxum 7000 if you are willing to use a zoom lens instead of a prime. I have a 28-80mm f4-5.6 zoom that gets the job done and lenses like this are plentiful and cheap.

Remember I began this article by referring to some experiences I have had with my manual focus SLR’s lately? My 62-year-old eyes don’t see as well as they used to, and my eye doctor tells me that I have the slight beginnings of a cataract in my right eye, the one I use to look through the viewfinder. I’ve noticed that I have been missing the focus a bit more than I used to. Since it’s not going to get better, I have decided that I should be using an autofocus camera more and reduce the chance of missing photographs that can’t be made again.

Recently I loaded up the Maxxum 7000 with some Kodak ColorPlus 200 and went looking for some autumn and Christmas colors to see if I could be comfortable with the idea that this could be my main camera. It worked great, just as it had done with those school shots. I even found a second body for sale near me ($10 this time) and made some photographs around town with some Kodak Tri-X 400.

In time, I may even get rid of a bunch of manual focus SLRs and just use my two Maxxum 7000’s. After all, while I enjoy the experience of using a variety of cameras, it’s the photograph that matters. I believe the more I use the Maxxum 7000, the more I will become “at one” with it and let it to take my photography to the max.