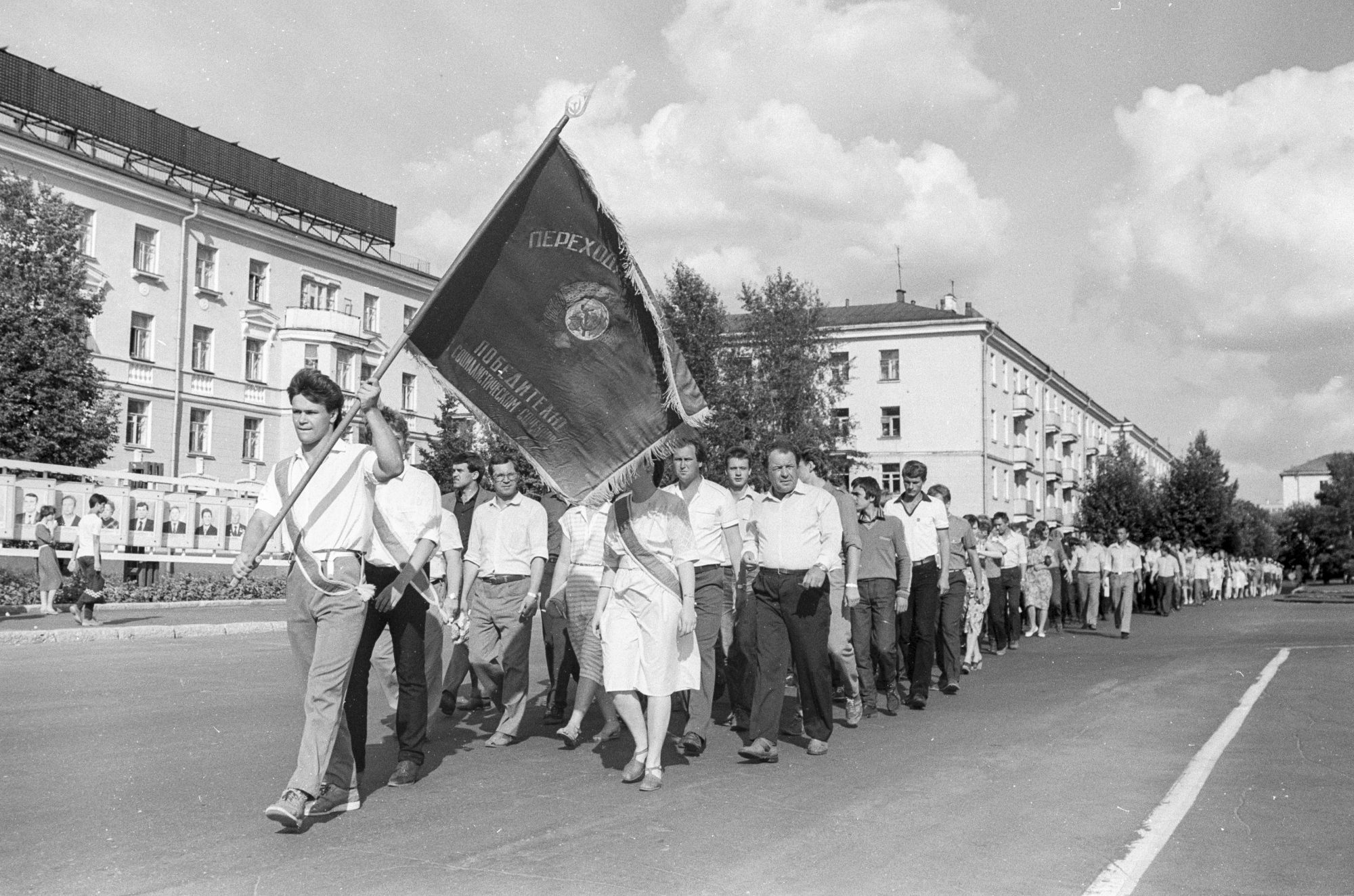 To understand, what exactly was photography in the USSR, you must know, that any entrepreneurial activity was strictly forbidden here.

Earning money by selling photographs bypassing the state trading network was a criminal offence. That’s why all pro photographers in Soviet Union had to be employed any way. Officials could send to jail every unemployed person for “parasitism”, but if that person also earned money illegally, he automatically became a criminal.

There were several possibilities for employment as a photographer: municipal photo studio to make ordered portraits, palaces of culture to shoot amateur scenic activity, theatre photographer, technical photographer for a large factory, law enforcement or court photographer or, at least, as a photojournalist.

It’s strange, but if you read dedicated literature or periodical of that time, you’ll discover, that in USSR only photojournalists were rated as a professional photographer. Those who made studio portraits, were regarded as household services, like laundries and barbershops. Theatrical photographers were listed as a supporting personnel. All the others were employed as darkroom assistants.

If you managed to receive one of these positions you would start to earn money besides your official wages, but take care! Professional photographers were all in the spotlight of KGB.

Earning money by selling photographs was a significant parts of the Soviet underground market. Some unlucky professionals were jailed, but most of us a little wealthier than the average citizen. One of most popular stories between us was about one earned millions by selling in trains thousands of copies of a portrait of Vladimir Vysotsky with his sweetheart Marina Vlady.

This classic picture by Valery Plotnikov was not allowed for official replication, because the very famous singer and actor Vysotsky was in opposition to Soviet power. But most citizens loved his honest songs and were happy to buy a picture. Photojournalism was the thing from a different world for most of us, living in small cities without own media.

In my previous article I wrote about poor quality of Soviet photographic equipment. Some readers love these cameras and it is hard to believe for them, that the gear was so bad. But camera quality for domestic market and for export was quite different.

Let me use this example from the end of the 1980s. One day, my friend (also a photographer) called me to tell by phone: the only photographic store in our city (actually a sports supplies shop which also sold photographic gear for tourists) received a consignment of Kiev-19 SLRs.

“Let’s go and buy one before a lot finished,” he told me. I instantly finished all my activity and went to the shop. All our colleagues were already there, lined up in front of the trader.

“The exposure meter does not work in all cameras. Do you still want to buy?” the trader asked.

“Any additional malfunctions?’ asked one of us.

Half an hour later all the camera had been sold. We were happy to buy any camera capable of taking pictures, and a damaged meter was a funny disadvantage for us. The next consignment could go on sale a month or more later, but with the same or different malfunction, there were no reasons to wait.

Cameras for export differed from ours. Few defective cameras made it abroad, but all the damaged were intended for us. There was no competition inside the Soviet Union, so all of these cameras were sold, except the most outdated. Selling damaged cameras brought with it too much risk.

To be clear – there were no separate assembly lines for export or domestic production in the camera factories. All OK cameras were packed abroad, and all the others were guide to domestic traders.

This picture above was taken at a largest photographic equipment store in our region: ‘Fotolubitel’ in Gorky city (now Nizhny Novgorod, and now the camera shop has been replaced by a Chinese restaurant). You can see a rich choice of cameras and lenses, available for any buyer. But if you compare price labels to average wages, you realise this gear was too expensive.

The monthly wage of engineer (a little bit higher than the average citizen) was 120-140 roubles. It was very hard to pay even 100 roubles for a Zenit-E. The 500 roubles lenses for mid-format Kievs were absolutely unavailable for ordinary amateurs and even for most pros. This gear was supplied to institutions, like factory photographic labs, newspaper editorial offices and municipal portrait studios for cashless payments. This was the richest gear shop in all the region. Small towns didn’t have the same kind of choice on the shelf. Most gear like this was in a private use of pro photographers, which received cameras and lenses as part of their job. If you have good relationships with your bosses, you can use that gear for everything you need.

Poor camera choice was not a great problem, some of them we fixed ourselves. Some were cheap enough to disassemble for spare parts if they got damaged. We had quite good lenses, although did not know that at the time.  A more serious problem was flash photography. In fact, before the mid 1990s, it was almost impossible to buy automatic flash. But more awful than that was the necessity of continuous flash connection to an AC-power socket!

Autonomous flash units with DC power, common in all over the world after sixties, were not available in the Soviet Union. So it was a typical view of a photographer, fastened to an AC socket by the long power cord. The dangerous and heavy 330-volt battery ‘330 ЭВМЦГ-1000 Молния’ (Molniya) was the only alternative to a wall socket a long time. But it was absolutely impossible to buy such a battery at shop: all of them were distributed to state companies for employed photographers.

The first soviet flashes with low voltage DC power appeared in the mid-1980s, and were equipped with Ni-Cd accumulators, mounted inside. It was not interchangeable, and when the battery charge became weak, the shoot was finished, because of necessity to recharge the unit entirely. Even such flash units were very hard to find and almost impossible to buy it at a store.

All store showcases were full of flashes with AC cord, useless in pro photography. Good electronics was one of most weak point of Soviet industry, but any DC-powered flash unit needs relatively complex transistor voltage converter. I don’t remember, how did I got my DC-powered flash ‘Elektronika V5-24’. But it served to me many years, and finally fell apart, all the plastic corners erased. The next possibility to buy decent flash unit happened several years later only.

My Elektronika didn’t need AC-power socket when shooting, but it had no way of adjusting the intensity of the flash. The unit had a high guide number, about 22, and emitted all the power at every actuation. Shooting close objects forced you to shut the iris down to f/22 or even more. As you may guess, the background appeared almost black in such pictures. But I was still proud of my flash, because just a few photographers in my city could shoot in a dark far from AC socket and even at the street. My next flash was cheap Chinese unit, powered with AA-size Ni-Cd batteries and with rotating (unthinkable for Soviet flash!) head for bounce lighting. But this purchase became possible only after 1991 when the Iron Curtain fell and foreign goods appeared at domestic market.

Batteries, meanwhile, were always Japanese and never Soviet. Reliable power source was a great problem in the USSR. Soviet industry produced AA-size Ni-Cd batteries НКГЦ-0,45 but their power level was extremely low – even then, it was almost impossible to buy this ‘miracle of technology’. My batteries with hieroglyphs were bought at the market in Leningrad for $20. This was my first foreign currency fee for a picture, almost a week’s wages that time.

A Chinese flash loaded with Japanese batteries became my first alternative to my awful Soviet brick, always making a white pancake instead of the subject’s face. About this time at 1993 I upgraded the cold shoes on my Zenit-Es to hot: the Elektronika was equipped with PC-cord, but Chinese flash did not have one.

Modern automatic flashes first appeared in my bag when I got a Nikon F3 kit from TASS agency in 1996. It was lucky ticket, but most of my fellow pros got access to modern flash units later, after 2000.

I really enjoyed reading this. I wasn’t aware of the situation behind the iron curtain. Very informative.