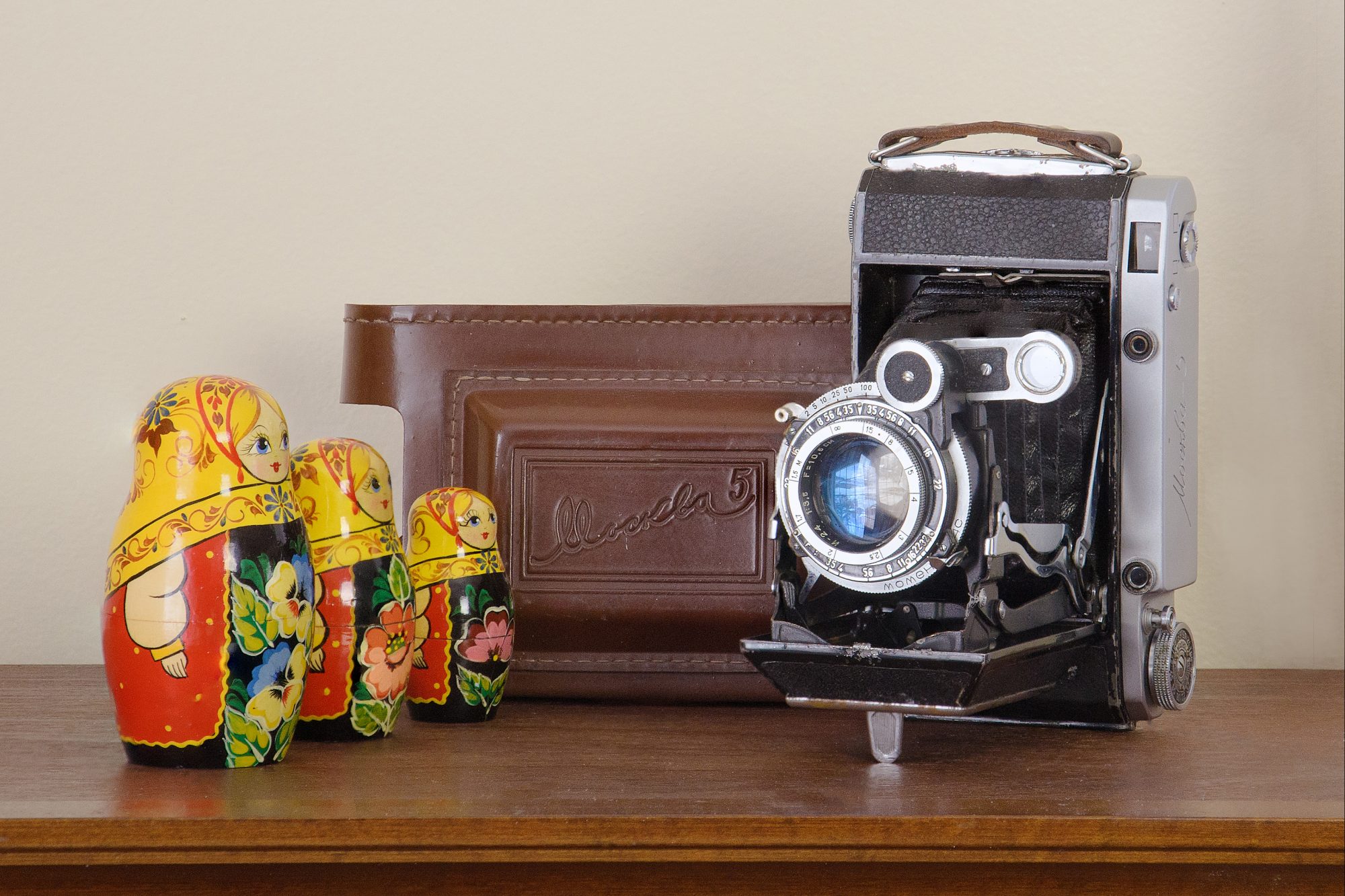 The Moskva-5 is my first Soviet camera, but I have to admit that I wasn’t exactly yearning to have one. I have a small collection of German folding cameras, and I really wanted the post-war Zeiss 6×9 Super Ikonta with a rangefinder. They are uber-expensive. The Moskva-5, a 6×9/6×6 folder made by KMZ, came up online at a good price and looked in good shape, so I decided to play Russian roulette.

The Moskva series started out as more or less straight copies of the Zeiss 6×9 Super Ikonta, but with the Moskva-5, KMZ departed somewhat from the German design and designed the top deck with an integral viewfinder and rangefinder windows, in the 1950s fashion. The rangefinder mechanism is still the classic Zeiss design with all the moving parts up on the front standard including the characteristic flip-up monocle holding the rotating prisms.

It seems fitting that my camera arrived in the coldest part of the winter. Ottawa is one of the coldest capital cities in the world, along with Moscow. Just to make the camera more at home, I arranged some matryoshka to welcome it (see above).

Compared to my 6×9 Zeiss Nettar (a non-rangefinder) the fit and finish of the Moskva is not quite as nice, but not shabby either. My unit was made in 1959. The unchromed metal is of decent thickness, solid but not overly heavy, and the surface covering seems to be pigskin. The camera came in a heavy leather ever-ready case with the longest neckstrap I’ve ever seen. Even buckled up to the last hole, the camera droops below waist level when slung around my neck. Perhaps it was intended to fit over those heavy red army winter coats with thick lapels.

Like Zeiss ever-ready cases, the top of the case is attached permanently with a rivet rather than a snap, so it dangles when using the camera. I hate that. Other minor annoyances with the design are the uncommon 3/8” tripod threads and no accessory shoe on the top plate, despite expansive space. The user manual cautions that one should not change shutter speeds on the Moment-24C shutter after it is cocked; that is the opposite of the operation of some other KMZ cameras like the Zenit.

On the top deck there is a film-type reminder dial in Cyrillic inset on the top of the winding dial, and a tiny window showing a red dot when the film has been wound on and not yet exposed. The viewfinder is average for cameras of this era; it’s a little hard to see the corners with my glasses on. The placement of the viewfinder on the right-hand side of the camera, from the back, means that the rangefinder monocle on the front standard, when unfolded into position for use, intrudes into the left side of the viewfinder image. The rangefinder image is magnified and has good contrast. 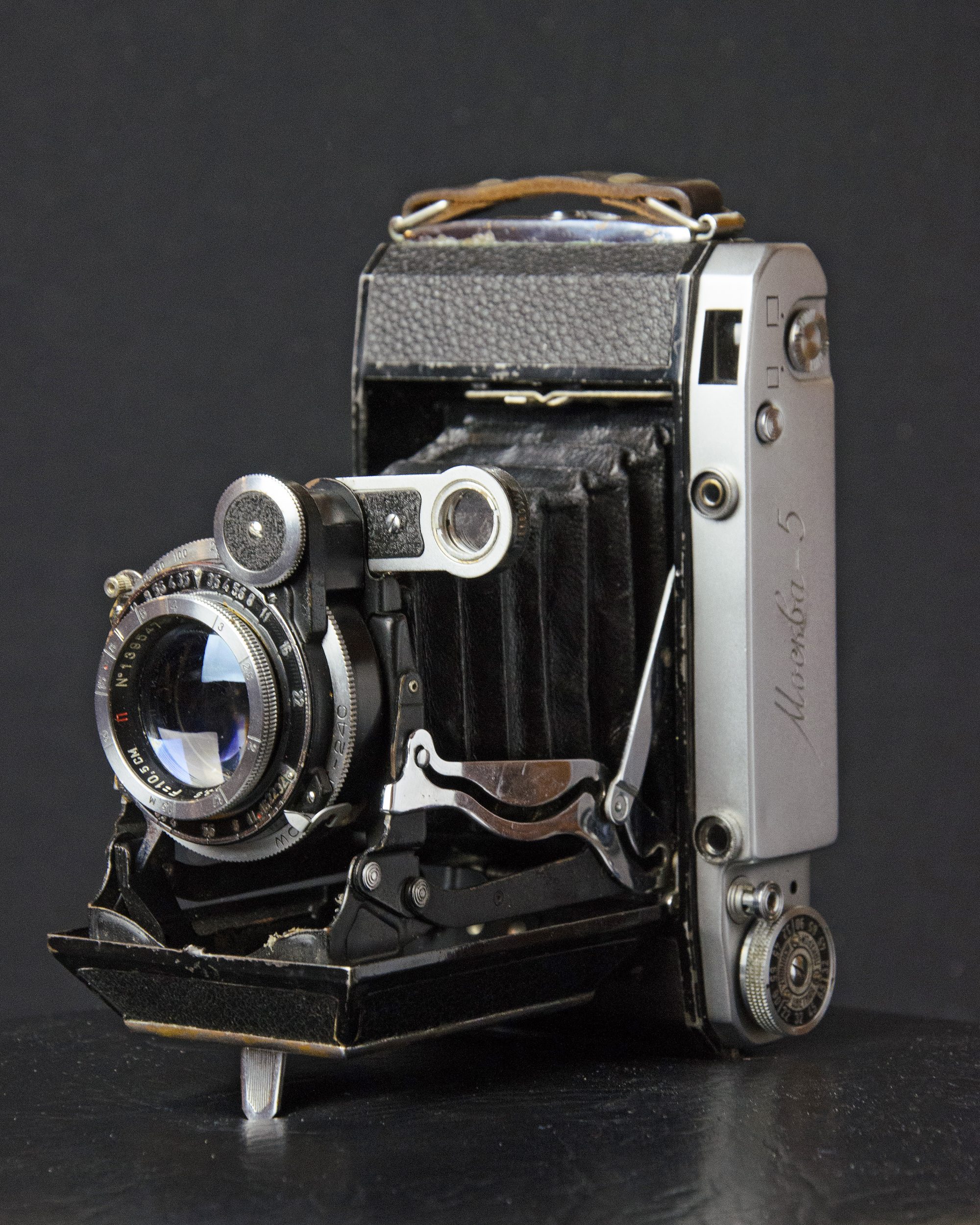 A dial on the top deck masks the viewfinder for 6×6 framing, but my camera came without the necessary 6×6 film gate insert, so I will never use this feature.

I discovered many issues had to be addressed to get good performance. Let me state upfront that I’m not skilled at camera repair and my makeshift solutions will make some cringe. I read a lot about light leaks from around the red window, so I removed the pressure plate and applied some foam around the red window for 6×9 indication. The first test roll revealed no light leaks, but many short fine scratches on the emulsion side of the film. I attributed these to pitting of the rollers. I managed to remove the rollers and polished them with some emery paper. That fixed the problem.

The latch for the folding door didn’t catch securely, but on the other hand, the bellows do not apply too much force trying to push open that door, so a little bending of the latch got it into “good enough” shape to stay closed.

Thank goodness the Moment-24C shutter speeds seemed fairly accurate and the shutter was not sticking, because my track record with shutter repair is abysmal. However, the shutter would sometimes not stay cocked and would release on its own. I discovered that I can prevent this by applying some outward force, in the direction away from the camera, while cocking the shutter. While experimenting with this fix, I managed to break the self-timer button off. To me, loss of a self-timer is not such a bad price to pay for a working shutter. You win some; you lose some.

The focus was off on near-distance photos, and I discovered that the front cell was taking the middle cell of the lens with it during focusing. On these cameras the focus is supposed to be set by only the front cell of the lens moving. I removed the focus-scale bezel which is attached by incredibly small brass grub screws, screwed the middle cell more securely into the body and lubricated the front cell threads. This fixed the problem, but in going back and forth trying to get the bezel scale to agree with the rangefinder and the actual focus, I managed to strip the grub screws, and when I finally jammed the bezel back on, it was on for good after that. You win some; you lose some.

Despite the focus-scale problem, I can focus accurately using the rangefinder; it’s just that the scale does not read the true distance. Infinity is achieved with the scale showing 8m.

The biggest problem, by far, is that the lens was clearly not parallel to the film plane. In this photo of my comrade neighbours on their way for a ski, taken at f8, their faces are in focus, but their feet are not. 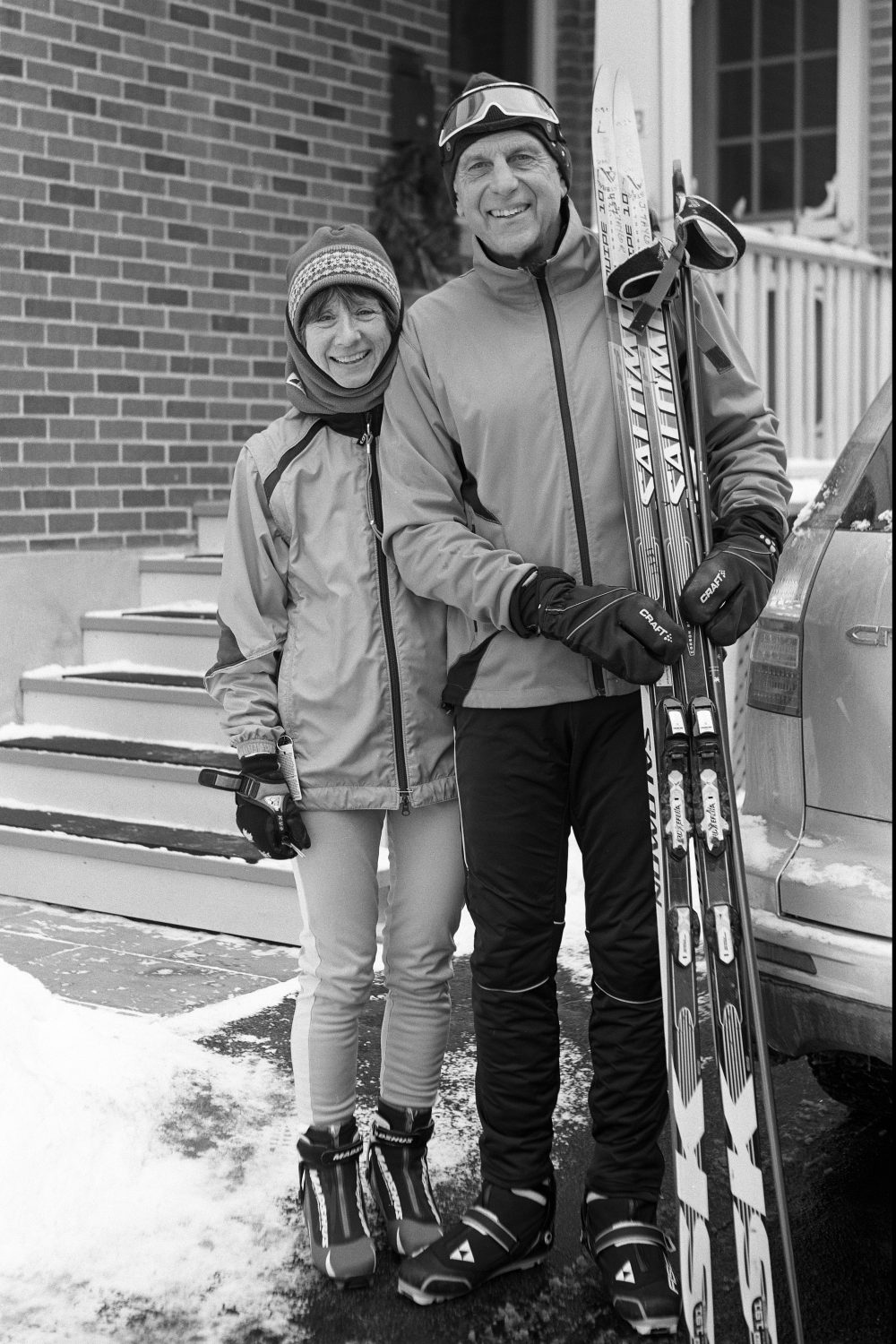 I read that lens alignment is a common problem with the Moskva-5. It seems that nothing but the springiness of the bellows keeps the front standard in place. Even after it snaps into position, the lens can pivot freely.  In the end, I put a dab of hot glue on a particular spot on the struts to stop the pivoting  in the right place. It took two rolls of film to get it just right.

But when it’s just right, it’s really right! I took the camera out in the brutal central-Canadian winter for some walks around Ottawa. The shutter was fine at 1/100s and 1/250s despite the sub-zero temperatures. I’m impressed by the contrast and resolution of the coated Industar 105mm f3.5 lens which is of a Tessar formula. My philosophy is that 6×9 gives you a big negative, so don’t worry about grain, use fast film, and stop way down to minimise imperfections. All my photos were done on Ilford Delta 400 at box speed, between f8 and f25, and developed in D-76 1:1. 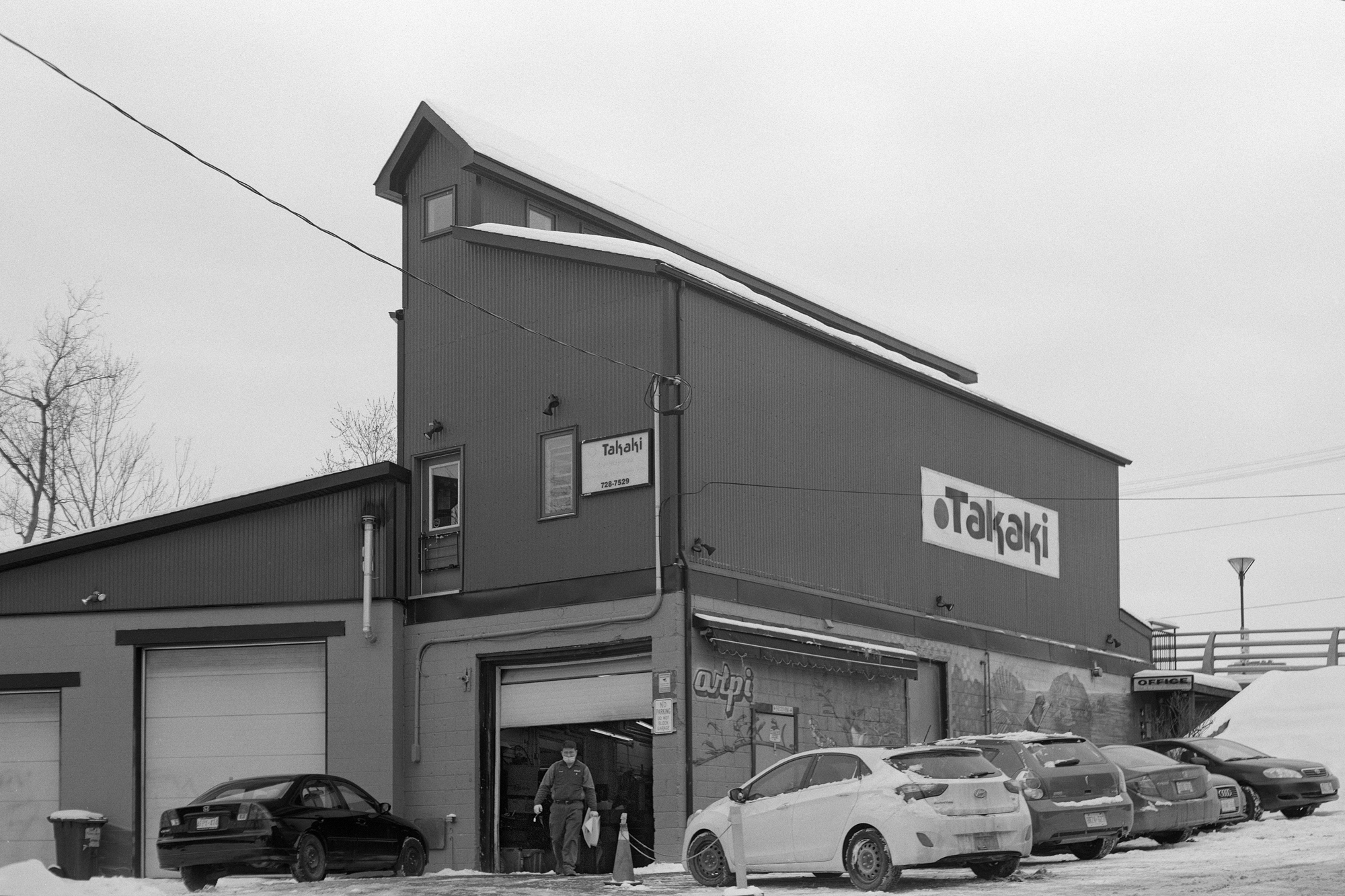 The first day out was overcast and yet this shot of the Takaki auto garage, something of an architectural icon in Ottawa, showed no flare, despite shooting at f8 without a lens hood (see above). I returned to Takaki on a sunny day and the result looks very snappy (Figure 4). 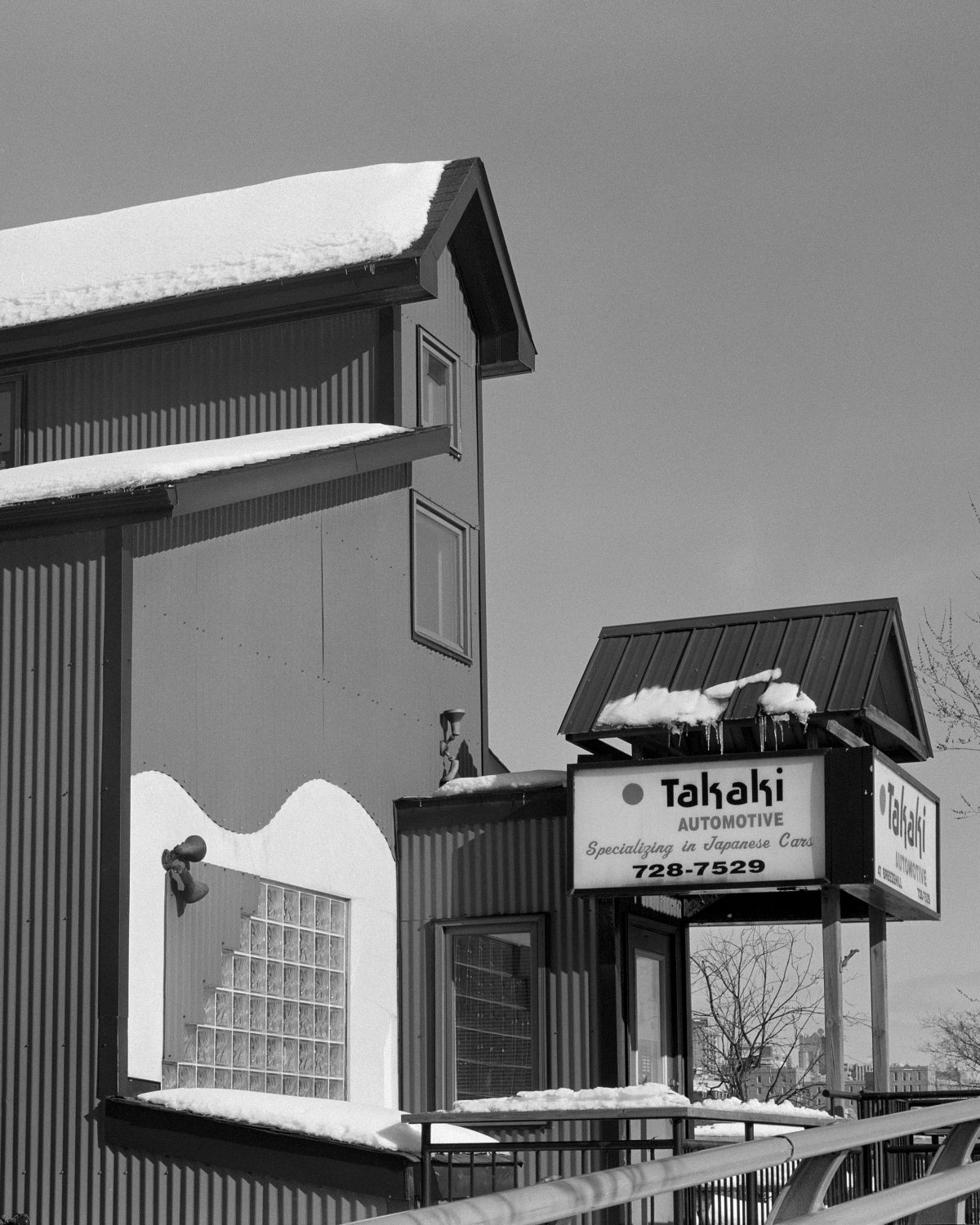 Another architectural shot of the west block of the parliament buildings is very sharp throughout. 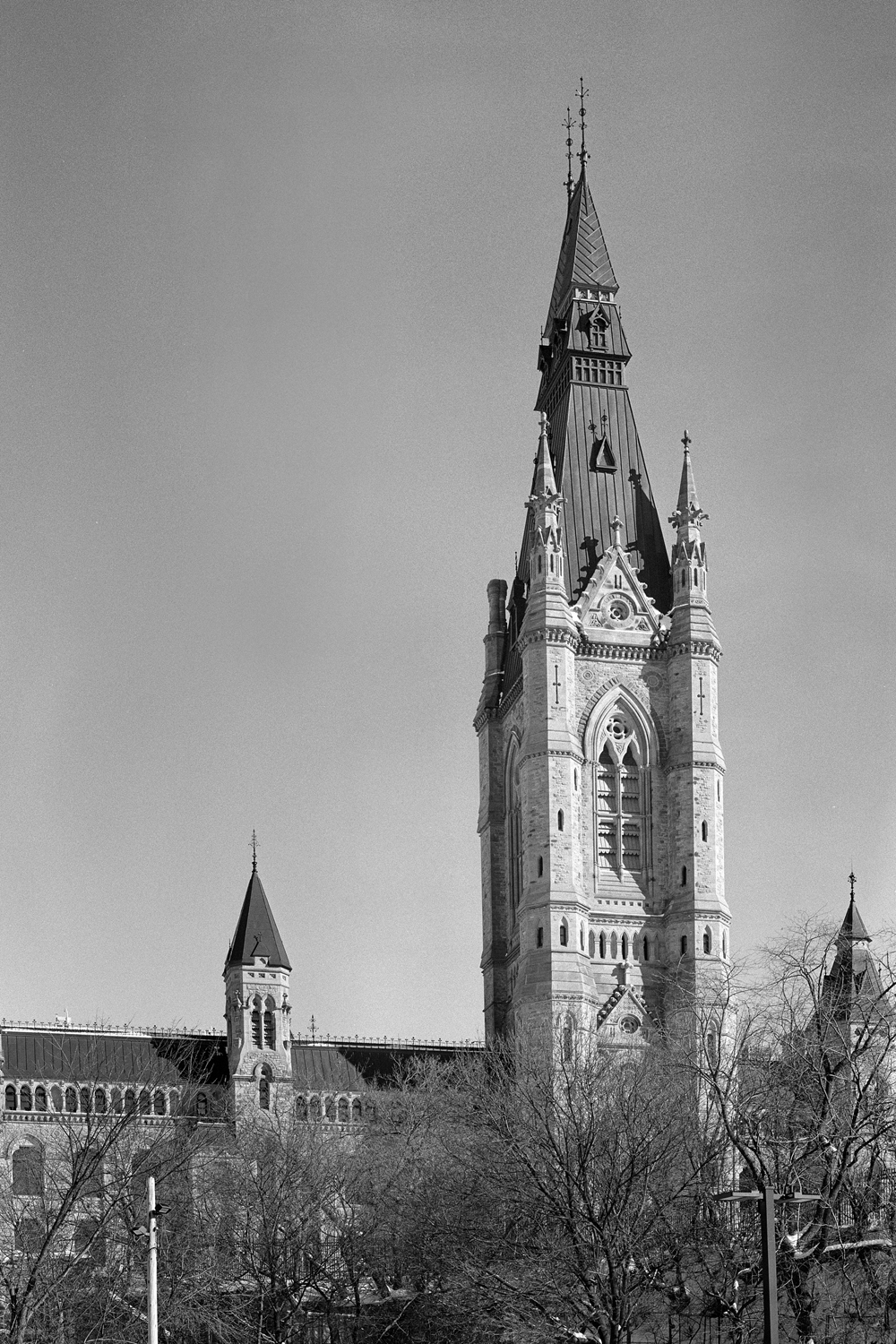 To the west of parliament, the Chaudiere dam and hydroelectric station sits in the Ottawa river between the Ontario and Quebec sides. This photo was somewhat backlit, but the lens, again without hood, shows no flare (Figure 6). 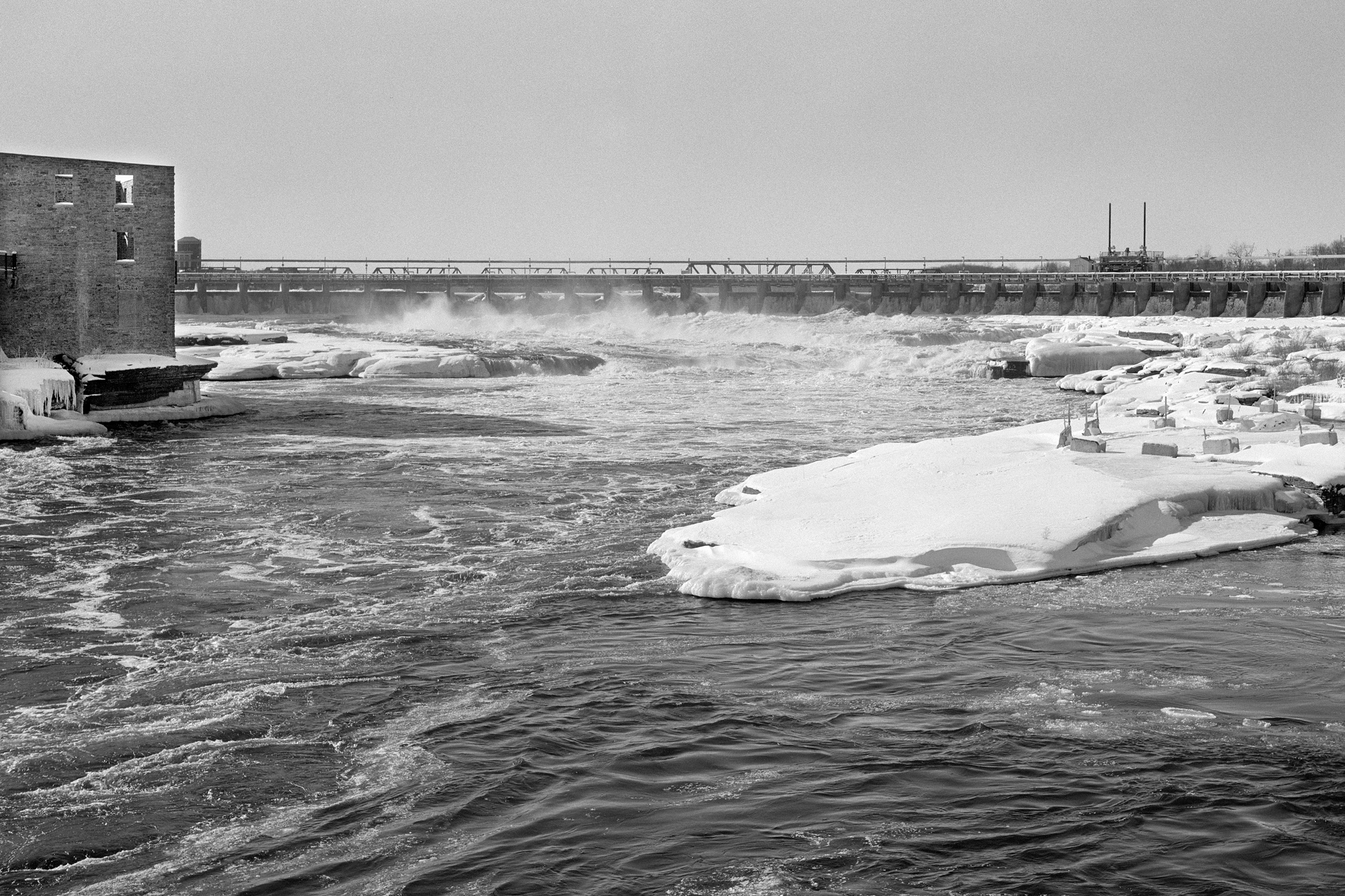 In recent years, snowy owls have been migrating south to the farmlands around Ottawa during the winter, and they have become a popular photographic subject. Although the Moskva-5 is no wildlife camera, I used it to photograph one of the owl hunters. The camera is very suitable, however, for photographing the shapely snow drifts that accumulate next to the farm roads. On the way home from the farmlands, I photographed a grain elevator aswell. 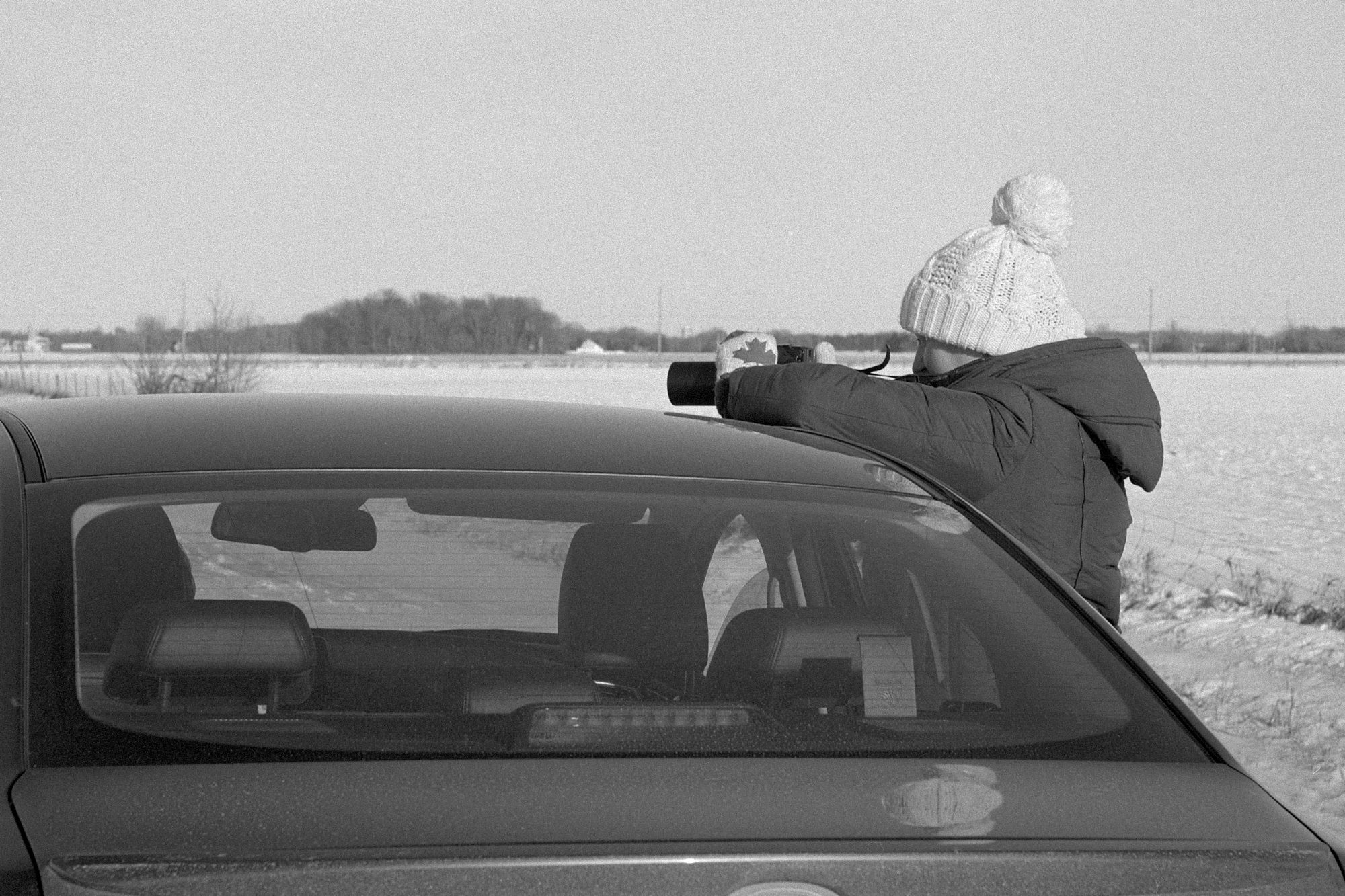 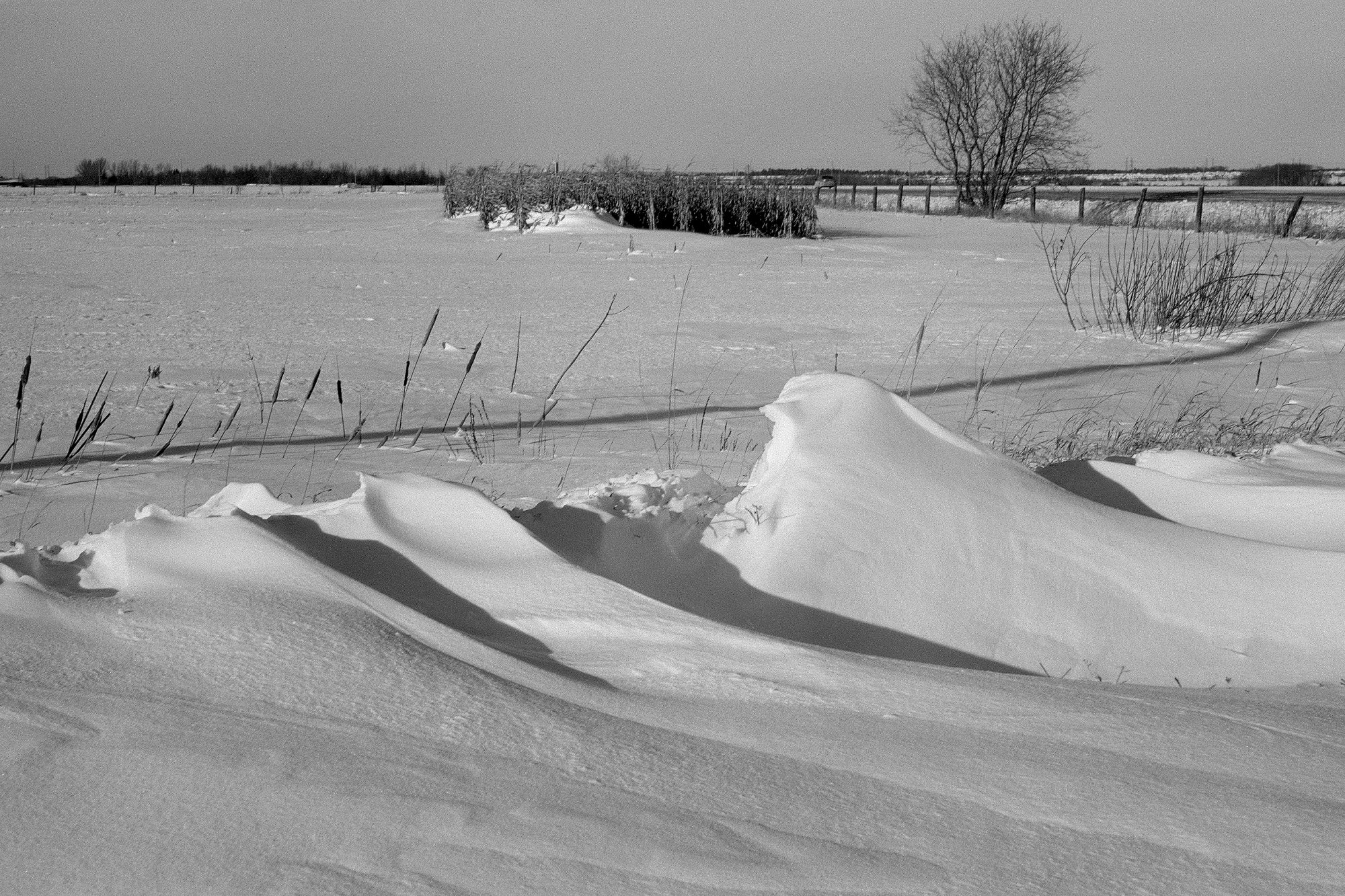 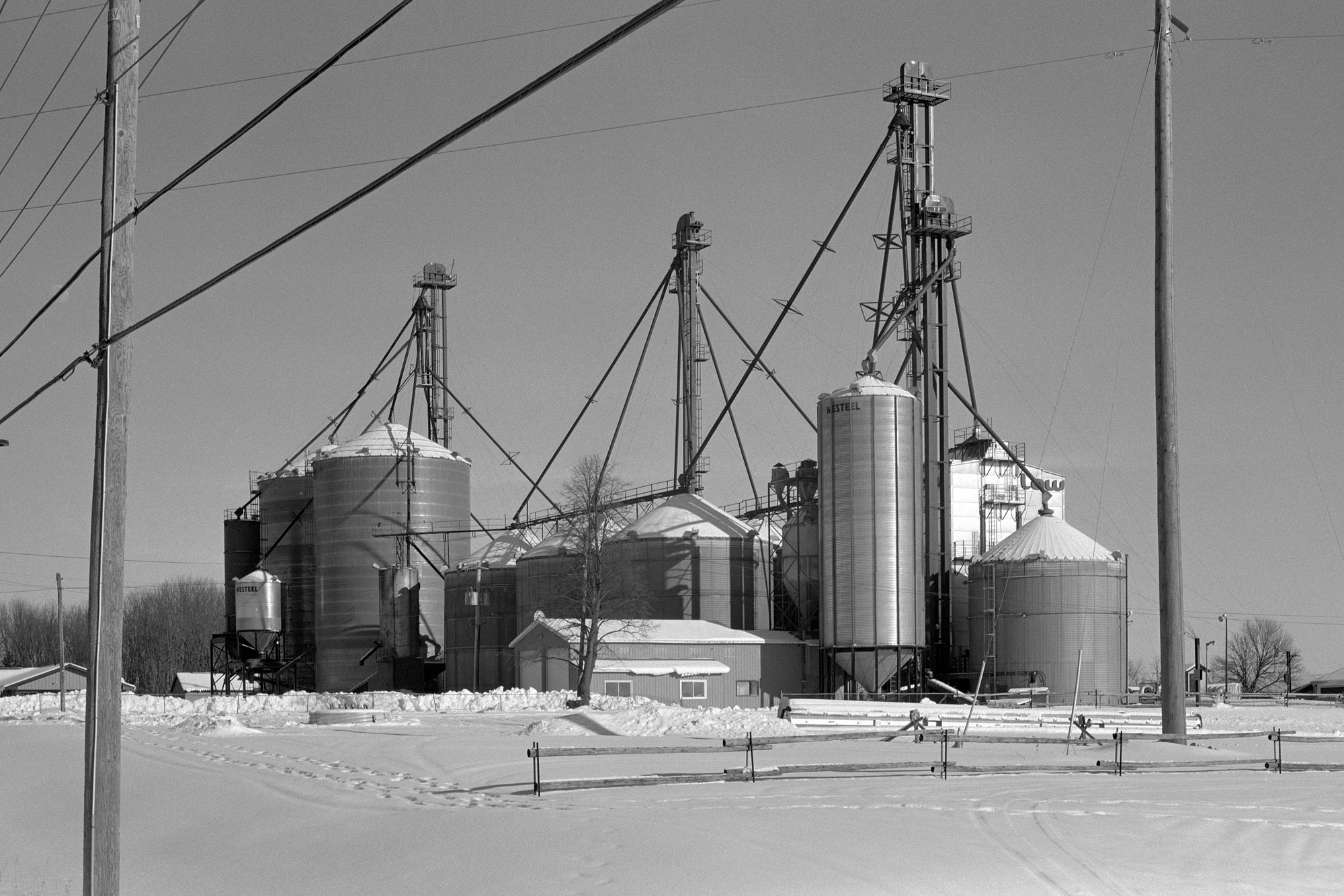 So while my particular Moskva-5 needs some babying to operate correctly, I’m impressed with the results it can deliver.

I was lucky to get one in great condition, working properly – not often the case. Really a sensational performer – for a fraction of the ‘real thing’ price. For a while I took it everywhere

Nice review. My Mockba 5 works great, apart from a weird quirk that seems to be common. If I shoot it at 1/250 I get camera shake. Apparently it causes a weird harmonic in the camera. At 1/100 no shake.. So that it the top shutter speed that I use, unfortunately. This camera really does suffer from parallax framing issues. You really have to give it framing guestimation/windage to estimate where it should be pointed for correct composition. This is because the viewfinder is so far away (and on a big camera) from the lens axis. Pic of mine. I… Read more »

I read about the 1/250s speed causing vibration, but my 1/250s handheld shots were sharp.

I think I’ll run a test roll through mine, and shoot a variety of scenes in a more controlled situation at 1/100 and 1/250, and compare them. I’d love to be able to use the 1/250 setting, but haven’t because of the resultant lack of sharpness. This way I can be sure it wasn’t sloppy handling on my behalf!

Nice series of captures. As mentioned in previous articles, to get the best out of Soviet gear, have them serviced . . . or buy from a reputable seller at the start.

This camera has been a real learning experience for me (first folder, first rangefinder, first medium-format, first external metering). I purchased it from Yuri at Fedka, and it came in great shape; I even got the 6×6 mask. Does anyone have any tips for keeping it steady when hand-held? I saw some advice about framing with the camera held upside-down then holding it against your forehead for stability. It takes wonderful shots on a tripod with a remote release (and a modern speedlite to boot!). It forces me to keep an exposure journal, which I have been reluctant to do… Read more »